Expertise consists of detailed knowledge and experience in a field that permits you to undertake successful actions. An air conditioner repairman, a surgeon and a financial engineer are all examples of expertise, along with endless others. No reasonable person would argue against the need for expertise in the world. The questions, however, are whether expertise has limits and whether excessive dependence on expertise to solve problems and manage human affairs might be at times insufficient and even harmful.

This is not a strange philosophical discussion but a very practical matter. In the field that I am interested in, geopolitics, there are those who claim the title of experts. Indeed, they are experts in terms of education and experience in government offices, think tanks and universities. They lay claim to knowledge of relationships between nations that is superior to those who lack their education and experience. Their reasonable claim is that they should be relied on to manage U.S. foreign policy. Their counterparts in other countries make the same claim. Without challenging their expertise – which is self-evident in most cases – the question is whether expertise in a field is a basis for trusting the expert with important things like foreign policy and air conditioning.

Plato asked if a physician who does not cure his patient ought to be considered a physician. His answer was no. Plato’s point was that the test of an expert is achieving the end to which expertise is intended. If he fails, he is no expert. The goal of an air conditioning repairman is obvious – fixing broken air conditioners. But what is the end to which foreign policy experts aim? The answer, obviously, is to conduct successful foreign policy. But while I know what a working air conditioner looks like, I don’t know – or at least don’t know beyond challenge – what good foreign policy looks like. In hiring foreign policy experts it is hard to measure their expertise because the end is uncertain. 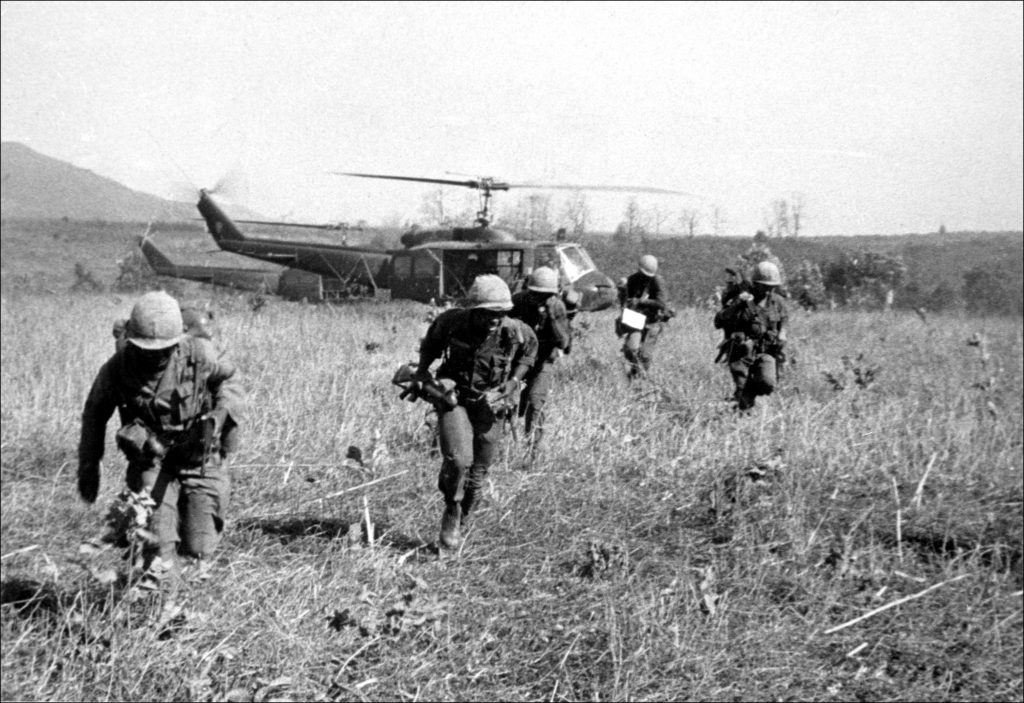 Going back to the beginning of the Vietnam War, a cadre of experts served under President John F. Kennedy, and then President Lyndon B. Johnson. They included the top tier, such as Robert McNamara, Dean Rusk and Walt Rostow. Serving beneath them were hundreds of others, each an expert in a fragment of the problem they were dealing with. David Halberstam named a book after them: “The Best and the Brightest.” These were graduates of the best schools with ample experience in the areas of knowledge that fragmented into smaller and smaller areas of importance requiring increasingly narrow and focused expertise. Along with them, the leadership was able to draw on experts from the oddly named “think tanks,” including the mother of all think tanks, the Rand Corporation.

These people’s training, polish and even brilliance were the foundations of their expertise. Together they collaborated as experts can in designing the Vietnam War. Each knew a tremendous amount about something. None knew the entirety. The presidents, sitting alone among their advisers, had to make the fundamental decision: Should the United States go to war in Vietnam? Experts in Vietnamese culture, crisis management and logistics provided their opinions. But while they were experts in their fields, they were no more qualified to answer the questions of whether the war should be waged, and to what end, than a plumber. The decision to go to war required expertise, but above all, it required an intellectual quality that was quite different: wisdom.

For example, the expectation of civilian experts was that once North Vietnam came under air attack, it would stop supplying the Viet Cong due to the pain being caused. From the point of view of experts calibrating risk and reward through complex regression analysis, this was self-evident. To devoted ideologues seeking to unite their country and expel foreign occupiers, it made as much sense as Washington surrendering in the winter of Valley Forge. It took wisdom to understand the pain that someone fighting for what he and his colleagues truly believed in would endure. The air war was slowly escalated, giving the North Vietnamese time to adjust to the pain.

The failure of the experts was believing that they understood the enemy. They also wanted to win the war without great cost. They did not want tens of thousands dying on the battlefield, so they developed models. The models told them that troops would defend installations, Vietnamese forces would conduct offensive operations with special operations teams and bombing, and the North Vietnamese would capitulate. The reality was that unless the flow of supplies to the south was cut off, the war could not be won. Therefore, the port of Hai Phong and the bridges to China had to be destroyed. But that might bring in the Chinese and the Russians, and the planners didn’t want that. So, they invented a model of war that would not cost more than they were willing to pay.

I focus on Vietnam because it was long ago and some of the passions have died away. The experts planned the war, but they did not understand politics. They did not understand how enemies might behave, what the risks were, or what could go wrong. They lived in a frictionless world in which political reality was an unwelcome intrusion. This has not been unique to American wars since then. The experts could define an air campaign suited to war’s political ends and analyze enemy logistics or any of these parts and fragments of war. But the limit of their expertise was the sphere of the political. Therefore, they could not imagine their enemy’s passions. The failure to understand that passion, to realize the price of defeating it, and to adequately plan for it has been catastrophic.

In the American Republic, it is the politicians, elected by the people, who propose war. The founders were not only referring to the president. He, of course, is commander in chief and would wage a war, but the founders also required Congress to agree through a declaration of war. Since Korea, the declaration of war that had been fairly consistently part of war-making has been abandoned.

President Harry S. Truman was the first to go to war without a declaration, claiming that since the United States was by treaty a member of the United Nations, and the United States had decided to defend South Korea, a declaration of war was not needed. Since then, the declaration has not been used, although the United States since World War II has waged wars requiring substantial troop commitments for 32 out of the last 72 years (including Korea, Vietnam, Desert Storm and the jihadist wars). Resolutions have been passed, but they did not force Congress to assume the responsibility for war along with the president. There is some ambiguity as to what a declaration of war constitutes. Anyone who wants to do so can complicate a fairly clear reality. A declaration of war is the approval by both houses of Congress for a war to be waged. Whatever the ambiguities, the purpose of the Founding Fathers was for war to be declared by Congress unambiguously. That meant wars would be limited by political consideration, and when declared, waged by the country as a whole with no doubt as to commitment.

The decisions to go to war in those 32 years have been made primarily by the president surrounded by his advisers ­– his experts. The experts know many things, but their knowledge of the “big thing” – the price to be paid and the consequences of defeat – is no more than what you or I know. Most importantly, they do not know the American people as a president, senator or congressman does. They do not know their limits, their needs, or above all, their will.

To become an expert, one must become focused. To be focused, one must exclude the extraneous. The extraneous usually consists of people who don’t share one’s passions. The experts I have known (and I must include myself in this group) may have little interest or respect for anyone not credentialed to speak on a subject. A subject that does not require proof of expertise is not a significant subject. Experts dismiss the citizenry as a poor source of wisdom, hold Congress as a nuisance, and even treat the president with condescension, although not to his face. Expertise moves from being a tool of real, if limited, value to being a cult into which admission requires mastery of an art. In Washington, that cult rules. The deeper you go in the ranks, the more it demands conformity to the methodological idols that are worshiped.

The decision to go to war does not require expertise, but wisdom. It requires a deep understanding of the American people, which is more likely to come from a politician who attended a thousand barbecues than someone who attended a thousand seminars at Harvard’s JFK School of Government. Presidents who have clawed their way to the presidency and senators and congressmen who have held their seats for decades know far more about human nature than most experts. Therefore, they also know far more about how the enemy might behave if we wage war and how the American people might behave if we lose.

Experts are indispensable technicians. But those who hold themselves as strategists (including me) have not gained the wisdom of the grueling experience of being a plumber, an air conditioner repairman or a financial speculator. Experts have lived narrow lives, while politicians have lived broad ones. They’ve had to. A president making decisions alone with his advisers has frequently committed grave errors of judgment. Presidents who commanded forces in a partnership with Congress – and therefore the consent of the governed – have consistently done better and borne greater burdens. They could ask for President Abraham Lincoln’s last measure of devotion, knowing that it was not his will alone.

I suspect the decline of the declaration of war happened because during the Cold War, a nuclear exchange might take minutes. Presidents had only seconds to make decisions surrounded only by experts. But all of the wars waged since World War II left time for Congress to exercise its constitutional obligation. This does not mean the wink and nod of a resolution or a budgetary act, but rather a declaration of war. If war is too important to be left to the generals, then it is certainly too important to be left to my ilk and me. But more to the point, look at wars in which Congress issued a war declaration and those in which it didn’t. As an expert, I cannot help but see the difference.

This is not an attack on expertise. Knowledge of things smaller than the whole is essential. It is a defense of wisdom, and especially the wisdom of the founders, the people and their representatives. I suspect the wars since 1945 would have ended differently or would not have been fought had respect for the Constitution been maintained and had the experts been left to what they are good at: the vital lesser things.

Russia as a Developing Nation