Officially, the United States has 14,187 troops deployed in Afghanistan, Iraq and Syria – 9,800 in Afghanistan, 4,087 in Iraq and roughly 300 in Syria. If you include Pentagon statistics on various support staff and specialized forces, the number is around 17,050. And if you take into account U.S. Defense Department data on military contractors, the total number swells to 34,397.

So unofficially, the U.S. has a much larger force on the ground in these countries than it wants to admit. The reason the U.S. is obscuring this is because it wants to shape public perception about its successes – and failures – in its post-9/11 wars. 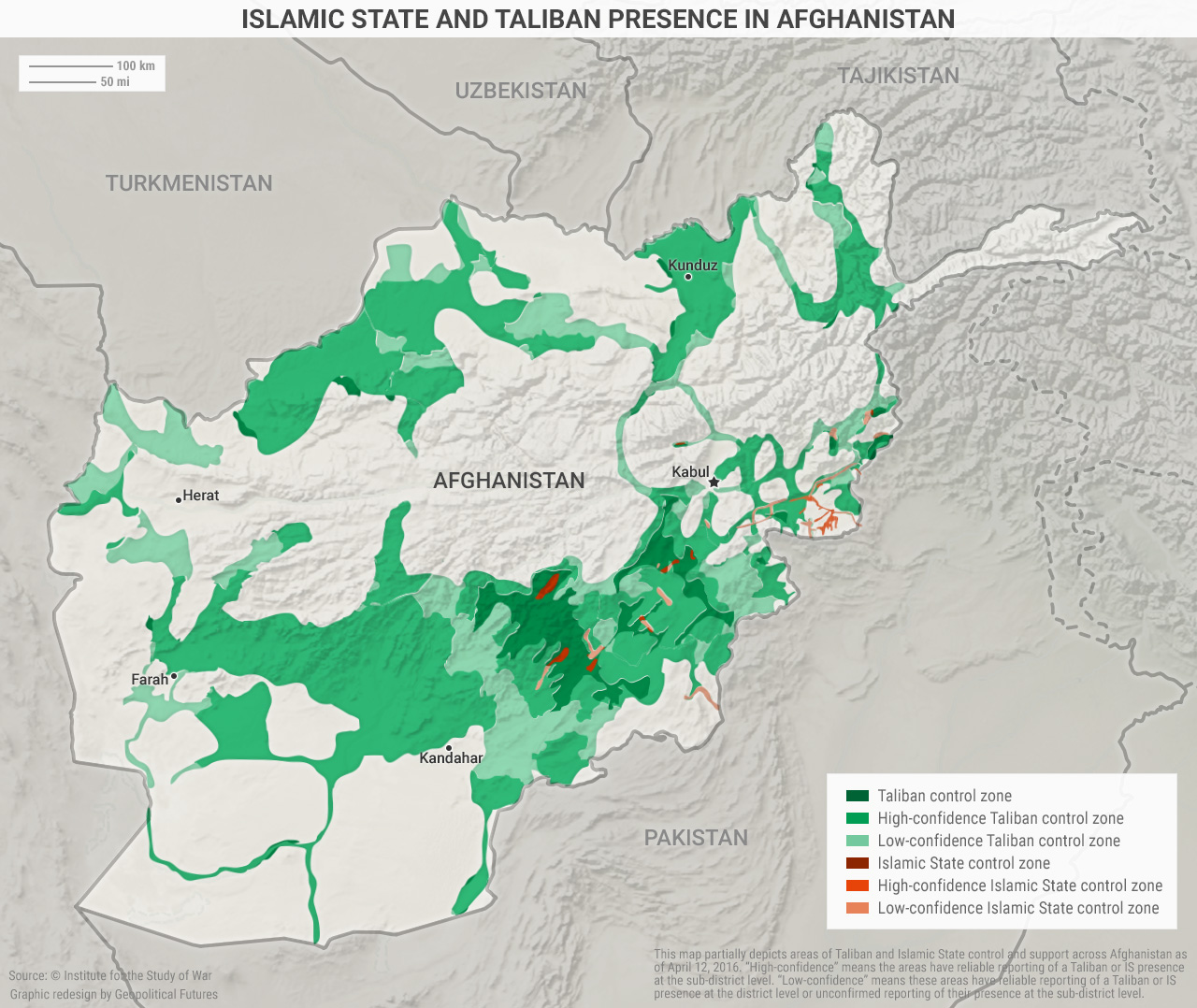 The next week, the Gulf of Tonkin incident occurred, and with the powers given him by the Gulf of Tonkin Resolution, then-President Lyndon B. Johnson rapidly increased the number of U.S. troops fighting in Vietnam. The number peaked at over 500,000 in 1968.

1968 was the same year as the Tet Offensive – which marked a turning point for the United States’ involvement in the war. As a result, LBJ was not re-elected, and Nixon took office. Upon taking office in 1969, Nixon put in place a strategy that came to be known as Vietnamization.

In this strategy, the U.S. began to withdraw its combat troops from the country. In their place, Washington hoped to expand, equip and train South Vietnam’s forces. When the North Vietnamese attacked in the 1972 Easter Offensive, which resulted in large numbers of casualties, the U.S. didn’t waver from its strategy.

The withdrawal continued and the Army of the Republic of Vietnam (ARVN) was left to manage the situation. The next North Vietnamese offensive in 1975, when no more U.S. combat troops remained, resulted in the collapse of the ARVN.

While it is important not to carry the analogy of Vietnam too far, the U.S. finds itself in a similar situation today as it did at the end of the Vietnam War. However, Afghanistan and Iraq are very different battlefields from each other as well as Vietnam, and each has different strategic priorities.

So despite the fact that both of these conflicts have been part of the U.S.’ larger engagement in the Islamic world since al-Qaida’s 9/11 terrorist attacks, we must analyze them separately.

The War in Afghanistan

In Afghanistan, the U.S. is in the midst of a larger drawdown. President Obama has admitted that he will not be able to wind the war down completely before he leaves office, as he had hoped to in 2008. As recently as October 2015, Obama said he hoped to leave only 5,500 troops in the country when he leaves office in January 2017.

And yet, despite statements about a desire to continue drawing down troops, the situation on the ground is getting worse in Afghanistan, not better. The Taliban control more territory in Afghanistan than they have at any point since the toppling of their regime in 2001. Their now-annual spring offensive kicked off in April, and their leader, Mullah Mansour, was assassinated by a U.S. drone strike in May, casting a pall over the potential for success in any U.S.-Taliban negotiations.

Then, last Thursday, the Associated Press reported that the Obama administration had decided to expand the authority of the commanders who oversee troops deployed in the Afghan theater. NPR reported that the White House directive has two key implications.

First, U.S. commanders are now authorized to order airstrikes to support major offensives undertaken by the Afghan National Security Forces (ANSF), provided the airstrikes will have a decisive effect. Second, U.S. troops can now be deployed alongside regular Afghan infantry forces (and not just Afghan special operations forces) for selective offensives, though U.S. troops are not to engage in direct combat with the Taliban.

On the surface, that does not sound like a U.S. military force that is about to withdraw from Afghanistan. But the reality is that 9,800 troops are not enough to defeat the Taliban and to pacify the entire country. At peak deployment, the U.S. had 100,000 troops in the country and they couldn’t accomplish these tasks, so it is doubtful that the U.S. has the military force necessary to achieve these goals.

The U.S. is now mostly involved in training and building local forces to take over the fight. So the statement leaked from the White House is meant to create a picture of U.S. military support of the ANSF without actually committing additional U.S. troops or even allowing the ones currently deployed to independently engage the enemy. Or, put another way: this is the Vietnamization of Afghanistan.

The U.S. will not say this outright and will delay admitting this as long as it can. But the situation in Afghanistan in which Obama finds himself (and which the next U.S. president will find him- or herself) is managing a defeat.

The War in Iraq

In Iraq, and by extension Syria, the situation is more complicated and the comparison to 1972 is less direct. (I include Syria when thinking about Iraq because the Islamic State, which is drawing the main focus of U.S. strategic objectives in the Middle East presently, is at its core a product of the second Iraq war.)

The U.S. pulled its last troops out of Iraq in December 2011. In June 2014, Obama ordered approximately 275 “U.S. Armed Forces personnel” to participate in the fight against the Islamic State. With the most recent announced increase in April, the number stands at 4,087 in Iraq, and approximately 300 in Syria.

In Iraq, the job of the U.S. was to manage the Shiites, the Sunnis and the Kurds so that all would participate in the reconstruction of the Iraqi state. The failure to do so and the resulting Sunni disillusionment played a major role in IS’ creation and acquisition of power.

The U.S. may technically have the capability to destroy the Islamic State strictly in military terms, but politically, deploying the necessary resources would be impossible. The original goal of establishing a liberal democratic Iraq as a U.S. ally at the most strategic point in the Middle East was never feasible in the first place.

Here too, the U.S. has neither the capability nor the will to subdue the various factions and reunify the country, and is only playing a supporting role to various militias and armies as they move against IS strongholds in places like Mosul, Fallujah and Raqqa.

The major difference between Afghanistan and Iraq is that the Taliban are not, at least currently, carrying out or claiming credit for terrorist attacks in Europe or the United States. They aren’t even called a terrorist organization by the U.S. The Islamic State, with territory in both Syria and Iraq, is.

The mass shooting in Orlando on Sunday will not by itself change U.S. foreign policy. But if IS, or someone sympathizing with IS, is able to carry out a terrorist attack on the level of 9/11 against an American target, the U.S. will have to decide what to do with troops it has already deployed within striking distance of the enemy.

The question then is: would IS success either on the battlefield or via a major terrorist attack play out more like the Tet Offensive or the Easter Offensive? Would it spur, or at least not delay, American withdrawal from the region or would it raise the ante? Here, the Vietnam analogy becomes less useful because the U.S. did not return to Vietnam years after leaving to help mop up unfinished business.

Our model says the U.S. does not want to intervene directly and is setting up a balance of power strategy to manage the Middle East. But we also recognize that IS is very strong and, left unchecked, could pose a sufficient enough threat to force the U.S. to do more than it wants to.

The Vietnam War is by no means a perfect comparison to how the U.S. will respond the Islamic State and the Taliban. For one thing, in both Afghanistan and Iraq, there are many more factions in each country that are fighting to achieve different goals. In Vietnam, there were two massive armies locked in battle and with powerful patrons backing each side.

Even so, as in 1972 in Vietnam, the current deployment of U.S. forces in these theaters is not strong enough to make a decisive military difference, and the U.S. has neither the intention nor the capability of inserting the kind of military force that would. Statements like the one that leaked from the White House last week are part of a public relations battle. Meanwhile, the future of U.S. interests depends on the U.S. capacity to rely on those with power on the ground.