A report last week stated that Chinese anti-ship missile systems locked onto a U.S. aircraft carrier in the South China Sea. It is not good manners to lock radar on a ship, as it means you could, if you chose, suddenly launch a missile. If the target gets nervous, it could launch first to take out the missiles. I cite this because there is much chatter about the possibility of conflict in the South China Sea. While I emphatically do not believe there will be a U.S.-Chinese conflict there, that assertion is incomplete without at least a cursory strategic analysis of how such a war might be fought. 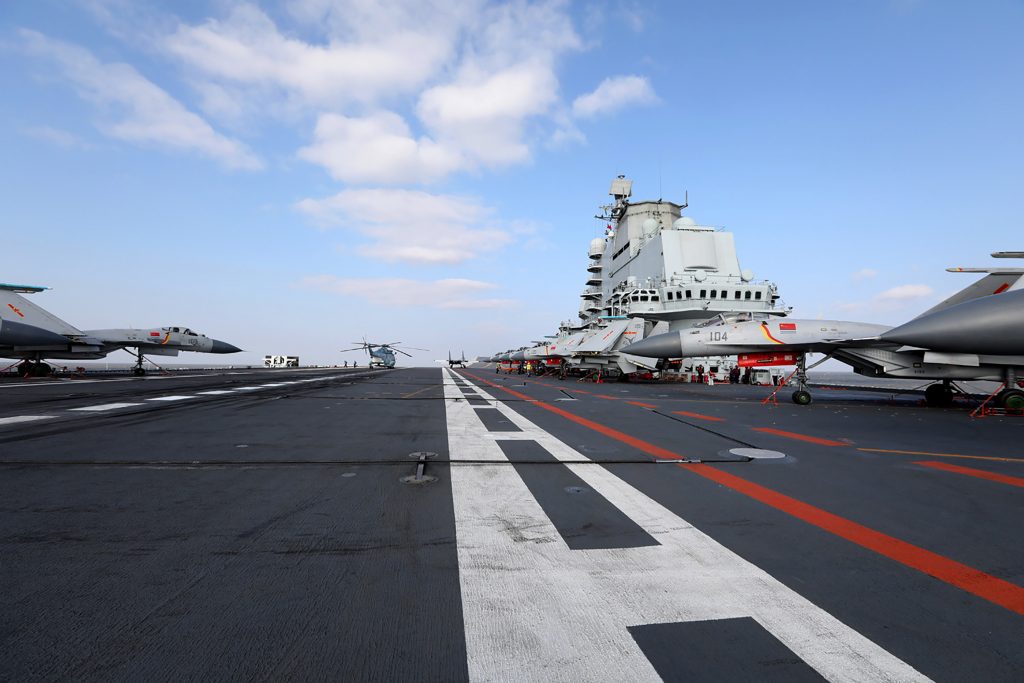 This photo taken on Dec. 23, 2016 shows Chinese J-15 fighter jets on the deck of the Liaoning aircraft carrier during military drills in the Yellow Sea, off China’s east coast. Taiwan’s defense minister warned on Dec. 27 that enemy threats were growing daily after China’s aircraft carrier and a flotilla of other warships passed south of the island in an exercise as tensions rise. STR/AFP/Getty Images

There are two scenarios. In the first, China invades Taiwan. In the second, the U.S. decides to block the exits of the South and East China seas, in order to cut China’s global maritime access. I intend to publish the Taiwan scenario today, and the blockade scenario tomorrow. I want to emphasize that these will be extremely high-level analyses, with vital details excluded.

The Chinese strategic motive for seizing Taiwan would be to open a wide gap in the archipelago running from Okinawa to the Strait of Malacca. The seizure of Taiwan, plus a few minor islands to the north and south, would open a substantial passage into the Pacific. As important, it would create a platform for Chinese land-based aircraft and missiles, which would force the border of the contested area in the Pacific east about 1,300 miles, bringing Chinese cruise missiles close to, or in operational range of, Guam and Anderson Air Force Base, a critical U.S. air base.

The oft-discussed Chinese strategy of placing underwater mines around Taiwan would not help for what the Chinese must assume would be an extended war. That strategy might cut trade, but Taiwanese and American aircraft could still use the island to stage operations against Chinese air, missile and naval targets. In addition, the U.S. response to mining might be to mine the areas around Chinese ports. It is a strategy in which the risks outweigh the benefits. Seizing Taiwan has higher risks, but a very substantial payoff in that it could solve China’s strategic problem of guaranteed access to the Pacific, as well as enhance its deep strike capacity in the Pacific.

Taiwan has about 130,000 battle-ready troops, with a reserve of about 1.5 million troops. They are equipped with about 2,000 armored fighting vehicles and substantial self-propelled artillery. Taiwan is a small country, and even taken by surprise, it would be able to amass its forces, if not to defeat the enemy on the beach then to engage them in mobile warfare to impose attrition on them. According to the 3-to-1 rule of combat, the Chinese would need to deploy at least 390,000 troops to defeat this force.

An invasion of Taiwan would mean amphibious warfare, in which the Chinese have no experience. It requires extraordinarily complex coordination between air, land and sea forces, and especially with logistics. As the U.S. learned in World War II, amphibious operations face this problem. No matter how lavish the supply of amphibious ships and landing craft, the number of forces landed initially is entirely incapable of defeating the defenders. The number of sea-to-land vessels and time of loading and unloading limit the buildup of forces. In other words, the landing area remains extremely vulnerable, particularly against a large, concentrated defense force.

Assuming that the landing area is secure and a large force could be built up, going on the offensive depends on supplies, and supplies depend not so much on ships as on offloading capabilities and the ability to move supplies to the troops. Forces in offensive operations against a peer enemy consume supplies at a staggering rate, and the Chinese would have to supply extremely large forces. During the battle for France in 1944, a lack of supplies could have defeated the Allies. The Germans were not the problem. We are very advanced these days, but we haven’t solved the problem of soldiers eating, artillery shells weighing hundreds of pounds or the need for more missiles. The Taiwanese would be operating on very short supply lines on well-practiced terrain. The Chinese would be operating at a distance.

Long before landing, the Chinese would be concerned with protecting ships in transit through achieving air superiority over the Taiwan Strait. This poses the classic problem of amphibious warfare. A battle for air superiority and attacking enemy bases would lose the element of strategic surprise. Undertaking air superiority operations after the initial assault could leave the landing force and their support vessels helpless. The Chinese don’t know what the U.S. would do, but they have to assume the worst case. And the worst case is a pile on by American aircraft and ship- and land-based missiles.

If the Chinese decide to attack Taiwan, they must protect the amphibious force and the logistical follow-on. They can only do that by achieving air superiority, and they can only do that by annihilating the enemy air and naval forces in a stroke. This is where surprise comes in. The first attack must follow the Israeli model in 1967. Israel executed a tactical surprise that annihilated the Egyptian air force in the first hour of the war. This gave Israel the ability to maneuver at will in the Sinai Peninsula. If the embarkation ports and amphibious and supply vessels sink, the war is lost.

For China to invade Taiwan it must open the war with an annihilating strike both against Taiwan and against U.S. naval forces in the region. The key would be the destruction of U.S. aircraft carriers. Assuming surprise, it is unlikely that more than two carrier battle groups would be in the Western Pacific. We must assume that the Chinese have already acquired long-range missiles sufficiently sized to significantly damage any warship and with terminal target acquisition systems that would recognize an enemy ship and hit it.

China must, in the first strike, destroy Taiwanese air bases and missile launchers, attack the two carrier battle groups that pose an immediate threat, and also attack both Guam and Diego Garcia – an island in the Indian Ocean where U.S. strategic bombers have been based. They must do all of these things nearly simultaneously to prevent warning. The Chinese know they can’t achieve this for two reasons. First, hiding an invasion is hard. The allies managed to confuse the Germans about where the invasion was going to happen, but there was no way they could hide the buildup. The Chinese might manage to confuse U.S. intelligence about the meaning of the buildup, as the Egyptians did with Israel in 1973, but there is no way to keep the United States from going on alert. That means air defense systems on the carriers and at Guam and Diego Garcia would be on extreme alert. In that case everyone, including the Americans and Chinese, would discover whether these systems actually work. China must also attempt to destroy American satellites and engage in complex electronic warfare to blind the U.S.

The Chinese do not expect such a strike to annihilate the enemy. The U.S. would expect losses. The crucial question will be whether U.S. forces have at least temporarily weakened enough so that Chinese air defense can protect the embarkation ports, the invasion force and the beachhead – as well as systematically cripple the Taiwanese army with intense airstrikes.

Assuming a crippling attack on all targets that reduces U.S. capabilities by 80 percent, the most extreme possibility, the U.S. would now rush reinforcements to the region, repairing airfields and sending all available carrier battle groups to redeploy at flank speed. In addition, U.S. submarines would flood the regions north and south of the Taiwan Strait, with Chinese destroyers trying to destroy them.

The problem that China has with an invasion of Taiwan is that too many things must go right. China must keep its intentions secret in spite of a prolonged buildup of forces in multiple ports. It must strike multiple heavily defended targets with aircraft and missiles, simultaneously and without being detected. It must execute an amphibious assault against a superior force and hold the landing area until reinforcements arrive. It must control the sea lanes across the strait in the face of submarine attacks, potential air attacks and mine laying. Finally, it has to complete the operation before the U.S. commits significant reserves to the battle. If any of these strategic components fails, the invasion fails.

Obviously, this is barely a sketch of the battle problem. Nevertheless, the strategic point is valid. The Chinese cannot take Taiwan without a Pearl Harbor scenario several orders more ambitious than the Japanese operation in 1941. The Japanese had a reason to risk Pearl Harbor. Their oil was running out and their supplies were running low due to U.S. embargoes and interference. They had to act. China is not in that position. Therefore, risking such a complex operation is not a rational option.

Tomorrow I will consider the issues involved in a U.S. blockade against China, and consider China’s responses when it is in strategic jeopardy.

Maintaining Perspective About US Adversaries

Explore the dynamics between the U.S. and its two biggest adversaries and learn what the U.S. must keep in mind as it crafts policy and responds to these countries with our free special report Maintaining Perspective About US Adversaries. Click the button below to claim it now!