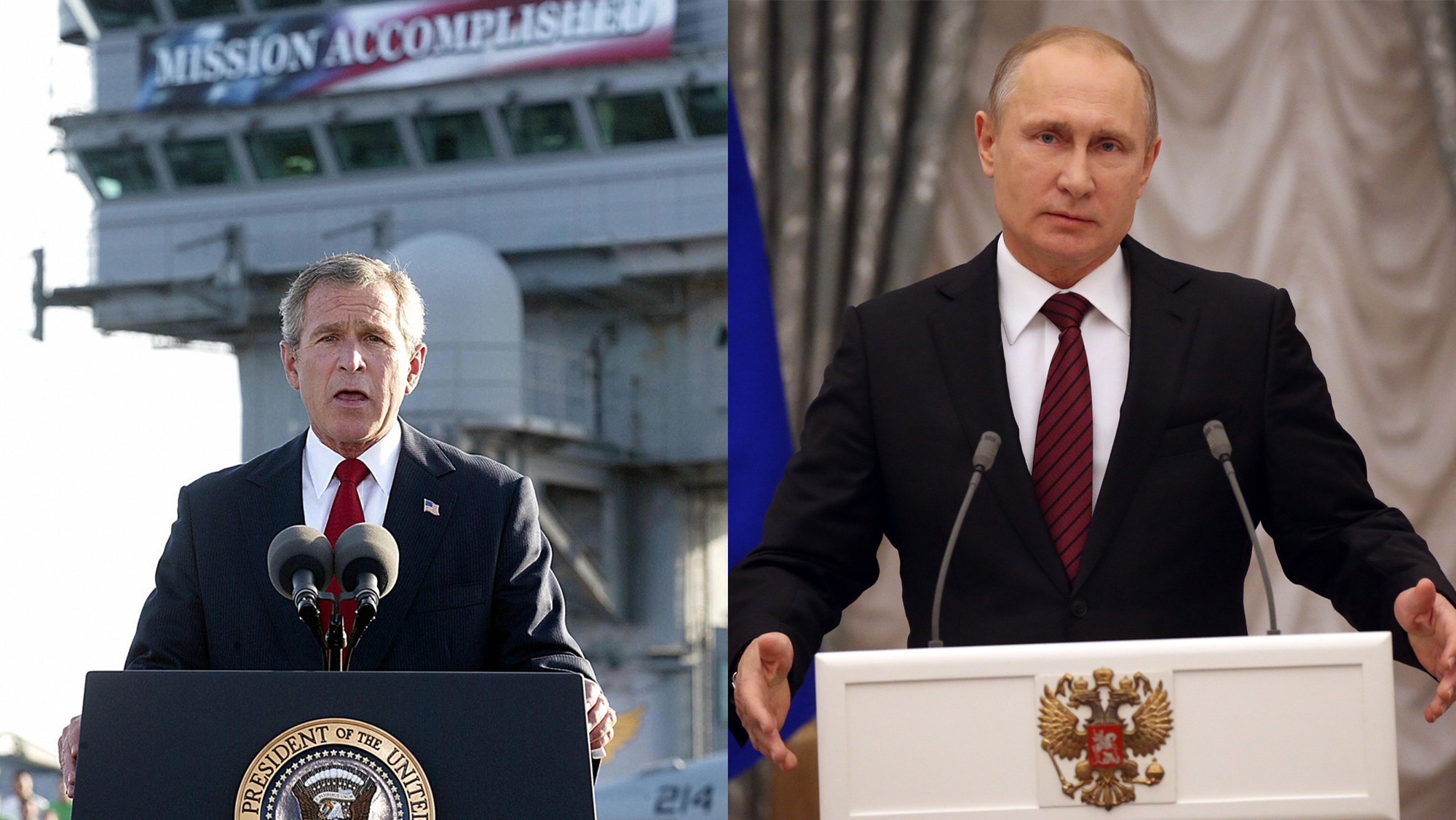 The day was May 1, 2003. Spring was giving way to summer in San Diego, California, in whose waters sat the USS Abraham Lincoln en route to its home port in Washington state. The carrier had just returned from the Persian Gulf, where it had been deployed to support U.S. combat operations in Iraq. Less than two months after hostilities began, then-President George W. Bush would declare those operations over. It was political theater, plain and simple, and the Abraham Lincoln was his stage. Behind the lectern from which he gave his speech hung a now-infamous banner that read, tersely, “Mission Accomplished.” Fifteen years later, U.S. troops are still in Iraq.

Bush’s “Mission Accomplished” moment is worth remembering now that Russian President Vladimir Putin has declared that Russia’s intervention in the Syrian civil war is over – and that he would soon withdraw Russian forces there. Granted, he said nearly the same thing in March 2016. But let’s assume this time he means it. It’s a good excuse to take stock of what Russia has – and hasn’t – achieved, and whether Putin can actually deliver on his promise.

Moscow can indeed claim some successes in Syria. The first and by far most important is how it improved Russia’s standing at home and abroad. Russia entered Syria from a position of weakness, having blundered through two major crises at home. The first concerned Ukraine, where a revolution brought to power a pro-Western government that Moscow proved powerless to stop. Russia’s impotence in Ukraine was a serious stain on Putin’s record. Putin had promised Russian strength, but he had not been able to deliver on this key Russian imperative – maintaining Russian control over the buffer zone that has saved Russia from foreign invaders many times over. So he did one of the only things he could do: He annexed Crimea, the Ukrainian peninsula that was already closely aligned with Russia. It was an act of provocation that earned Putin little but Western-led economic sanctions.

This is the context in which Russia entered the next crisis: the fall of the price of oil. Moscow had anticipated that oil prices would remain roughly $80-$100 per barrel and had budgeted accordingly. Caught off guard and concurrently reeling from economic sanctions, the government was forced to make a variety of budget cuts.  Some of these cuts to social services, education and pension funds set off protests in far-flung parts of the country.

Russia needed a distraction. Enter Syria, a long-time Russian ally that was in the throes of a rebellion. The United States, ever Russia’s straw man, had joined the fray in a vain and ultimately unsuccessful attempt to arm moderate rebels. With virtually no moderates to speak of, these arms made their way into the hands of jihadists, even those in the Islamic State. Yet, for all its equipment and sophistication, the Islamic State had no air force and so was vulnerable to attack from above. Russia thus began a campaign of airstrikes against the jihadist group, an effort that helped immensely in its eventual demise. That it also embarrassed the United States, which had inadvertently strengthened the Islamic State, was an added benefit.

But the airstrikes also served an important strategic purpose: preserving the Assad government, which gives Moscow leverage in its dealings with Turkey. Turkey had hoped that the insurrection in Syria would have installed a government friendlier to its interests than Assad’s. Instead, it still has an enemy on its southern border, one that Russia can use to contain Turkish expansion.

Most likely it will do so through political means. But if it chooses to contain Turkey militarily, then it will have a more seasoned army with which to execute the campaign. Limited though their presence may have been, Russian soldiers have gained much-needed experience since their last major campaign, the 2008 Georgian War, which they handily won but not for a lack of poor performances.

Perhaps most important is that the foray into Syria has made Putin appear strong at home too. And that makes all the difference in Russia. Like all countries, Russia has challenges it must contend with. But its challenges, unlike those of most other countries, become existential when the people lose faith in the government. When Russia entered Syria, Putin appeared weak. Now he appears strong. In this particular case, appearance is more important than reality.

And so Moscow, with the odds stacked against it, was at once able to confound the United States, rescue its ally in Damascus, damage the Islamic State, harden its military and improve its image at home – all for the small price of a limited commitment of air assets.

Russia’s successes, however, are less impressive than they first appear. The boost to Russia’s image is based largely on the Assad regime’s survival. If Russia withdraws and the Assad regime once again requires assistance, then Moscow will have to intervene again, thereby undermining Putin’s claims that the mission is, in fact, accomplished.

Though the Assad regime has survived, Syria itself has not. It is a broken country that will be extremely difficult, if not impossible, to reassemble. The ethnic and sectarian differences are simply too profound. Assad’s government consists of Alawites, members of a sect of Shiism who have always been a minority in their own country. The majority of Syrians are Sunni Arabs, and from this disenfranchised Sunni Arab population the Islamic State was able to recruit its fighters. It’s unclear whether government forces will be strong enough to police the Sunnis. Then there are Syria’s Kurds, who, in the chaos of the civil war, carved out a sizable tract of territory for themselves. They do not want to give these lands back, and the Syrian army likely can’t make them. The Assad regime may still be alive, but it governs much less territory than it used to.

Russia has tried to engineer a diplomatic solution to the conflict by gathering everyone in Sochi. Its efforts run parallel to the Astana talks, the occasional meetings where Turkey, Iran and Russia plan for Syria’s future and coordinate operations. Nothing has come from Russia’s efforts. Russia, Iran and Turkey all have different visions for Syria’s future. Russia wants an independent Syria that can curb Turkish power. Turkey wants stability on its southern border, but it does not want the gains made by Syrian Kurds to embolden its own Kurds in their search for autonomy. Iran wants Syria to be its proxy state so that it can project power all the way to the Mediterranean.

In short, Russia can’t fix Syria, and there is no diplomatic solution in the offing. As a matter of fact, the countries with interests in Syria can’t even agree on who should pay for its reconstruction. It’s generally not a sign of good things to come when a country has to rely on foreign powers to rebuild; it’s a sign that the conditions for national healing are absent and that the Assad government will carry on, business as usual, taking donations where it can.

Russia’s Middle East policy depends on Moscow’s ability to convince the world it is more relevant than it is. The policy has artificially inflated Russian strength and has enabled the government to shape the region to its liking. But the Middle East just got much more complicated. The Islamic State had given erstwhile competitors a common enemy to fight and thus to cooperate against, if only temporarily. Now that the Islamic State is all but defeated, traditional rivalries will return to the fore. Russia’s relationship with Turkey, already difficult, will only get worse. Its relationship with Iran, friendly for now, won’t last. The more powerful Iran becomes, the more nervous Russia will become. 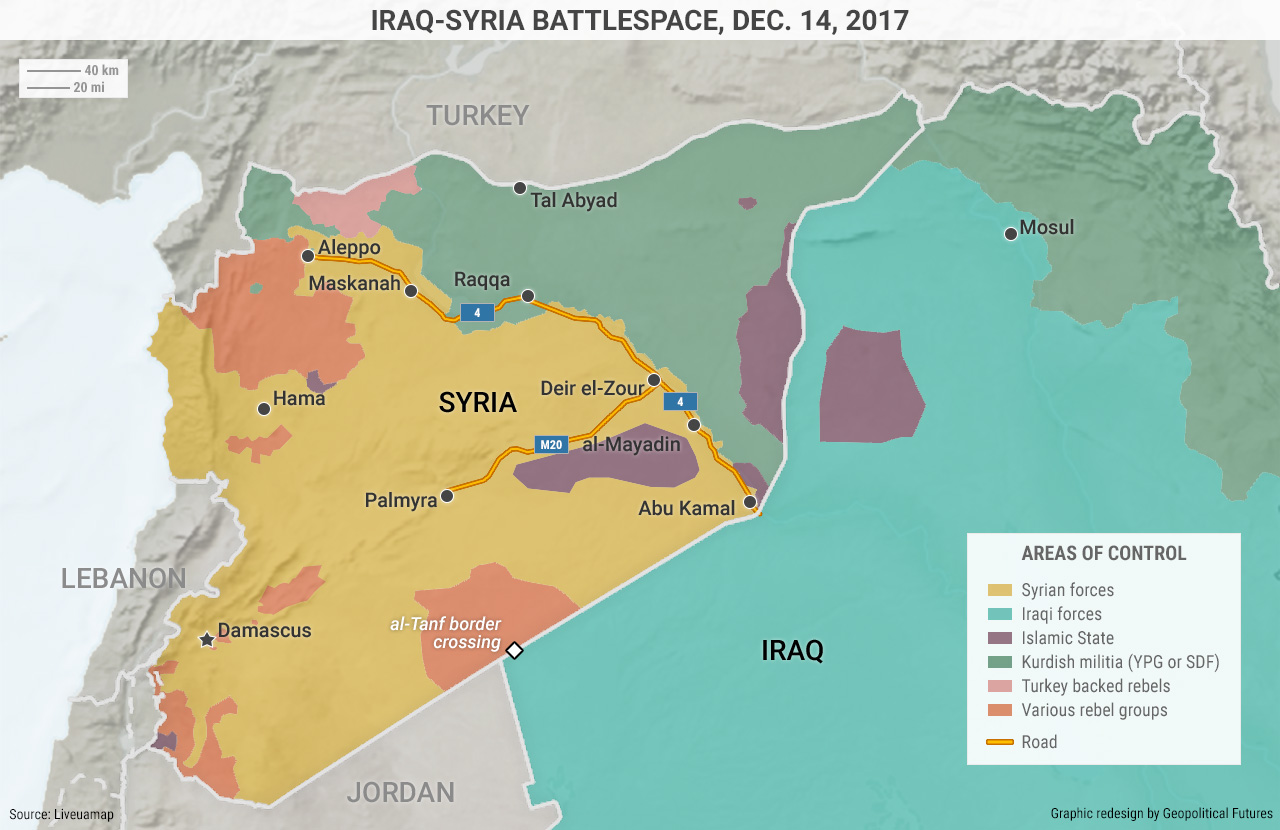 As the region evolves, so too must Russian policy. The country’s primary strategic goal will now be to create parity between the region’s major powers. If no country is strong enough to dominate the region, then no country is strong enough to challenge Russia. To the extent possible, the region’s Islamic fundamentalists must be confined to the region. And to the extent possible, Iran and Turkey should be more concerned about each other than about competing with Russia. But this need for parity will contravene Putin’s primary domestic political imperative: appearing strong during tough times at home.

Syria’s future is a perfect case in point. None of Russia’s successes in Syria have enabled Moscow to solve the domestic problems that precipitated its involvement in the first place. The conflict in Ukraine remains frozen. Oil prices have rebounded modestly but are still lower than Moscow would prefer. And while Russia’s economy has stabilized, there have been periodic anti-Putin protests. But Russia does not want to get bogged down in Syria and so is looking for an exit strategy that preserves the image of Russian heroism. If hostilities resume – a likely scenario – then they will undermine Putin’s presidency just in time for national elections, which is why he chose to announce an end to operations now in the first place.

The elections alone are reason enough for Putin to make this his “Mission Accomplished” moment. He needs to show how strong and effective he still is. In the Middle East, though, success is fleeting. Today’s achievements are tomorrow’s failures. Such is the case for Russia. It can spin future failures later. For now, it got what it wanted – everyone thinks Russia is powerful – and that’s all that matters.