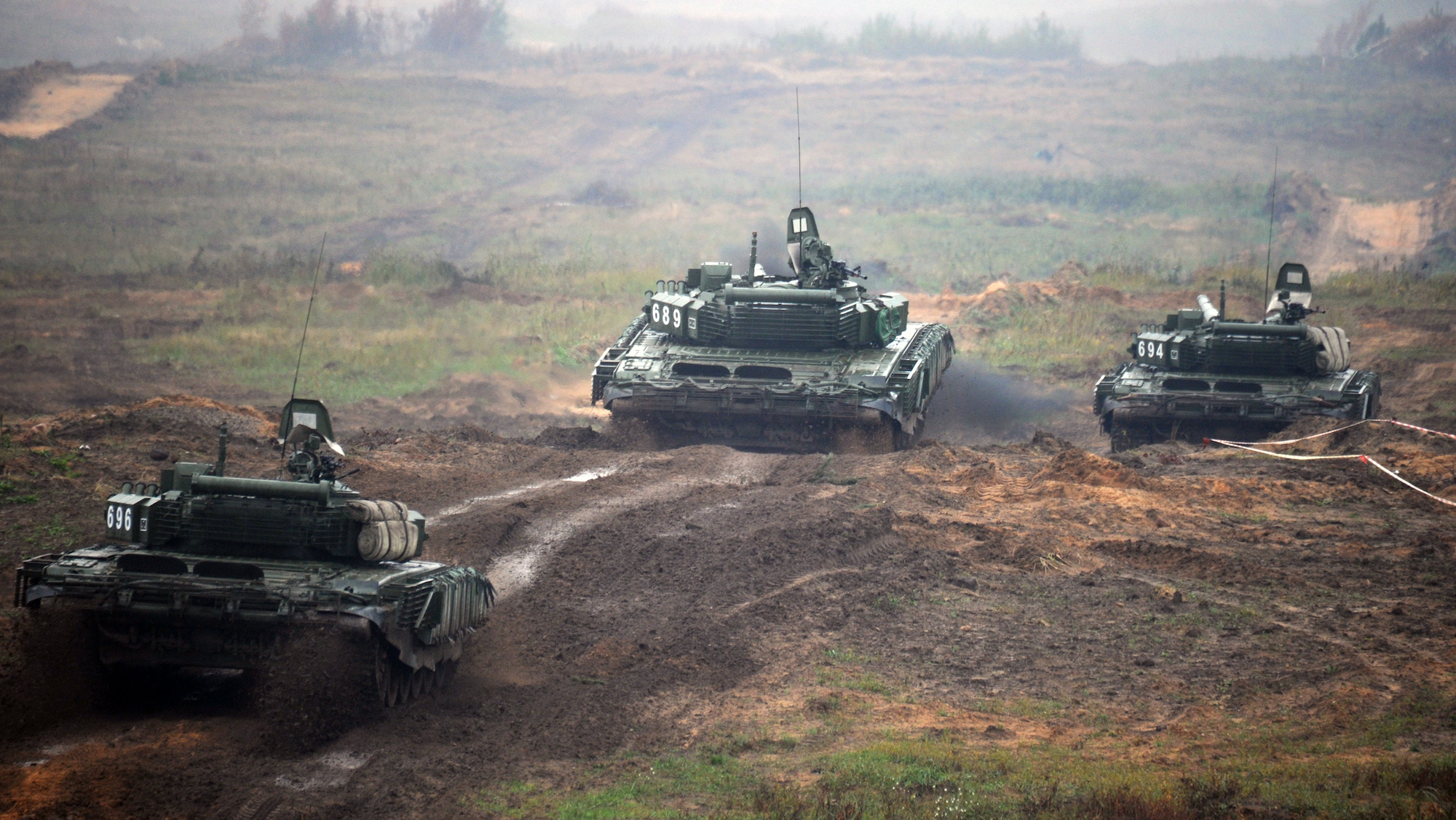 The Trump administration came to office hoping it would be able to find a more cooperative basis upon which to work with Russia than previous U.S. administrations had. Of course, the Bush administration and the Obama administration tried to reset U.S.-Russia relations as well, to no avail. Less than a year into Donald Trump’s presidency, it is already evident that not only has the U.S. failed to change the tenor of relations with Russia, but the relationship has worsened. As recently as March, a spokesman for Russian President Vladimir Putin suggested that the two sides were involved in a new Cold War, and after new sanctions were levied against Russia in June, Moscow promised retaliation. That retaliation is beginning to take shape.

The U.S. is the lone global superpower. On the one hand, that is a reflection of the tremendous economic and military might the U.S. can bring to bear. On the other hand, it means the U.S. has to take on many more problems than most countries do. This is a vulnerability, one that Russia can use to its benefit to try to push back against what it sees as a United States that is encroaching needlessly on Russia’s sphere of influence. As we look at Russia’s highly varied and extremely active foreign policy moves of the past month, it becomes clear that Russia is trying to use that vulnerability against the U.S., interfering where it can to gain leverage to disrupt U.S. strategy in other parts of the world.

The most prominent area where the U.S. is focused right now is North Korea. Russia can’t shape events on the Korean Peninsula, but it can try to prevent the U.S. from reaching any kind of resolution that Washington would consider a strategic success. In August, Russia donated some 800 tons of grain to North Korea. During the first week of September, right after Trump accused South Korea of appeasement, South Korea’s president traveled to Russia for a multinational forum and, in a joint press conference with Putin, said Moscow and Seoul saw eye to eye on how the North Korea nuclear issue could be solved. In the U.N. Security Council, Russia has joined with China to limit the efficacy of sanctions, and it has gone out of its way to respond to some of Trump’s incendiary comments on North Korea, publicly questioning whether U.S. allies like South Korea and Japan ought to trust the U.S. any longer. Not to mention the many high-level meetings that have occurred between North Korean and Russian diplomats.

Russia just this week held naval drills with China in the Sea of Japan and the Sea of Okhotsk. These naval exercises are the second part of China and Russia’s 2017 Joint Sea Program, and as they took place, the U.S. and South Korea were carrying out naval exercises of their own in the region. Military exercises in and of themselves don’t mean much geopolitically speaking, and there is still a great deal of distrust between Russia and China. It’s not like Moscow and Beijing are entering into a formal alliance. That said, Russia and China share an interest in weakening the U.S. position on the Asian mainland, and there are things they can work together on to do just that. The U.S. and South Korea have held joint military exercises for decades, but that didn’t prevent North Korea from developing nuclear weapons. Chinese and Russian naval exercises in this part of the world at this particular moment are a powerful signal to the region that there is more than just one game in town.

Consider also Russia’s activities in more far-flung and less geopolitically relevant parts of the world. Russia has cultivated a relationship with Venezuela going back to the times of Hugo Chavez. As Venezuela slowly descends into anarchy, Russia has been increasing its involvement, providing Venezuela with lifelines in the form of loans to keep the government solvent. This isn’t simple generosity – Russia is picking up shipments of crude oil and shares in state-owned oil assets in return. And unlike with its grain diplomacy in North Korea, Russia prefers to get paid for the 600,000 tons of grain it will be delivering to Venezuela in the next year, rather than simply offering it as a donation. Still, the motive here isn’t ultimately about profit; it’s about Russia involving itself in the Western Hemisphere and propping up a regime that U.S. administrations of both parties have struggled to deal with. The character of the regime in Caracas matters little to Russia so long as Caracas is at odds with Washington.

Or consider Russia’s involvement in the Middle East, the one place where the U.S. and Russia have been able to cooperate in recent years. Earlier this week, Russia, Iran and Turkey agreed – without any input from the U.S. – to set up a safe zone in Syria, covering most of Idlib province and divided into different areas of responsibility run by each country. The U.S. is focused on destroying the Islamic State, and while the U.S. and Russia work together on that goal, Russia has an eye toward influencing what happens in Syria after IS has been destroyed. From its relationship with Syrian Kurdish groups to its support for the Bashar Assad regime and its continued deployment of limited but effective forces on the ground, Russia is ensuring that it will have a say in the future of the Levant. Syria itself is of little geopolitical significance to Russia (or the U.S., for that matter); what Russia wants is for the U.S. and others to treat it as an equal in order to make the country appear more powerful, at home and abroad, than it really is. 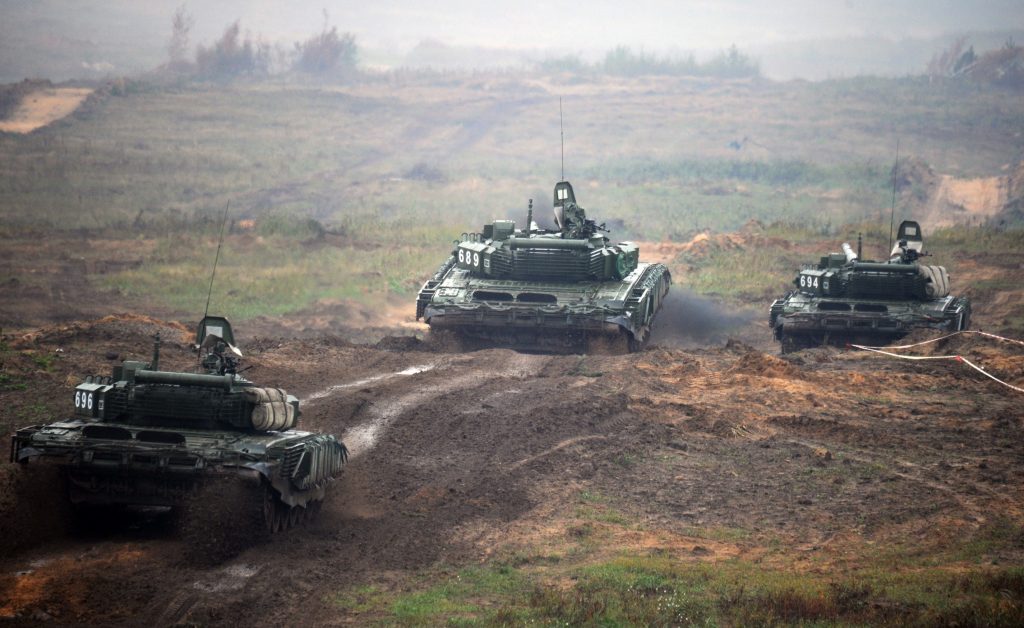 Tanks take part in the joint Russian-Belarusian military exercises Zapad-2017 (West-2017) at a training ground near the town of Borisov on Sept. 20, 2017. SERGEI GAPON/AFP/Getty Images

Plan for the Worst

Meanwhile, Russia and Belarus are holding military exercises known as Zapad, or “West,” in Belarus. These exercises have spooked the region – on Sept. 20, Estonia’s defense minister said, for instance, that the drills were Russia’s preparation to intervene in Belarus. The Belarus issue should not be confused with the foreign policy moves mentioned above. Russia’s control over its traditional buffer zones has shattered. In contrast to the Middle East intervention, these buffer zones are a core Russian security imperative. The Baltics are already in the Western camp, and most of Ukraine is now under the control of a pro-West government that is regularly flirting with receiving new and advanced weaponry from the United States. Belarus is the only country in the buffer zone upon which Russia can still unequivocally depend. Belarus, for its part, has in recent years attempted to move closer to the West, but its economy is still far too dependent on Russia for such moves to be taken seriously.

But governments must hope for the best and plan for the worst. Russia can’t assume Belarus will remain in its camp forever, particularly as Russia’s economic weakness diminishes its ability to buy allegiance. Russia is therefore using these exercises not just to demonstrate its power but also to test how far its military has come since the Georgian War (which revealed serious deficiencies in the Russian military), and how much further it has to go in order to defend what parts of the Eastern European buffer zone are left to it against what it sees as Western encroachment. This is where the roles shift, and where Russia becomes vulnerable if the U.S. were to involve itself more in places like Belarus, whether through nongovernmental organizations or formal policy statements.

Russia cannot shape outcomes, but it can complicate and prolong various conflicts, the goal being to keep the U.S. spread thin, fighting small fires around the world. The more the U.S. is tied down in smaller conflicts that don’t affect Russia directly, the more freedom of action Russia has in its immediate periphery to hone its capabilities and defend its interests without having to worry about a potential U.S. response. As Russia makes headlines, keep in mind that often its goal is to distract the U.S., and that the broad scope of Russia’s moves actually belies Russia’s inability to secure its own interests on its own terms.

Russia is playing a weak hand – but it is playing it very well, and unlike the U.S. or even the Soviet Union, there are simply few things in the world that are of existential importance to Russia. The U.S. tries to be everything to everyone, everywhere. Russia settles for complicating U.S. designs and defining its goals very narrowly. When properly executed, this makes Russia a formidable challenge to the U.S. despite the large gap in hard power between the two.