Strong powers can underplay their hands and afford to make mistakes. Weak powers, on the other hand, need to exaggerate their power and be far more precise in its use. Power is like money; the less you have, the more you need to flaunt it and the fewer mistakes you can afford to make. But by trying to convince others that they have more power than they actually do, they run the risk of squandering a scarce resource. It’s nearly impossible to both flaunt power and preserve it at the same time.

This is the core strategic problem of Russia. On the one hand, it is still trying to find its way more than 25 years after the collapse of the Soviet Union, an event President Vladimir Putin has referred to as “the greatest political catastrophe” of the 20th century. In the lives of nations, a quarter of a century is not very long, and the reverberations of the catastrophe are still being felt. On the other hand, Russia lives in a complex and dangerous region, and appearing weak can be the biggest threat to its well-being. Therefore, like a wealthy person coming into hard times, Russia must simultaneously try to appear more powerful than it is and meticulously manage what power it has.

Since the fall of the Soviet Union, Russia has faced two fundamental problems. The first is geographic. The second, which we’ll return to later, is economic.

Russia’s main geographic problem is that it needs to maintain a buffer zone to its west to stem the risk of attack from the European Peninsula. Russia has been invaded three times, once by France and twice by Germany. In each case, it survived because of strategic depth. The Baltics, Belarus and Ukraine created the buffer zone that gave Russia room to retreat and exhaust the enemy. Although the weather also played a role, distance was the main challenge for attacking armies. Even in World War I, Germany was unable to sustain the gains it won. In the Napoleonic Wars and World War II, the enemy was ground down and defeated.

After World War II, Russia’s buffer zone expanded dramatically. A second tier of nations to the West – Poland, Czechoslovakia, Hungary and Romania – came under Soviet dominion. Soviet power pushed into central Germany. For the first time in its history, it had strategic depth such that an attack from the European Peninsula was unthinkable.

But maintaining the force that was needed to hold this deep buffer exceeded Soviet resources. The drop in oil prices, the inherent inefficiency in the economy, and the cost of defending what it had won in World War II had become unsustainable, and the Soviet Union collapsed. It first lost the deep buffer of Eastern Europe, and two years later, it lost the critical elements of its core buffer, the Baltics and Ukraine.

An argument can be made that given the situation on the European Peninsula, the threat to Russia has evaporated. But nothing in Russia’s history permits such complacency. In 1932, Germany was a weak and divided liberal democracy. Six years later, it was the most powerful military force in Europe. Russia understands the speed with which European (and American) intentions and capabilities can change. It must therefore continue to pursue strategic depth. 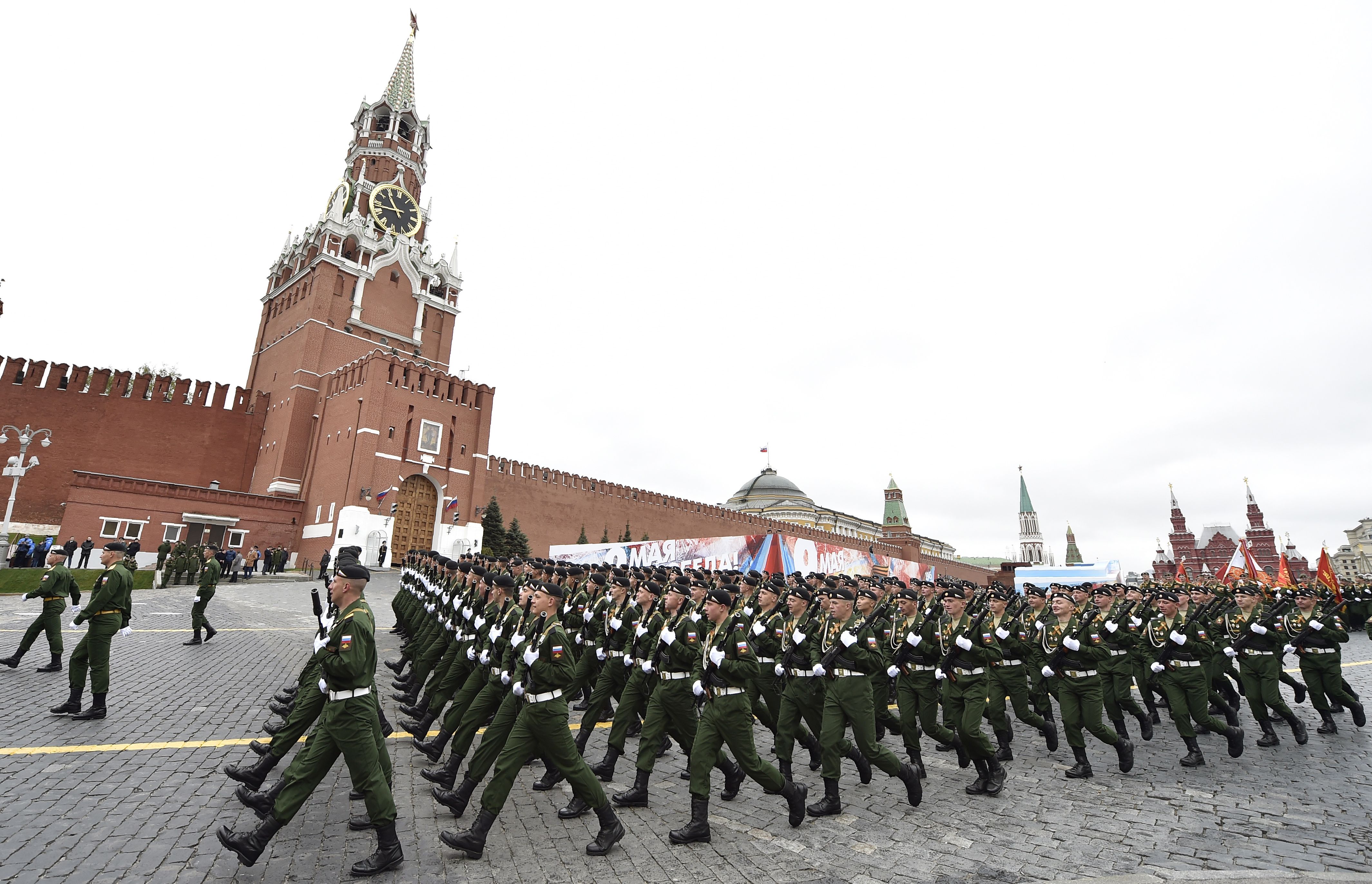 Russian servicemen march at Red Square during the Victory Day military parade in Moscow on May 9, 2017. NATALIA KOLESNIKOVA/AFP/Getty Images

When the Baltic countries were brought into NATO, the Russians were unable to respond. But Ukraine was a different matter. It had become independent but was not absorbed by the West. It was also a critical part of Russia’s buffer. Ukraine is vast, and the cost of crossing it from the west is high. When Western countries, particularly the U.S., appeared to support the establishment of a pro-Western government in Kiev during the 2004 Orange Revolution, Russia believed they actually intended to undermine Russian security. A Ukraine armed or controlled by the West would make Russia very difficult to defend. The U.S. claimed the Orange Revolution was about human rights, but the Russians saw that as a cover. The Russians fought back with covert operations designed to install a pro-Russian government in Kiev. The Americans responded by supporting the uprising in 2014, and the Russians saw this too as a hostile act.

But Russia was in no position to do anything about it. Its intelligence services failed to understand or prevent what happened in Kiev. The Russians had to do something to demonstrate they were not impotent. So Russia formally annexed Crimea, a region that was historically Russian, and where Russian force was already overwhelming. This convinced the Americans that Russia was an aggressive power. Russia found itself in a strategic confrontation that outstripped its resources but which it could not abandon.

But with Russia unable to challenge Western forces and with the U.S. uninterested in an extended conflict with Moscow, the result was a frozen conflict in Ukraine. There was an implicit agreement: Russia would accept a pro-Western government in Kiev so long as that did not include a military alliance or deployment of Western forces in Ukraine. The U.S. and Europe would accept the status quo so long as the Russians did not become aggressive. The Russians had a buffer against the West, and the West had a buffer against Russia.

This achieved a solution the West could live with because Ukraine was not a fundamental interest. But for the Russians, it was only minimally acceptable. Ukraine was vital to Russian interests and this solution was only just short of a defeat.

Russia decided it had to act to increase its strength. But it was dealt another blow in 2014, when oil prices began to decline as a result of increased supplies and constrained demand. And this brings us back to Russia’s second fundamental problem: its economic weakness. Russia is dependent on an economic variable it can’t control. It remains heavily reliant on oil exports but it can’t dictate the price of oil. At a time when it needed to expand its military power, it was facing deep economic constraints. This was precisely the problem the Soviet Union faced in the 1980s. It had to increase its military force while its major export, energy, plunged in price. This problem was instrumental in the Soviet Union’s collapse. To avoid repeating this scenario, the Russians had to decrease their defense budget rather than increase it.

After the dual shocks of 2014, Russia could either acknowledge its weakness or attempt to appear more powerful than it was. But if it acknowledged its problems, Russia was afraid, reasonably so, that the U.S. could impose a more aggressive policy on Moscow. Russia was forced into the maneuver of a formerly wealthy man down on his luck. It had to appear convincingly more powerful than it was, with the attendant danger of using up resources it couldn’t afford to spend. It pursued this strategy through low-cost, low-risk actions.

One such action was in Syria. The intervention there served no Russian strategic interests. There was speculation that Russia was interested in pipelines or ports. But no one believed that Russia’s commitment to Bashar Assad was so deep that it would intervene to save him. In reality, the Russians intervened to show that they could, and to prove that they could deal with the United States and Turkey as equals. From a strategic standpoint, it made little sense. From a psychological standpoint, it made some sense. The forces it sent were limited, and while they may have prevented the fall of Assad, they are now as bogged down as the Americans, unable to win and unable to leave. But being as bogged down as the Americans was not a problem. To the contrary, it made Russia a player on a bigger stage.

Russia’s second low-risk action was an old Soviet strategy: using its intelligence forces in a destabilization campaign. The goal of the Russian campaign was not so much to interfere in political campaigns as to be seen as interfering. The Soviets also played this game in the 1980s, supporting various radical groups in Europe. Of course, the Soviet Union collapsed anyway. Actions taken by weak nations designed to make them appear stronger than they are always fail in the long run. A country’s real power is durable, but illusions are fleeting.

The Russians are delighted that they have convinced some that they control Donald Trump. Not only does this breed instability in the United States, but it gives a sense of overwhelming, if covert, Russian power. If they actually did try to control Trump, then their reputation for incompetence in such matters proceeds them, since being able to blackmail Trump had value only if it were kept secret. And the coup of the century (or several centuries) would be the biggest secret of all time. But the point was not to control Trump, but to destabilize the United States. And while it has certainly created an uproar, the fact remains that American power is intact, and so is Russian power. The balance of power has not changed.

Russia has achieved what it needed to in Syria and in its destabilization campaign. It appears to be stronger than it is. But Russia’s fundamental problems have not been addressed. Its strategic depth has been compromised if not lost, and its economy is staggering as oil prices remain low. The Russians have no solutions to these problems so instead they are engaging in a series of very impressive bluffs. But in the end, they are merely buying time, not solving their strategic problem.