In September and October of 2013, Chinese President Xi Jinping unveiled the One Belt, One Road (OBOR) initiative in visits to Kazakhstan and Indonesia. Before Xi, Chinese strategy had been built off of Deng Xiaoping’s warning in the early 1990s for Chinese leaders to “hide our capacities and bide our time; be good at maintaining a low profile, and never claim leadership.” It is tempting to think of Xi’s OBOR as an ambitious economic development program that will vault Chinese political power ahead in the 21st century and break with Deng’s guidance. A closer analysis of OBOR tempers this kind of thinking for two key reasons. First, the mechanisms by which China will carry out OBOR are in their infancy. More than three years after Xi’s unveiling of the policy, OBOR remains ill-defined and underfunded, and faces an uphill battle against many constraints like geography, Eurasian instability and current trade patterns. Second, OBOR is first and foremost about China’s domestic economic inequalities rather than about China spreading its influence around the globe.

One of the most common analogues used in the media for OBOR is the Marshall Plan. This is a faulty comparison. The Marshall Plan was codified into U.S. law as the Foreign Assistance Act of 1948. A comparison of this document with the OBOR action plan published by various Chinese government agencies on March 28, 2015 is striking. The Foreign Assistance Act of 1948 is a dry, 23-page document written in American legalese. It established clear guidelines for organizations set up to administer funds, advisory boards to oversee those organizations, salaries for officials in charge of the organizations and where they were to live. The Marshall Plan was a highly focused and targeted set of measures formulated and executed with a clear goal in mind: rebuild Europe so that the Iron Curtain could not spread further than it already had across the Continent. 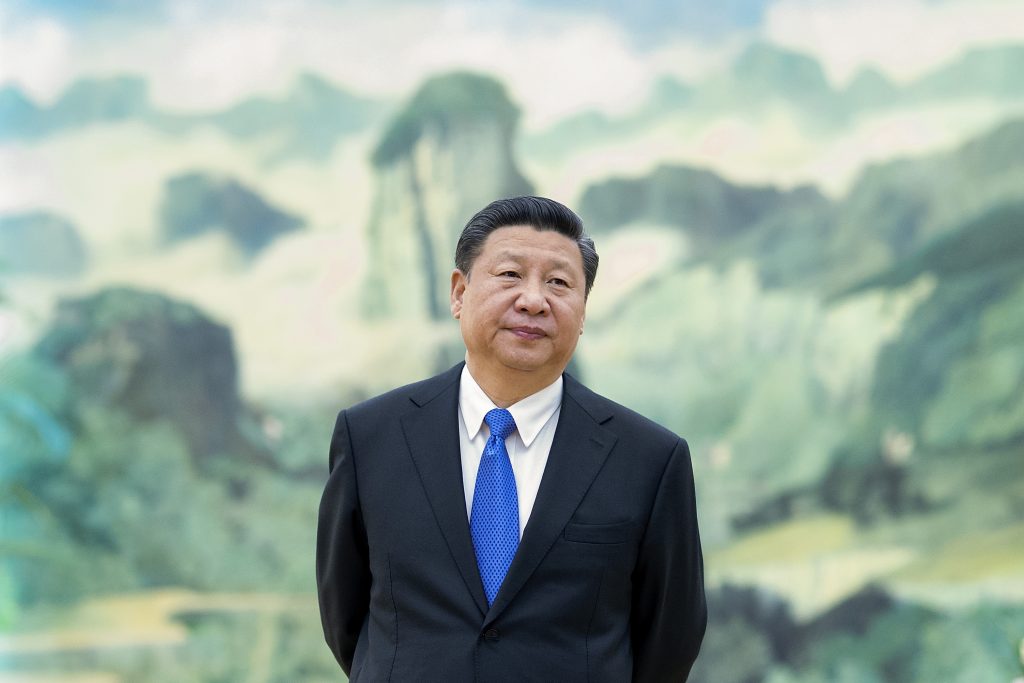 The OBOR action plan bears no resemblance to this document. It begins by touting the virtues of what it calls the “Silk Road Spirit,” which include “peace and cooperation, openness and inclusiveness, mutual learning and mutual benefit.” That the Silk Road was first and foremost about trade (i.e. making money) and that the Han and many subsequent dynasties for years paid tribute to the various tribes and enemies it encountered on its western frontiers – and at times conquered in Central Asia – seems to have been forgotten, or at least politely ignored. No concrete action items are set out in the Chinese government’s action plan for what has become one of Xi’s most visible policy initiatives. The document contains a number of generic proposals without delineating any concrete steps forward and is intermixed with various platitudes about cooperation and understanding.

Those who are bullish on OBOR point out that China has taken concrete steps toward realizing the ambitious goals outlined in the action plan, and a few are noteworthy. A Silk Road Fund with $40 billion provided by the Chinese government has been established. The Asian Infrastructure Investment Bank (AIIB) came into being in October 2014 armed with $100 billion of funding, of which more than a third comes from China. The New Development Bank, which is a funding source for BRICS countries, has another $100 billion of investment it can draw on. These are all positive steps for OBOR, but they are extremely small steps insufficient for the size and scope of OBOR’s ambitious, if ill-defined, goals. 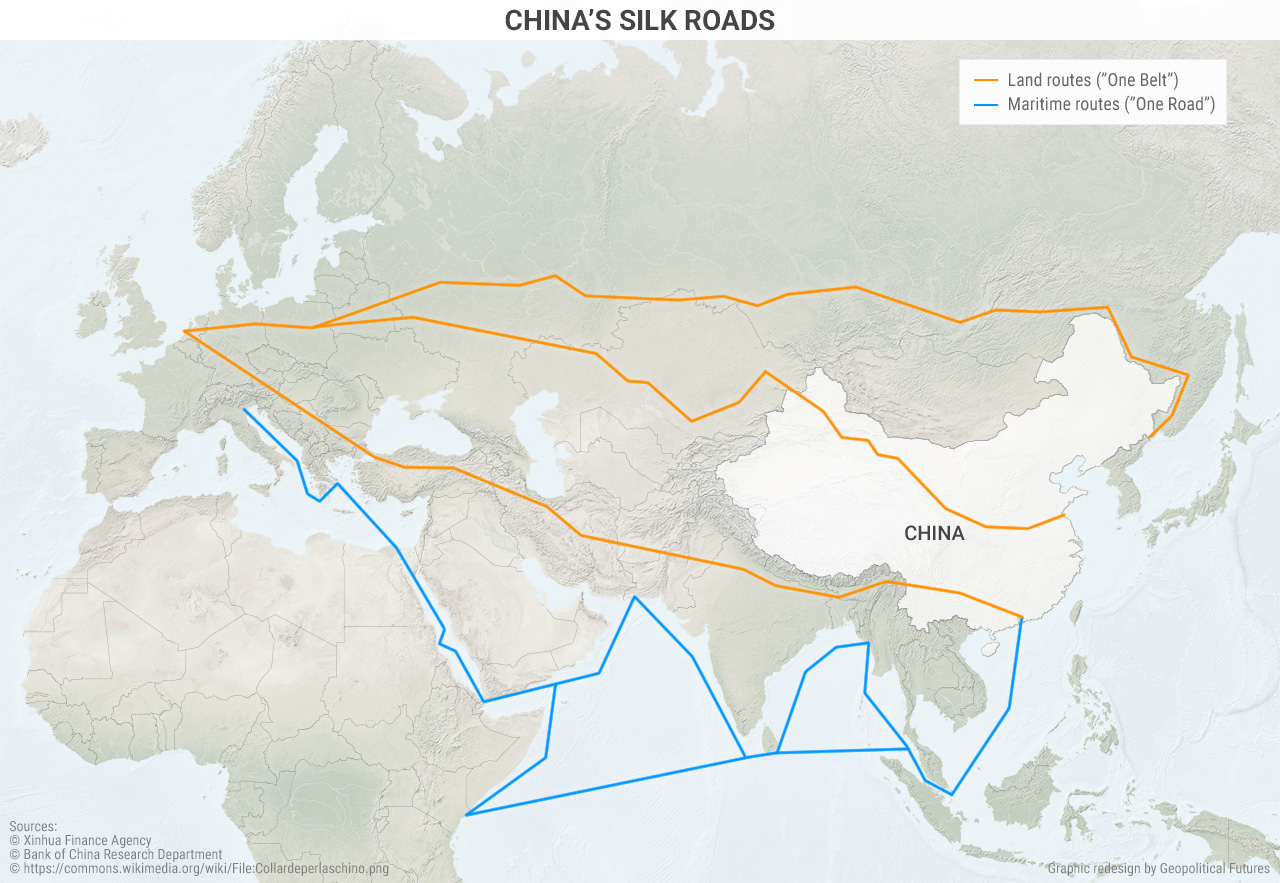 OBOR is supposed to create multiple economic corridors that would cover almost two-thirds of the world’s population and a third of global GDP. The One Belt portion refers to overland corridors; One Road refers to maritime routes. This is a herculean undertaking, and $240 billion barely makes a dent in the total amount of required funding. The infrastructure necessary to link Eurasia will require construction of roads, railways, ports and other elements across vast distances in some of the harshest geography and least populated areas in the world. (Not to mention some of the most lawless and insecure parts of the world.) The fact that over 4.4 billion people only account for a third of the world’s GDP is often skirted over when OBOR’s impressive goals are espoused. But it is an indicator of just how poor many of these areas are. HSBC has projected that OBOR will require at least $4-6 trillion over the next 15 years if it is to take form. That estimate is probably too conservative. Even if accurate, from where and whom this money will come remain open questions.

Besides the capital needed to get OBOR’s ambitious programs off the ground, two deeper problems exist. The first is that even if China and other countries identified as Silk Road partners come up with the money, there is no centralized organizing body or strategic goal that OBOR is supposed to accomplish beyond enriching all of Eurasia. Looking at the projects the AIIB approved last year is telling: a power plant in Myanmar, an electricity supply improvement in Bangladesh, a hydropower project in Pakistan, a highway in Pakistan, a Tajik-Uzbek road improvement program and a slum improvement project in Indonesia. The Marshall Plan had a sharp focus, a clearly defined goal and a set of organizations charged with distributing money to achieve that goal. By comparison, OBOR is an amorphous, unconnected list of projects without a clear and consistent funding mechanism and without an authority overseeing how these smaller projects fit into a much broader scheme.

The second problem is that China’s main purpose in pushing for OBOR is not to increase its foreign power, but rather to alleviate some of its own domestic economic pressures. OBOR is one small part of Xi’s attempt to accomplish what successive Chinese leaders have failed to do: distribute the wealth of the coast to the impoverished parts of China’s interior without causing crippling levels of social instability. The most concrete part of the OBOR action plan is how Chinese provinces will profit from infrastructure development and increases in trade that are supposed to accompany OBOR. The goal is to enrich interior provinces, which despite preternatural growth rates China has seen in the last three decades, remain woefully impoverished compared to the richer coastal regions.

The One Belt portion of the plan (overland trade routes) aims to achieve this by creating easy access to overland markets to help absorb China’s massive excess capacity of steel, coal and other key commodities. China is struggling to cut production of these commodities but has found that it cannot do so without sacrificing economic growth rates. China is still a country with a great deal of poverty, and a large gulf exists between the economic enrichment of Chinese citizens living on the coast and those in the hinterlands. China hopes One Belt will help it find a place to dump the surplus commodities it has produced and justify increased infrastructure spending in less-developed regions. Currently, that infrastructure doesn’t exist, but at least it can be fixed with money and time. Demand for these products is another story, and it is not clear that China will find an enthusiastic market for the commodities it is trying to offload onto its neighbors in Central Asia and the Middle East.

One Road, the maritime component of the plan, is more notable because the global shipping routes that form the basis of the world economy are the true 21st century Silk Road. According to the United Nations Conference on Trade and Development, about 80 percent of global trade by volume and over 70 percent of global trade by value is shipped via maritime routes. Even China’s interior provinces trade mostly by shipping goods overland to and from the coast, not via overland routes to the west. The issue for China is that its economy depends on these routes, whose security is guaranteed by the U.S. Navy. Many countries in Asia will happily take Chinese money and put it to good use, but there is also a great deal of suspicion of Chinese intentions. The ports that China is helping to build will not come with permanent basing agreements for Chinese destroyers or the People’s Liberation Army in those countries, and the first goal of China’s navy is to improve capability to assert Chinese territorial claims in the waters off its coast. China is at minimum decades away from having the kind of naval power projection necessary to challenge the United States for control over global shipping routes. 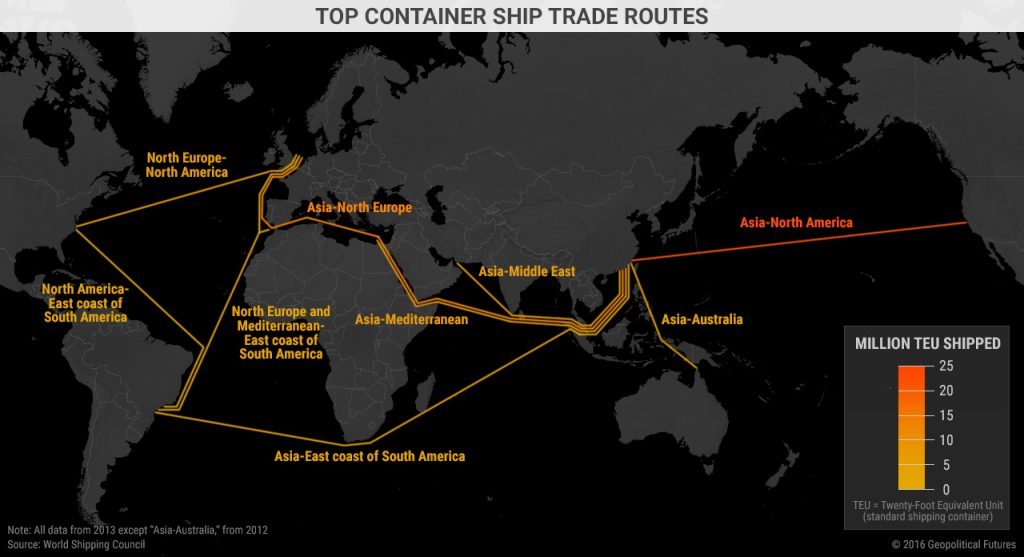 Eurasia is not the pivot of the world as it was when the ancient Silk Road was a vibrant and flourishing trade route. Today, most global trade happens by sea, which is the U.S.’ domain, and OBOR will not change that. OBOR as currently imagined, funded and directed by China is theoretically seductive, but when you examine the boring yet crucial facts of where the money will come from, who will oversee the overall scope of the project, who will buy Chinese steel shipped overland and why OBOR would make countries want to spend more to ship goods across unstable areas, it becomes clear that OBOR is more mirage at this point than game-changer. OBOR has brilliantly succeeded at one thing though: It has greatly increased China’s international prestige and Xi’s domestic credibility, which is the basis of most Chinese moves on the global stage.