The government of Hungarian Prime Minister Viktor Orbán confirmed on June 20 that it intends to place a paid advertisement in the British newspaper Daily Mail expressing its opposition to Britain leaving the European Union. Orbán, one of the most openly Euroskeptic leaders in the bloc, is now campaigning against Brexit.

And he is not alone: Polish Foreign Minister Witold Waszczykowski – whose government is embroiled in a conflict with Brussels over rule-of-law issues – has publicly said he hopes the U.K. remains in Europe. On June 6, the Visegrad group – Hungary, Poland, the Czech Republic and Slovakia – issued a statement “to express their shared strong and sincere interest in the United Kingdom remaining in the European Union.”

On the surface, these Euroskeptic governments’ vocal opposition to Britain leaving the bloc is jarring. After all, governments in countries like Poland and Hungary have been Brussels’ most vocal critics and have sought to limit the EU’s influence and ignore its rules, most recently with regard to refugee policies. Nevertheless, Central Europe’s vehement opposition to Brexit is an example of why interests – much more than ideology – matter in geopolitics.

Governments in the region may want to limit the EU’s role and influence at home, but their economic and security interests lead them to support the U.K.’s membership in the bloc. Some Central European governments are now placing themselves in the same camp as Europe-friendly governments when it comes to Brexit as part of a complex political strategy. Governments in Budapest and Warsaw have been regarded as outsiders in the EU. They are now anticipating a changed bloc, one where Brussels is weaker and national governments have more sway. And in this fragmented bloc, Central European governments are working to find a role and protect their interests.

For Central Europe, British investment, trade, job opportunities and remittance flows are highly significant. For Poland, the region’s largest economy, the U.K. is the second largest export destination: 6.8 percent of Polish exports went to the U.K. in 2015, according to U.N. Comtrade data. The U.K. is the Czech Republic’s fourth largest export destination, accounting for 5.3 percent of exports. 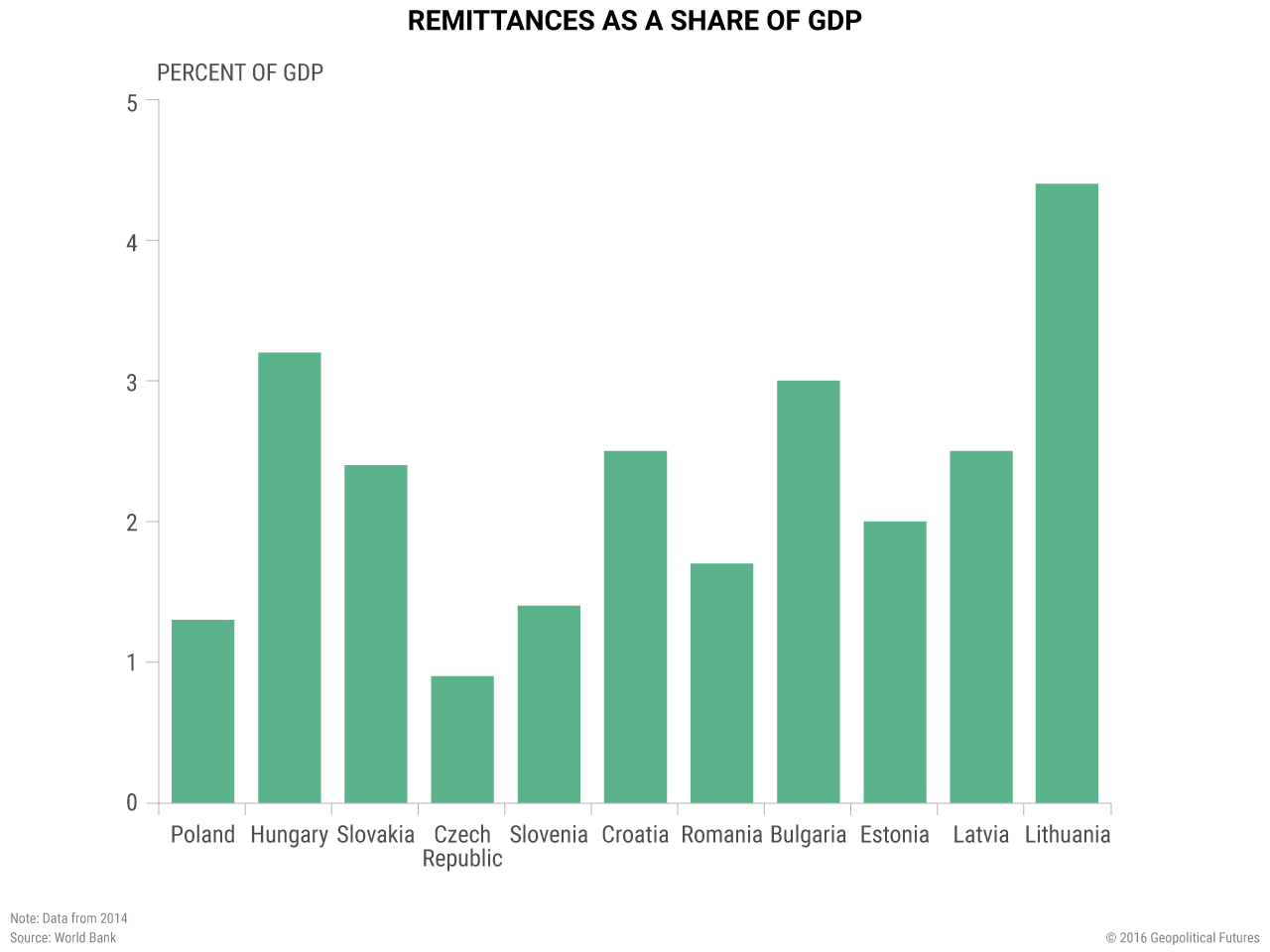 At the same time, much of the region currently enjoys low unemployment rates in large part because millions of Central Europeans work in other EU countries. In 2014, Eurostat reported that over 740,000 Polish citizens and over 160,000 Lithuanian citizens resided in the U.K. Overall, according to Poland’s Central Statistical Office, 2.2 million Poles lived abroad for over three months in 2013. There are also reportedly over 500,000 Hungarians abroad, with an estimated 300,000 in the U.K.

Should British voters opt to leave the European Union, the British government and European officials would have two years to negotiate the terms of the U.K.’s exit. This negotiation would define Britain’s relationship with Europe. There are three options. First, the U.K. could join the European Economic Area, like Norway, which would include free movement of labor from EU countries. The second option is to sign a bilateral agreement with the EU. The third option is for the U.K. to merely adhere to World Trade Organization rules.

As we outlined in our Deep Dive on the referendum, if the U.K. leaves the bloc, Britain and the EU are likely to reach a trade deal. Nevertheless, if this deal is bilateral, there are no guarantees that workers from Central Europe could continue working in the U.K. Moreover, Central European leaders fear the impact of the uncertainty, tariffs on exports to Britain and a drop in British investments. They also fear unemployment and an economic downturn, and thus see Brexit as a threat to economic stability.

But Central Europe’s unease is about more than economics. Some countries see Brexit as another wedge within the Western alliance that threatens the region’s security interests. The Kremlin has been working to split the Western alliance, while the EU has been fragmenting under the weight of internal challenges and diverging interests.

Central Europe forms part of the eastern edge of NATO, and the region’s countries fear that Western Europe may abandon them. Indeed, modest contributions from European states to the defense of the Baltic countries and Poland show that this process is already underway. Countries like Poland know that a more divided Europe is even less likely to act rapidly and cohesively to aid allies in the east.

In Central Europe, governments sometimes adopt Euroskeptic positions to pursue their goals. But with some issues – like Brexit – governments adopt stances far from their usual ideological positions because it is in their interest.

As the European Union becomes more fragmented, countries are adjusting their policies. Central European governments are simultaneously opposed to many EU policies and prepared to hold a weakened version of the union together to protect the benefits they receive from membership. At Geopolitical Futures, we look at ideologies and rhetoric, but analyze first and foremost what countries need to accomplish and the limitations they face when attempting to achieve their goals. Politicians are rarely consistent in their ideas, but highly consistent in pursuing their interests.

Are France and Italy a Foil to Germany?