This past weekend I spoke at a conference hosted by Limes, an influential Italian magazine focused on geopolitics. The topic on everyone’s mind was what U.S. President Donald Trump’s new administration means for the future of the world. I was asked whether Trump’s election portends the end of the “American century.” My answer was simple: The “American century” began in 1991, and it is premature to be sounding the death knell for the U.S.’ position as global hegemon just because some people wish Trump weren’t president.

Three factors explain why the U.S.’ global position is not in danger. First, American economic and military power should not be underestimated because of a presidential election. The election was divisive, but it doesn’t belong in the same category as major domestic political crises like the Civil War, the Great Depression and the stagnation of the 1970s – although the U.S. emerged from all these events stronger than anyone at the time foresaw. Second, one should pay more attention to what Trump does than to what he says. Third, there are no serious challengers to the U.S.’ dominant global position on the horizon. 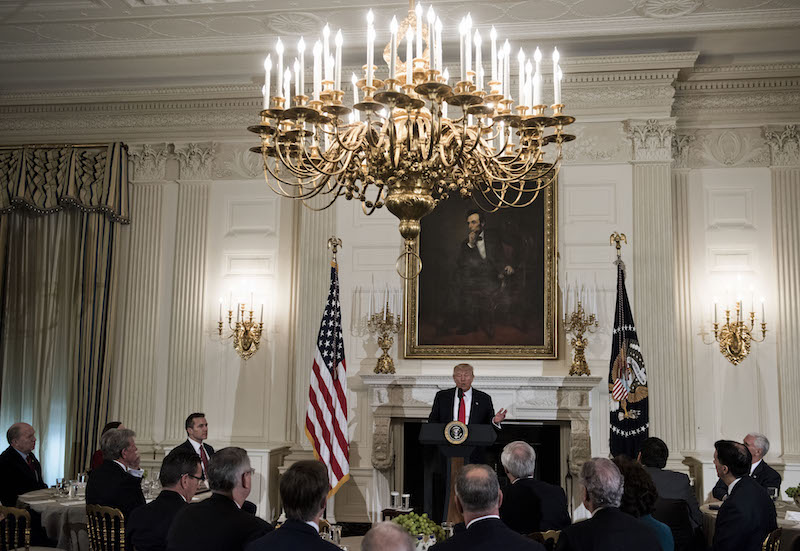 U.S. President Donald Trump speaks to members of the National Governors Association and his administration before a meeting in the State Dining Room of the White House on Feb. 27, 2017 in Washington. BRENDAN SMIALOWSKI/AFP/Getty Images

The president of the Moscow-based Council on Foreign and Defense Policy was the only presenter at the conference to offer a meaningful, if flawed, argument suggesting that U.S. hegemony is at risk. He declared victory for Russia in Syria because Russia prevented regime change in Damascus. He also declared victory for Russia in Ukraine. He suggested that Russia and China had a strong relationship and that a troika of the world’s major powers – the U.S., Russia and China – should stop competing and instead start cooperating to bring peace and prosperity to the world.

There are several problems with this view. Russia has not won anything in Syria besides a chance to get bogged down in a Middle Eastern war of limited strategic significance. Russia annexed Crimea out of weakness, not out of strength – Ukraine’s breakaway from the Russian sphere of influence under President Vladimir Putin’s watch was and remains a disaster for Russia. Russia and China are not and will not become allies. And in terms of military and economic might, Russia is not in the same league as the U.S. and China. Its military is limited, and its GDP in 2015 was slightly less than the state of New York’s.

A Chinese professor who also spoke at the conference agreed with Geopolitical Futures’ forecast about the U.S.’ long-term position as the global hegemon. He based this, however, on the notion that China does not want to become like the United States and, therefore, will not challenge the U.S. position in the world. But this view is flawed. China’s weakness – rather than a cultural aversion to the acquisition of power – precludes it from challenging the U.S. Domestically, China is attempting an unprecedented economic transformation, and even if it is successful in the long run (and GPF is doubtful it can be), such a transition would take decades. Militarily, China does not even have the strongest navy in its own backyard – everyone forgets about Japan.

One of the themes that ran throughout the conference was the ambiguity of Germany’s strategic position in all of this. On one hand, Germany is under pressure to increase defense spending and pull its weight in NATO. On the other, if Germany did increase defense spending, many in Europe would have a heart attack. Germany’s position in terms of Russia and the Mediterranean is sometimes unclear. One speaker did make a point of saying that perhaps the world should begin learning to speak German – to which an audible, collective groan wafted up from the audience.

The notion that Russia, China and the U.S. are equals that should participate in a global stability troika was entertaining, but it did have a kernel of truth in it. Europe’s fragmentation, which George Friedman has been writing about for years, is no longer a forecast: It is today’s reality, and even in danger of becoming passé. Germany has gone from center of gravity to wild card. France is dreaming of becoming more powerful than the Germans, demonstrating that dreams don’t have a statute of limitations. Eastern Europe is chomping at the bit of Western European hypocrisy, and the Balkans is a powder keg. Europe does not solve problems, it collects them: Greece’s debt crisis, war in Ukraine, the migration crisis, non-performing loans in Italy, uncertainty in German banks. These are all regular features in the news cycle, but the only common thread between them is that they are never resolved.

The sum of these perspectives ends where this piece began. The U.S. faces no comparable rival on the global stage. Eurasia is destabilizing at multiple points. The U.S. may be on the edge of a domestic crisis revolving around the struggles of the middle class, but this does not mean the United States’ overwhelming relative power in the world will diminish. Furthermore, and perhaps most significantly, the rest of the world – even the U.S.’ most serious competitors – recognizes the United States’ dominance. Trump’s unique behavior has caused many to question whether his presidency will significantly change the course of U.S. power, but the analytical answers to all the doubts Trump’s tweets raise will always be more boring than Trump’s persona. At the geopolitical level, not much has changed besides tone, and tone does not win wars or upend the status quo.

What has changed is that Eurasia no longer sees America as a benevolent superpower or as a well-intentioned yet bumbling global hegemon. The word used to describe the U.S. over and over here in Genoa was “empire.” An Italian professor who spoke after me (without any irony) compared Trump to Constantine the Great, the emperor who made Christianity the official religion of the Roman Empire in the 4th century. No one batted an eyelash at the comparison. It would have been jarring for many Americans to hear their country called an empire and their president an emperor. The U.S., after all, was founded in a revolution against an empire.

Trump is no Constantine, and the republic is not in danger of becoming an autocracy. But the U.S. is an empire. The U.S. has been disabused of the notion that the national interest and moral preference are synonymous. As a result, the U.S. has lost the will and capability to charge headlong into every battle no matter how tenuous the strategic significance. This, however, does not signify the decline of American power. It is its maturation. This maturation began before Trump came to power and will continue long after his time in office is up.