Before the Italian banking crisis and referendum, before Brexit, there was Greece. Greece’s debt crisis was really the first public crack in the European Union’s armor and one that has yet to be repaired. Readers who want to understand why anti-EU sentiment and nationalism have developed in many of these countries don’t have to go to migration or other controversial topics. Simply go back to the start and look at Greece and how it has fared after adopting the EU’s different austerity terms. The Greek experience with austerity-linked financial support from the EU has been painful, and making matters worse, rather ineffective. While Greece is on the periphery, its problems are hardwired into the entire EU, and those problems are spreading.

When the Greek debt crisis broke in 2010, Athens turned to the EU for help, and assistance to Greece to date has been contingent on Athens executing domestically unpopular reforms. Nearly seven years, 13 austerity packages and three bailouts later (worth a running total of $366 billion), the Greek economy is still struggling. The debt burden now registers at about 177 percent of GDP, and non-performing loans total $119 billion, accounting for 45 percent of the country’s loans. Unemployment is still around 23 percent, and among the unemployed about three-fourths have been unemployed for at least a year. The Greek government regularly finds itself in a catch-22. Either the government carries out European Central Bank (ECB) reforms – thereby becoming public enemy No. 1 – or it attempts to keep the economy running without full backing from the EU. The very institution Athens initially looked to for help is now seen as dubious and problematic. 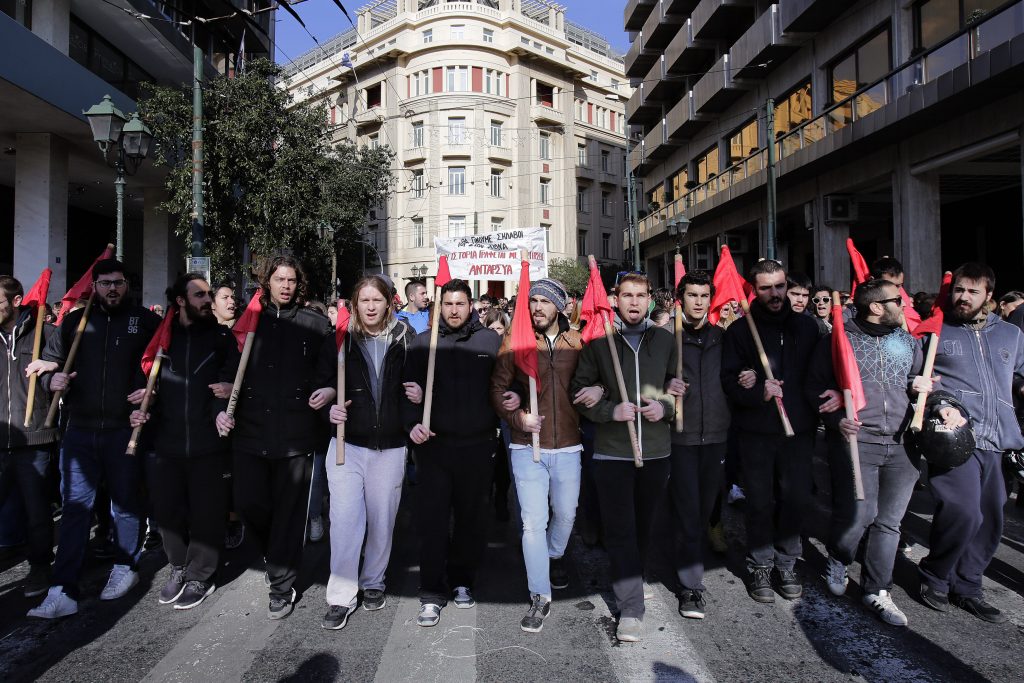 Earlier this week, the Eurogroup (the finance ministers of the 19 eurozone countries) met in Brussels and offered Greece some immediate short-term relief for its debt burden. The measures are supposed to facilitate debt repayments and forego an interest rate hike planned for next year. If all goes according to plan, these measures will reduce Greece’s debt burden by one-fifth by 2060. While this may be a practical timetable given the size of the debt, it is not the most realistic solution. A lot can happen in 43 years, meaning there is a high degree of uncertainty inherently built in. The proposal also does not provide Greece with the debt relief it seeks for the immediate term.

Equally important is what didn’t happen at this meeting. Greece wanted the Eurogroup to sign off on a second review of the current bailout program. Concerns are growing that this review might not be completed until sometime in 2017. Athens and Brussels once again find themselves at an apparent impasse over proposed reforms. The Greek government wants to reintroduce collective bargaining and layoffs as well as reduce the primary budget target to 2.5 percent of GDP in 2018. EU creditors are against the labor reforms and call for a budgetary surplus target of 3.5 percent in 2018. Yet again a standoff.

A successful bailout review would have opened two additional means through which Athens could access more credit. Athens was looking to use a successful review to justify the inclusion of Greek bonds in the EU’s quantitative easing program next year. Such a move would better position Greece to return to bond markets when its austerity package ends in mid-2018. Completion of the review would also pave the way for International Monetary Fund participation in bailouts with Greece.

The IMF did not commit to the 2015 bailout but has been closely accompanying the program. The fund said it would participate in the program if this proved to be the final bailout, if Greece’s debt was deemed sustainable in the long term, and if Greece received debt-relief measures. The IMF argues the 3.5 percent target set by the EU is not sustainable in the medium term and either the target should be lowered or Greece would need more austerity measures. It has also called for a fixed interest rate average of 1.5 percent for eurozone loans to Greece for the next 30 to 40 years. Additionally, the fund suggested the EU free Greece from all payments on bailout loans until 2040.

The main obstacle to the EU-Greece talks and IMF participation is Germany. German Finance Minister Wolfgang Schäuble has stated that reforms are a hard prerequisite for any EU funds, and he is staunchly against debt relief for Greece. As the largest economy in the eurozone, Germany provides a major source of revenue to ECB funds. Given the combination of slowing demand for global trade, high economic dependence on exports and an influx of refugees, Germany cannot afford to continue funneling money into the EU to bail out other countries. Such spending also would not sit well with the public as Germany enters an election year. At the same time, Berlin cannot allow a eurozone economy to completely collapse or leave the monetary union. German exports depend on easy access to European markets, and the departure of a country from the eurozone could jeopardize the integrity of the entire common market.

And so the epic tug-of-war between Greece and the EU (led by Germany) continues as distrust of the EU mounts in Greece. Last May, Greece passed austerity measures worth 5.4 billion euros ($5.7 billion) that greatly impacted taxes, health services, public utilities and pension funds. The government has stated that no more reforms will be accepted. Meanwhile, Germany flexed its EU muscles on Dec. 8 and convinced the union to propose that EU countries in March 2017 should start sending migrants back to Greece as part of a larger effort to prevent asylum-seekers from moving north. Such a move would exacerbate the political, social and economic pressures already facing the Greek government.

There is no shortage of challenges looming in the EU’s future. The unfolding of Greece’s economic tragedy will occur alongside Italy’s banking crisis, the Brexit fallout and slumping trade from the exporter crisis. Athens runs the strong risk of not having the funds to pay bills by June 2017. This does not take into consideration large debt payments that are also due in July. A fourth bailout is not on the ECB’s radar, and after seven years, Greece is running out of capital –both literally and politically – to enact further austerity reforms. If the IMF and Germany can’t agree on acceptable terms for IMF participation in supporting Greece, the eurozone will be forced to bear the full burden of propping up the Greek economy. The latter option is undesirable for members of the eurozone, as it will clash sharply with the rising nationalist sentiments in countries both funding and receiving economic support.

In Venezuela, the Opposition Tries Again to Oust Maduro