In geopolitics, events rarely occur in isolation. On Feb. 9, several stories about German exports, banks and the shipping industry appeared as stand-alone pieces. However, these stories do not gain their full significance unless taken together as part of a bigger picture. There is an inherent link between trade, the shipping industry and banks, given the interdependence of their operations. The latest burst of headlines provides a clearer picture of how the exporter crisis we forecast is unfolding and now intersecting with another forecast on the fall of German banks.

Germany reported on Thursday the world’s largest trade balance surplus – its exports surpassed imports by 253 billion euros (almost $271 billion). Germany’s geography has allowed the country to become the leading exporter and one of the world’s most prosperous countries. Its central location in Europe, access to the North Sea and unique riverbed formed by the Rhine, Elbe and Danube rivers have contributed to its success story. Easy access to maritime shipping routes meant cheap transportation and helped create profitable exports. At the same time, an increase in German exports created the fundamentals for developing ports and other fluvial and maritime infrastructure. The development of the shipping business is synced with that of trade. Germany currently derives about 47 percent of its GDP from exports. That means that its stability is dependent on other countries’ ability to buy German goods. The fact that the German current account registered the highest surplus in the world in 2016, surpassing China, underlines Germany’s global exposure once again. 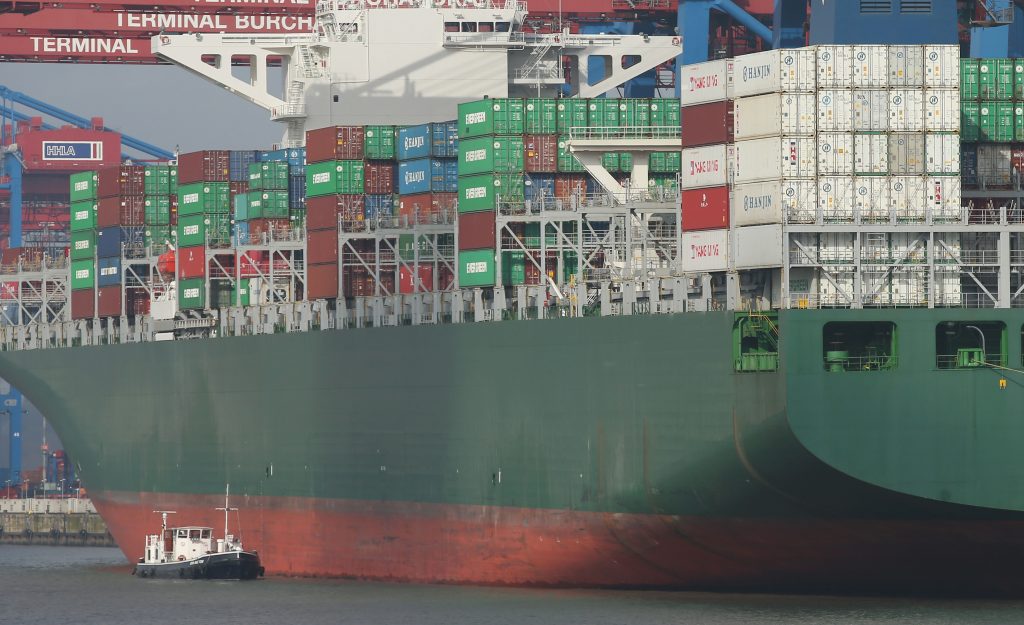 A huge container ship stacked with containers sits at Hamburg Port on March 4, 2016 in Hamburg, Germany. According to the most recent data, Germany has the highest trade surplus in the world. Its major exports include cars and other vehicles, as well as machinery, chemicals and pharmaceuticals. Sean Gallup/Getty Images

The world hasn’t fully recovered from the 2008 crisis. Considering the socio-economic problems in Europe, its largest market, Germany looked to increase exports to other destinations. Russia, the Middle East and China are struggling to keep their economies stable while the U.S. is the only country that has shown real but sluggish recovery since 2008. With the global slowdown in trade and investment, the shipping industry has faced immediate problems. After 2008, there simply were too many ships and too little trade. In the short term, that seemed positive for Germany, as cheaper shipping rates promised safe profits for exporters. But what was good for exporters proved to be bad for German banks.

Also on Thursday, Commerzbank, the second largest bank in Germany, announced that earnings had fallen by 5 percent in the last quarter of 2016 as the bank increased provisions against bad shipping loans. The bank expects its losses on shipping loans to be as high as 600 million euros this year after nearly doubling last year to 559 million euros. This follows the announcement last week by Germany’s largest bank, Deutsche Bank, that losses on shipping loans nearly tripled from a year earlier, to 346 million euros. This news points to a major weakness in the German banking system: its financial sector’s exposure to the international shipping industry.

Our 2017 forecast explains how the 2008 financial crisis is the root cause behind the exporters’ crisis, which includes, but also extends beyond, Germany. Also subject to the 2008 crisis fallout is the shipping industry, which has not recovered. A crash in the global economy meant a drop in demand for international shipping, which soon saw a surplus of containers and ships. However, instead of scrapping members of their fleets, many companies opted to take advantage of low credit rates and reduced costs to invest in bigger vessels. In theory, this made sense given more cargo could be shipped at one time and the completion of the Panama Canal expansion would allow for larger ships.

Over the last two years, fleet capacity has increasingly outstripped trade demand. Again, a domino effect of consequences occurred. Freight rates began to plunge. By early 2016, major world shipping companies formed three trans-Pacific shipping alliances in an attempt to manage cargo share and have more coordinated control of fleet numbers. Both moves were geared toward helping freight prices recover. Freight prices reached record lows in the second quarter of 2016, dropping by as much as 18 percent compared to the previous year. Many of the world’s shipping companies reported heavy financial losses. For only the second time in the company’s history, Maersk reported an annual loss in 2016. Cosco reported a loss of $1.44 billion.

The global shipping industry does not expect to see a strong recovery or boost in demand this year. As shipping profits decline, it will become increasingly difficult to service debt. This means banks will run a higher risk of writing off more loans. For Germany, this translates into more bad news. According to the German Shipowners’ Association, German banks and investors own about 29 percent of the world’s container ship capacity. German lenders have been the biggest issuers of shipping loans. Based on Petrofin Global Bank Research statistics, German banks own one-fourth of all outstanding shipping loans made by large banks (about $90 billion). That makes them vulnerable to the shipping malaise.

As the shipping industry faces bankruptcies, banks are seeing their losses increase. Besides Commerzbank, smaller banks like HSH Nordbank, NORD/LB and Bremer Landesbank have faced problems since 2010 due to exposure to the shipping business. DVB Bank also specializes in shipping and is experiencing credit problems due to the shipping industry. DekaBank had to cut its business outlook for 2016 by 20 percent because it needed to set aside large amounts for bad shipping loans in the first two quarters. German public broadcaster ARD published a report in January saying that up to 20 billion euros in credit guarantees may be needed to prop up banks in the northern states of Hamburg and Schleswig-Holstein with bad investments in container shipping.

So far, none of these shipping-related credit problems have been big enough to challenge the German banking system’s stability. At first view, the announcements from Commerzbank and Deutsche Bank don’t seem to be, either. But the rate at which losses are increasing year-on-year is worrisome, especially since the shipping industry is not expected to recover large profit margins anytime soon. The acceleration of bank losses due to shipping sector problems indicates the increasing vulnerability of the German banking sector to global markets. This is another issue that adds to the list of problems that the German banking system must deal with and another indicator of the increasingly fragile state of the German economy.

The Maghreb and Its Challenges for Europe