Geopolitical Futures’ forecast for 2017 is that the frozen conflict in Ukraine will be formalized in some way. Increased fighting in Ukraine since Jan. 29 poses a potential challenge to this forecast and therefore warrants a close look. Last week, Ukrainian President Petro Poroshenko cut short his visit to Germany amid news of heavy fighting in eastern Ukraine, near the town of Avdiivka. Both sides – the Ukrainian army and Russian-backed separatists – accuse each other of starting the most recent fighting. To understand why this is happening now, it is necessary first to understand what is happening and then to take a step back and understand the strategic position of each of the major players. This line of analysis leads to the conclusion that at present, the forecast remains on track.

It’s not unusual for Ukrainian forces and Russian-backed separatists to shell each other in Donbass, but in terms of casualties and number of attacks, last week represented a significant uptick. In Avdiivka, north of Donetsk, shelling has been ongoing since Jan. 29, peaking on Feb 2-3. Attacks on the Oktyabr coal mine and the city’s coke chemical plant cut the energy supply for local residents (power has since been mostly restored). Donetsk Filter Station stopped operating due to the destruction of electricity infrastructure. Since Feb. 1, a water pipeline leak near Avdiivka disrupted the water supply to residents of Mariupol. On the night of Feb. 4, more shelling damaged electricity infrastructure for the city of Horlivka. Hostilities also further escalated in Luhansk and Mariupol. Over 33 people have been killed and dozens more injured since the violence began to escalate last month. 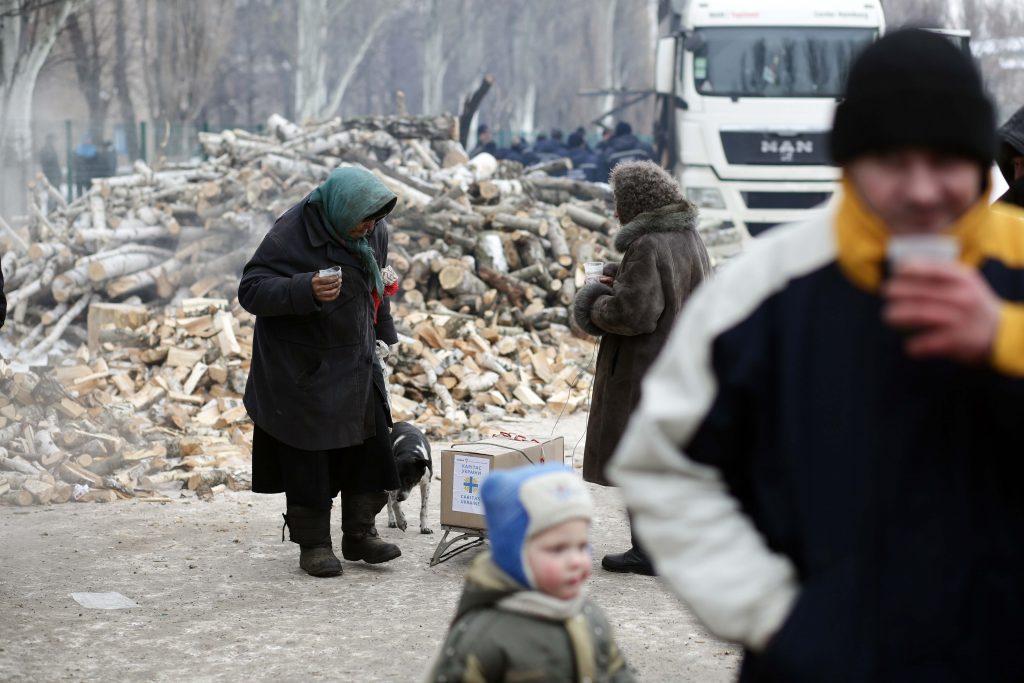 A woman carries a care package as residents queue for hot food distributed by Ukrainian rescue services in the flashpoint eastern town of Avdiivka, north of the pro-Russian rebels’ de facto capital of Donetsk, on Feb. 3, 2017. ALEKSEY FILIPPOV/AFP/Getty Images

Both Ukraine and Russia have increased their military presence along the contact line. The OSCE Special Monitoring Mission to Ukraine has confirmed Ukraine increased its defenses with more troops and large-caliber artillery, including battle tanks seen moving toward Donetsk and Mariupol. Since Jan. 31, these have been the main fighting sites. On Feb. 4-5, armored combat vehicles were spotted near Donetsk, Mariupol and Luhansk. Russian media reported that two Tochka-U missile systems were moved to the area of the Avdiivka coke plant, and six more of those systems were delivered to a railway station in the village of Novobakhmutovka, near Yasynuvata. Ukraine’s Ministry of Defense warned on Jan. 25 that Russia was building up its defense along the Ukrainian border in the Rostov region as well, increasing the number of troops and artillery units, and creating combat and logistical support units for a new division, as well as their encampments.

Fighting appears to be tapering off, but it is important to understand why it intensified in the first place. If you listen to reports from both sides, they devolve into a “he said, she said” situation. A more effective way of understanding what is going on is to step back and think about the strategic positions of Russia, the United States and Ukraine, and what each currently needs.

Russia has no interest in a flare-up in fighting in eastern Ukraine right now. The Russian economy is struggling, and there are signs of internal political shuffling that suggest President Vladimir Putin may feel a need to consolidate his rule. Besides these domestic issues, Russia does not have the requisite force necessary to take Ukraine by force. Russia wants a formalization of the status quo, which would require both sides to admit that neither can make the other do what it wants. If that is accompanied by a removal of economic sanctions it would be a bonus, but what Russia cannot tolerate is a Western-backed and armed government in Kiev hostile to Russian interests. Russia knows it cannot change the situation in Kiev, but an agreement that preserves the status quo and limits the amount of military assistance the West offers Kiev would give Russia time to deal with its internal issues and develop its forces while playing the long game in Kiev. 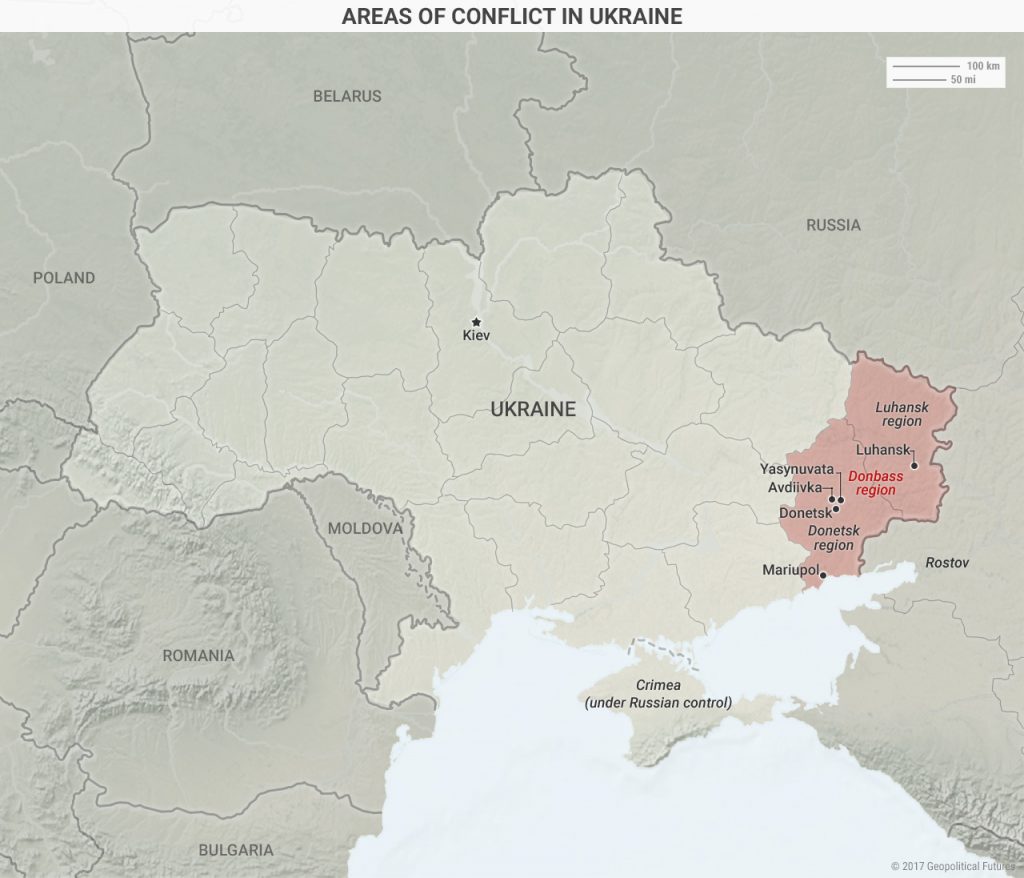 The U.S. also does not want the Ukraine situation to get worse. The administration of President Donald Trump has made crushing the Islamic State a top priority and is interested in exploring limited cooperation with Russia toward achieving that end. The U.S. has what it wants in Ukraine: a pro-Western government in Kiev. The U.S. does not have the will or the ability to intervene to push pro-Russian forces out of the country’s east, and at this point exacerbating instability in the region has reached a point of diminishing returns. The status of a few regions in eastern Ukraine is not a pressing concern and, if anything, obstructs the U.S.’ goals. An increase in fighting between Ukrainian and pro-Russian forces is exactly what the new U.S. administration does not want right now.

The outlier here is Ukraine, which undoubtedly hears some of the statements Trump has made on Russia and is terrified by them. For Ukraine, a formalization of the status quo already is a loss, but the notion that the U.S. and Russia might cooperate in Syria, and that this understanding might extend to concessions in Ukraine, is a very real threat. To make matters worse from a Ukrainian perspective, Kiev’s EU allies are not in a position to help, either. They, too, have an interest in formalizing the frozen conflict. The Europeans perceive the removal of sanctions as an economic opportunity. Furthermore, both Germany and France have elections this year, and their leaders are focused on internal problems, which means they have less bandwidth for an interminable conflict in the east.

Reports have increased since last September of Ukrainian army incursions into the “gray zone,” the area between government and separatist forces along the contact line over which the two sides have fought since the signing of the first failed peace agreement in September 2014. Reports on separatist incursions have appeared since last November. The timing of such movements around the potential, and then reality, of a Trump presidency is likely not coincidental. Ukraine wants to make it clear to the new administration that Russia is the enemy and that Ukraine needs U.S. support. Ukraine’s position then is helped if a small crisis between pro-Ukrainian and pro-Russian forces in the east emerges, especially one that demonstrates to the world that Russia is hostile toward Ukraine and that Ukraine needs Western security assurances now more than ever. None of this means that Ukraine started the most recent round of fighting. It just means that from a strategic perspective, Ukraine is the only actor in the conflict that currently benefits from an uptick in fighting. Whether or not it was pro-Ukrainian forces that fired first, once the fighting began, it was in Ukraine’s interest to publicize it and condemn pro-Russian forces as loudly as possible.

The problem for Ukraine is that its interests are not the same as U.S. interests. Ukraine wants to reunify the country and expel Russia from its territory. The U.S. is primarily interested in weakening Russia, and the fate of Donetsk and Luhansk is immaterial to that goal. The U.S. is not going to abandon Ukraine, but that is an easy thing to say and a much harder thing to be sure of if you are in Kiev reading American newspapers and following various White House statements.

The key thing to keep in mind is this: The U.S. is not ready for – nor does it desire – a fight in Ukraine. Russia is similarly ill-prepared and not spoiling for a fight. If anything, Russia hopes to keep things quiet so it can reach an understanding with the U.S. and European countries. As long as this is the case, a small flare-up in eastern Ukraine will be of limited significance and eventually will fade away. The Ukrainians will loudly trumpet the conflict to any willing to listen. But as long as the major powers are not interested in a full-scale tilt, and as long as the conflict in the east stays relatively small, the conflict will remain frozen. If either the U.S. or Russian position changes or forces on either side escalate fighting far more seriously than what has been observed even in the past week, GPF’s forecast will require revision. But the current fighting is well within the bounds of our expectations.