By Cheyenne Ligon and Allison Fedirka

As the year draws to a close, we examine a critical forecast that will bridge 2016 and 2017: the Italian banking crisis. In our 2016 forecast, we discussed how the focal point of Europe’s financial crisis would shift from Greece to the Italian banking system, as Italy headed toward crisis. For the coming year, we forecast that the evolution of this crisis will eventually force a confrontation between Italy, Germany and the European Union. In this Reality Check, we establish a starting point for the looming Italian banking crisis in 2017, which will unfold over several months and have a range of consequences.

Italy’s banking crisis currently pivots around the fate of Banca Monte dei Paschi di Siena (MPS). The bank spent 2016 struggling to shed 28 billion euros ($29.6 billion) in non-performing loans (NPLs), which account for 36 percent of the bank’s loan portfolio. That is the highest proportion of NPLs of any bank in Italy. As a result, investors and depositors began withdrawing their money, compounding the bank’s financial crisis by creating a liquidity problem. Last week, MPS announced that its remaining 11 billion euros in liquidity would only last until April.

The bank’s efforts to privately solve its financial problems failed, leaving the Italian government as the bank’s only remaining recourse. MPS spent the fourth quarter of 2016 seeking 5 billion euros of capital and a fund to underwrite it. The bank failed to meet its Dec. 22 deadline, after the deal’s largest backer pulled out at the last minute causing the plan to fall through. With the private sector and outside financial institutions reluctant to help, MPS formally requested aid from the Italian government. On Dec. 23, the Italian Cabinet announced that the bank would be rescued with a 20 billion euro fund approved by Parliament earlier in the week. 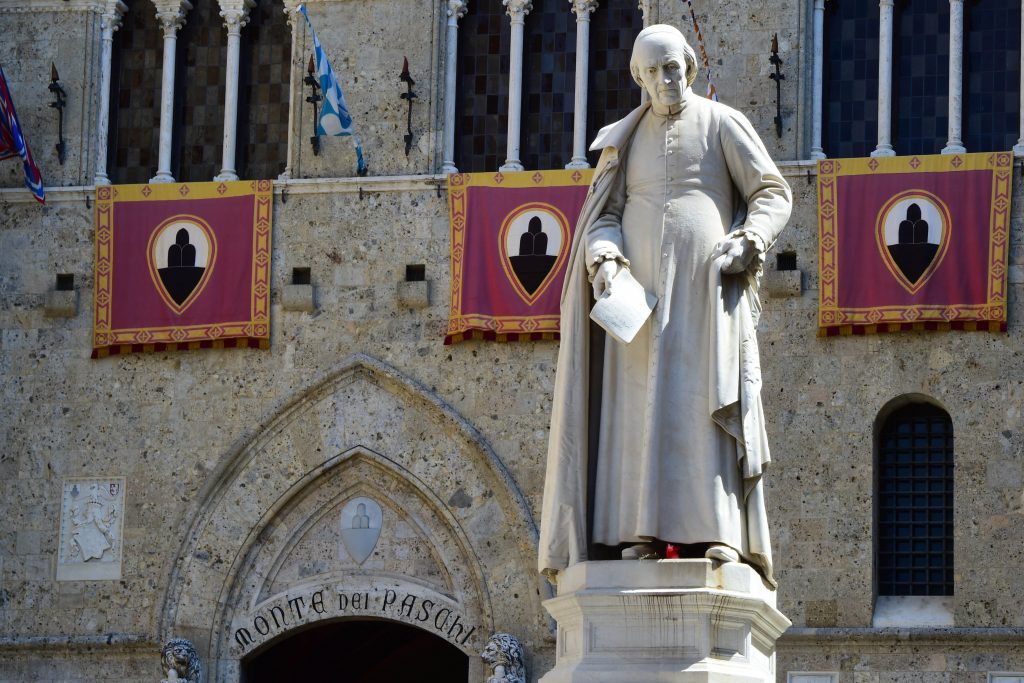 The headquarters of Banca Monte dei Paschi di Siena on July 2, 2016 in Siena, in the Italian region of Tuscany. GIUSEPPE CACACE/AFP/Getty Images

The next obvious question is will 20 billion euros be enough to solve MPS’ problems? While the sum would address MPS’ immediate needs, estimated at about 8.8 billion euros, many independent researchers believe Italy’s current 20 billion euro fund is not enough to save the bank in the long run. Goldman Sachs estimates that successful recapitalization would require 38 billion euros, while a senior market analyst at London Capital Group suggests the number might be closer to 52 billion euros.

As a member of the eurozone, Italy’s banking crisis is not just an Italian problem. Uncertainty in the Italian market could lead risk-averse investors to stay away from Italian assets, and thus the euro, impacting its value. Additionally, should MPS or other large Italian financial institutions fail, Italy would sink into a domestic economic crisis that would have significant systemic effects on the value of the euro. This would have negative repercussions for other economies in the eurozone.

Italy, in theory, also needs to comply with EU regulations. The divergence between Italy’s national needs and the EU’s needs has made finding a solution acceptable to both parties extremely difficult. Italy wants to protect taxpayers while the EU wants depositors to assume the burden of debt instead of the European Central Bank (ECB). The solution thus far has been to promote a plan in which Italy appears to be following EU regulations, but which provides enough wiggle room to protect the bank’s domestic investors. Article 32 of the EU’s Banking Recovery and Resolution Directive, which took effect at the beginning of this year, states that banks must first go through a “precautionary recapitalization,” also known as a bail-in, before they are allowed to receive state funds. This is meant to protect taxpayers from shouldering the entire burden of a bailout. In MPS’ case, this would mean that bondholders must take an 8 percent loss in assets before the government is allowed to inject capital into the bank. However, the ECB is currently negotiating a plan with the Italian government in which the bank would be allowed to protect these retail investors by swapping their riskier junior bonds for more stable senior ones.

Germany, as de facto leader of the EU, is the main force behind the ECB’s opposition to supporting bailouts. Germany has elections next year and is also facing a looming exporter crisis. Politically and economically, it cannot assume the high burden of propping up the eurozone. The EU must walk a fine line of being flexible enough to avoid financial collapse, but stringent enough to preserve the union’s institutional integrity – at least what remains of it. This approach has already been seen with France and Spain obtaining more flexibility with budget targets. But Italy’s Dec. 4 constitutional referendum created more leverage for the Italian government. Italian voters clearly rejected former Prime Minister Matteo Renzi and his negotiator approach with the EU, and this reflects the public’s growing desire for Italy to do what is best for Italy, even at the expense of the EU.

These economic problems naturally affect the lives of average Italians. Problems like inflation, stagnating growth and unemployment affect the pocketbook and daily life. A 4 billion euro bail-in for four smaller banks in Italy last year led to the suicide of a pensioner and protests, after 130,000 bank shareholders and bondholders lost their investments. Renzi was fiercely criticized, and residual anger drove many voters into the arms of anti-establishment parties. Paolo Gentiloni, Italy’s new prime minister, has asked the EU to allow Italy to protect retail investors to avoid a repeat of Renzi’s experience. An estimated 40,000 households in Italy hold 2 billion euros of MPS’ subordinated bonds. The loss of life savings for 40,000 families in Italy has the potential to spark domestic unrest and lead to a flare-up in anti-EU sentiment.

All parties understand that if the EU does not allow the Italian government to protect its retail investors, nationalist parties like the Five Star Movement and the Northern League will become more popular. Both political parties have promised a Brexit-style referendum should they come to power in Italy’s legislative elections in 2018. It would also cause public pressure that the future prime minister, selected in February, would not be able to ignore. This would not only jeopardize the fragile political and economic landscape in Italy, but also the entire eurozone. While MPS is just one bank, the ripple effects of one Italian bank failing are numerous and deep. The bank’s failure would severely escalate the crises already underway. Its salvation would allow Italy and the EU to fight another day, but it’s a far cry from solving the underlying structural causes of Italy’s problem.

Productivity in the US Continues to Decline