The USS Nimitz left Bremerton, Washington, for the Western Pacific on June 1. It should arrive in a week, give or take a few days. In the meantime, the war of words continues, along with a war of nerves and a focus on mediation by China.

The United States is prepared to go to war in North Korea if it must, and preparations for this are underway, but it would prefer a diplomatic settlement. The U.S. is now in the period, as we were before Operation Desert Storm in 1991 and Operation Iraqi Freedom in 2003, where a defiant enemy, in this case North Korea, is calculating its options. The U.S. is not going to assume that a diplomatic solution can be reached, since a solution seems unlikely at this point. It would look very much like a North Korean capitulation, and Pyongyang can’t afford to capitulate. It is a time of relative quiet, but it probably won’t stay that way. 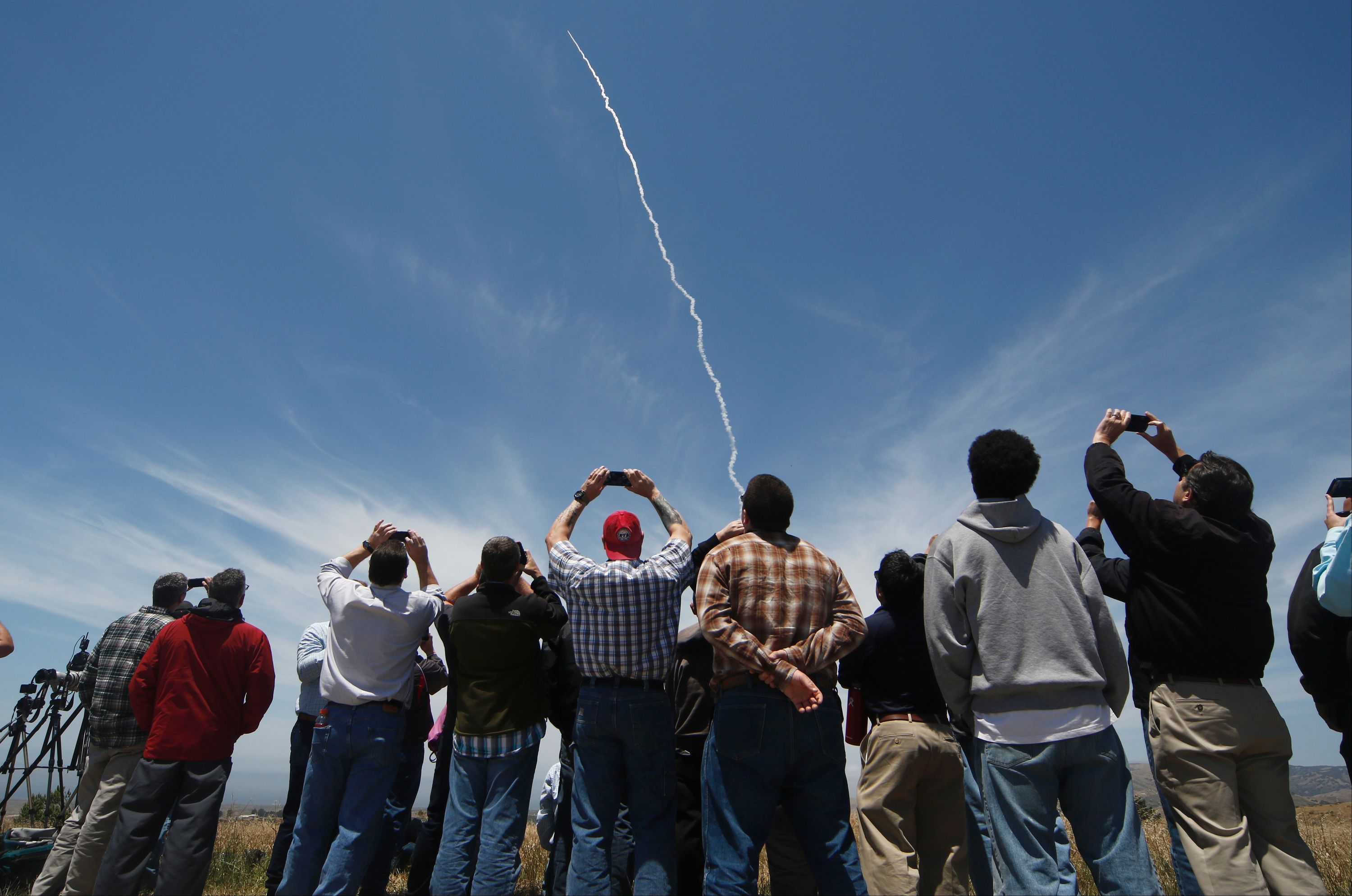 People watch a ground-based interceptor missile take off at Vandenberg Air Force base, California, on May 30, 2017. The U.S. military said it had intercepted a mock-up of an intercontinental ballistic missile in a first-of-its-kind test that comes amid concerns over North Korea’s weapons program. GENE BLEVINS/AFP/Getty Images

A Shift in Focus

The United States has now focused not on the nuclear program but on the missile delivery system. It is not demanding that North Korea abandon its nuclear program but is adamant on the ICBM. It is unclear whether Mattis’ comments mean that the United States will accept weapons that can strike others in the region such as Japan (as long as they can’t strike the U.S.), but it appears to be enough of a shift that China can say to the North Koreans that the U.S. is showing flexibility. It is offering the North Koreans a solution that does not involve stepping back but merely agreeing not to look forward.

This solution is dubious for both sides. The United States would need to verify that the North Koreans stopped developing their missiles. U.S. inspectors on the ground would be needed, since international inspectors in such circumstances have occasionally demonstrated poor eyesight. A missile program can be detected by satellites, but there are ways for North Korea to surprise the U.S. with suddenly deployed and armed missiles. And depending on China to monitor the situation would require more confidence in China than the U.S. possesses.

Another problem for the U.S. is that this would leave North Korean nuclear capabilities intact for future exploitation and for potential sale to third parties. It would also leave regional powers, particularly Japan, vulnerable while protecting the United States, putting pressure on that relationship.

As for North Korea, it is facing this crisis because it lacks any way to deter the United States. The U.S. can attack North Korea at will. North Korea can’t do the same to the U.S. North Korea’s primary goal is regime survival, and giving up the ICBM means abandoning that goal. Accepting American inspectors would require aggressive inspections and a political capitulation that could leave Kim Jong Un politically vulnerable at home. For the North Koreans, this deal would be less of a compromise than a capitulation.

All of this raises the question of whether China is acting in good faith. By cooperating, China might gain economic concessions from the United States, but it’s unclear how long they would last. And China might actually welcome a United States obsessed with a North Korean ICBM aimed at the U.S., since this might divert U.S. focus in East Asia from China to North Korea permanently. Finally, while common sense would suggest that China has significant leverage with North Korea, that should not be overstated.

Economically, North Korea is relatively self-sufficient. It has chosen poverty over dependence. The economic sanctions China can impose, such as blocking North Korean coal exports, have already been used in previous crises. The North Koreans, moreover, haven’t trusted China since the Korean War, when China made no attempt to intervene until the U.S. threatened to cross the Yalu River into China. Absent that, the Chinese, having encouraged North Korea to invade the South, were willing to see North Korea fall. Using China as a negotiator might seem logical, but China has few chips to play and a history of betrayal.

Mattis presented this issue in an interesting way in Singapore. On the one hand, he expressed confidence in China on North Korea. On the other hand, he ripped into Chinese policies in the South China Sea as violating international law. The message was that nothing China does in North Korea will make the U.S. concede the South China Sea, which was a relief to the audience in Singapore. But Mattis also conveyed the message to China and others that the U.S. is not confident in finding a diplomatic solution to this crisis.

In the meantime, there were some odd developments that were obviously signals in the negotiations. An unnamed U.S. Navy official told Voice of America that the USS Carl Vinson was leaving waters around the Korean Peninsula. The source then reported that the Vinson and the USS Ronald Reagan began military exercises, operating side by side with aircraft overhead. It was meant to confuse and intimidate the North Koreans. We at GPF have focused on carrier deployments because they are the most visible sign of U.S. preparations for war. But in a potential conflict, they would play a somewhat limited role; the heavy lifting would be done by strategic bombers in Guam. As a reminder to the North Koreans, some of those bombers conducted a fairly large overflight south of the demilitarized zone on May 29.

While the focus of U.S. demands has shifted to ICBMs, North Korea’s nuclear program still presents a major threat to the region and could lead to diffusion of nuclear weapons and technology. Inspections are unlikely to work, since the U.S. will not trust international observers from the International Atomic Energy Agency. And the North Koreans will not accept American observers, which signals to the Americans that they intend to cheat.

We remain in the same position as before, with the USS Nimitz scheduled to arrive in waters off the Korean Peninsula sometime this week. It seems unlikely to me that the Chinese will be able to produce a solution that satisfies both sides. In the meantime, North Korea is in the position that Saddam Hussein was in before both wars in Iraq. Giving in to the Americans could create a domestic political crisis and permanently weaken the regime. There is a possibility that the U.S. has no stomach for this war. There is also a possibility that North Korea could defeat the United States in Korea. Given the risks of capitulation, war may appear the more prudent move.

The U.S. is hoping for a diplomatic solution but doesn’t expect one. Mattis said war would have catastrophic consequences because he saw what happened to U.S. public opinion over Iraq after Donald Rumsfeld dismissed the concerns that the war might be much harder than he thought. For Mattis, predicting the worst and having it play out better than anticipated is preferable over the reverse.

In short, it seems to me that we continue on the path to war. We are in a period where diplomacy is being given a chance but is not seen as a particularly hopeful plan. And as Mattis made clear, the only alternative to a diplomatic solution remains war.