Conducting foreign policy or preparing for war requires the ability to put yourself in your adversary’s position. Unless you understand what he sees and how he thinks, his actions will make no sense to you. This will cause you to miscalculate because you will confuse a lack of understanding on your part with insanity or stupidity on your adversary’s part. If you dismiss your enemy as a clown or lunatic – when in reality he knows what he is doing and he understands what you are doing – his chances of succeeding soar, while your chances plummet. This is an important lesson to apply to the current situation on the Korean Peninsula.

The Democratic People’s Republic of Korea was founded as a communist state and a client of the Soviet Union. The Soviets encouraged North Korea to invade South Korea to control the entire peninsula. North Korea’s founder, Kim Il Sung, saw his regime nearly destroyed when the United States, contrary to Soviet expectations or North Korean calculations, intervened and decimated the North Korean army. North Korea exists today only because the Chinese intervened as the Americans approached the Yalu River, which forms the border with China. The Chinese were not concerned about North Korea. They were concerned about their own national security. 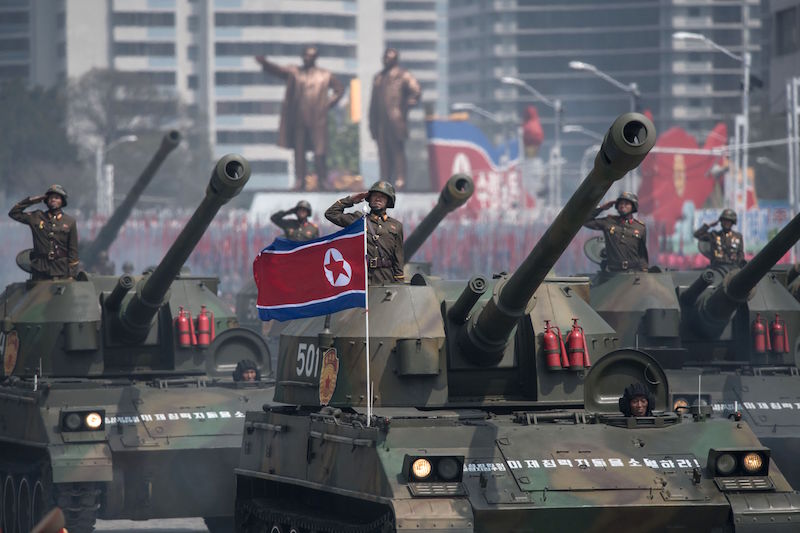 China’s intervention led to a stalemate on the peninsula roughly where the current lines stand, which is not far from the original boundary between the North and the South. In other words, the North Koreans gained nothing from the war, and in surviving, they were dominated by the Chinese. Whatever economy North Korea had was shattered, and the regime was nearly destroyed.

The North Koreans drew some important conclusions from the war. First, communist ideology had little to do with their communist allies’ actions. The Soviets saw an opportunity to test the United States at little cost or risk to themselves. If North Korea had taken the peninsula, the Soviet position in the waters off the Asian mainland would have been strengthened. But if North Korea had been occupied, the Soviets would not have been worse off than they were. The Chinese were willing to supply troops only until they themselves were at risk and were also prepared to see North Korea destroyed or truncated. International socialist solidarity was secondary to national interests.

North Korea also learned that the United States was utterly unpredictable and dangerous. Although the U.S. indicated that the Korean Peninsula was not a central part of its policy in Asia, the U.S. entered the war, fighting capably and at times brilliantly, as with the landing at Inchon. While the U.S. remembers the fighting with the Chinese from the standpoint of the retreat at Chosin Reservoir, the U.S. killed around 180,000 Chinese troops. The U.S. stood its ground and gave better than it got.

The North Koreans learned that what the Americans said had little to do with what they did, and that the Americans, if they chose, could bring enormous forces to bear. North Korea also realized that the Soviets regarded North Korean interests as subsidiary to even secondary Soviet interests. As for the Chinese, they had a capable force but one that would be deployed only when Chinese interests were at stake.

Therefore, the North Koreans believed their position was strategically impossible. They faced three major powers, any one of which could annihilate North Korea. Their strategy was to avoid annihilation by proving it would not be worth anyone’s trouble. This did not mean being meek by any stretch. It required convincing other powers that they would incur a huge cost by absorbing or defeating North Korea. The country’s greatest strength was its relative unimportance. If it could also increase the dangers involved in being subdued, it could survive.

To do this, the North Koreans would have to build a military machine capable of deterrence. A country as poor as North Korea had to militarize the entire society. It had to produce the wherewithal to survive and field a military force capable of keeping all others at bay. North Korea is still poor, but despite that poverty it is too dangerous to deal with. Modern North Korea is a rational adjustment to its perceived reality. It might follow that the populace would be restive. But whether through intimidation or contentment, little evidence exists that they are. So the North Korean government operates from a stable platform.

The Sino-Soviet split of the 1960s brought about another dimension. North Korea learned to manipulate these countries and used their distrust of each other to extract support by shifting its weight from side to side. The North Koreans used the tensions on their border to increase their value to each country at different times and, therefore, to control their relationships. After 1991, this became even harder and in some ways more profitable as the residual ideological ties dropped away and all sides could pursue their national interests. But the fall of the Soviet Union and the emergence of China brought their own perils. China became the overwhelming force, and one that was difficult to manipulate. Therefore, North Korea’s core strategy had to be updated, and this involved a nuclear program with serious intentions.

North Korea sees itself as alone and isolated. Its history shows that attempting to cooperate with its neighbors can lead to catastrophe. It also believes that it can predict and control American behavior, but this could also end in catastrophe. It has survived since the Korean War by not being a significant strategic prize and by possessing a force that deters intervention. North Korea’s world consists of China, Russia and the United States. South Korea and Japan are not going to take any steps without the United States. Therefore, the U.S. is the permanent threat, while Russia and China (particularly China) are both dangers and possible allies depending on circumstances. North Korea must be helpful to China but never again become a pawn or a battlefield.

In a deterrence strategy, the method must always match the fear of the enemy. The United States fears terrorism and nuclear weapons. North Korea is unable to strike the U.S., so it is a secondary threat. But it believes that acquiring nuclear capability against the United States would protect it from American unpredictability.

However – and paradoxically – creating the deterrent leads to U.S. unpredictability temporarily surging. Between the time that it demonstrates the ability to create a nuclear deterrent and the time it achieves it, the United States becomes extremely dangerous. Therefore, to mitigate if not remove the danger – or at least to buy time – North Korea must use China and Russia as a counter. They may not want North Korea to have nuclear capability, but they have other issues with the United States, and they might see an advantage in the U.S. focusing on a minor country.

A safer course might be to abandon the nuclear program, but the North Koreans calculate that if they were to do this, they would be putting off the inevitable. Their deterrent power would decline, and their dependence on China and Russia would increase. That did not work well in the past. Therefore, the only prudent course is to hope that short-term considerations will force the Chinese and Russians to help them buy time to complete their nuclear deterrent.

It is an enormously risky path for the North Koreans, but ever since the Soviet Union collapsed and the Chinese focused on Walmart, they have been on a precipice. They have survived by cunning, bluffing and the indifference of others. That is hope, not a strategy. Their strategy is to become too dangerous to attack. The U.S. is unpredictable, but one thing is certain: It will not engage a nuclear state that can strike back. The North Koreans have drawn China into the game, buying them more time. It is the witching hour for them, but they expected this and will play it out.

The North Korean government does not consist of one man. It has been pursuing a consistent policy for over half a century. It is now in the end game, and we do not know the answer to the most important question: Have the North Koreans already built a nuclear weapon, and if not, how much time do they need? We also do not know if China wants North Korea to be a nuclear power to absorb U.S. attention, or if it would be afraid of a nuclear North Korea. The U.S. and North Korea likely don’t know the answer, and perhaps the Chinese haven’t yet decided. But the point here is that North Korea is not stupid nor crazy. Such powers do not create conundrums vastly beyond their apparent resources.

What We’re Reading: Migrants and Lies