Editor’s note: This week, in light of the Republican withdrawal of a bill that would have repealed and replaced the Affordable Care Act (Obamacare), we are republishing George Friedman’s piece from Dec. 16, 2016 about the constraints on the power of Trump’s administration. In that piece, George talked about how weak the office of the U.S. president is in general and how weak Trump will be as a president in particular. This past week’s legislative setbacks for the Trump administration are foreseen by this Dec. 16 piece. In addition, its insights are not just relevant for explaining the significance of that defeat. The piece describes the broader challenge Trump will be facing throughout the course of his presidency.

Donald Trump’s presidency will have geopolitical consequences. Most of the world wants to know what he will do. But that depends on what he can do. That, in turn, will be determined by the political dynamics within the United States as well as by counteractions of other nations. This is a case where politics rises to the level of geopolitics. Trump’s actions will be conditioned by the actions of other players, particularly in Congress. Trump, after all, will only be the president and his unilateral powers will be limited. For most of the things he wants to do, he needs Congress to go along. Therefore, the American stance toward the world will depend, for the moment, less on what Trump wishes than what Congress decides to do.

Trump has presented himself as a transformative leader, confronting a crisis in the U.S. with a radical new approach, both in policy and in political culture. Many presidents present themselves as transformative, but few are. In the 20th century, two were genuinely transformative. One was Franklin D. Roosevelt and the other Ronald Reagan. Both faced problems that the vast majority of Americans knew to be problems. Roosevelt confronted the Great Depression, Reagan the stagflation of the 1970s. Both also confronted significant geopolitical problems. Roosevelt had to deal with the emerging crisis in Europe and Asia, combined with his social and economic concerns. Reagan, in addition to an economic crisis, had to cope with the defeat in Vietnam and the subsequent relative increase of Soviet power. 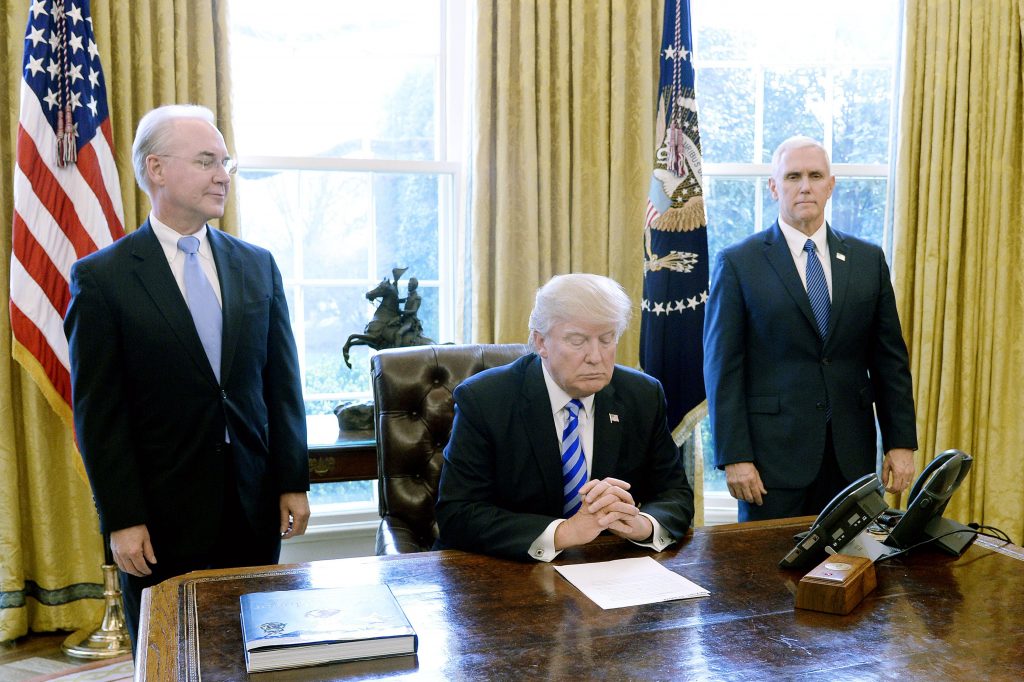 It was clear that these problems originated in the prior political and economic culture and that being different on multiple levels from the conventional expectations of the past was essential. Roosevelt’s decision to fund massively federal programs for the unemployed generated rage, as they ran completely counter to what was expected from a president. Reagan suffered the same public discontent. Early in his term, air traffic controllers went on strike despite laws banning them from striking. He fired them. Firing striking workers regardless of the law was considered unthinkable. He was vilified for the decision.

Walter Lippmann, one of the greatest columnists of the age, said of Roosevelt: “Franklin D. Roosevelt is no crusader. He is no tribune of the people. He is no enemy of entrenched privilege. He is a pleasant man who, without any important qualifications for the office, would very much like to be President.” Roosevelt’s opponent, Herbert Hoover, called him a “chameleon on plaid” and criticized him for his “nonsense … tirades … glittering generalizations … ignorance” and “defamation.” Of Reagan, one commentator said he was “the end product of television politics. … It is a show and he’s a star actor.” Jimmy Carter accused Reagan of injecting racism into the campaign by using “code words like ‘states’ rights.’”

It is important to remember the venom in prior campaigns and to recognize the easy dismissal of the new. But Trump has a deeper problem. Roosevelt won about 60 percent of the vote and carried every state but Maine, Vermont, New Hampshire, Rhode Island and Pennsylvania. He blew Hoover away. In 1980, Reagan got 50 percent of the vote against Carter’s 41 percent (John Anderson was in the race and got the rest). Reagan also won every state except Georgia, West Virginia, Minnesota, Maryland, Rhode Island and Hawaii. It was another blowout.

Trump intended to be a transformational candidate. His problem was that he did not blow Hillary Clinton out of the water. Where Reagan and Roosevelt had enough muscle to force congressmen in their parties to vote with them, Republicans in Congress haven’t figured out whether they will want Trump’s support in the next election. The narrowness of Trump’s victory is not just an interesting footnote to history. It is a significant handicap to his plans, because while Republicans have a majority in Congress, their main concern isn’t settled.

What congressmen and senators want most is to be re-elected. To be re-elected, they need voters’ support. Congressmen are all peering two years in the future, trying to guess whether by then Trump will have developed support that they can use to win, whether he will stay where he is now, or whether his support will deteriorate. If they follow Trump and his support declines, re-election will be difficult in many districts. If Trump increases his popularity, supporting him will be a stroke of genius. This may be regarded as cynicism, or as faithfully representing your constituency, but that is what they are thinking.

And this is what foreign governments are considering as well. They are asking themselves whether Trump will be strong enough in Congress to carry out all his initiatives, or whether he will be paralyzed by a hostile Congress and poor political ratings. China, Mexico and Russia – as well as every other country – know that this election is not the end of the struggle, but the beginning.

Trump will need to substantially increase his positive ratings to demonstrate to Congress that he is trending upward. After an election, presidents normally have a honeymoon period of a few months, where they are given the benefit of the doubt. Roosevelt and Reagan didn’t need a honeymoon period – their numbers spoke for themselves.

If Trump doesn’t get the honeymoon, with some Clinton supporters coming over to his side at least temporarily, this will cause congressmen to carefully evaluate the mood in their districts. They will have to make the difficult decision of whether to oppose Trump, and if they do oppose him, on what issues. Foreign governments will also be evaluating their options. It is not simply being president that makes you powerful, it is the support you have in Congress, and that depends on the support you have in the country. If he had blown away Clinton, he wouldn’t face this problem. Since he didn’t, he does.

And that makes Trump’s first 100 days far more important to him than to previous presidents. He needs to demonstrate to his party that he can craft and pass legislation that will increase his popularity. He has to do this while making it clear to his supporters that he is not going to do what previous leaders did and ignore the promises he made during the campaign. This is hard to do. Congressmen and senators who might lose in the next election if they support the measures that are closest to the heart of Trump’s base will resist. And with only a 52-48 majority in the Senate, it will be tough. It is always important to remember that in the American system, presidents have minimal power over senators and congressmen. Their greatest influence comes from popularity they can transfer to candidates from their party – at a price.

Trump has another deeper problem. Roosevelt and Reagan faced systemic problems that both hurt deeply and were not debatable. The core issue in the U.S. now is the decline of the middle and lower-middle classes’ purchasing power. The lower-middle class is priced out of homeownership.

However, a family with a median income can still afford a modest home. In my opinion, the crisis will not develop fully until those with a median household income are priced out. Many other measures exist, but I am using this one because homeownership is built deeply into our culture. I believe that over the next decade this terminal decline will take place, and at that point a president will be elected with numbers similar to those of Roosevelt and Reagan, powerful enough to take action, with a Congress fearful of angering him.

In my view, Trump identified the right problem too early. As a result, he ran a campaign focused on broader issues. But what he didn’t have is the ability to focus laser-like on the fact that the system has crippled half of society. He won those who had been crippled and those who feared being crippled, and it was enough to eke out a victory. Like Barry Goldwater, who made Reagan’s case 16 years too early, Trump has identified the key issue and mobilized a coalition that barely put him in power – the difference being Goldwater got trounced.

Trump’s coalition must be satisfied that he is a transformative president. But to do that, he is going to have to deal with Congress and in particular the fears of Republicans about his future, and therefore theirs. The problem that Trump has is that without early victories, later ones will be much harder to come by. Weakness begets weakness.

And this most assuredly will affect the international system. Countries around the world will behave very differently depending on if Trump strengthens or weakens. Some want a stronger American president. Israel is an example. Others, most assuredly including Russia, would like a president unable to act, giving them breathing room. The entire world – even beyond Washington, which is its own planet – will be looking at Trump’s first days and the polls that are sure to come. And for Trump, holding his own is not enough given that the election was so close.

The Second Phase of American Geopolitics