Donald Trump has been elected president of the United States. The extent of the bewilderment is significant. The pollsters were shocked. The media was surprised. The financial markets were stunned. Many in the Republican Party were astonished. And the Democratic Party was totally taken off guard. The thought that a man with Trump’s values and behavior could become president was, to many, unthinkable. I do not mean that they disagreed with him, or hoped that Trump would lose. They thought it inconceivable that a man like Trump could win. 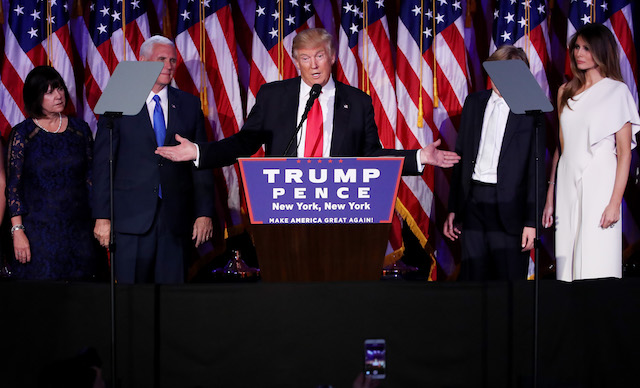 That is the reason Hillary Clinton lost. The Democratic Party that nominated her has moved far away from the party that Franklin D. Roosevelt crafted or that Lyndon B. Johnson had led. Their party had as its core the white working class. The liberalism of FDR and LBJ was built around this group, with other elements added and subtracted. Much has been said about this group having become less important. Perhaps so, but it is still the single largest ethnic and social group in the country.

This group, as I have argued before, is in trouble. The middle class, with a median take-home pay in California of about $4,300 a month, can buy a modest house and a car but certainly can’t afford to send their kids to college. Hence the massive student loans their children must take out. The lower-middle class has a take-home pay of about $2,600 a month. A generation ago the lower-middle class could buy a small house in a not-so-great neighborhood. Now they are hard pressed to rent an apartment. Liberals are concerned with inequality. People in the lower-middle class are simply concerned with making enough money to live a decent life. They are two very different things.

Trump, it turns out, understood this problem. He also understood that these people had lost the culture wars that had been waged for the past generation. Their churches and parents raised and taught them that homosexuality is a sin, as is abortion and premarital sex. Evangelical Christianity wasn’t so much the issue, but rather the gut values with which they were raised. Many of this class had sinned, but they knew it was a sin and they valued the standards they’d been taught, even when they didn’t live up to them.

Within a generation, this lower- and middle-class group had been displaced. Pride that comes from working hard and making a good living for their families was lost. They found that values they had regarded as commonplace were now regarded as phobias, illnesses they must overcome in order to be politically correct. Values they were taught as children could no longer be expressed in public.

This middle-class group no longer had a place in the Democratic Party. They felt the Democratic Party not only had contempt for them, but also that it valued immigrants, and the rights and culture of immigrants, far more than it valued the beliefs of the white middle class. That was true, but it was not the immigrants the party valued, it was the upper-middle class, college-educated victors in the culture wars.

When Clinton made her extraordinary speech about Trump’s basket of “deplorables,” she was expressing the chasm of contempt that had opened up within the Democratic Party between the educated and the working class. She said there were two baskets. In one was the homophobic, xenophobic misogynists. In the other basket were the poor who had been left behind. It was not clear that this second basket was deplorable, but those in it were certainly not her major concern. Clinton made the “deplorables” statement to make it clear that not only was Trump unacceptable, but his followers were too. Clearly, she didn’t think she needed their votes. But she did need to reinforce her base’s sense of fighting the good fight against evil and failure.

What Clinton and the elite didn’t understand was that this group was sufficient to serve as Trump’s base and that he could add to it. Looking at exit polls, the hostility of women to Trump turned out to not be there. Over 20 percent of Hispanics voted for Trump. Trump built a coalition that Clinton believed could not be built. It was in some ways a broader coalition than she had created. The elite made assumptions about women, Hispanics and others implying it was inconceivable for anyone other than the deplorables to support Trump.

Clinton’s statement about Trump’s followers struck me at the time, and still does, as amazing. She was then a few points ahead of Trump, which meant that nearly half of the country supported him. By implication, she was saying that half the country is deplorable. Her statement was not only contemptuous, but showed her to be a terrible politician. To win the election, she needed to hold all of her supporters, plus take away some of Trump’s. The deplorable statement drove many off instead.

It was not only bad politics. It also represents a core internal problem. The elite of the United States – and all countries have and need elites – has become profoundly self-enclosed. This is similar to the situation in the U.K. when the elite was enraged at the Brexit referendum result, and hurled epithets at the narrow majority that voted for Brexit, calling them uneducated, incapable of understanding the issues and so on.

Economic stresses build up in all societies at various points. At this moment, European countries are undergoing the same sort of stresses as the United States, but even more intensely. Nationalist movements are growing in many of those countries. They are hostile to the European Union, oppose uncontrolled immigration and are resentful of policies that impose austerity that affects the middle and lower classes, without significant impact on the elite.

Whether these policies are appropriate is not what matters here. The issue is that extended economic dysfunction has inevitable political consequences. This presidential campaign pivoted on the fact that Clinton did not understand the political movement that was rising and dismissed it as marginal. Trump did understand it, played to it and won the presidency. But it goes one step deeper. He won the election by arguing that Washington and the media were oblivious to the economic problem. During the later days of the campaign, he consistently made the claim that the Washington elite in particular was completely out of touch with the reality of any Americans outside its class.

I can safely assert Trump was the better politician. He won, not an overwhelming victory, but a decisive one. Clinton’s weakness was that she saw her position at the heart of the political establishment as decisive. She dismissed Bernie Sanders in spite of his strength, and she never really took Trump seriously. She regarded the 3-point lead in the polls as sufficient. That was complacency, but it hid a lack of understanding that a political volcano was building in the middle class, and many others shared in the sense that things were going wrong.

Clinton didn’t see a major problem, although her predecessors in the Democratic Party (LBJ and FDR) had. Her advisers didn’t see it. Instead they saw an intemperate man hurling insults at others, totally unsuited for high office. Unfortunately, voters turned out to be far less interested in Trump’s rudeness than in Clinton’s cluelessness.

Some will lay blame for the loss on FBI Director James Comey’s letter. That undoubtedly contributed to it. But it was not decisive. Economic dysfunction leads to political upheaval, and Clinton didn’t grasp the significance of the dysfunction. And somewhere in her mind the fact that white males without a college degree opposed her indicated that only deplorable people opposed her, although why white males without a college education should be thought of as deplorable is an important question.

In any case, the election is a surprise only because the polls were so wrong. Trump was likely in the lead for quite a while. The decline in the accuracy of polls is noteworthy, primarily because Clinton might have thought more deeply about her situation if she had known she was behind.

Trump executed an obnoxious campaign. I was deeply offended by his attack on John McCain, not over the question of whether McCain was a hero, but rather because Trump said he preferred pilots who don’t get shot down to those who do. As commander in chief, he will, like every president since FDR, have to order troops into harm’s way. How does a commander order his pilots to strike, when they know that if they are shot down, their commander’s respect for them will decline? This was an election where offensive statements abounded. Trump had more than Clinton, but Clinton’s comments were a direct attack on a class of voters, which was more startling. In the end, the voters decided.

Trump will be president and he has made sweeping promises as all candidates do. It is easy to dismiss these promises, as it was easy to dismiss the idea that he would get the Republican nomination, or that he would win the election. Like all political leaders he will be constrained by reality. But seeing reality clearly enough to achieve what others think is impossible is what makes great leaders. I have difficulty imagining what his government will look like, but I was someone who thought he would never get the Republican nomination. It is important to be cautious about dismissing this man.

The Genius of Labor Day