The final irony in an election filled with irony is the refusal of some voters to accept President-elect Donald Trump’s victory. This group doesn’t simply include demonstrators but a movement of some size to persuade the electoral college to vote for Hillary Clinton instead of Trump. The irony is that it was Trump who threatened to refuse to accept the results of the election, while the Clinton camp charged that Trump was violating the sanctity of democracy. Now each has adopted the other’s position. Although, Clinton herself has not sought to overturn the election. 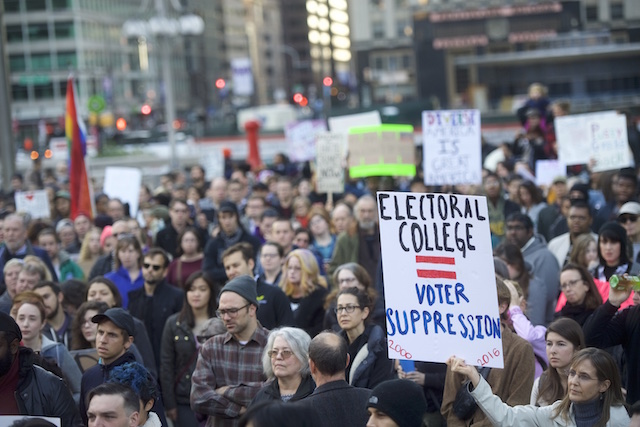 Protesters demonstrate against President-elect Donald Trump on Nov. 13, 2016 in Philadelphia, Pennsylvania. The Republican candidate lost the popular vote by more than a million votes, but won the electoral college. (Photo by Mark Makela/Getty Images)

Irony aside, it should be borne in mind that asking electors to vote differently than they had pledged to is completely legitimate. The president of the United States is not elected either by popular vote or even by the mathematics of electoral votes. Presidents are elected by electors – these are the people voters actually cast their ballots for on election day. All electors are selected by the parties to whom it is assumed they will be loyal. But legally, their vote is theirs and they are empowered by the constitution to use their judgement as they see fit.

The founders chose this method, and I think it is a pretty good one for a number of reasons. First, it has to be remembered that the United States was not founded as a democracy. Leaving out all those who originally were unable to vote (slaves, women, men without property in many states), the founders created a republic. A republic is a system in which voters do not govern directly, but select representatives to speak for them. The representatives are not bound to slavishly uphold public opinion, but to exercise their own judgment. They face periodic elections, every six years in the Senate and every two years in the House of Representatives. Initially there was another layer —  the state legislators selected senators. State legislators were elected by the people and answerable come next election day. The people’s voice was intended to be heard, but moderated by passing through filters.

The founders wanted filters because they feared that passions could arouse the public, and national policy could become hostage to these passions. Therefore, they wanted men (always men) mediating between public opinion and national policy. They also expected these men to be of substance and property, with much to lose from error and also more difficult to corrupt. This mirrors Trump’s argument that he is less corruptible because of his wealth. In addition, such men would not see public service as a career, and could act without fear of being voted out of office. Their livelihood was not to depend on election. They were answerable to the public, but did not fear or worship public opinion. Therefore, the founders did not believe in direct democracy at all. They founded a republic, a very different creature.

The electoral college is derived from this original conception of republicanism. The founders were trying to solve a serious problem with this system. They did not want a parliamentary system. Parliaments made the executive and the legislature one. They wanted the executive and Congress to check and balance each other (and do they ever). Therefore, they needed another institution.

The founders didn’t want political parties as they feared factionalism. They never anticipated the two party system, which presents voters with basically a binary choice and minor parties on the margins. What could have occurred, and what might yet occur, is complete gridlock — a situation with many viable candidates, none with the majority of the popular vote or the majority of electoral votes. Who could solve this problem? An entity was needed that could negotiate, compromise and create a coalition to elect a president by majority. These people had to be free to change their votes in the course of negotiations. If even then no decision could be made, the election would be decided in the House of Representatives, as it was in 1824. This would mean that one branch of government would be selecting the other branch, but this is only a last resort, since it was the last thing the founders wanted. The electoral college was created to solve political deadlocks without making the president a prisoner of the House of Representatives.

The founders did not opt for direct election of presidents because they opposed direct democracy and supported representative government. But there was another reason as well. The United States was a coalition of sovereign states. That’s why it is called the United States. Each state is required to have a republican government, but the United States is not a direct compact with the people. “We the people” are the foundation of the Republic, but the states are the legal foundation. The states wanted to be assured that one state would not override the interests of the others and no state would be completely excluded from consideration. Assume for a moment that one state had developed tremendously and contained over half the population of the United States. Assuming for this argument that they would all vote for the same candidate for president, the smaller states would be disenfranchised. Larger states could ride roughshod over smaller ones.

The states wanted to make certain that they would not be excluded. Therefore, each state was given two senators, regardless of size, and in one house of Congress all states were equally powerful. In the other house, representatives would be apportioned by the size of the population. The House of Representatives, elected every two years, would represent public opinion. The Senate would represent the interests of the states (regardless of population), limit the passions of the people by blocking the House, and make it difficult for the president to propose measures, make treaties and ratify appointments. The Senate was supposed to impose barriers and limits on the president and House. In the European Union, equality and unanimity between members is critical, but the United States chose a much more sophisticated system, combining a deep democratic process, with mediating layers to limit or block public passions.

The electoral college gives each state electors equal to their two senators and the number of representatives apportioned to them. No state has less than three electors, and therefore any state potentially can determine an election, and all regions, no matter how lightly settled, must be considered. Since any state might make the difference in the electoral vote, every candidate must consider each state’s interests.

The United States is a vast nation with highly differentiated interests. From the beginning, the founders were forced to face the fact that holding the nation together required concern for the interests of all states, and not only for those densely settled. A pure democracy would consider the nation’s interests as a whole. The founders were aware that the nation was not a whole, although all regions were needed. Assume, for example, one state holds the country’s entire reserves of a crucial resource, but has a small population. In a direct democracy, its resources could be distributed to other states and compensation ignored. That would breed hostility and secessionism, perhaps even civil war. In any event, in a nation of united states, where all states are needed for geopolitical reasons, their interests have to be recognized.

The system the founders produced compels all candidates to pay serious attention to underpopulated states. In this election, highly populated states like California, Texas and New York overwhelmingly supported Clinton or Trump from the beginning. Smaller states like Nevada or New Hampshire became important. Without the electoral college, the idiosyncratic interests of small states would receive little notice, while a broad national marketing campaign, insensitive to significant regional differences, would decide the result. The centers of population along the two highly populated coasts, where many dismiss “flyover” states, would never have to face the realities of Michigan, Wisconsin or Nevada. In this election, flyover states were able to stun coastal America. They could not do that without the electoral college.

The United States is a geopolitical invention. The 13 original colonies were very different from each other. As the nation expanded westward, even more exotic states became part of the union. Constantly alienating smaller states through indifference could undermine the national interest. The Senate and the electoral college both stop that from happening, or at least limit it. Any state can matter in any election.

You might charge that this is undemocratic. It is. It was intended to be. The founders did not create a direct democracy for a good reason. It would have prevented the United States from emerging as a stable union. They created a republican form of government based on representation and a federal system based on sovereign states. Because of that, a candidate who ignores or insults the “flyover” states is likely to be writing memoirs instead of governing.

Russian Intelligence and Immigration in Europe