U.S. Secretary of State Rex Tillerson visited China over the weekend, meeting with China’s foreign minister on Saturday and President Xi Jinping on Sunday. By all accounts, the trip went well. Media in both countries pointed out that a spirit of cooperation emanated from the meetings. For those who follow U.S.-China relations, this is a marked difference from just a few months ago, when everyone was focused on the potential for a trade war and World War III in the South China Sea.

Two things must be addressed because of this change in tone. First, a little cold water needs to be thrown on the budding spirit of cooperation that has emerged between the two countries. Second, points of contention remain and will define the U.S.-China relationship no matter the optics. The two countries aren’t going to war, but they aren’t going to be best friends, either. 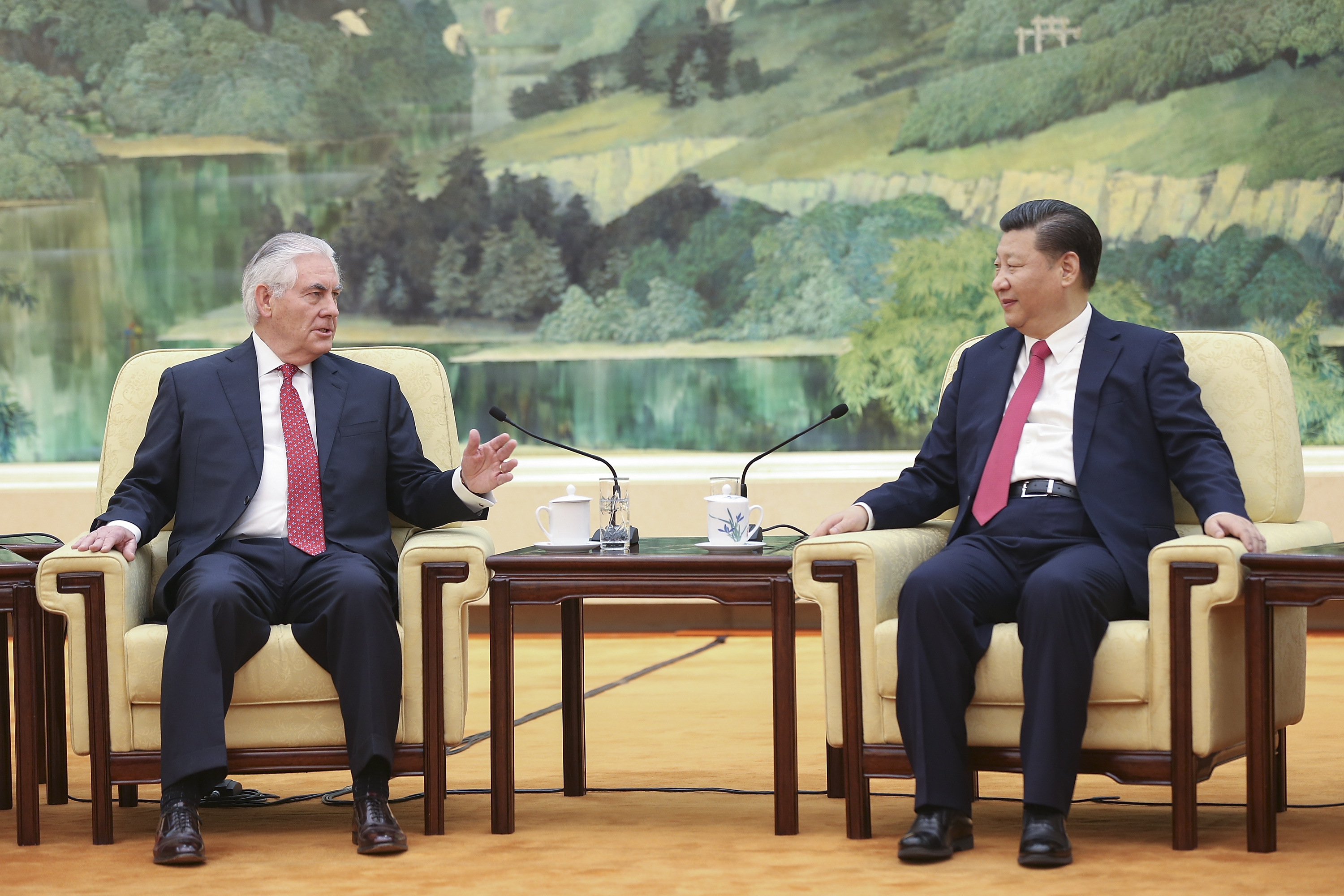 The U.S.-China relationship has always been a dizzying array of diplomatic protocol. When then-President Richard Nixon went to China in 1972, it took months of diplomatic legwork and interpretation of Chinese moves to realize that China was open to changing the nature of the relationship, and to come up with a diplomatic framework whereby China could consent to forge stronger ties. The thaw in relations was jump-started when the U.S. table tennis team was invited to China in 1972. The solidification of the relationship involved a complex word game where the U.S. recognized that there was only one China but still maintained an alliance with Taiwan.

China continues to carry out foreign relations this way, a characteristic of its authoritarian style of government. The Chinese government must present itself with a certain degree of strength to the Chinese people. One of the ways China does this is by controlling the messaging around Chinese relationships with important foreign countries. The Chinese slogan for current U.S.-China relations is a “new model of great power relations.” Chinese officials began using this phrase publicly in 2010, and now it is repeated often by Xi and trumpeted in Chinese media.

This is relevant to Tillerson’s visit because Tillerson seemed to accept the framework of a “new model of great power relations” in his remarks after meeting with China’s foreign minister. In describing the U.S.-China relationship over the past 40 years, Tillerson said, “it has been a very positive relationship built on non-confrontation, no conflict, mutual respect, and always searching for win-win solutions.” If that sounds slightly awkward in English, that’s because it is. Tillerson essentially paraphrased how Xi and other Chinese officials describe China’s “new model of great power relations.”

Some have suggested that Tillerson’s statement amounted to a massive strategic blunder. Either Tillerson was ill-prepared and didn’t know what he was saying, or President Donald Trump’s administration has wilted like a flower after coming out of the gate strong on China relations. Neither of these is an accurate assessment of what Tillerson was doing, and both fail to understand that in the current context of U.S.-China relations, these words are relatively meaningless. They presage no shift in the balance of power, nor do they indicate incompetence or weakness on the part of the new U.S. administration. They line up perfectly with the trajectory of U.S.-China relations since Trump came to power.

The U.S. and China do not see eye to eye in three areas: Chinese territorial claims in the South and East China seas, how to deal with North Korea, and the parameters of the U.S.-China trade relationship. The last one is the most important to both sides. While both countries are dependent on each other, their relationship is heavily weighted in the U.S.’ favor. China needs the U.S. more than the U.S. needs China, and many of China’s current moves, particularly regarding North Korea, attempt to develop as much leverage with the U.S. as possible. These were the same issues the administration of former President Barack Obama faced with China, the only difference being that the Trump administration means to push even harder on the trade issue than its predecessor.

In conversations shielded from cameras and onlookers, the U.S. likely was far more frank and direct. But the U.S. cannot push China on these issues without giving it something in return. U.S. power is greater than Chinese power, but it is not omnipotent. From a pragmatic point of view, cooperating is more effective than antagonizing, especially in the context of an increasingly uncertain situation in North Korea, which was the focal point of Tillerson’s visit to Asia in general.

Xi’s priorities are, first, making sure China is not frozen out of the U.S. market, and second, maintaining an environment of strength and stability in China ahead of this year’s 19th Party Congress. For Tillerson, his statement has little consequence and does not commit the U.S. to anything. This is the price of doing business with China, and as costs go, this is a cheap one for the U.S. But for Xi, Tillerson’s words are invaluable because at a domestic level they allow him to claim that he has made China much stronger.

The importance of maintaining stability in China was underscored on March 20 by two key reports that dealt with the most critical dynamic in China: the relationship between the government in Beijing and the People’s Liberation Army (PLA). The South China Morning Post reported that five PLA army corps will be disbanded, which could affect 200,000 PLA personnel. Two of the corps to be disbanded warrant special attention: the 47th army corps, which was commanded by Guo Boxiong from 1992-94, and the 16th army corps, where Xu Caihou served as political commissar in 1990. Both figures were felled by Xi’s anti-corruption campaign and were singled out in January for having participated in “political conspiracies.” An unrelated report from Chinese news agency Xinhua noted that the Central Military Commission dispatched inspectors to review discipline at the PLA’s lower levels.

The PLA’s inner workings are opaque, and without any corroborating evidence of the South China Morning Post report, relatively little can be said for certain. There have been whispers of dissatisfaction within the PLA and anomalous reports about the central government being surprised by veterans’ protests last October. But those reports have not been confirmed. The Chinese government’s reporting of internal disciplinary moves in the PLA may be a signal that it feels sufficiently confident that the situation is under control. Even so, Xi’s reorganization of the PLA is part of his attempt to consolidate political control, and that means his top priority is maintaining stability and making the government in Beijing look good.

This is where the focus must be directed when trying to understand what is happening between the U.S. and China. The new U.S. administration needs to show that it knows what it’s doing and can get things from China that previous administrations couldn’t. China cannot resist certain U.S. demands, but it needs to get the best deal it can without undercutting the legitimacy of the government in Beijing. The rest of this year should be, at least on the surface, relatively rosy in terms of U.S.-China relations. But disagreements on key issues will remain and will get more serious further on in the Trump administration.

Two powerful countries are trying to figure out how to deal with each other. The important things to keep in mind are the three areas where the two sides have serious disagreements, the domestic political constraints that both countries’ leaders face, and the insignificance of the personalities involved. There’s no new model for great power relations here, no matter how many times Xi asserts there is and no matter what any U.S. official says. It’s the same model for U.S.-China relations with a new set of drapes.

Why Russia Is Boosting Defenses on Its Western Borders