North Korea is a despotic regime in the full sense of the term. It is a regime run for the benefit of the leadership. It is also a hereditary despotism. Kim Jong Un, the current despot, is the grandson of the regime’s founder, and by all evidence his right to rule derives not from any particular skill, but simply because of his bloodline. Like all true despotisms, the country’s fundamental interest is the perpetuation of the regime. North Korea justifies its political system by invoking Karl Marx, but its actual connection to Marxism is that the Soviet Union installed Kim Il Sung, Kim Jong Un’s grandfather, on the throne.

Also like all other despotisms, the despot sleeps uneasily. There have been reports of members of the Kim family being executed by packs of wild dogs and anti-aircraft guns. To some extent this may be South Korean propaganda. But it all becomes more credible after the recent killing of Kim Jong Un’s half-brother in Malaysia by two women who smeared VX nerve agent on his face. Given that he killed another relative, once more by a novel means, it is becoming likely that Kim Jong Un feels insecure. His therapy for insecurity, like all despots, is killing anyone – including relatives – who might threaten him.

This all goes along with a theory I developed on North Korea years ago. I said that North Korea’s goal was to survive the collapse of the Soviet Union and decrease any ideological bond that might remain with China. In order to do this, the North Koreans adopted a strategy focused on convincing the world of three somewhat contradictory things.

The first was that North Korea was an extremely dangerous country, and that it was powerful and likely to strike a devastating blow at any action. This would deter any attempt to attack North Korea or destroy the regime. Second, the North Koreans sought to project an air of insanity. Random, pointless acts of violence and bizarre pronouncements were designed to convince the world that not only is North Korea dangerous, but it is also quite mad. This was intended to persuade everyone that they should not try invading North Korea, or even consider it. Even the whiff of danger would push the North Koreans over the edge. Finally, and paradoxically, North Korea sought to appear weak. Widely publicized famines, ancient factories and the other accoutrements of misery indicated that trying to destroy North Korea’s regime would be pointless. It might topple any day.

A nuclear program firing random ballistic missiles (as we saw this week), insane threats, and evidence of extraordinary poverty and political instability all combined to prevent any action that someone might want to take, assuming anyone wanted to take action. North Korea appeared to be powerful, quite mad, and about to collapse. These are incompatible notions, but they gave everyone good reasons not to attack. Those who feared North Korea, those who believed North Korea was a lunatic bin, and those who felt North Korea was close to collapsing all drew the same policy conclusion: Do not attack North Korea. It was a brilliant ploy, and a regime that had no business surviving the 1990s did. 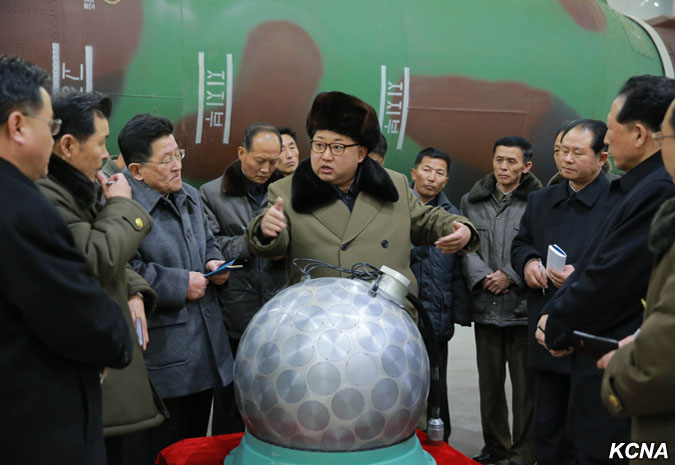 In my view North Korea was not particularly dangerous, not at all crazy, and not weak enough for the regime to fall. It was simply running a hustle so that the Kim family could continue to rule. But a picture out of North Korea, having nothing to do with dead relatives, and a statement by former President Barack Obama to President Donald Trump warning that North Korea will be his biggest problem have forced me to re-examine our position.

That picture, released in March 2016, is of Kim Jong Un standing by a ball, which experts have said might very well be a miniaturized nuclear warhead for a missile. I have never taken North Korea’s nuclear program seriously because it is relatively easy, given enriched uranium or plutonium, to trigger a nuclear explosion underground. However, creating a deliverable weapon is another matter. The nuclear device has to be miniaturized, made small enough to fit on a deliverable missile. In addition, it has to be ruggedized. An intercontinental ballistic missile launches at 10 Gs, vibrating like crazy. Then it enters a vacuum with wild swings of temperature and re-enters the atmosphere at scorching temperatures. At that point, a precision instrument must trigger an explosion. Exploding a nuclear device on a stable, solid platform is a lot easier than exploding one after this wild ride.

Before it can be ruggedized, it must be miniaturized. And what the picture of Kim Jong Un seemed to show was a miniaturized warhead. It is impossible to know whether it has also been ruggedized. My belief continues to be that North Korea built the weapon to deter attacks, both overt and covert. But what used to be a bet about the future is turning into a more immediate matter. My confidence about my understanding of North Korea’s strategy may shift. I don’t think I’m wrong, but the cost of being wrong is pushing the red line.

The North Koreans appear to be pushing themselves into the space between not having a weapon and having one. I would like to think that U.S. intelligence has a very clear view on the state of the nuclear program. But even if they think they do, in intelligence the question is always, do you really know or are you missing something? Have the North Koreans created an illusion, and could U.S. intelligence actually have no idea what’s really going on?

I have assumed that the North Koreans are acting like lunatics because they are trying to intimidate us. A casual look at Kim Jong Un does breed comfort that this is the case. But assume that I’m wrong and that they are acting like lunatics because they are lunatics. If Kim Jong Un is crazy and the North Koreans are actually moving closer to a deliverable weapon, the odds shift. Previously, doing nothing was a low-risk bet. Now doing nothing becomes a high-risk bet. At this point, an error in judging the North Koreans’ mental state would have enormous consequences.

It is easy to say that action will be taken when reconnaissance shows that the warhead has been married to a missile. But failing to see the marriage, seeing it and not understanding it, or seeing it and having meetings instead of taking action can lead to disaster. The intelligence community believes a strategy so finely timed cannot fail, but anything can fail. Thus, if we assume U.S. intelligence is infallible, and we assume that the United States can know and act on information at a split second, then we are fine. If we have any doubts about that, we really aren’t.

I continue to believe that Kim Jong Un understands that crossing the red line of a deliverable nuclear weapon would mean disaster. I don’t think that he will risk an American action that might involve a nuclear strike to ensure that all facilities, above and below ground, are destroyed. I still believe he is bluffing that he has that ace. But given that I called that bet one night many years ago when I was still an optimist, I can’t risk the chance it might be wrong now.

This is the point where geopolitics gets dicey. Geopolitics would dictate that Kim Jong Un is using his program to deter action against North Korea. He has nothing to gain from carrying out a nuclear strike against anyone. But in a despotism, where relatives turn into pink mist, the notion of systemic constraints becomes dicey. He may be as crazy as he looks. And he might not realize the U.S. can’t risk Los Angeles on the quality of intelligence we are gathering, or my dismissive attitude.

If that picture was of a miniaturized warhead, then it has to be assumed that a ruggedized one will follow shortly. Then Trump will have to face the dark night of decision that every president must face.

The US, Germany and the Strategic Divide in Europe