Russian President Vladimir Putin said on Wednesday that Moscow will “do its best” to prevent any destabilization that could cause a color revolution in Russia and its buffer zone in Eastern Europe. Putin’s remarks come after the media reported that Russian nationals were arrested in Belarus for taking part in anti-government protests in Minsk on March 25-26. Belarusian President Alexander Lukashenko used the arrests to send a message to Putin prior to their meeting on April 3. Lukashenko wanted to make clear that he is still in control of his country, despite recent protests and economic problems. And Moscow needs to keep Minsk on its side. 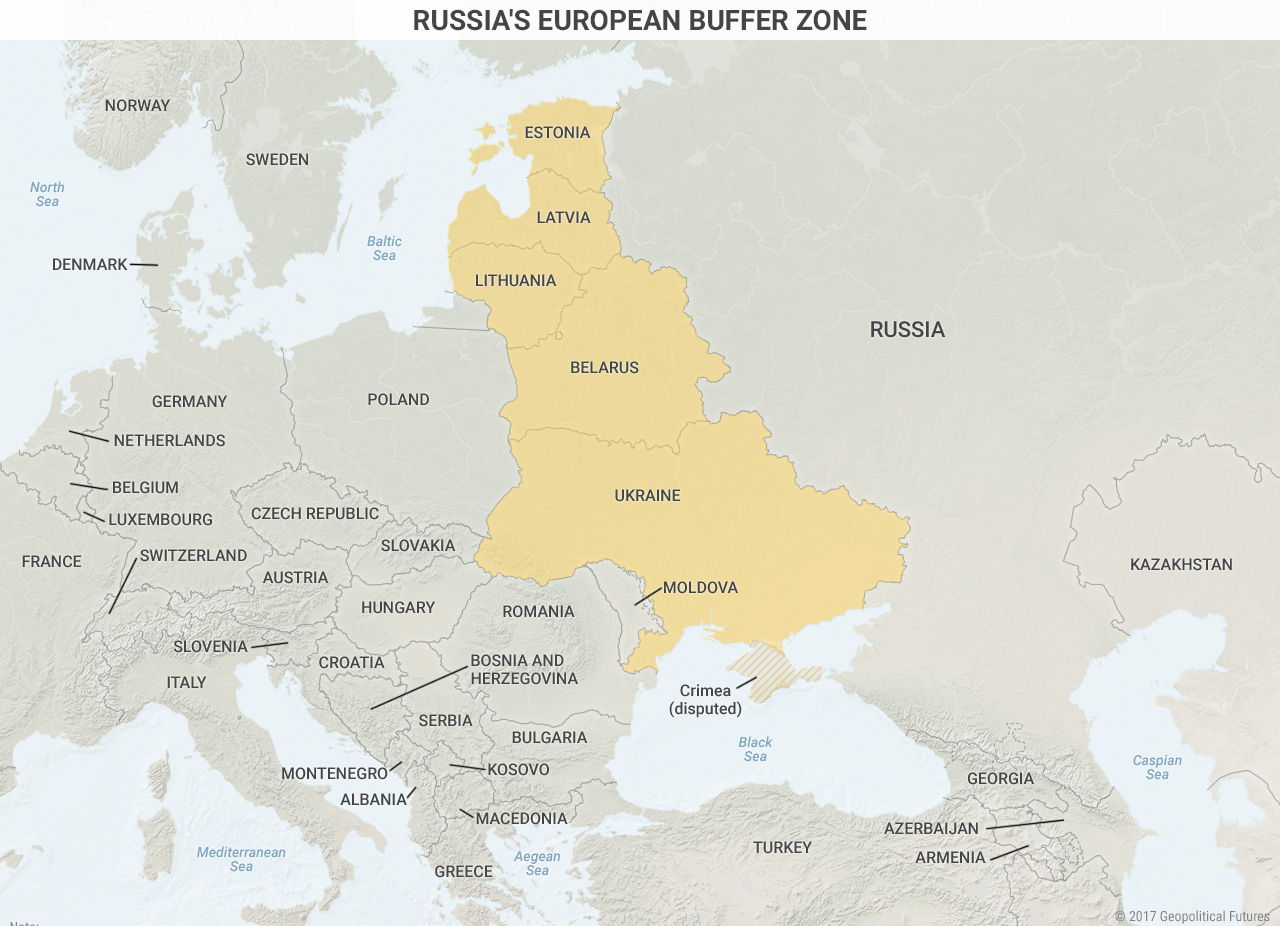 Russia’s essential strategic problem is its vulnerability on its western border. It is susceptible to invasions through the North European Plain and needs access to global trading routes via the Baltic and the Black seas. Therefore, Russia needs to push its frontier or sphere of influence as far west as possible, creating a buffer zone between Western Europe and its borders. Ideally, the Russian buffer zone would comprise the Baltics, Belarus and Ukraine. The Baltics have integrated into the Western alliance system since the end of the Cold War. After losing Ukraine, keeping Belarus in its sphere of influence became even more important for Russia. Belarus is a key part of Russia’s security strategy because the two countries share a joint air defense system. They also have held joint military exercises every four years since 2009, and Russia hopes to strengthen its military presence in Belarus.

To maintain its influence over the country, Russia needs both a friendly government in Minsk and a stable Belarus. But to keep the government friendly, Russia relies on measures that can fuel destabilization. The poor state of the Belarusian economy has sparked anti-government demonstrations, which have continued for months. The recent protests against the “social parasite” tax on the unemployed are some examples. After hundreds of protesters were arrested and 150 were jailed, fear has kept people from returning to the streets. But the economic problems remain. Belarus’ economy has been in recession for more than two years. Russia’s increasing economic problems since the fall in oil prices have had a negative impact on Belarus, which is heavily dependent on the Russian economy. Russia’s ability to support Belarus financially has declined. This has caused socio-economic problems in Belarus and forced Minsk to seek solutions elsewhere. 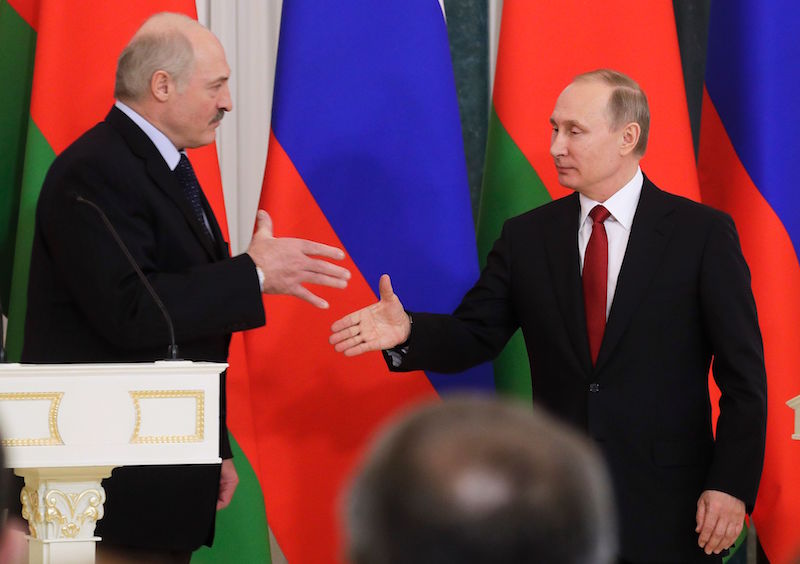 Since 2015, Lukashenko has tried to build better ties with the West, particularly the European Union. While diplomatic relations have grown stronger, financial benefits for Belarus have not followed. Allowing Belarus’ exports to enter the EU market by lifting sanctions in early 2016 helped little since Belarusian businesses had limited experience with this market; most of the country’s exports before 2016 went to Russia. But as Belarus got closer to the West, Moscow increased its pressure on Minsk, fueling more problems for the country.

Russia has banned agricultural imports from Belarus since the EU lifted sanctions in 2016. Belarus and Russia have also been entangled in a natural gas row since last year. While the two countries failed to reach agreement on a new price for Russian gas, Belarus’ debt from Russian gas imports grew and it now has $720 million in arrears from gas supplies. Refinancing the country’s external debt has become more difficult considering the currency devaluations Belarus has suffered – the last one in 2016 was due to the Russian ruble’s devaluation. Last year, Belarus got cash from the Russia-led Eurasian Fund for Stabilization and Development, a sort of International Monetary Fund (IMF) for the Eurasian Economic Union. But the two tranches – worth $800 million together – of the full $2 billion loan came in very slowly. This forced Lukashenko to discuss with the IMF a possible $3 billion standby loan. But the IMF wants reforms that he is not willing to carry out. They would require him to give up some of his power over the economy and implement full restructuring plans monitored by the IMF. Russia doesn’t require any of these actions in exchange for its help.

Nevertheless, Russia can trigger the collapse of the Belarusian economy simply by limiting oil and gas supplies or withholding the next bailout tranche for a few more months. Lukashenko is aware of these possibilities, and in February he tried to hold discussions with the Russian president at the annual investment forum in Sochi. Lukashenko was snubbed by Putin, who refused to meet with him at the time. Lukashenko’s position appeared to weaken internally as anti-government rallies were spreading throughout Belarus. As they continued through March and the economy declined further, Lukashenko had to send a message that would be heard in Moscow. Clamping down on the March 25 protests and arresting Russian demonstrators in Minsk conveyed to Russia that the Belarusian president was still in control of the country.

Putin agreed to meet Lukashenko on April 3. The discussions in St. Petersburg – which took place as the city was on lockdown due to the subway bombing the same day – led to a resolution of the energy dispute and Russian agreement to refinance about $800 million of Belarus’ debt. Putin also promised to renew oil supplies totaling 24 million metric tons per year and to provide about $1 billion in loans. Putin said Gazprom would give Belarus discounts on gas in 2018 and 2019. In exchange, Belarus said it will pay back its debt of more than $720 million for gas supplies.

The list of concessions Russia made to Belarus is impressive, especially at a time when Russia faces its own socio-economic problems at home. This was not a gesture of goodwill toward Lukashenko or Belarus but a difficult decision that Putin needed to make. Putin knows his political opponents in Moscow will challenge these concessions. But keeping Belarus in Russia’s sphere of influence is more important than Russian internal politics. Lukashenko doesn’t face a powerful or united opposition. Most of the businesses in Belarus are tied to, if not dependent on, Russian money, either through direct funding or the Russian market. If Russian support is reduced, Belarus will look to the West, which could lead to a change in government that would not be in Russia’s favor. Therefore, this is a Catch-22 for Russia: It can’t afford to continue spending money on Belarus while it faces problems at home, but it also can’t afford to stop supporting Belarus since another government in the West might instead.