Local pundits, analysts and media have raised the issue of Russian-Belarusian relations reaching their lowest point in at least five years. Belarus’ military doctrine has changed, new agreements were signed with NATO countries, disputes have developed over energy prices and trade regulations, diplomatic protests were launched and extensive media campaigns questioned the integrity of the relationship. Two Russian TV stations have suggested a Ukraine-style uprising could occur in the country. Given Belarus’ strategic importance to Russia, there is cause to examine the depth and interdependency of this bilateral relationship.

In geopolitical terms, Belarus’ strategic value to Russia is similar to Ukraine’s. Russia is geographically vulnerable. Its core is not only landlocked but also vulnerable to invasion via Europe’s Northern Plain. For this reason, Russia’s national strategy is to move its frontier or sphere of influence as far west as possible. The Baltics, Belarus and Ukraine serve as the critical buffer zone between Russia and Europe, which gives Russia the necessary depth to protect itself and provides additional economic opportunities. 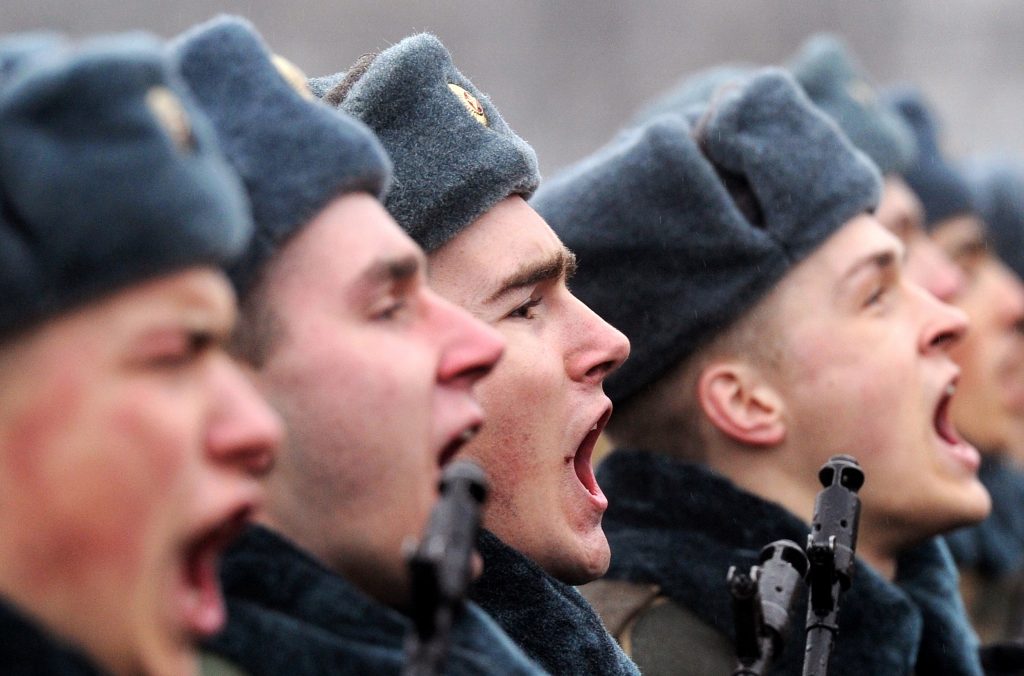 Belarusian military recruits take their oaths in the town of Borisov, 80 kilometers east of Minsk, on Dec. 10, 2016. SERGEI GAPON/AFP/Getty Images

Belarusian President Alexander Lukashenko has been in power since 1994 thanks in large part to the government’s ability to suppress any opposition and its strong ties to Russia. U.S. and European governments traditionally have treated Belarus as firmly within Russia’s sphere of influence. But over the years, Lukashenko has developed the skill of flirting with the West to gain concessions from Moscow, whose political, economic and military power strongly outweighs Belarus’. However, Russia’s recent economic challenges, occurring parallel to the Ukraine conflict and growing tensions with NATO, reshape the scenario in which Belarus operates. The ability of Russia to deliver promised economic benefits to Belarus and Moscow’s hands-off approach to Belarus in exchange for its alliance are coming into question.

The Belarusian economy remains highly dependent on – and therefore vulnerable to fluctuations in – the Russian economy. Exports account for 60 percent of Belarus’ GDP, according to the latest figures available from the World Bank. The country’s National Statistical Committee reports that in the first 10 months of 2016, Russia was Belarus’ main trading partner, accounting for 51.4 percent of foreign trade by volume. Nearly half of Belarus’ foreign direct investment comes from Russia. As a result, Russia’s current economic crisis has strongly impacted Belarus as well. The Belarusian economy contracted by 3.9 percent in 2015 and is projected to contract by 3 percent this year.

Particularly problematic for the bilateral relationship is a dispute over critical energy supplies. Belarus currently relies on Russia for 97 percent of its natural gas needs and is largely dependent on Moscow for hydrocarbons. Belarusian Prime Minister Andrei Kobyakov has demanded for months that Gazprom reduce the price of natural gas to Belarus. The current price is $132 per 1,000 cubic meters, and Belarusian officials say it should be closer to $73. Russia’s revenue from energy exports has tanked since late 2014, and Moscow is reluctant to see further losses. Instead, the Russian response has been to export less oil to Belarus. At the start of the year, Belarus expected to receive 24 million tons of oil from Russia but now expects a total of about 18 million tons in 2016. Last October, Belarusian Energy Minister Uladzimir Patupchyk said Belarus plans to reduce over the next five years its dependence on Russian natural gas by 25 percent. It also is conducting test runs on importing oil from Azerbaijan.

In an attempt to help spur economic growth, the Belarusian government is pursuing measures to better position itself within the Russian-led Eurasian Economic Union (EAEU) as well as with other countries. Within the EAEU, Belarus has pushed for better terms. The Belarusian government believes Russia is using its economic weight within the bloc to adopt measures that unilaterally benefit Moscow. Minsk wants Russia to reduce trade barriers, enable equal conditions for commercial entities, encourage more joint import-substituting enterprises, and pursue coordinated agricultural and industrial policies. Outside this economic bloc, Minsk has looked to the United States, the European Union and China for more trade opportunities. A Belarusian economic delegation accepted an invitation to Washington, during which it held meetings with the Department of Commerce, the Office of the U.S. Trade Representative, the Ministry of Agriculture and the U.S. Agency for International Development. The government’s latest socio-economic development plan for 2020 calls for full normalization of ties with the EU and a more balanced distribution of exports. Minsk envisions export sales equally distributed among the Eurasian Economic Community, the EU and distant allies’ markets.

None of these exploratory options can immediately replace Russia. The EU remains stagnant and therefore not a strong market for growing trade. China’s economy is also on a downward trajectory. The U.S. is the most promising market for trade growth, but establishing such ties will take time given the strong history of political and economic animosity between the two countries. While these moves do not threaten Moscow’s privileged economic standing with Belarus, they do illustrate that Minsk recognizes the weakening of the Russian economy and actively seeks ways to reduce its dependency on Russia down the road.

In the area of security, Belarus is in a delicate situation, not wanting to become the next battleground between Russia and NATO. Belarus and Russia have long-standing military cooperation that includes a joint air defense system. However, Minsk has rejected Russian initiatives to establish an air base on Belarusian soil, a decision that some analysts attribute to wanting to avoid a repeat of Crimea. This sentiment is further expressed in a new military doctrine that states that Belarusian military forces will not take part in military operations abroad, but rather mobilize only for self-defense. The doctrine does say that Belarus will fulfill its obligations as a member of the Collective Security Treaty Organization, but there is still concern within the group that the new doctrine undermines the organization’s integrity.

More polemic is Belarus taking its first steps toward forming defense relationships with NATO members. Last April, Pentagon officials visited Belarus to normalize relations. This was followed by the signing of a U.S.-Belarus statement calling for bilateral military cooperation in 2017. This year, Belarus also signed defense-related agreements with Latvia and Poland. The agreement with Latvia promotes cooperation in airspace surveillance, arms control, NATO’s Partnership for Peace program and military medicine. While these relationships may appear problematic, they pose little risk to Russia’s military influence over Belarus. In the same way that U.S. and NATO troops do not want to engage in a military conflict with Russia over Ukraine, they do not want to create conflict in Belarus, either.

The economic crisis in Russia, ongoing conflict in Ukraine and growing tensions with NATO have clearly changed the geopolitical scenario in which Belarus operates. However, despite Russia’s growing economic and military weakness, Minsk still finds itself securely within Moscow’s sphere. Lukashenko’s traditional strategy of flirting with the West to win concessions from Russia will prove futile for two reasons. First, on the economic front, the country is too dependent on Russia. Too much time is needed to establish any new trade patterns and energy suppliers, meaning Belarus’ ability to protect its economy from the fallout of the Russian economic crisis is limited. Second, in the area of security, the West’s well-established reluctance to militarily engage with Russia over the Ukraine issue also ensures that the West will not carry out actions that would antagonize Russia. While media hype may paint a different picture for local consumption, Belarus remains an unofficial Russian region, whether it wants to be or not.

Myanmar: A New Front in the Indian-Chinese Rivalry