We published our 2017 forecast earlier this week, and one of our predictions is that Russia is in for a difficult year economically. This is because Russia’s economy depends significantly on oil. The price of oil thus far in 2016 has averaged roughly $43 a barrel, a far cry from just two years ago, when oil prices were more than double that figure. According to Russia’s Federal Customs Service, oil-export revenue accounts for 26 percent of total revenue from Russian exports. For an economy in which exports make up almost 30 percent of GDP, that is fairly significant.

Russia has already seen this problem manifest in its ballooning 2016 budget deficit. The budget deficit was $25 billion in 2015, or 2.6 percent of total GDP, according to Russia’s Finance Ministry. But Russia’s finance minister said last September that 2016 budget deficit projections had been revised upward, potentially reaching 3.7 percent of Russia’s GDP by year’s end. This is the reason Russia has been dipping into reserve funds and slashing social services and pension benefits across the board. 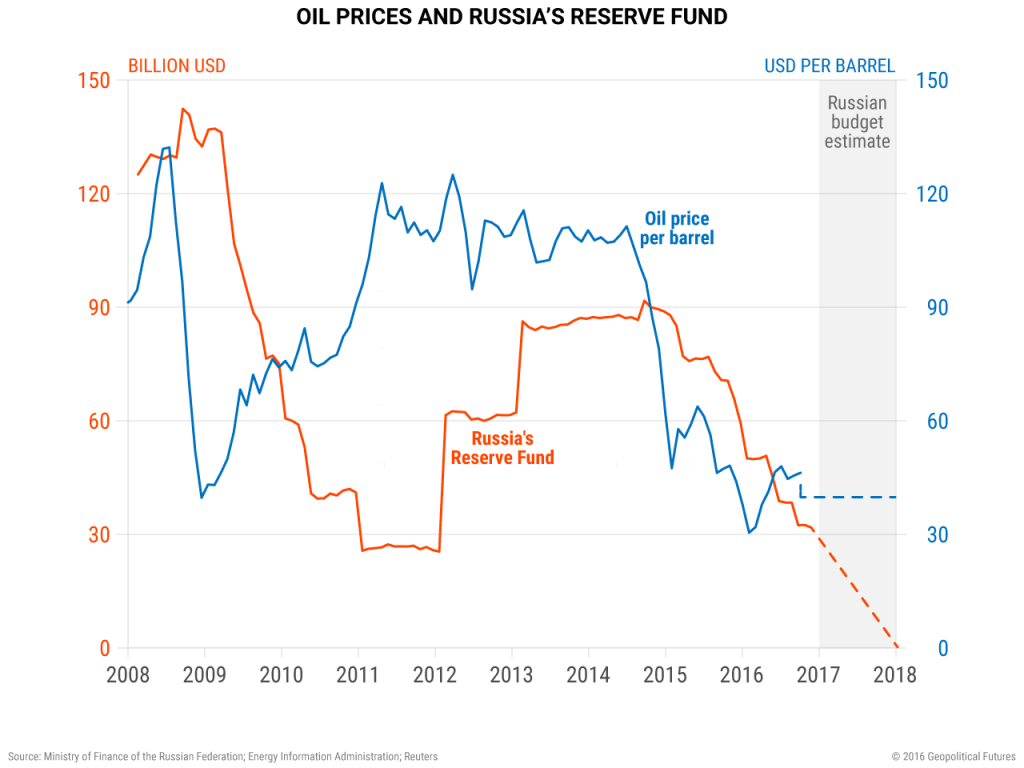 A great deal of ink has been spilled over the rise in oil prices since the Organization of the Petroleum Exporting Countries (OPEC) agreed to production cuts on Nov. 30. Leaving aside that oil has not actually surged upwards – the price for Brent crude at closing on Dec. 14 was only 11 percent higher than on Nov. 28 – instead of speculating on the gyrations of the market it is more interesting to figure out the exact oil price that would be geopolitically significant from Russia’s point of view. Russia’s finance minister said last January that Russia could balance its budget if oil reached $82 a barrel, but we have a doctrinal distrust of politicians’ statements, so we wanted to see if we could discover a similar figure – or a more accurate one – on our own.

Russia reports oil-export revenue in both metric tons and dollars. According to Russia’s Federal Customs Service, from January to October 2016, Russia exported $59.6 billion worth of oil, or approximately 213 million metric tons of crude. Converting metric tons to barrels for crude oil is not simple, as each type of crude differs in density; the generally accepted conversion rate for metric tons to barrels is 7.33 (according to BP’s Statistical Review of World Energy). By analyzing Russia’s export statistics this way, it is possible to make two observations. One is that in the first 10 months of 2016, Russia produced almost 5 percent more oil than it produced in all of 2015, which means it needed to sell more this year than the previous year. The other is that we can roughly estimate that Russia thus far this year has exported approximately 5.13 million barrels of oil per day.

From here we have to make a bit of a leap. Russian statistics show that Russia exported $76.7 billion of oil in 2015, when the average price was $41.85. With data from just the first 10 months of 2016, we have to do a little guesswork. But let’s assume for the sake of argument that in November and December of this year, Russia will have exported the average value it exported in the first 10 months of the year (in reality it probably will be a little more), meaning that total Russian oil exports in 2016 will be approximately $71.52 billion. We also must factor in recent comments by Russia’s energy minister that indicate Russia has, at least verbally, agreed to coordinate its oil production with OPEC’s cuts by reducing production by 300,000 barrels per day (bpd) in 2017. We’ll leave the details of when this cut will be implemented (or whether it actually will be implemented) for another time. For now, if we assume that all of that production is removed from Russia’s average production next year, we conclude that Russia will export roughly 4.8 million bpd of oil next year. 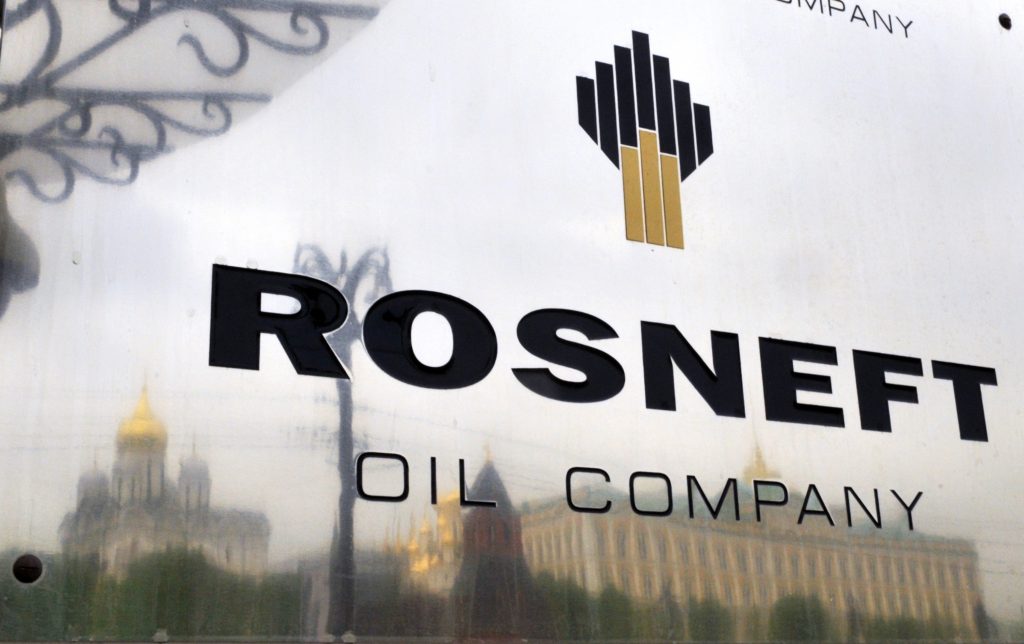 The Kremlin is reflected in the polished company plate of state-controlled Russian oil giant Rosneft in Moscow. DMITRY KOSTYUKOV/AFP/Getty Images

As stated above, Russia expects to run a budget deficit of $48.1 billion in 2016. If Russian oil exports are valued at $71.52 billion in 2016, that means Russia would have to export $48.1 billion more oil in order to break even just on its budget deficit. When you do the math, that comes out to approximately $68 a barrel, assuming daily production of 4.8 million barrels. That is a little lower than Russia’s finance minister suggested earlier in the year, but that is not overly surprising. The State Duma in Russia recently approved next year’s budget, and parts of it, such as certain types of defense spending, are not publicly reported. The finance minister may know of other costs that must be factored in that we don’t, or he may simply have wanted to lower expectations.

What this means is that Russia needs oil prices to increase by about 30 percent from the current position just to break even on the budget. Even that much of a rise would not solve Russia’s economic problems. It would only mean that Russia would be able to continue current levels of spending – which already include cuts to various social services – without having to dip into various reserve funds. Russia’s Finance Ministry has already indicated it expects one of those funds to be spent covering the budget deficit in 2017, which Russia expects to slightly decrease to 3 percent of GDP.

A significant increase in oil prices in 2017 at this point seems unlikely. The market is oversupplied, growth projections for major economies in the world are stagnant at best, and the higher the price increases, the more likely it is that the United States will increase production. OPEC and other oil exporters participating in production cuts may be able to make a dent in oversupply (assuming they break historical precedent and don’t cheat on the quotas), but they won’t be able to solve the problem entirely nor prevent other countries from increasing their own production. Getting caught up in the swings of the market can be addictive, and since we care about such things because of what they will mean geopolitically, we discipline ourselves as much as we can. The above logic shows why oil prices would have to be maintained over at least $68 a barrel for a sustained period before we start getting too excited.