The cover of the latest issue of the Economist features Russian President Vladimir Putin with a blackened face and glowing eyes. It is now official: Putin, and Putinism, are the work of the devil. That doesn’t simply mean that he is evil, but that, like the devil, Putin is powerful enough to face God and compete for souls. It also means that Russia, the country at the heart of the collapsed Soviet Union, has returned and is resuming its place as a global nightmare. From Aleppo to the Democratic National Committee (DNC), the Russians are stalking the earth, terrifying their neighbors and slapping around a feckless United States. If this sounds like 1980, it should. But then, remember that the demon that loomed over the world in 1980 collapsed a decade later.

Russia is an enormously weak country that Putin is working desperately to make appear far more powerful than it is. He is doing extremely well at creating that illusion. There is a saying that perception is reality. That saying is rubbish. If it were true, reality would never have caught up with the perceptions surrounding the subprime crisis. Germany would have won the Battle of Britain, and – for that matter – the Soviet Union would still exist. Perception can buy time and time can, sometimes, change reality. But sometimes all that perception puts off is the inevitable, and in my view that is the case with Russia. 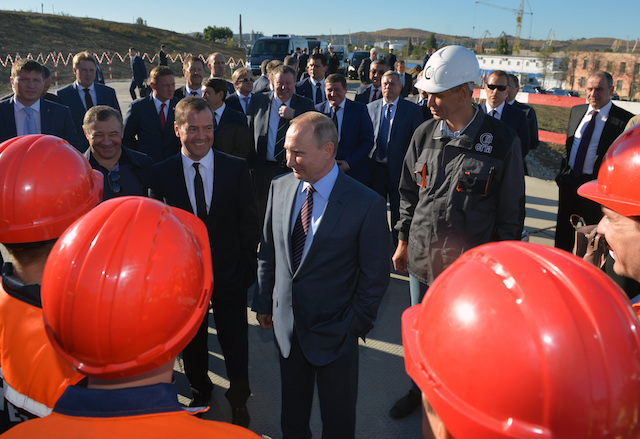 Russian President Vladimir Putin and Prime Minister Dmitry Medvedev meet with workers as they visit the site of the under-construction bridge across the Kerch Strait, which will link Russia and the Crimean peninsula, in Kerch on Sept. 15, 2016. ALEXEI DRUZHININ/AFP/Getty Images

Russia’s fundamental problem is economic. Energy sales underwrite a significant part of the Russian national budget and the price of energy has fallen since 2014. In a society still shaped from the center, a budget crisis at the federal level poses a severe challenge. Russia has been in a deep recession for almost two years. According to the Russian finance minister, the government’s primary reserve fund, which was $91.7 billion in September 2014, will be exhausted by the end of 2017.

During the Soviet decline in the 1980s, and throughout the 1990s, the evidence of economic destabilization was subtler in Moscow and St. Petersburg than in the smaller cities and towns and the countryside that constitute the heart of Russia. It was here that life became disastrous. And this was the region that saw Putin as the solution to its problems. And Putin was, for about a decade, the solution. He did two things. First, he used oil revenues to create the foundations of a bearable, if not affluent, standard of living. Second, he restored the perception that Russia is a big player on the world stage. This was a region of deep patriotism. The poverty that came with Boris Yeltsin generated both a cynicism and a lack of faith in the system. Putin made life bearable and made it clear that Russia was back.

There is a belief that poverty in Russia poses less of a threat to the regime than it does in other countries. This is true, but with a strong caveat. If the Russians believe that their suffering is in the name of a state that stands with and for them, they will endure. This is why Josef Stalin could call on Russians to fight, starve and die. The Russians believed he was with and for them. It was why the Soviet Union collapsed and Yeltsin nearly plunged the country over the edge. No one believed that Leonid Brezhnev, Yuri Andropov, Konstantin Chernenko and least of all Mikhail Gorbachev cared about them. And certainly no one believed Yeltsin did. But Putin made them believe that he cared about them, and he made them feel that he would not only feed them, but that he would make all the suffering worthwhile. He convinced them that he was a winner.

The problem was in an economic failure so fundamental that it is frequently ignored. When Putin took power, wealth was in the hands of a dozen or so oligarchs, and the economy and Russian power depended on energy, which was the source of revenue and leverage over nations reliant on Russian supplies. In many ways, Russia was like Saudi Arabia in the 1970s. Putin’s task was to build a modern economy in Russia using the revenue from energy as investment capital. It was a daunting task and he failed at it. This strategy made Russia dependent on something it didn’t control – energy prices. And since energy prices have historically fluctuated, Putin’s primary strategy was to hope that prices would stay high – but that hope ran out in 2014.

Energy prices fell because there was worldwide economic stagnation and oversupply. A vague hope was that Russia and Saudi Arabia could force the price up by cutting production. But the Saudis were issuing bonds to raise money and the Russians had months to go before reserves were exhausted. Cutting production meant cutting income, but once production resumed to make up lost income, prices would quickly decline. The math didn’t work.

The situation in the regions grew harsher, and Putin was forced to focus on building patriotism to show that the privation was worth it, for it had made Russia great again. But Putin could not simply assert this, he had to show it. He had to demonstrate his power in the only way possible, by confronting the United States.

This became even more important after the pro-Russian government in Ukraine was deposed. Putin pointed to the seizure of something his forces effectively held – Crimea – and the rising in eastern Ukraine as evidence of his power. He gave Russians a sense of being under siege but, given that the rising only reached a stalemate at best, he did not give them a sense of ultimate victory. He therefore dueled with the United States rhetorically, using the apparent clumsiness of President Barack Obama to demonstrate his skill. But in the end, the Russian economy was in a tailspin and Ukraine was lost. The appearance of besting the United States was colliding with the reality of Russian weakness.

The Russian move into Syria was the response. The Russians have no strategic interests in Syria. There have been attempts to figure out why Russia intervened and what its end game is. Its intervention is limited and it is bogged down, just as the Americans are. Even if Aleppo falls, the war isn’t over. Yet they are there.

One theory is that Putin intervened in Syria because he believed Russia’s control over gas supplies to Europe was under threat. Perhaps, but any potential pipeline going through Iraq and war-torn Syria was unrealistic in the first place. Plus, a military operation to secure a pipeline (or to block one, whatever the case may be) makes little sense. Another theory is that Russia wants a naval base in Syria. That is possible, but it makes little military sense. Naval bases and operations depend on extensive logistical support for food, munitions and so on. These supplies are far too extensive to be flown in. And anything that would come to Syria from Russia by sea would come through the Bosporus. That is controlled by Turkey, and the U.S. Sixth Fleet could easily block exits. A naval base in Syria is more a liability than a warfighting asset.

But the Russians were not in Syria to save Bashar al-Assad, control pipelines, build naval facilities or intimidate the United States. They were there so Putin could appear to be more powerful than he was, and that was primarily for the benefit of his public. As the economy weakened and privations increased, he had to give it all a meaning, and Syria made him appear to be restoring Russia’s greatness. Convincing Western public opinion of his power was of secondary value, and in the course he made the cover of the Economist.

A range of impressive but ultimately meaningless actions accompanied all this. Hacking the into the emails of the DNC and John Podesta – assuming Russia was responsible – ultimately seems to have had no impact on the elections, nor did Putin’s praise of Donald Trump. Constant and intense military maneuvers along Russia’s borders alarmed those who wished to be alarmed, but did not cause massive buildups or concern that Putin could use domestically as proof of his power.

We are now at the point where reality diverges from perception. Russia is moving into a hard winter. The opportunity to appear to be a great power by influencing American elections is ending, and the Russians’ participation in the Syrian war is moving into a phase well known to the United States: wondering what they are doing there.

Don’t get me wrong. I was warning about the re-emergence of Russia before 2008. I was confident we were moving into a mini-cold war with Russia. But I was also warning at the time that Russia did not have the ability to win or even survive such a mild confrontation. The Soviet Union fell when it was forced into an arms race it couldn’t afford by Ronald Reagan and when oil prices fell in the 1980s. That has happened again, and Russia is much weaker than the Soviets were. A confrontation on its western front was in the cards and has occurred. And as is the Russian wont, they played a weak hand brilliantly. But now, as I said, the winter comes. 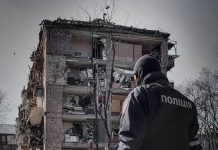