Hamas has produced an updated version of its charter. Hamas leader Khaled Mashaal presented it Monday at a press conference in Doha. Sections of the document were leaked early Monday, and by evening the entire draft was made public in English. Al-Jazeera reported on one of the leaked sections that garnered the most attention earlier in the day. It said that Hamas “considers the establishment of a fully sovereign and independent Palestinian state, with Jerusalem as its capital along the lines of the 4th of June 1967 … to be a formula of national consensus.” This seemed to suggest Hamas was on the verge of at least tolerating Israel’s existence, if not entirely recognizing it. Israel quickly sought to douse the move in cold water. A spokesman for Israeli Prime Minister Benjamin Netanyahu said Hamas is “attempting to fool the world.” An official statement from Netanyahu’s office called the new charter a “smokescreen.”

Based on what the new charter states, there is reason for skepticism. (Read the entire version of the charter in English here.) It says that Hamas will not relinquish a single acre of land in what it describes as historic Palestine. Hamas also still embraces armed resistance in its quest to liberate Palestine “from the river to the sea.” The existence of internal contradictions in the new document doesn’t necessarily preclude the possibility that Hamas is undertaking a monumental shift in its position. But it does raise doubts from the outset. It is also possible that Hamas is only doing this for international legitimacy. Some countries may require the correct formula of words to be enshrined on paper before they can accept Hamas as a legitimate political entity. (That a full copy was immediately available in English buttresses this point.) 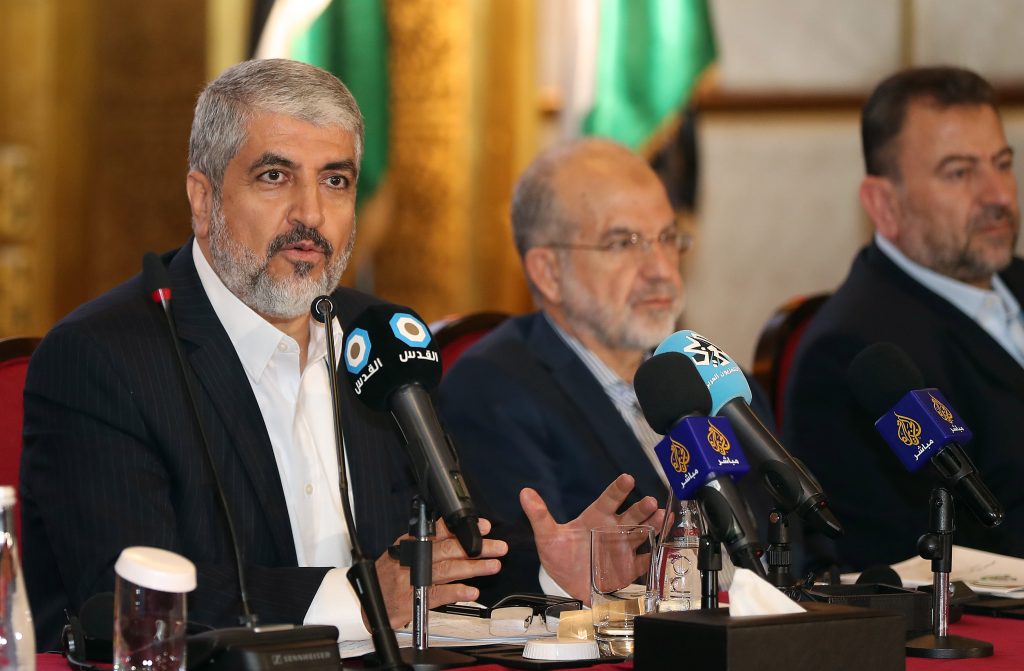 Determining whether Hamas is changing its position requires a better understanding of its current one and how Hamas got here. Hamas was founded in 1987, but the religious currents that were its lifespring had been developing for decades. Hamas saw itself as a religious alternative to the secular Palestine Liberation Organization. Its development was tacitly encouraged by Israel, which viewed the formation of another Palestinian faction as a net positive because it would weaken the overall Palestinian position. In the long run, Hamas did just that. Hamas won U.S.-backed Palestinian elections in the West Bank and Gaza Strip in 2006. The transition of power was not peaceful. The result was that Hamas ruled Gaza and Fatah ruled the West Bank. This split remains in place today.

Hamas gained legitimacy and credibility among Palestinians from its use of force against Israel during the first and second intifadas. Hamas also provided much-needed social services and a version of Palestinian nationalism that embraced the role of Islam. This worked well for Hamas when its raison d’être was resistance, not governance. The moment Hamas took over official governance in the Gaza Strip, the group began to weaken. Hamas tried to become more than a militant organization: It wanted to assume the mantle of the Palestinian people’s rightful representative. This was more difficult in practice than in theory. Gaza is a crowded, isolated, poor enclave blockaded by Israel. With much of the world identifying Hamas as a terrorist organization, Gaza became even more isolated when Hamas took over in 2007.

Hamas continued to fight Israel in small wars in 2008-2009, 2012 and 2014. But its rule in the Gaza Strip has failed to make the daily lives of Gazans any better. This is not due to a lack of desire. Any government attempting to rule Gaza would find it incredibly difficult due to overcrowding and a lack of resources. Hamas’ problem is that it is now held accountable for these failures. It is not just a militant group – it is the political entity responsible for governance. This problem has defined Hamas’ development for the last decade, and different factions have been fighting over how to address this issue the entire time. The faction that wants to moderate Hamas to legitimize its position in the world has been pushing for the publication of an updated charter for years. It finally succeeded.

This faction correctly views the old charter as an albatross. The Hamas Covenant of 1988 is a document rife with allusions to the destruction of both Israel and Jews. It pitches the Israeli-Palestinian conflict as a religious war requiring jihad on the part of all Muslims. Israel has relations with many countries that do not recognize its existence. But Hamas is an enemy that has stated on paper that one of its main missions is to destroy the state of Israel. This gave Israel an easy Palestinian scapegoat and substantiated Israel’s claim that it did not have a willing partner for peace on the other side. Hamas’ actions after Israel disengaged from the Gaza Strip and its violent assumption of power there have been used to confirm this position.

The new charter removes the emphasis on religious conflict, and in its place employs the words and ideals of both nationalism and Western liberalism. The new document uses the language of natural right, declaring that the Palestinian desire for nationhood is an “inalienable right” possessed by the Palestinian people. This is not just clever language. It gets to the heart of the conflict. Article 1 of the U.N. Charter says that one of the U.N.’s purposes is to promote equal rights and the self-determination of all peoples. The problem is that the U.N., the French and American revolutions, and the entire corpus of international law – based as it is on relationships between nation-states – do not have a solution for when two peoples claim self-determination over the same land.

This tension is also reflected in a section of the new charter. It states that the Israeli-Palestinian conflict is political, not religious, and that Hamas’ fight is with Zionism, not with Jews by virtue of their religion. This is an attempt by Hamas to purge its association with anti-Semitism, which is hard to avoid when reading Hamas’ founding charter. The problem with this argument is that it is impossible to separate Zionism from Judaism. An equally appropriate name for Zionism is “Jewish nationalism.” Zionism was just one form of Jewish nationalism that developed in many strands in Europe in the 18th and 19th centuries. The focus on settlement in what was then called Palestine gave Zionism its name, but the notion that Zionism can be evaluated as separate from Judaism is a fallacy.

Why Hamas decided to do this now is unclear. It could be that the internal factional war finally had a victor. It could be that the Saudis pressured Hamas to do it, which would explain the “Gulf Arab sources” that initially broke the news to Reuters. It could be that Qatar, which has housed Hamas since 2012, wants to show that it has power over important things and should be treated with more respect by major regional players.

The why is ultimately less important than understanding how constrained Hamas is. The problem for Hamas is that it does not have any good options. It is currently in an impossible political situation, and moderating its views and garnering acceptance from the international community makes sense. But Hamas cannot turn in its credentials of resistance. It is already struggling for supremacy in the Gaza Strip, and repudiating its stance on fighting Israel would open the door to the Islamic State, which has an active chapter across the desert in the Sinai. This also could facilitate other jihadist groups looking for pockets of discontent in which to grow. If Hamas were to give up the fight against Israel, another group would attempt to fill the gap.

It is unlikely, then, that this will come to much of anything. Hamas wants international legitimacy, but to obtain it Hamas must moderate its positions. Moderating its positions opens up Hamas’ tenuous hold on Gaza to attack. Three weeks ago, Geopolitical Futures investigated the possibility of another war between Hamas and Israel because of dire economic conditions in the Gaza Strip. The publication of a new document and the installation of a new leader after Mashaal steps down does not change the underlying conditions that prompted the investigation. Ironically, Israel is most susceptible to Hamas’ moderation, not to the forces it can bring to bear. The development of a nonviolent Palestinian movement demanding equal rights (or even a less violent one that unambiguously recognized Israel as a country) would put Israel in an extremely difficult position both at home and abroad.

But that is not what this is. This is a low-cost, Hail Mary attempt by Hamas to improve its international standing without giving up its aspirations for an Islamic, Palestinian state without an Israeli neighbor. This document won’t compel Israel to end the blockade. It won’t add money to Hamas’ coffers to pay salaries or provide services to the Gazan people. It won’t compel the region’s Muslim states to accept Hamas or to push Israel into making a deal with Hamas it does not need or want. And it is too weak a facelift for the West to consider recognizing Hamas as something other than the terrorist group that the European Union, the United States, the Egyptians and others categorize Hamas as. It is useful for understanding how difficult Hamas’ position is. But other than that, this “Document of General Principles and Policies” will be consigned to the dustbin of history.

The Limits of China’s Economic Power