The United Nations Security Council (UNSC) has condemned Israeli settlements on the West Bank. The interesting part is that the United States abstained from the vote, which is why it passed. It is likely that President-elect Donald Trump, taking office in less than a month, will pursue a very different policy on Israel than recent administrations have. Neither the United Nations resolution nor Trump’s shift is of great significance. Over the years, throughout the world, UNSC resolutions have been met with indifference. It does not matter what the UNSC says. It matters what the permanent members of the UNSC do. In the case of Israel and Palestine, no one on either side can do very much of significance. As for public opinion, that is fairly well locked into place. There are four camps: those who are pro-Israeli, those who are pro-Palestinian, those who wring their hand and express pieties and those who couldn’t care less. Nothing that happened at the U.N. will change anyone’s mind. 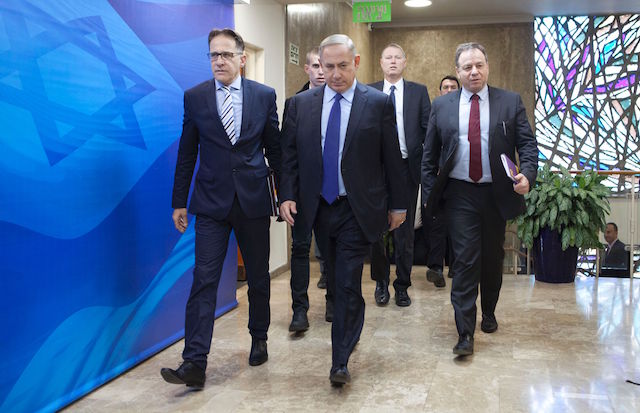 Israeli Prime Minister Benjamin Netanyahu (C) arrives for the weekly cabinet meeting in Jerusalem on Dec. 25, 2016. Israel was defiant over a U.N. vote demanding it halt settlements in Palestinian territory, after lashing out at U.S. President Barack Obama over the “shameful” resolution. DAN BALILTY/AFP/Getty Images

Moral arguments are made, of course. The moral argument for the existence of the state of Israel is that it rectifies an injustice committed by the Romans 2,000 years ago. But 2,000 years is a long time, and the half-life for moral rectification seems past. The claim that the Israelis wanted peaceful coexistence with the Arabs was true, but limited by the fact that they wanted that peace to be on Israeli terms. The claim that this was merely the return of a people to a land where their rights were morally unambiguous strains credibility.

The Arabs’ moral argument is that Israel was made up of European people occupying Arab lands and displacing and oppressing the native population. The problem with this argument is that the history of Islamic expansion was the history of the imposition of its religion and political control on other people. Moreover, the history of the immediate region is one of violence, population displacement and oppression. The state of Jordan was created by the British-supported Hashemite tribe that was forced to leave the west coast of what is now Saudi Arabia and settled there. As for the argument that the creation of settlements in the West Bank is uniquely oppressive, that can only be made by willfully ignoring the slaughter and oppression in the rest of the Arab world.

The Arab-Israeli moral debate is an exercise in hypocrisy by both sides and their supporters. Which is as it should be. When two nations collide, each will make themselves appear the innocent victims and the others moral monsters. It is sometimes like that, but this isn’t such a case. Israel was created through a massive movement of a people from Europe to the Middle East. They used force to create their own state, as is common in history. The Arab world that Palestine is part of has also gone through mass migrations (one is underway now), displaced other people when it could and imposed its own values. Many nations were created as Israel was. The United States, for example. Some were destroyed. Others flourished. Power determined the outcome. Looking at a map of Lebanon, Syria or Iraq will show the way that distinct national or religious groups have done this.

Israel is a settler nation, as are the United States and New Zealand. It settled in a stretch of the eastern Mediterranean coast that Israelis had some historic connection to. Part of it was a response to the rise of nationalism in Europe. If every European cultural entity had a moral claim to a state, so should the Jews. The theoretical position turned into a practical one in World War II. They had thought they were simply Europeans with a different religion and discovered that wasn’t true. The theoretical argument for nationhood and statehood surged. The Jews were a nation. They needed a land on which to build a state. They migrated, partially displaced a population and created a state.

Palestinian nationalism had the same origin in European nationalism. Palestinians had two identities. One was Muslim. The other was Arab. But until the fall of the Ottomans, they were subjects of the Turks. When the Ottomans fell and the Jews began to arrive, so did the idea that they were a distinct people requiring an independent state. Their claims against the Jews were at first ambiguous and based primarily on Muslim or Arab identity. Over time, as with the Jews, the objection to Israel and the basis of their claims against Israel were refined into the idea of nationhood and statehood. They had a land, and they needed to be a nation and build a state. To understand the region, therefore, a historical, not a moral, perspective is needed.

The region’s history has had four phases since 1948. The logical geography of any state in the region is the Jordan River to the east, the Litani River in Lebanon to the north and the deserts in the south, possibly to the Red Sea. In the 1948 Arab-Israeli War, Israel failed to reach the Jordan River or the Litani River but took the Negev Desert in the south. Therefore, Israel was vulnerable and dependent on building an outsized military force. The surrounding Arab states were weak and as a result, this was a period of inconclusive skirmishing.

The next period stretched from 1967 to 1978. In 1967, the Israelis reached the Jordan River and secured its eastern border. The 1967 Arab-Israeli War did not really end until 1973 when the Egyptians and Syrians launched an offensive that the Israelis eventually defeated. This led to the Camp David Accords, the neutralization of Egypt and the end of state-based threats to Israel.

The succeeding period (actually beginning in about 1970 and overlapping the major wars) was a period in which the primary conflict was carried out by Palestinian covert operatives not only within Israel but in Europe and elsewhere. It was a war of terror attacks and reprisals and included extensive Israeli incursions into Lebanon. Supported by the Soviets, the Palestinian operations decreased with the fall of the Soviet Union.

The next phase began in 1987, consisting of the first Intifada, which challenged Israeli control and created the framework for extensive negotiations based on the concept of a two-state solution.

There are now two realities. The first is that the Palestinians are weak. No great power or Arab state has an overriding interest in the creation of a Palestinian state. The Russians are indifferent and the Arabs are concerned about the radicalism of such a state. The Palestinians are also divided, split into the relatively secular West Bank and religious Gaza – the Palestinian National Authority and Hamas. Without unity among the Palestinians, no one can sign an agreement authoritatively or coordinate resistance to the Israelis.

The second reality is that it is impossible to create two states. The Israelis cannot give up the Jordan River line since it is their main defensive position. Nor can they accept a westward shift of the border toward the 1948 lines, as it would make the Israeli heartland (the Tel Aviv-Haifa-Jerusalem triangle) vulnerable to the kinds of rockets fired from Gaza.

The Palestinians can’t accept a state divided between Gaza and the West Bank, without any transport under their control. Nor can they accept Israeli control of the Jordan River line, as that would mean that they remain isolated except for Israel permitting movement – and would mean the Israeli army moving through Palestinian territory. Finally, such a geography would be economic insanity. Palestine would remain dependent on Israel, with its population employed in menial jobs in Israel, passing through Israeli checkpoints.

Therefore, the resolution on settlements and the entire settlement question completely miss the point. The Palestinian problem is that it has no meaningful Arab support, and its support in Europe or the United States consists of meaningless gestures. In fact, many see Israel as an ally against more immediate threats. The Palestinians’ only means of asserting their claims is the Intifada, which is far more painful to the Palestinians than the Israelis. The divisions among the Palestinians make the discussion pointless. The Israelis can’t abandon the Jordan River line without endangering Israeli survival should Arab states shift their strategy. Nor can they accept a movement of the border westward because Palestinian politics could readily move the Gaza problem to Tel Aviv.

Therefore, a two-state solution is impossible and it is inevitable that Israel will strengthen its position in the West Bank with settlements and other means. This is not because Israeli is strong. It is because the Arab world is in a dynamic moment. It does not know what will emerge, and in the end, the Arabs are potentially much stronger than Israel so it must act now, while it can.

The U.N. resolution, President Barack Obama’s decision to abstain from the vote and Trump’s appointment of David Friedman as ambassador to Israel all have no impact because the reality is geopolitically locked in.

What We’re Reading: Helpless and Hopeless