Given that the Islamic State is increasingly losing territory, the world’s focus is on the efforts to dislodge the jihadist regime from its capital in Raqqa. Most observers tend to view the anti-IS campaign as a linear process that over time will lead to the destruction of the jihadist entity. But it is dangerous to assume that IS will simply go quietly into the night. Jordan is one place where IS could strike in order to draw in the Israelis and thus complicate and widen the conflict.

Israeli daily Haaretz reported on March 8 that Israel’s ambassador to Jordan, Einat Schlein, is deeply concerned about Jordan’s stability. Israel’s envoy to Amman gave a pessimistic assessment of Jordan in a briefing to Israeli Defense Forces Chief of Staff Gadi Eisenkot in October. The two officials discussed the situation in Israel’s eastern neighbor, which has seen several hundred thousand Syrian refugees cross its border. Eisenkot reportedly told colleagues that he was disturbed by what he learned from Schlein about Jordan, which shares Israel’s longest border. 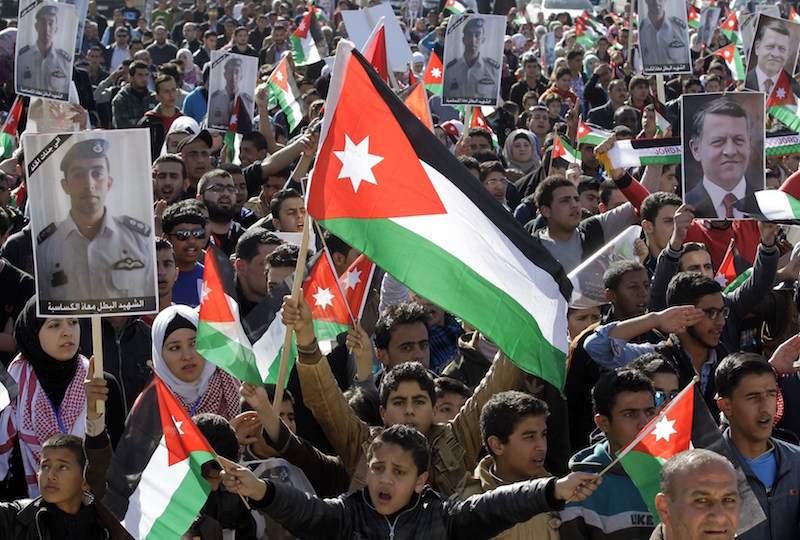 Jordanian students shout slogans and wave national flags on Feb. 5, 2015 in the capital Amman during a rally against the Islamic state and in reaction to the death of Jordanian pilot Maaz al-Kassasbeh (on the placards) by the group’s militants. KHALIL MAZRAAWI/AFP/Getty Images

These developments are important for two reasons. First, Jordan already faces a number of threats. In December, we highlighted why we thought Jordan might destabilize. Sandwiched between the West Bank, Israel, Saudi Arabia, Iraq and Syria, the small country is vulnerable to multiple geopolitical pressures. Jordan could face threats from IS on two of its borders, and its vulnerability to this threat is compounded by its weakening political economy and large presence of Islamist forces.

Second, Jordan is Israel’s only neighbor that thus far has remained stable. Hezbollah in Lebanon has long threatened Israel’s northern frontier, and in the last several years the civil war in Syria has given rise to IS, al-Qaida and many other jihadist groups that pose a danger to Israel. On its southern flank, Israel has to worry about Hamas and since 2011 the instability in Egypt. With Jordan also in the process of destabilizing, Israel has a lot to worry about, especially given that a majority of Jordanians are of Palestinian origin.

Israel has a special security relationship with Jordan that goes back decades, even though formally the two had hostile relations until the 1994 peace agreement that established formal diplomatic relations. Israeli-Jordanian security cooperation, however, has been predicated on the fact that Jordan took on much of the responsibility of containing potential threats. That Israeli officials are worried about Jordan’s future stability is an indication of how precarious the current situation is.

It is unclear what has caused this concern among the Israelis. However, it is not simply the burden of taking in 657,000 Syrian refugees (this is the official figure, though the actual number is likely higher). It is rather astounding that the number of refugees Amman has absorbed equals 10 percent of its population, yet the country has not faltered. Jordan has been in an unsettled position for a while and geopolitically there’s plenty of reason to suspect it already has been considerably weakened. But to understand the nature of the threat that Amman now faces, one has to place Jordan within the context of the war to defeat the Islamic State.

IS is under a great deal of pressure in both Iraq and Syria. It has lost considerable territory in recent months. However, the jihadist entity is not without resources and has been preparing for an assault from the international coalition. IS is a formidable political entity and is not going to disappear overnight.

It has demonstrated that it has formidable organizational capabilities and is shrewd when it comes to strategic planning. Many expect IS will be pushed out of Mosul and then lose Raqqa. However, IS likely is planning for these challenges and has a strategy to deal with these threats. It would be naïve for the coalition trying to defeat IS to believe otherwise. IS has shown that when it is attacked by superior forces it will shift the battle to a time and place more advantageous to its position.

For this reason, it must strike where it is least expected. At the same time, such a place must be vulnerable to instability and within IS’ reach, and it should provide potentially significant dividends. Jordan is one possible target. In recent weeks, Jordan has seen unusual IS activity on its borders with Syria and Iraq. On Feb. 24, IS forces attacked checkpoints on the Iraqi side of the Jordanian border, and on Feb. 20, an IS-affiliated group called the Khalid Ibn al-Walid Army took control of territory in southern Syria along the Jordanian border.

These incidents alone are not enough to create chaos in Jordan. They are, however, indicative of IS’ strategy. It is going to try to attack a weak spot and attempt to use the regional distrust of Israel to its advantage. There is no better way to get the Israelis involved than to launch attacks in Jordan. IS knows that Israel cannot ignore a serious destabilization of the status quo in Jordan.

It is not clear that such a situation will necessarily arise. However, this scenario is not beyond the pale if we factor in Israeli imperatives vis-à-vis Jordan, Amman’s internal and external circumstances and IS’ need to defend its caliphate. These factors as well as the recent indicators mentioned above suggest IS may be turning its sights on Jordan.