Friedman’s Weekly is normally focused on urgent events. This week, I was reminded by the appointment of David Friedman (no relation) as ambassador to Israel how little I think about Israel these days. Given that for most of my life Israel was the central issue in the Middle East and that the Middle East is in chaos, the relative lack of public interest in Israel struck me as important. As significant was the lack of Israel’s active involvement in the region. Hence the title.

Consider Syria. Israel has gone to war with Syria three times, in addition to engaging in casual artillery duels, airstrikes and the rest. Syria has always been a central national security issue for Israel, and the Syrians have regarded Israel as an ongoing threat. Today, a war is raging in Syria that one would think would directly involve Israel. Yet Israel, certainly interested in Syria’s affairs, is not involved. Apart from occasional airstrikes on missiles being brought into Syria by Hezbollah, Israel has avoided involvement, and none of the many antagonists fighting in Syria have had any real interest in Israel. Since 1948, the Arab world has been obsessed with Israel, and Israel has been obsessed with the Arab world. But Israel is letting the fighting in the region run its course. 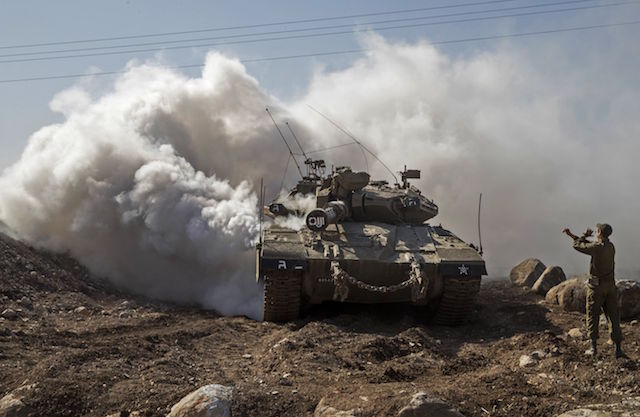 This goes beyond Syria to a broader disengagement of the Israelis and Arabs from each other. The Arabs have more urgent things to worry about than the Palestinian issue or Israeli settlements on the West Bank, and Israel is content to confine itself to quiet attempts to help the Jordanians and Egyptians protect themselves against radical Islamists. Wars have erupted in the Middle East, and Israel wasn’t invited and didn’t invite itself. Given the history of the region since World War II, this is a dramatic shift and requires consideration.

The origin of this geopolitical shift was the Arab Spring. In the eyes of the West, this was a rising of students wanting to create constitutional democracies in Arab states. For the Western media, anyone under the age of 30 with an iPhone is by definition a liberal democrat. The Arab Spring was much less about democracy than about Islamists challenging secular dictators, like Egyptian President Hosni Mubarak or Syrian President Bashar al-Assad. These dictators were the residue of the movement Egyptian President Gamal Abdel Nasser set in motion, rejecting British imperialism, building states based on military rule, and forging close ties with the Soviet Union. Rather than support a pan-Islamic movement, Nasser wanted a pan-Arab movement. Libyan President Moammar Gadhafi, Iraqi President Saddam Hussein, Mubarak and Assad, among others, were the exhausted remnants of pan-Arabism.

The pan-Islamists saw these regimes as a betrayal of Islam. While the Arab Spring rising might have involved constitutional democrats, the real force was yielded by radical Islamists. The Arab Spring was not 1989 in Eastern Europe, it was rather a rising of religious Muslims wanting to institute Sharia law, against the remnants of Arab secularism.

In each country, it took a different course. In Egypt, the army feinted a concession to the Muslim Brotherhood, allowing Mohammed Morsi to become president, then turned around and arrested him, crushed the Muslim Brotherhood and re-imposed full military rule. In Libya, the uprising against Gadhafi had both a religious and tribal element, and Gadhafi would likely have prevailed except for an American and European intervention that left the country without Gadhafi, but with chaos. In Bahrain, Shiites rose against a Sunni government. And in Syria, the Sunnis who hated the Alawites rose against the government and were anointed by the Western press as liberals.

The second reason for Israel’s disappearing act was the American invasion of Iraq and the emergence of the Islamic State from its ashes. IS arose in the chaos of Iraq and then spread to Syria. The existence of IS created an entirely new situation in the Middle East, as IS potentially threatened all regimes in the region, as well as the United States and Russia.

Because of the Arab Spring, the Arabs focused on internal political matters. The question of Israel had to be postponed, while regimes and their opponents fought a life or death battle against each other. The last thing Assad could think about was the Israelis or Palestinians. And most Arab countries faced existential threats from the Arab world they had to deal with.

The Palestinian issue became more important in the West than it was in the Arab world. Much of the Arab concern with the Palestinians was less about Palestinian rights and more about mobilizing their own people. But even those who genuinely were concerned with the Palestinian cause simply lacked the weight or the focus to maintain anything more than perfunctory gestures. Turkey, which confronted Israel over Gaza, restored full diplomatic relations with Israel without much fanfare and proceeded to focus on internal affairs and Syria.

While Egypt was obsessed with the government’s confrontation with the Muslim Brotherhood, Jordan was stable and quietly friendly toward Israel, and Syria was exploding. Israel, on the other hand, was relatively secure. Jihadists might have posed a passing threat in the Sinai Peninsula, but Israel faced no serious threats. Even Hezbollah in Lebanon, with whom Israel had fought a war in 2006, had entered the civil war in Syria and been bloodied. It was not about to start a fight with Israel. Hamas was caught between a hostile Egypt and a hostile Israel and limited its habit of firing rockets at Israeli settlements. Apart from some Palestinians wielding knives, Israel was relatively secure.

Israel, therefore, faced a strategic choice. Historically, Israel was proactive, using its own power to shape situations along its borders. The threats along its borders were very real, but they were preoccupied with each other. Israel intervened twice in Lebanon, in a less dangerous situation. The problem was that the violence in Syria could not be shaped by Israeli forces. It simply outstripped Israel’s capabilities, as it has American and Russian capabilities. Israel could provide intelligence assistance to Egypt’s government, but it could not possibly control the outcome of a civil war, should it break out. These situations were too big for Israel to manage. And the threats were generated far from Israel’s borders.

Israel quietly adopted a strategy of invisibility. It consisted of three parts. First, and most important, it required that Israel take no overt step in any conflict. Instead, Israel would rely on Arab countries to continue what they were doing, on the theory that as long as they were fighting each other, they couldn’t fight Israel. Second, Israel would depend on other powers, such as the U.S., Turkey and Russia, to intervene when the regional balance shifted against their allies, and continue drawing attention away from Israel. Finally, the Israelis used this opportunity to quietly forge understandings with Arab countries that felt endangered by the fighting and would unofficially permit interaction and even alliance with non-Arab countries. Saudi Arabia is the most important example. Even in the case of Iran, which the Israelis saw as an urgent issue, the matter was raised more out of habit than as something that had to be attended to quickly.

To pull this off, Israel had to become unobtrusive. It was a time to do as little as possible overtly, while acting very carefully covertly to open lines of communication that had been closed. The lack of attention on Israel from the Arab world allowed the Israelis to create new realities in the Palestinian areas. Many of these were designed to establish new structures that would become habit by the time peace breaks out in the region. One example was the decision to demand that minarets (towers from which the Muslim faithful are called to prayer) reduce the volume of the call to prayer. It seems like a frivolous and irritating policy, but that is the point. The Israelis are using the surrounding chaos to create new realities among the Palestinians, which will become a matter of course by the time Arabs turn their attention back to the Palestinians, if they ever do.

In one sense, the strategy is the only one available to Israel. It can’t afford to have its forces chewed up in Arab civil wars. And using the time to increase its control of the Palestinians follows from the logic. It’s a clever strategy. But clever strategies that are forced on you have dangers built in. The Americans and the Russians can go home. The Israelis are home. If the Americans and Russians leave, then the outcome of the civil war in Syria and elsewhere becomes unpredictable and most of the potential winners are unfriendly to Israel. Assume for the moment that IS took Damascus. A force that is well-blooded in fighting would then confront Israel. In other words, the problem with counting on the balance of power in war is that when the war stops, the balance collapses.

The Israelis, of course, know this, but they also know that they have little control over the outcome. Afterward, they will have to deal with whatever reality they face. An argument could be made that Israel ought to negotiate a general settlement with the Arabs now, while they are in their strongest possible position. The irony is that there is no one to negotiate with now who isn’t preoccupied with more important things, except for the Palestinians, who are rather isolated for now.

So, Israel will become invisible. It will be there, but it will do everything it can to avoid being relevant to the Arab world. The importance of this shift should not be trivialized. It has changed the way the region has worked since Israel’s founding. It is, ironically, the result of the Arab Spring and the U.S. invasion of Iraq. But as important and interesting, this shift cannot last forever. Whatever new realities Israel tries to create in the space it has, in due course the space will disappear. In the meantime, Israel will bask in being ignored.

Thinking About the Trump-Putin Meeting