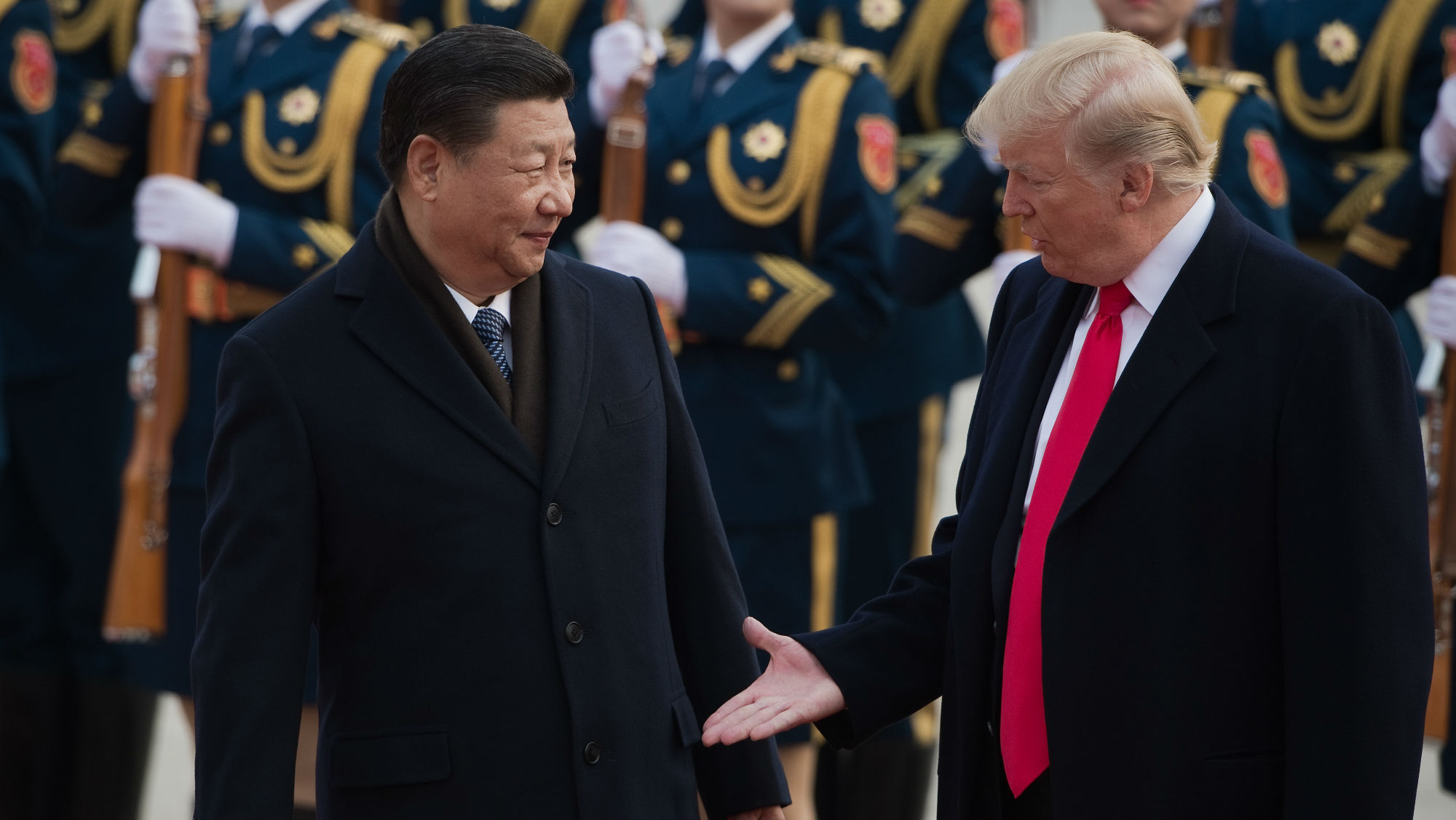 Everywhere you turn, people are sounding the alarm about the decline of American power. The alarms are loudest in the U.S. itself. Those who oppose President Donald Trump believe he is destroying America’s influence and credibility abroad. (The threat to tear up the Iran deal is just one example.) Those who support Trump believe U.S. power has already declined. (Implicit in the slogan “Make America Great Again” is the idea that America is not currently great.) Outside the United States, the U.S. has become punching bag, punchline and declining power all at once. The term “multipolar world,” once simply wishful thinking, is now being uttered by U.S. friends and foes alike.

We’ve seen this all before. After World War II, the U.S. became the undisputed global superpower. It was the only country that had nuclear weapons and was one of the few countries involved in the war that came away from it relatively unscathed at home. The U.S. lost about 400,000 soldiers and a small number of civilians in the war. The Soviet Union, meanwhile, lost around 11 million soldiers and some 7 million to 10 million civilians. While Soviet and European cities were being rebuilt, American cities prospered. It seemed clear to all that the future belonged to the United States.

But it didn’t take long for the luster of unrivaled power to tarnish. The U.S. military machine relaxed as quickly as it had mobilized, and wartime unity gave way to peacetime political debates over government spending and entitlement programs. Within five years, a bipolar world emerged: The Soviets attained an atomic bomb, and the U.S. was caught flat-footed in a war on the Korean Peninsula that ended in a stalemate. Soon thereafter, the U.S. was withdrawing from Vietnam and rioting at home. In 1971, then-President Richard Nixon predicted a world that he said would soon emerge in which the U.S. was “no longer in the position of complete pre-eminence.” Within 26 years of the end of World War II, the U.S. seemed resigned to its fate.

The 1970s were a turbulent decade in America. That turbulence brought to the White House the man who originally coined the slogan “Make America Great Again.” Ronald Reagan had the fortune of being in the right place at the right time. As a leader, his main function was to restore a sense of optimism and confidence to the American people. Whether he accomplished his goals is a topic for others to debate. What is important here is that by the end of Reagan’s term, the Soviet experiment had run its course. In 1987, Reagan demanded that the Soviet Union tear down the Berlin Wall, and within three years of his leaving office, the Soviet Union itself also crumbled. In the U.S., the end of history was declared, and the United States was king once more in the “giddy springtime of the bourgeoisie.”

The 1990s were an unabashedly optimistic time in the United States, but by 2001, doubt had crept back into the American psyche. The dot-com bubble burst, the World Trade Center towers fell, and the U.S. once again engaged in wars in faraway places to secure its interests and preserve its credibility in an increasingly hostile world. The 2008 financial crisis added insult to injury, as a new generation of Americans graduated college with dismal prospects for employment, let alone for pursuing the American dream and building lives more prosperous than those of their parents.

Leaving Out the Biases

Twenty-six years after the Soviet Union fell, the U.S. elected another man who promised to make America great again, and the concept of multipolarity from the Nixon days was resuscitated. Multipolarity is a fancy word with a simple definition. It is the idea that power is not dominated by one country but distributed among multiple countries. China is seen as the eventual challenger to U.S. supremacy, but in a multipolar system, there has to be more than one. Russia, India and Germany are a few of the other contenders.

The problem with discussions about multipolarity is that they are often laced with biases about how people want the world to evolve rather than how the world actually works. Proponents of a multipolar world see events as defined not by the actions or interests of a single global hegemon but rather by the competing interests of different nodes of power. They often argue that a multipolar world, where equal powers cooperate in a way that serves their interests, is more peaceful and desirable than an imperial Pax Americana, where all countries chafe against the overwhelming power of a single political entity.

When Russian and Chinese political figures speak about a multipolar world, they are speaking about the world they want to see, not the world that exists today. Unsurprisingly, the world they want is one in which they have a greater share of power than they have now. It is a particularly useful concept for countries like Russia and China, which have a history of mistrust and very real geopolitical imperatives driving them toward zero-sum competition. Proponents also tend to use the U.S. as both a scapegoat and a lightning rod: The root of the world’s problems is the level of power the U.S. holds globally. The inverse is also sometimes true. Proponents of a unipolar system often dismiss setbacks in American foreign policy because setbacks don’t comport with their unrealistic visions of U.S. hegemony.

Ultimately, whether we live in a multipolar or unipolar world is an objective, not a political, question, and it is an exceedingly important one. The answer affects how we understand the North Korea crisis, developments in Iran and the trade skirmish with China. If the world is unipolar, then the stories dominating the headlines today are all brushfires that the U.S. is struggling to put out and that won’t be of much consequence even five years from now. If the world is on the verge of multipolarity, then these issues are manifestations of the competition between the U.S. and its rising challengers, and the post-1991 way of viewing the world has become obsolete.

Perhaps the simplest way to address this question is to ask what country is driving these events. On the Korean Peninsula, it was Kim Jong Un who accelerated Pyongyang’s nuclear weapons program, but it was the U.S. that deployed three aircraft carriers to the region and threatened fire and fury against the hermit kingdom unless it backed down. Now North and South Korea are negotiating, and even recalcitrant China is getting tough on the North. In Iran, the nuclear deal is under strain because of U.S. threats to withdraw. European countries, led by France and Germany, don’t want to lose access to what Europeans have always wanted out of Iran – cheap oil. If Trump refuses to renew the sanctions waiver on May 12, banks in countries that do not reduce Iranian oil imports will face sanctions. And for most, cheap Iranian oil is not worth the price of U.S. sanctions. As for China, the U.S. made the first move to revamp the bilateral trade relationship, because the U.S. has more leverage in this relationship – China needs to export to the U.S. more than the U.S. needs to import from China.

In other words, the actions of the United States are still driving global developments. And for all of its mistakes (e.g., the Iraq war) and internal problems (e.g., the decline of the middle class’s purchasing power), the U.S. in 2018 is far more powerful than it was when the last discussion of a multipolar world began during the Nixon administration. In 2018, there is no equivalent to the Vietnam War, nor is there anything close to the level of domestic social unrest in the late 1960s and early 1970s, despite what you might see in the press. (This week marks the 48th anniversary of the Kent State shootings. It is difficult to imagine what the reaction to Kent State would have been if there were a 24-hour news cycle back then.) The U.S. has a penchant for hysteria that the current media environment only magnifies, and the world is full of would-be competitors who want to use that crisis of confidence for their own agendas.

Even so, the U.S. is still the world’s pre-eminent power. This isn’t necessarily a permanent state of affairs. If, for example, GPF is wrong about China’s and Russia’s underlying weaknesses, a multipolar world might be closer than I’m suggesting. But that’s a pretty big if. In 2018, the world is still unipolar. The U.S. remains the global center of gravity, and the actions it takes are felt throughout the world. This should not necessarily come as a comfort. With great power comes great responsibility. But the job of an analyst is not to provide comfort; it is to point out where great power currently lies.