The world that emerged from World War II was built on certain assumptions. First, that the origins of the war rested in the rise of nationalism in Germany and the inability of other countries to form an effective and proactive alliance to contain German and destroy the Nazi regime. Second, the economic crisis that preceded World War II was rooted in the collapse of international trade due to protectionism. In the U.S., this was represented by the Smoot-Hawley tariffs. 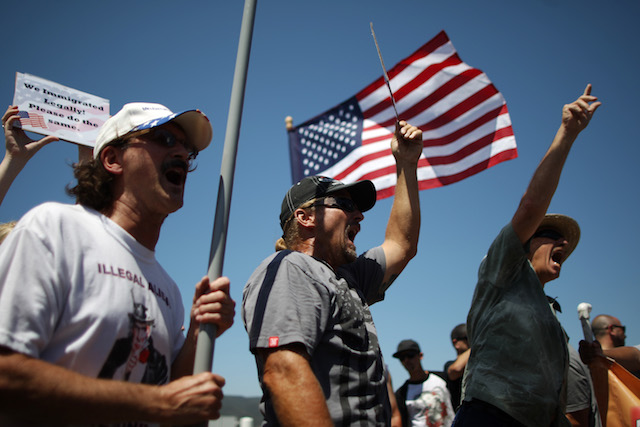 These assumptions framed the post-war world and the Cold War. The U.S., as the leading non-communist power, followed a strategy of containment against the Soviet Union, stretching in an arc from Japan to Norway. The U.S. forged a complex alliance structure whose goal was not to repeat the mistakes of the 1930s and at least contain the Soviet Union, rather than wait for war to begin on its timetable. To maintain this alliance structure, vibrant economies were necessary, both to allow allies to devote resources to their militaries and to demonstrate to the world the superiority of Western capitalism. Economic development depended on economic cooperation and increasingly free trade. The U.S. pressed for European integration, liberalized trade and multinational economic entities like the International Monetary Fund and the World Bank.

World War II was seen as revealing the dangers of nationalism and the necessity of international cooperation. What emerged was an internationalist system that wanted to see increasing political, military and economic integration in the West. Internationalism became a moral imperative, not simply a national strategy.

What began as a lesson learned from World War II and a prudent response to containing the Soviet Union became a moral orthodoxy and a moral imperative. In many ways it buried political distinctions. All major parties were internationalists. Some marginal reactionary elements may have bucked the orthodoxy, but on the whole, conservative advocates of the free market and liberal advocates of social justice embraced internationalism. The former saw it as a path to prosperity through trade. The latter saw it as increasing standards of living and creating international standards for internal political behavior.

The distinction between left and right eroded, with social issues taking precedence over economic and strategic issues between the factions. Abortion and multi-culturalism, for instance, divided political parties. Different countries had different emphases, but the doctrine of internationalism dominated the world (except on the margins). Even those that were not going to be liberal democracies, like China, valued the trading system and depended on it. And Westerners believed that if the Chinese had iPods, they would inevitably become like the West. The love of internationalism permeated all levels of society, but it particularly moved business. The period from 1991-2008 was what I call “the giddy springtime of the bourgeoisie.”

Spring is a season and it ends. In 2008, the underside of interdependence showed its hand. Capitalism is prone to financial crises, and one occurred in 2008. In a nationalist environment with barriers between countries – from tariffs to currencies – a financial crisis in one country has the strong potential of being moderated in other countries. The crisis of 2008 tore through the world. The highly integrated banking system, designed to facilitate the free flow of capital and therefore international efficiency, facilitated the free flow of a contagion. The system had lost its ability to protect against contagion. What had been the vehicle of the internationalist spring turned into a multinational disaster. Between financial integration and deep dependence on foreign markets, the contagion savaged Europe, crushed the world’s appetite for Chinese products and ultimately undermined the market for oil. The effects of 2008 are still far from contained.

The 2008 crisis clearly revealed the core weakness of the interdependent system. But the very success of interdependence had been gnawing away at the system for decades. It is true that barring serious malfunction, intensified international integration can increase economic growth on the whole. But human beings cannot make a living off economic growth “on the whole.” Economic growth that tends to benefit one class while leaving other classes poorer than they were before inevitably creates the foundation for political crisis. These problems were not clearly visible until 2008. After 2008 and the decline in economic benefits of internationalism on the whole, the problem of classes and nations came to light. The decline of some classes, such as those that worked for businesses that moved their production elsewhere to take advantage of lower wages, was clearly visible as the tide receded. Some nations, such as those in southern Europe, discovered that economic integration was not so much an opportunity as it was a prison.

It was discovered that with interdependence and integration, individual nations had lost control over their destinies. An impersonal system that seemed to be uncontrolled determined the fate of nations and their populations. It also was discovered that the idea that nations were obsolete might be true for elites, who followed capital where it went, but being Greek was very different from being German, and being Chinese was very different from being American. The nation mattered because where you lived determined how you would experience life. And that experience gave you far more in common with your countrymen than with foreigners. Greek bankers and German bankers may live similar lives. But Greek carpenters and German carpenters don’t.

The year 2008 did not simply reveal the underlying weaknesses of the internationalist position, it also generated a nationalist counter-response. The counter-response was deeply resented by those who continued to be enamored by internationalism, but they had a freedom of movement that their countrymen didn’t. Those below the median income and those who lived in shattered countries were not going anywhere. They were trapped in a reality about which their government could do nothing. The international system was hurtling forward to a frightening and unknown destination. The comfortable ones assumed they would do fine. The uncomfortable ones knew for a fact they wouldn’t be. And they knew that whatever solutions would come would not be a massive global redemption where everyone wins. It would be a hard-fought battle among their own.

This was the crucial shift. It was a shift from thinking in terms of humanity as a whole to a focus on those with whom they lived and the things and people they loved. As their states lost any relevance to the lives they lived, they turned toward nationalism, to the love of one’s own and the shared fate with those who were like them. This meshed with the cultural. Over the years, the argument had been made that national cultures and practices were irrelevant. It was the ideology of internationalism that mattered, an ideology that deplored all distinctions. Distinctions of ethnicity, religion and nation were the hangovers of the catastrophic world that had led to the rise of Hitler.

What followed was an attempt by the internationalist state to suppress what it saw as parochialism, and what those who had benefited least from internationalism saw as the fabric of life. The critical point came with immigration, a global phenomenon. Immigration hit both an economic and cultural chord. From the internationalist perspective, we are all part of one humanity. From the standpoint of the rest, the flow of immigration threatened to shatter the cultural foundations of their lives, as well as put further pressure on their ability to earn a living. But the most jarring outcome was their government’s indifference to this. The flow of migrants required flexibility in culture and a willingness to help out. But for the Greeks, or the lower-middle class in the U.S., it represented a burden placed peculiarly on them. Well-to-do bankers would not live in communities torn by ethnic strife, but those who had already been stunned and buffeted by cultural change would. These were the people least able to endure it.

The result is that throughout Euro-American civilization, the political divide has ceased to be between the left and the right. The new dividing line is internationalist and nationalist. The debate is between those who regard what is now the old system of alliances, mutual responsibility, free trade and transcultural life as essential, and those who regard a globalist perspective as incapable of addressing the vast variability of nations, cultures and classes.

The question now is whether the dominant political and moral culture of 1945-2008 represents the future or whether it is the past, and a failed past at that. It has been 70 years since 1945, and 70 years is a very long time. The world has changed dramatically since the fundamental principles of the post-war world were laid down. As with all ideologies that have been in power so long that people assume they are the only reasonable approach, an inflexibility has set in. With that inflexibility, internationalism has become vulnerable to challenge by forces it can’t take seriously. Internationalism simply doesn’t see the next punch coming. And when the punch lands and internationalism staggers, its first impulse is to declare its contempt for the bad manners of the nationalist.

The battle is in the first stages, but it is a battle that was inevitable. The world is vast and humanity is an abstraction. My place in the world, my town, my culture and my nation are conceptually more manageable. The core principle of liberalism is the right to national self-determination. The instruments of internationalism – alliances, trade agreements and international law – run counter to the principles of national self-determination. They ignore the nation and the right of citizens to govern their nation.

As in all things, the issue is not simple. Internationalism has been dramatically successful in enriching the world since World War II. Its problem is that nationalists charge that only part of the population has enjoyed this wealth, and there are things more fundamental than wealth such as cultural identity and differences. Internationalism is tone-deaf or hostile to cultural identity, which is its weakness. Nationalism has not yet defined the limits of national enclosure.

This has a long way to go. But looking back, it is no surprise that the Republican and Democratic parties are in utter disarray in the U.S. The points of reference they have represented and the dogmas that have driven them have not disappeared, but are forming around the new points of reference: nationalism and internationalism. Neither party knows what to do with those poles. Nationalism may not simply triumph, but internationalism cannot simply stay the way it is.