A Dec. 11 bombing at a major Christian church in Cairo killed some 25 people and wounded at least 50 others. The blast occurred at a chapel adjacent to St. Mark’s Cathedral, the seat of Egypt’s Orthodox Christian Church and home to the office of its spiritual leader, Pope Tawadros II. Early reports suggest that a remote-detonated device, rather than a suicide bomber, caused the explosion. This attack comes two days after a bomb elsewhere in Cairo killed six policemen, an assault claimed by a little-known group called Hasm that Egyptian officials say is linked to the Muslim Brotherhood, which was banned in August 2014. However, after the church bombing, Hasm issued a communiqué saying it was not involved in that attack, and that, on principle, it does not kill women, children, the elderly or worshippers. 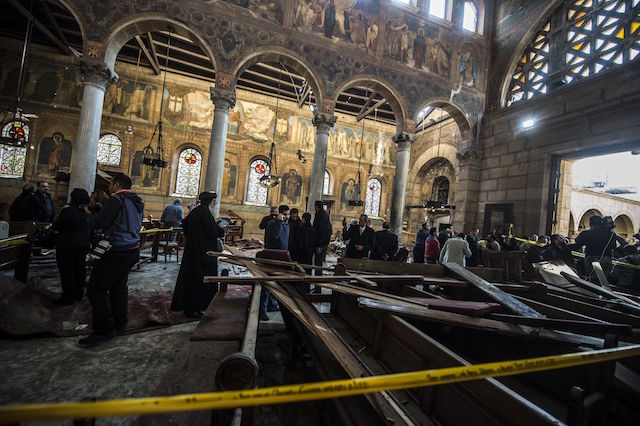 Egyptian security forces and members of the clergy inspect the scene of a bomb explosion at the Saint Peter and Saint Paul Coptic Orthodox Church on Dec. 11, 2016, in Cairo’s Abbasiya neighborhood. The blast killed at least 25 worshippers during Sunday mass inside the Cairo church near the seat of the Coptic pope who heads Egypt’s Christian minority, state media said. KHALED DESOUKI/AFP/Getty Images

The target suggests that some form of Islamists likely could be the perpetrators of this latest attack. The Islamic State (IS) has demonstrated the capability to carry out attacks in Egypt and is known for deliberately targeting minorities – mostly religious. Regardless of who is actually behind this bombing on Egypt’s main Coptic religious facility, we have the broader phenomenon of jihadis disproportionately attacking minority communities in Muslim-majority countries. These include non-Muslim citizens (largely Christians), but because the minority Muslim sects (Shiites, Ismailis, Ahmadis, Sufis, etc.) are more numerous, they have been the focus of the jihadist ire.

The question is why do the IS and other jihadist groups focus so much on these minorities? An easy answer is religious hatred. This is very likely to be the motivation for the suicide bombers who are dispatched to attack gatherings of these minority groups. The foot soldier willing to take his or her own life in order to kill innocent civilians has to subscribe to a simple worldview in which these groups are engaged in religious blasphemy and are allies of the West in the fight against Islam and Muslims.

Certainly, those sending these suicide bombers to their death and the deaths of countless others have no interest in those pulling the trigger knowing too much about why they are committing murder. In fact, anything more than this simplistic narrative could undermine the supply of bombers. However, this superficial view tends to dissipate as you go up the chain of command in a jihadist entity, especially in a movement as sophisticated as IS. Like any other military and intelligence organization, jihadist groups implement the “need-to-know” protocol.

The more senior one is in the hierarchy, the more likely they are aware of how their activities and those of other members of the group fit into the overall objective, i.e., the establishment of their envisioned Islamic polity. Just how many are aware of how every moving part of the entity services the ultimate goal depends upon the size of the organization. Regardless of size, the leadership of the group is not committing scarce resources to attacking these groups solely out of religious bigotry. They would not be expending so much effort if they did not see these attacks as bringing them closer to their goals.

It is crucial to understand the strategy behind these attacks on minority communities. The jihadis understand that they cannot directly fight the regimes in the Muslim world and hope to topple them. They do not possess that capability. Therefore, they have to create the conditions that could lead to overwhelming the regimes. Al-Qaida tried this by striking at the United States on 9/11 in the hope that it would create a breach between Washington and Muslim governments. According to this logic, the U.S. would retaliate by attacking Muslim countries – ideally Saudi Arabia – which would lead to a rising of the masses that the jihadist vanguard would be able to use to overwhelm the regimes.

That did not work – at least not in the way al-Qaida hoped. The American decision to attack Iraq, however, provided a major opportunity for jihadis to advance themselves. The toppling of the Saddam Hussein regime in 2003 brought the Shiites and the Kurds to power at the expense of the Sunnis. The founders of what would a decade later become IS began to work on the sectarian schism between the Sunnis and the Shiites.

Countless attacks targeting Shiites occurred, which inflamed sectarian tensions and provoked retaliation against the Sunni community. The goal was to create enough chaos to overwhelm the Shiite-dominated Iraqi state and undermine the mainstream Sunni leadership. The more the Shiites were attacked, the more they retaliated against the Sunnis – either through law enforcement activity or vigilante militia attacks. In this way, a deeply polarized atmosphere was created, in which IS was able to claim the leadership of the Sunnis, which would explain the fall of Mosul and the declaration of the caliphate in 2014.

In Iraq, the jihadis have had the added advantage of the U.S. move to effect regime change, which created a vacuum that allowed IS to emerge. The same does not exist in other places, such as Pakistan, where we have seen similar attacks on minorities. In recent years, there have been countless attacks on Shiites, Ahmadis, Christians and even Sunnis who the jihadis deem as deviant sects. These are designed to exploit existing fault lines in the countries.

Bigotry against these minorities is widespread among the population that subscribes to deeply conservative interpretations of Islam, which promote intolerance against minority sects. It is this broader sentiment that the jihadis play on. The more they attack, the more they create crises for governments. Though Pakistan has been able to make significant progress in turning the tide against the domestic jihadist insurgencies in recent years, it is not out of the woods yet, as attacks against minorities continue.

Likewise we have seen IS attack Shiites in Saudi Arabia – a country where the government suppresses the minority sect and the Salafist religious creed engenders deep hatred of the Shiites. This is especially the case since the rise of Iran and Shiites in the years since regime change in Iraq. IS knows that when it attacks Shiites, it places the government in a very awkward position. A moral equivalency is created between IS and Saudi Arabia.

The regime, which would otherwise be suppressing Shiites, now is forced to protect the minority community. The way to ensure this is to go after those elements within its own Salafist support base that are aligned with IS. This creates friction between the regime and the broader Salafist landscape. In this way, IS uses attacks on Shiites to create rifts between Saudi Arabia and its historical allies and thus hopes to weaken the regime.

We have seen suicide bombings against Kurds in Turkey as they have engaged in similar attacks, such as the Dec. 10 attack at a stadium. Here again IS is exploiting Kurdish separatism to create space for itself. Its attack on Kurds, whom the government is already trying to contain, forces the government into a complicated situation. Similarly, in Egypt there have been historic tensions involving the Copts. The attack on the cathedral is geared toward increasing these religious tensions where growing Salafism in the country has resulted in greater intolerance for the Christian community. More importantly, it is also likely designed to exploit the broader political crisis involving the Muslim Brotherhood.

The Copts sided with the military when it toppled the Muslim Brotherhood government in 2013 and therefore the group falls into the list of suspects. The government will no doubt crack down on the Muslim Brotherhood, as well as other Islamist groups. The perpetrators of the attack will benefit from this crackdown, which will take place when there is already unrest due to dismal economic conditions. In this way, jihadis benefit from adding to the current worries of the regime.

Thus, jihadis use the minority communities as levers with which to greatly amplify existing problems. They don’t attack these groups simply because they hate them. Instead, it is because there are a significant number of people in the country who are hostile toward them. Jihadis are leveraging this animosity in order to undermine the writ of the governments. Behind the savagery of these attacks lies an insidious strategy.