The Syrian Democratic Forces (SDF) declared on Sunday that it had launched an operation to retake the city of Raqqa – the Islamic State’s de facto capital and the center of gravity of all IS operations in the Syrian-Iraqi theater. The U.S. has been hinting that a Raqqa offensive was in the works for weeks now, and U.S. officials greeted the announcement with optimism. U.S. Secretary of Defense Ashton Carter said this marked the “next step” in the fight to destroy the Islamic State, and a U.S. military spokesman in Baghdad told The New York Times that U.S. warplanes were actively supporting the SDF’s operations. 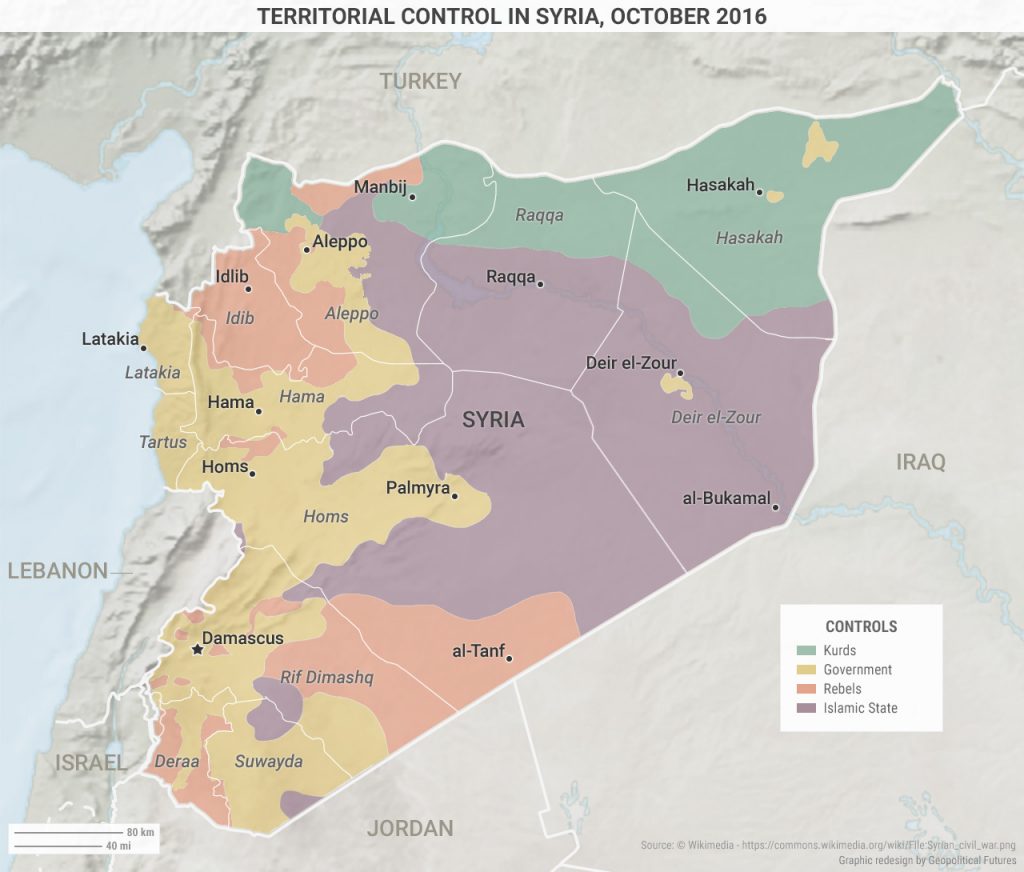 The SDF has successfully rebranded itself in the West. The New York Times now refers to the SDF as a “joint Kurdish-Arab militia.” The SDF, however, is a Kurdish outfit, no matter how much the U.S. would like to Arab-wash the unit to make it more acceptable to Turkey. The bulk of the SDF’s fighters are made up of Syrian People’s Protection Units (YPG), the main militia force fighting on behalf of Syria’s roughly 1.5 million Kurds. They have added small numbers of Sunni Arab and Turkmen fighters to their ranks, but the vast majority of the SDF is made up of Kurdish fighters. The total number of fighters is estimated at 30,000-40,000, according to the U.S. military.

The strengthening of Syrian Kurdish forces is unacceptable to Turkey. It is unsurprising then that the U.S. Chairman of the Joint Chiefs of Staff, Gen. Joe Dunford, made an unannounced visit Monday to Ankara to meet with his Turkish counterpart, Gen. Hulusi Akar, to be on the same page after the SDF announcement. A U.S. Department of Defense press release headline regarding the meeting said “Dunford, Turkish Leaders Create Long-term Plan Against ISIL in Raqqa.” The press release states that Turkey and “the coalition” have agreed to “work together on the long-term plan for seizing, holding and governing Raqqa.”

Among the key things to note, it is not clear exactly to what the U.S. has agreed. The U.S. emerged from this meeting touting its close military relationship with Turkey. Notably, the goal of this relationship apparently is no longer simply to defeat the Islamic State. Mission creep, it seems, has set in before an operation even has begun: According to the DOD, Turkey and the U.S. are discussing holding and governing the city once they have driven out the Islamic State. Where I come from, we call that putting the cart before the horse.

The Turks, on the other hand, came out of the meeting singing a slightly different tune. Turkish Deputy Prime Minister Numan Kurtulmuş said on Monday that Turkey told Gen. Dunford that Turkey’s first priority in Syria currently is driving the Kurdish YPG militia from the town of Manbij. SDF forces seized Manbij from the Islamic State in August, but Turkey is not happy that a predominantly Kurdish force has crossed one of its red lines – the Euphrates River – and seized territory. Turkey has not agreed to any official plan or timeline for an attack on Raqqa. Turkey hasn’t even agreed that defeating IS is its primary goal at this time. Turkey has only agreed that the SDF, which the U.S. said the previous day it supports, should not be involved. 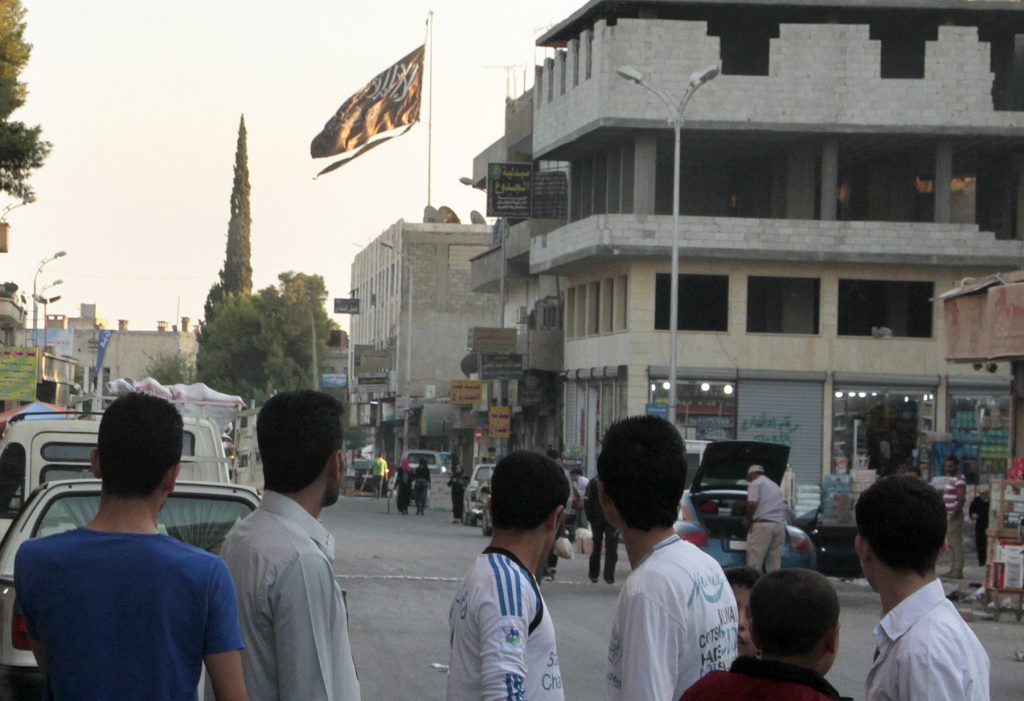 The second thing to note is that while the U.S. claims it has come to an agreement with Turkey on working together to capture Raqqa, it is not clear who is actually going to be fighting. I already have quoted two U.S. officials supportive of the SDF’s declaration of operations on Sunday. Dunford, however, said point-blank that, “We always knew the SDF wasn’t the solution for holding and governing Raqqa.” Dunford instead said that some combination of “the moderate Syrian opposition, the vetted Syrian forces, and the Free Syrian Army forces” would constitute the main assault force on Raqqa.

These are mythical entities at this point. The U.S. spent $500 million in an attempt to train moderate Syrian rebels. It scrapped the program in 2015 when it was revealed that the U.S. had only succeeded at training approximately 60 such fighters. The Free Syrian Army and its various allies have all taken hard losses fighting against Bashar al-Assad’s Russian-backed regime. The centers of its influence are not near Raqqa, and the fighters it has left are battling for their lives against Assad and in no position to join a march on Raqqa. Turkey has said it is capable of handling Raqqa on its own, and intends to do so once the battle in Mosul is completed. 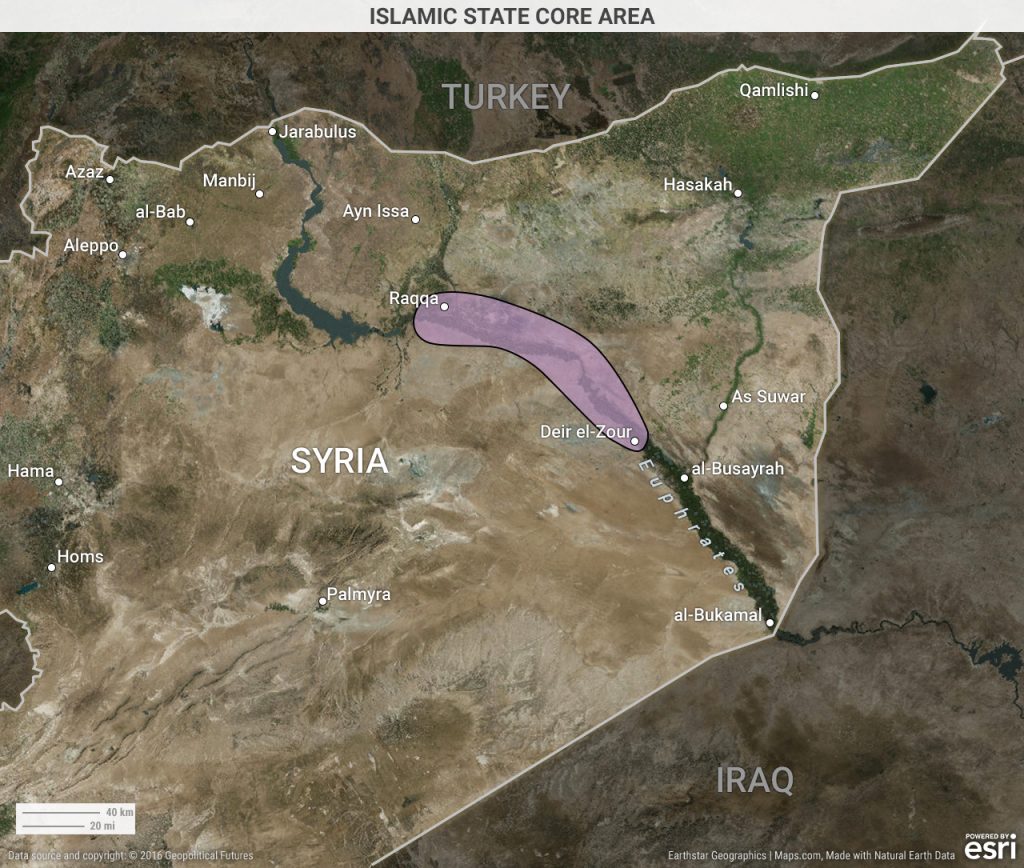 Mosul is a good point of reference for thinking about a potential assault on Raqqa. The offensive on Mosul began just over three weeks ago. The United States has been talking about the offensive on Mosul since April 2015, the original planned starting date for operations before it was pushed back multiple times. The offensive began to great fanfare, but I think we can safely say it is officially bogged down. Iraqi security forces have entered some neighborhoods on the outskirts of the city, and there they remain. Contradictory reports are constant, though not unexpected (tons of chaos exists in a combat zone like this): One day, Iraqi forces have seized Bashiqa from IS, a village not even within Mosul’s city limits, and the next day, Iraqi forces are preparing to enter Bashiqa.

It took the Islamic State six days to conquer Mosul against Iraqi forces. That means the U.S.-backed operation to take Mosul already has lasted more than three times as long as it took IS to seize the entire city. And Mosul is less important to the Islamic State and its operations than Raqqa. Mosul is also in Iraq, which despite its fractious nature has a far more coherent menu of forces that can partner in such a battle, from U.S.-trained and supplied Iraqi security forces to Iraqi Kurdish peshmerga fighters and various Shiite militias. We have pointed out before that this is a sectarian war waiting to happen if and when IS eventually is pushed from the city. But in the short-term, coalition forces in Iraq far outnumber IS fighters in Mosul, and because of the nature of urban warfare, they still can’t make much headway.

All the more so in Raqqa, a much smaller city than Mosul. Raqqa’s pre-IS population was roughly a tenth of the size of Mosul’s at roughly 200,000 people. It is surrounded on all sides by desert, and the Islamic State has had over two years to make its position in the city more defensible. Also, IS is suspected of stationing its most elite fighters and storing the majority of the most advanced materiel in Raqqa. Dunford admitted in the press release that what really had begun was an “isolation phase” that would take months before an actual assault on Raqqa could begin.

U.S. domestic politics has a lot to do with how this narrative is being shaped. President Barack Obama’s administration underestimated the Islamic State’s power from the beginning. Obama famously referred to them as the “JV team” of jihadist outfits. IS, it turns out, is much more capable than a JV team. The Obama administration would like nothing better than to show on the eve of the election and in the twilight of his presidency that progress has been made against the Islamic State and that major efforts are underway to dislodge the Islamic State from its stronghold in Mosul and its center of gravity in Raqqa.

It’s a nice thought, but it’s at variance with the facts. The SDF says its operation for Raqqa has begun. But the SDF doesn’t have enough fighters to pull off the job, isn’t actually in the vicinity of Raqqa, and its presence is unacceptable to Turkey. The U.S. says it has agreed with Turkey on a plan to take Raqqa, but it has left out the answers to all of the important questions, such as who is going to do the taking and when the taking is going to happen. And Turkey remains fixated on its strategic imperative of making sure Syrian Kurds don’t expand their power base, while trying to elbow its way into what’s happening in Mosul. It took about a year and a half from when the U.S. began talking about the Mosul operation to the operation beginning. I’d suspect a similar timeline for Raqqa.