After an extended period of heavy casualties, limited progress and territorial losses to the Islamic State, the Iraqi Security Forces (ISF) announced a pause in their advance on Mosul, thus ending the first phase of the operation to recapture the besieged Iraqi city from IS. From Dec. 21-28, Mosul was largely quiet as the coalition regrouped and planned for the next stage of the battle. On Dec. 29, the ISF announced a second phase in their plan to retake Mosul and resumed operations. IS responded by carrying out a spate of attacks across Iraq on Monday. These attacks simultaneously demonstrate IS’ strength at the strategic level and weakness at the tactical level; though it remains capable of executing attacks across the country, IS is showing its concern for the future of Mosul. Though we still believe this battle favors the ISF in the long term and will continue well into 2017, these recent developments raise questions about IS’ future fighting abilities in Iraq.

The ISF have made significant progress in eastern Mosul since announcing the beginning of the operation’s second phase, retaking six large neighborhoods in the southeast. These include the heavily contested al-Wahda neighborhood, where IS and ISF had been fighting for control of al-Salam hospital for weeks. The Iraqi forces have now reached a major highway and are significantly closer to the Tigris River, which bisects the city. IS fighters have attempted to drive ISF soldiers out of this recently gained territory, focusing their efforts largely on the al-Mithaq neighborhood with suicide bombing attacks, but these attacks have had little impact as the ISF remain firmly in control. During the operational refit, ISF numbers were bolstered by additional troops and federal police forces redeployed from other areas of the country. In theory, an increased number of troops would allow the ISF to better hold captured territory and allow the Counter Terrorism Service (CTS) – the elite fighting unit on the front lines – to focus solely on pushing inward. Though the CTS still has a tough battle ahead, which will only increase in difficulty as it pushes toward the city’s center, this helps to relieve the additional burden of holding captured territory.

The increased number of pro-government Iraqi forces in Mosul also will begin pushing inward from the northern and southern axes. This has already begun in the south. On Jan. 5, the Iraqi Federal Police launched an attack on the international airport and Camp Ghazlani in southern Mosul. In addition to the arrival of reinforcements, the second phase includes the further embedding of U.S. advisers at lower levels, particularly in Mosul’s northeast. These advisers are largely U.S. Special Forces tasked with aiding ISF troops and calling in coalition airstrikes. Though the ISF have firmly refuted claims that these advisers are participating in battle, the Pentagon has confirmed that some of the 5,000 American troops stationed in Iraq are operating within Mosul’s city limits. Reports suggest that coalition airstrikes will increase alongside the increased presence of U.S. advisers in an effort to accelerate the pace of the battle. 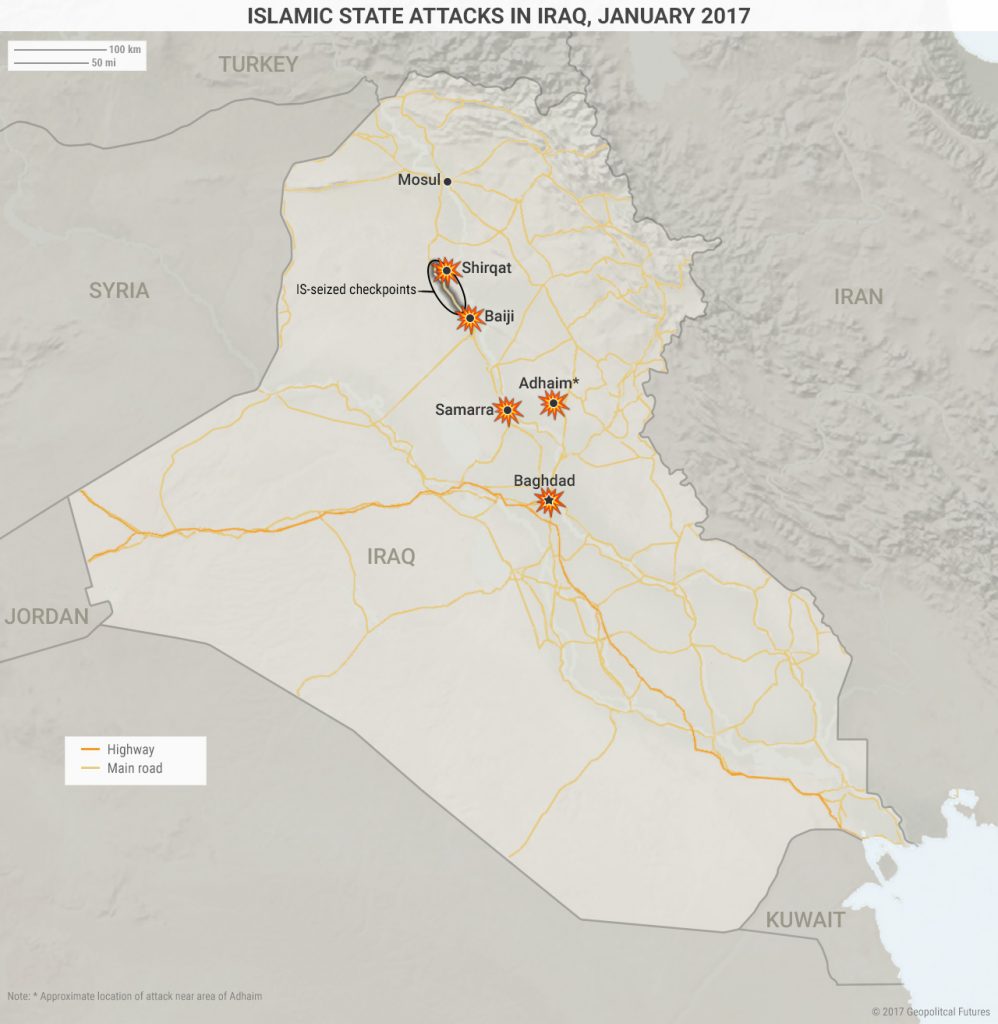 The ISF’s successes so far in this second phase triggered a reactionary series of attacks from IS on Monday, not unlike those seen last October when the battle for Mosul first began. After the battle resumed on Dec. 29, IS began a series of strikes in Baghdad. Car bombs and explosives detonated in markets killed at least 60 people from Dec. 29 to Jan. 2. A small contingent of IS fighters wearing suicide vests entered Samarra, a largely Shiite shrine city 60 miles north of Baghdad, and attacked two police stations, killing at least seven police officers. A second group of IS fighters entered a small village near Adhaim – a strategically important town in Diyala province that runs alongside the Baghdad-Kirkuk highway – where they executed nine Sunni tribal fighters and killed three additional militiamen with mortars launched from outside the village.

A third, larger group of IS fighters traveled along the highway leading from Baiji, an important supply station for the ISF, into Mosul. The goal of this group was likely twofold: to strike at Iraqi territory outside Mosul and to probe the Iraqi supply line for weaknesses. At least one senior-level IS commander was reportedly killed outside Shirqat. His presence indicates that this mission was important to IS leaders.

This group likely began in Baiji, where they attacked an army barracks, killing four soldiers and taking mortar fire before fleeing. The group then traveled along the highway, seizing at least three checkpoints along the way and leaving militants behind to guard them, before ending up in Shirqat. With fewer numbers than they started with in Baiji, the group was unable to enter the city and instead fired mortars from outside city limits, killing at least two civilian children before retreating. The ISF confirmed that the checkpoints had been seized and reported that it had recaptured at least one. 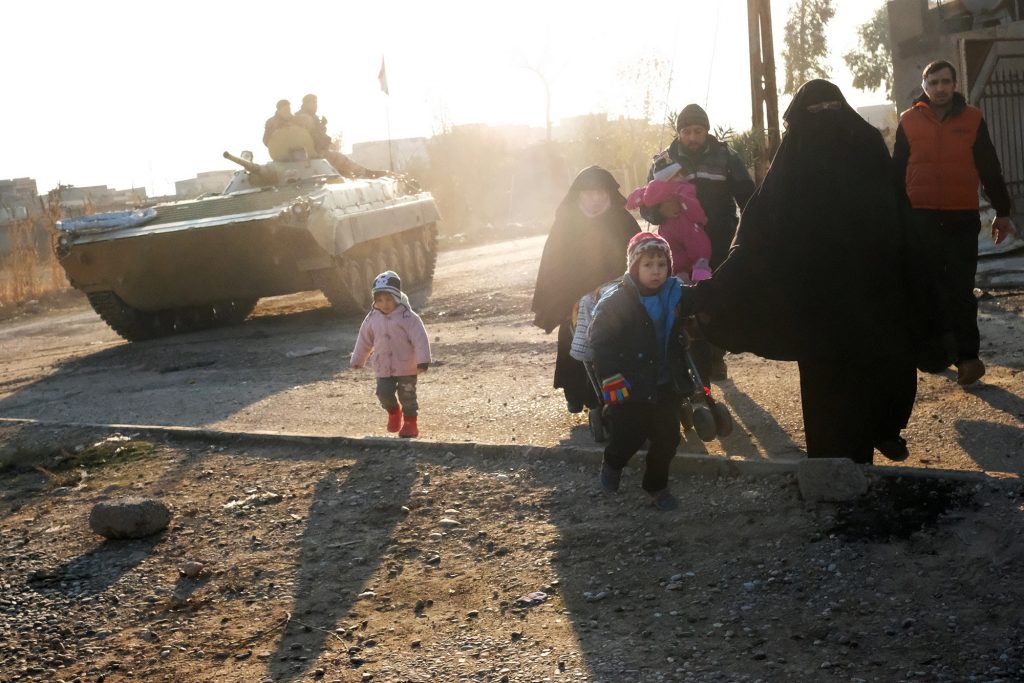 This indicates that supply line disruptions were not IS’ main goal, as it did not leave behind enough fighters to defend the checkpoints. Instead, taking the checkpoints – which were not heavily fortified according to an IS propaganda video that showed three dead militiamen and one pickup truck at one checkpoint – was likely part of the effort to probe for weaknesses on the supply line. The overarching goal of this string of attacks was likely to divert attention and resources away from Mosul, especially due to the increased redeployment of ISF troops from provincial areas.

The IS fighters in these scattered attacks did not come from Mosul. They likely were members of IS sleeper cells in other areas of Iraq, including Anbar province, where IS has kept a low-level presence since 2014 and has been spotted with trucks and supplies from Palmyra. Because of its joint command structure, IS is capable of orchestrating attacks like these that are away from the main battle site. IS’ track record shows that it lashes out in this way when threatened. By demonstrating a continued ability to strike all over Iraq despite suffering losses in Mosul, IS is pressuring provincial leaders to recall recently deployed ISF troops by demonstrating their vulnerability. As IS loses more territory in Mosul, these attacks will continue, spiking when the ISF make significant gains such as crossing the Tigris River. Monday’s attacks are evidence that IS remains capable of hitting targets while on the defensive, and that it is in a vulnerable position in Mosul. However, it is significant that none of these IS contingents had the strength or numbers to follow up these attacks, hitting their targets quickly and fleeing before the situation turned into a large-scale fight. Though IS can obviously launch attacks outside of its strongholds, it may have fewer fighters and resources outside of concentrated areas than previously assumed.

A week’s respite combined with additional troops and increased coalition airstrikes has given the Iraqi forces the upper hand in the battle for Mosul for now. Though the battle is far from over, we will continue to monitor its progress and update readers on the situation on the ground.

In Iraq’s Political Stalemate, Muqtada al-Sadr Is No Kingmaker