During last year’s presidential campaign, Donald Trump advocated for a more disengaged U.S. foreign policy in which involvement in the world would be limited to actions in the interest of the United States. On the surface, this was not an irrational argument. American involvement – particularly militarily – has not yielded the outcomes the U.S. had hoped for in recent years. Nevertheless, there is a difference between advocating for a new course and executing one. The U.S. president must balance the reality of the world, the complexity of U.S. interests and political forces in all countries. In other words, what a president wants and what he must do are two different things.

It was a fascinating week for Trump. On Thursday, he had dinner with China’s president. Given Trump’s campaign statements, this dinner was meant to be a showdown. Instead, by all indications, it was a calm – even routine – conversation between two leaders of major powers. During the dinner, the United States struck a Syrian air base in response to a Syrian chemical attack on a village. On Saturday, Trump ordered a carrier battle group toward North Korea, in response to evidence that the North Koreans were nearing completion of a deliverable nuclear weapon. So much for disengagement. However much a president intends to transform America’s foreign policy, the reality is that he inherits both a reality and an existing foreign policy. The reality doesn’t change for his convenience, nor is foreign policy rapidly transformed. 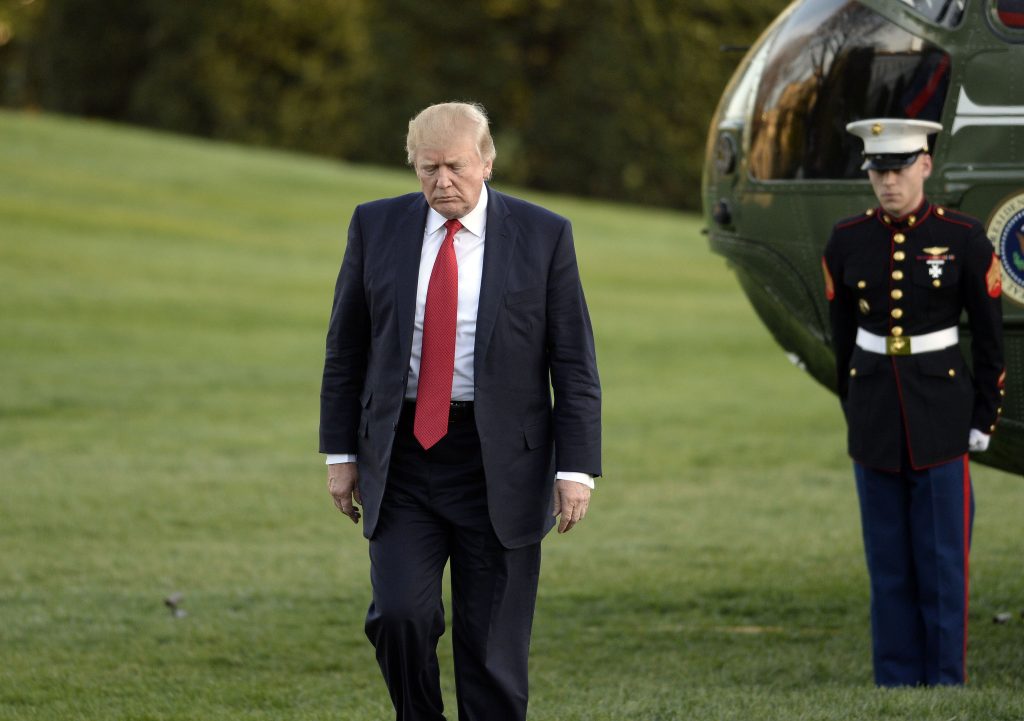 U.S. President Donald Trump walks on the South Lawn after returning to the White House on April 9, 2017 in Washington, D.C. Olivier Douliery-Pool/Getty Images

U.S.-Chinese trade relations developed over decades and have intricately woven the two countries together. Redefining that relationship is, of course, possible, but the consequences of doing so are complex and often painful. There are American interests in that relationship as well as very real costs. Both sides hold cards, and both sides can play them. There is no option for unilateral action that does not impose costs on significant sectors of the American economy. There are constraints on what can be done over a certain period of time.

The United States is currently involved in Syria as part of a 15-year war in the Middle East. The U.S. opposes Syrian President Bashar al-Assad’s Alawite-led regime and Sunni radicals like the Islamic State. The U.S. also opposes Russia’s intervention in Syria. Politically, Trump was critical of his predecessor’s consideration in 2013 of attacks on Assad regime targets, and of President Barack Obama’s general indecisiveness on foreign policy. Last Thursday’s U.S. airstrikes against Syria contradict Trump’s first position. But choosing not to act would have meant emulating Obama’s decision, and Trump would lose credibility as a result. In addition, he would be signaling that he is indifferent to the actions of Assad, who is now a Russian client. Add to this the ongoing issue of Russian influence on Trump’s administration, and powerful constraints dictated a response.

North Korea’s potential acquisition of nuclear weapons opens the possibility – however small – of nuclear strikes on its neighboring countries and the United States. If Trump does nothing and the unlikely becomes real, Trump would face political disaster, in addition to obvious catastrophe. Therefore, he has taken the conventional and prudent step of deploying a carrier battle group. Aside from putting force in place that might be able to deal with a sudden need to strike North Korea, Trump signals to the North Koreans that he is no less hostile to a North Korean weapons program than any of his predecessors.

The difference between what a president wishes, what he said to get elected, and the reality at hand is far from unique to Trump. Obama came to office seemingly believing that the wars against the jihadists were the result of hostility the U.S. projected toward the Muslim world. That hostility, he thought, could be reversed by demonstrating American goodwill. Obama’s famous speech to the Muslim world from Cairo was intended as a major step in changing Muslims’ perception of the United States. It didn’t work. Not only did Obama fail to fully disengage from Iraq, but he also initiated new involvement in Libya. He genuinely wanted a new relationship with the Muslim world.

However, what Obama wanted and the objective reality of the interests of the United States and the groups it was battling were very different things. Obama’s intent to shut down the Guantanamo Bay detention camp was limited by the constraints imposed by American politics. All political leaders operate in a morass of constraints that, to a great extent, render their desires meaningless and compel the direction in which they go. Indeed, the American president is among the institutionally weakest national leaders in the world, and among the most deeply entangled. He also is among the least likely to “decide” on his foreign policy, and the most likely to be compelled by political and geopolitical reality.

All of our lives are caught in a web of reality not easy to escape or change. The reality of a nation-state is far more difficult to elude. Reality evolves in its own time and in its own way. Leaders preside over the shifts far more than they create them. They are constrained by the reality they find themselves in and craft solutions that in retrospect change far less than they might have wished. A presidential term is four years, and American history is far longer. Presidencies are a moment in that torrent of history, and for the most part, presidents are caught up in the deluge as soon as they take the oath of office. Great changes in American history are real, and presidents take credit for them. But it is more a matter of reality shifting under its own massive weight than a presidential decision. President Franklin D. Roosevelt confronted the Great Depression, and his task was to appear in control of an event that was far beyond him. Trump, like any president, is the creation of history far more than its author.

The presidency is, as Theodore Roosevelt said, a “bully pulpit.” The president can set a cultural tone and decide on lesser things. But changing U.S.-Chinese relations, transforming the U.S.’ Middle East policy, or dealing with North Korea in a radically new way are not things that are easily done. All presidents discover the limits of their office. Many are surprised and embittered, and many are crushed. Some flourish. Those who flourish understand that history makes the president, not the other way around.

The Effectiveness of an Air War