A recession in the United States is likely to come in the next two years. It is difficult to determine when a recession will occur based solely on economic activity. Economists argue about the precursors to a recession as a matter of course. I am not making the case that one will happen because I believe I am competent to enter that debate. Rather, I am making the case that one is increasingly likely simply by looking at the frequency with which they occur.

The last recession started in 2007 and ended in 2009. The one before that started and ended in 2001. The two previous recessions ran from 1990 to 1991 and from 1981 to 1982. In these cases, the time between the end of one recession and the start of another was about eight years on average. Between 1945 and 1981, recessions were much more frequent, but obviously something has happened to extend the time between them. 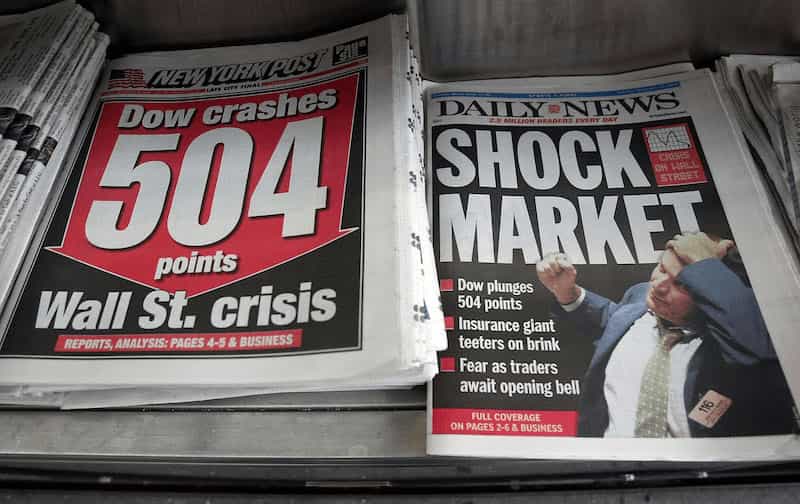 Newspapers are seen for sale at a newsstand Sept. 16, 2008 in New York City. The previous day, the Dow Jones Industrial Average plunged 4.4 percent or 504 points, the worst single-day loss since the terrorist attacks of Sept. 11, 2001. Mario Tama/Getty Images

Eight years have now passed since the last recession, and the U.S. is in the zone for one based on its experience since 1980. A recession is likely sometime between now and 2019. It is always possible that we will set a new post-war record for expansion, but that is unlikely simply because periodic recessions are necessary. During expansions, economies tend to accumulate inefficiencies. Low interest rates allow businesses to survive despite their inefficiency, and this will continue if a recession does not occur. In the current expansion, we have had extraordinarily low interest rates, so even with relatively low growth rates, pruning is needed.

Recessions are unpleasant and hurt some people disproportionately. However, the U.S. recession will likely hurt other countries more than the United States. When combined with other global economic problems, the recession will likely weaken Europe’s anemic recovery and strike another blow at the Chinese. It will also put further downward pressure on commodity prices, considering that the United States is the world’s largest importer and has been, to some extent, the engine stabilizing the international system.

The 2007-09 recession hurt the Chinese tremendously because their biggest export customers were the United States and Europe. In due course, the Chinese slowdown cut China’s consumption of industrial commodities, including oil, hitting countries like Russia and Saudi Arabia. This is part of the global exporters’ crisis I have written about previously. The United States avoided the worst of this because, while it is the second-largest exporter in the world, exports account for only about 12.6 percent of its GDP (the U.S. ranks only 161st in the world in terms of exports as a percent of GDP, according to the World Bank). In part, this lack of dependence on exports helped U.S. GDP grow on its internal engine. More important is that the U.S. is less vulnerable to global downturns than other countries.

The decline in the U.S. economy will inevitably involve a drop in U.S. imports. Under normal circumstances, this slump would not destabilize the system. But we have not been living under normal circumstances since 2008. More precisely, we are now living in a new normal. In the new normal, countries that were driven by exports are now using diminished export demand to simply maintain their economies in the hopes of generating enough domestic demand to replace lost markets. In most cases, they have achieved a fairly precarious balance at this point that is much more subject to destabilization than in previous cycles. A relatively small drop in global demand can have a substantial impact. Thus, a routine U.S. recession will lead to a small global decline, reversing gains in stabilization made in recent years.

The downturn in export demand will have a ripple effect because exporting countries are also importing countries. As American demand contracts, exporters’ economies will be affected and their need for imports will contract as well. This domino effect is normal. The problem is that the international system’s vulnerability has grown dramatically because many countries have become excessively reliant on exports, and this has been accompanied by a general weakness in their domestic economies. Therefore, the ripple effect, while not a tidal wave, will be more substantial than would have been the case before 2008.

The most significant vulnerable countries will be the exporters of manufactured products and industrial commodities, particularly oil. The Chinese and the Germans are the most important examples, given that they are the world’s second- and fourth-largest economies. The Chinese have reduced their reliance on exports as a percent of GDP to some extent, but they remain heavily dependent. They have decreased their dependence by increasing domestic consumption, but this has also led to a decline in their growth rate target to what China claims is a sustainable 6.5 percent a year. A drop in exports would make even this target harder to hit and would limit China’s ability to build domestic demand by contracting exports too quickly.

However, Germany’s export dependence has always troubled us the most. With 46.8 percent of its GDP derived from exports and its banking system in an extraordinarily weak position, Germany needs a stable export base. With the Middle East in chaos and suffering from low oil prices, as are the Russians, Germany’s export purchasers are the Europeans, the Chinese and the Americans. If the appetite for German exports in the U.S. and China declines, it will also affect Germany’s European partners. Thus, the Germans would have trouble maintaining their export rates in the face of a U.S. recession.

A U.S. recession would also put heavy pressure on oil prices. The Saudi-Russian attempt to raise oil prices has pretty much failed. The price of oil is now subject to market forces rather than any concerted action by oil exporters. Historically, as oil prices fell, industrial production increased. That is no longer the case because the problem now is finding customers at any price, not keeping production costs low. Lower oil prices might solve a few problems for exporters of manufactured goods, but they create massive problems for oil exporters.

The most important consequence of this contraction will be on internal social and political forces. A European recession over the next couple of years would increase the pain in southern Europe and likely spread it north. This would strengthen those challenging the European political elites and increase the demand for protectionism. It would present a challenge to the EU and bolster the idea that the flow of goods without any national controls exposes all countries to the consequences of systemic failure. The argument will be that, if the system is failing, remaining part of the system makes little sense.

In China, where political stabilization has been imposed by a dictatorship, the dictator’s credibility will be questioned if Chinese growth rates continue to fall. President Xi Jinping has promised the Chinese a graceful transition from an export-focused economy to one driven by internal demand. To do this, he must control social and political challenges, and maintain a careful and shifting balance between exports and domestic growth. A sudden buckling of exports would make this difficult.

As for Russia and Saudi Arabia, should oil prices be stuck below $50 a barrel, the pressure on these countries’ economies will increase. Both will try to manage their regional interests in the face of deepening internal challenges. The credibility of these regimes depends on their ability to maintain a degree of well-being appropriate to their historical patterns. Those patterns will be difficult to preserve.

The United States will suffer in this situation, but it will not face fundamental crises. However, a recession in the next two years would happen during Donald Trump’s presidency. The American public tends to hold presidents responsible for the economy, even though they have no control over what happens. Therefore, a recession would place Trump in a difficult political position moving toward the 2020 election. The United States would not be as exposed as export-dependent nations, but the political repercussions would require Trump to have established a solid and stable political base by the recession’s onset.

I have no econometric model predicting a recession, although I am not sure that these models have been consistently effective predictors. Rather, I am noting that we are eight years from the last recession, and 10 years has been the longest period between recessions. The precursors to a depression – such as irrational exuberance of asset classes, rising interest rates, a negative yield curve and proclamations that “this time, it’s different” – have at most been modestly appearing. But the clock is ticking. We may set new records on this expansion, but I find it much more likely that a necessary cyclical recession will take place within the next two years. And I am arguing that this time it will be different, in the sense that even a relatively mild U.S. recession will have global implications.