A senior White House aide on Jan. 22 told an NBC reporter that the new White House press secretary had not lied about the crowd size at President Donald Trump’s inauguration, but rather provided “alternative facts.” The White House on Jan. 20 posted a short position paper on a new approach to law enforcement in the United States. The paper said that in Washington, D.C., “killings have risen by 50 percent.”* (Metropolitan Police Department data show homicides in the District of Columbia are down 17 percent year-on-year.)

These two stories raise a significant issue: how to distinguish facts from opinion, falsehoods and values. In philosophical terms, this has always been called the fact-value distinction, but this is not an abstract or academic topic to us – it affects our work every day. We publish geopolitical analysis daily, and more than that, we do so with an explicit and rigorous devotion to objectivity. We support our pieces with what we believe are facts. We try to always provide our sources, but we welcome reader feedback and questions when we don’t. Even if we do not cite every piece of information used in an article, we can provide sourcing for all our claims on request. That is because we rigorously source every bit of information before we publish it. It does not take us long to provide a source for anyone who wants to scrutinize where we get our facts. That is one of our commitments to our readers.

There is an explicit contradiction here: We support our pieces with what we believe are facts. This is somewhat counterintuitive. In an ideal world, belief should not have a place in determining what is or isn’t a fact. Belief should be reserved for the divine – facts are for the mundane. Facts should be demonstrably provable truths about the way the world works. A fact is a fact, in a sense, because it means the same thing to two different people regardless of their viewpoint or perspective. For instance, the U.S. Treasury Department on Jan. 20 reported that the United States’ total public debt outstanding was $19.9 trillion. Whether you are reading this in New York, New Delhi or Mexico City, the United States’ total public debt outstanding was $19.9 trillion on Jan 20. That is a fact. 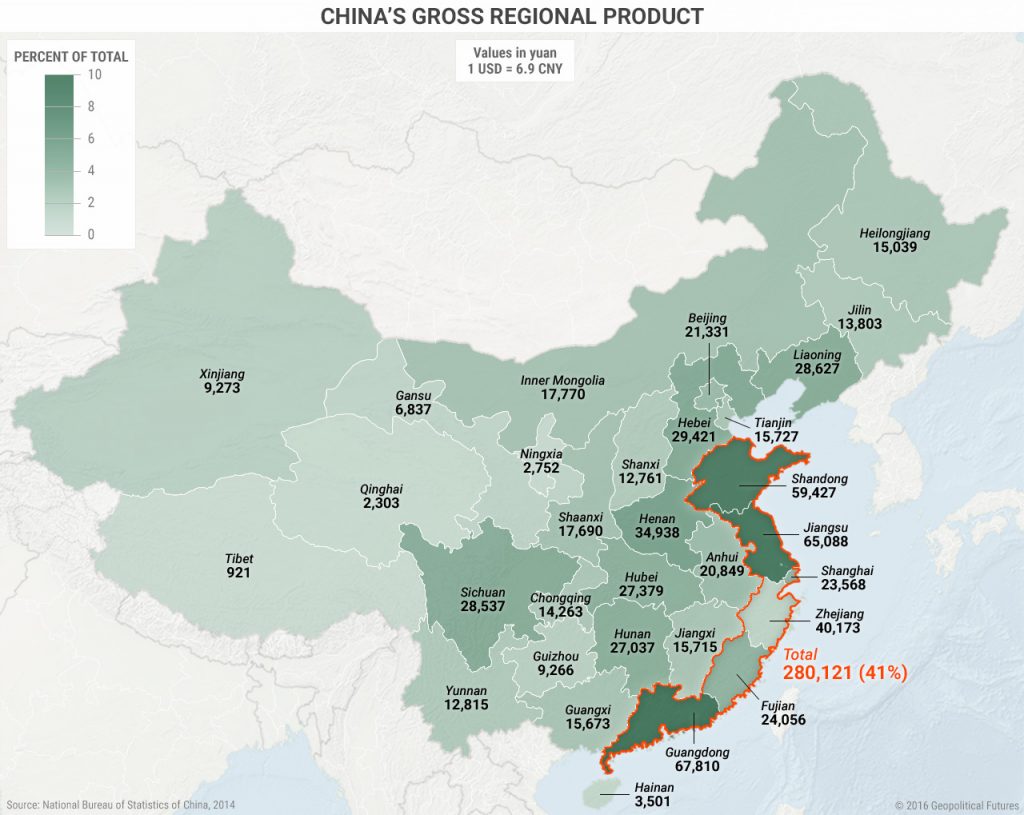 The map above is China’s gross regional product by province. It uses data from 2014, which was the latest data available at the time the graphic was made (2015 data was released a few weeks ago). The data’s source is the National Bureau of Statistics of China (NBS). The NBS is under the authority of China’s State Council and is the chief administrative authority of the People’s Republic of China (PRC). That sounds impressive, and it is. The statistics have the full weight and authority of China’s sovereignty behind them. China, however, is notoriously unreliable when it comes to the accuracy of its statistics. Sometimes, it is because China is an unwieldy country and statistics are extremely difficult to gather. Most of the time, it is because Chinese officials have an incentive to manipulate economic data to reach goals laid out by the central government. Good economic data in China leads to promotions; accuracy can get you fired, or stuck in a low bureaucratic rank.

On Jan.18, the People’s Daily, China’s largest and the Chinese Communist Party’s (CPC) official newspaper, published an article in which the governor of the northeastern province of Liaoning admitted at a meeting of the province’s People’s Congress that “some local fiscal and economic figures between 2011 and 2014 were falsified and fraudulent.” This is not an uncommon occurrence in China. We track the unreliability of Chinese statistics and noted last year when the then head of NBS was sacked in an anti-corruption investigation. But China is also an extremely difficult place to get information. Some parts of the Chinese interior are hard even for China to get accurate data from, let alone outsiders looking to analyze China’s geopolitical position.

That means that the graphic above may be both accurate and inaccurate. It is a fact that China’s National Bureau of Statistics reports provincial GDP at the levels shown in the graphic. But as to the accuracy of NBS’ figures, we can only say that they should be taken with a few grains of salt. We have chosen to use them because data in China is hard to come by, but we do so with full knowledge that the statistics’ accuracy is in question. They are statistics, not facts. Some may remark that perhaps China is trying to improve this state of affairs – why else would an influential CPC newspaper publish a story about the manipulation of data, and why would the government purge the NBS of those accepting bribes in order to fabricate data? Here, we can only guess as to intention. The PRC is integrated into, and dependent on, the world economy, so perhaps it leaks stories like these so that outsiders will view the officially sanctioned facts as more reliable. Whatever the case, we can say for sure that the PRC is an authoritarian system, and in dictatorships powerful people decide what the facts are, as opposed to democracies, where the people have that power.

Another example of this problem comes from one of our readers. Last week, we published a piece on why China will have a difficult time recruiting the Philippines as a potential ally. One of the facts marshaled in that piece was from a 2014 Pew Research Center study that said only 38 percent of Filipinos had favorable views of China, while 92 percent had favorable views of the United States. A reader wrote in to question the validity of the poll by pointing out that China was disadvantaged from the start because of American pop culture’s dominance in the Philippines as well as many Filipinos’ indignation at the relative wealth of the Chinese community in the Philippines. This study, according to the reader, was not good support for arguing that Philippine President Rodrigo Duterte is constrained in how much closer he can bring his country’s relationship to China. 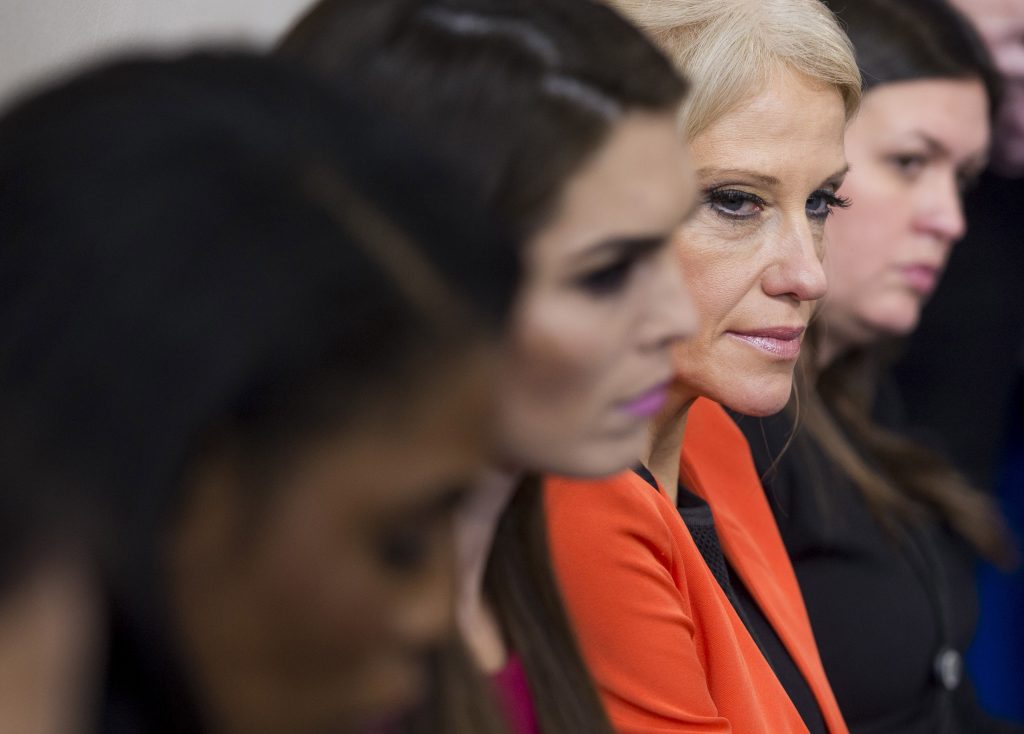 It has been a rough few years for pollsters, and if it weren’t obvious before, it is now: No poll should ever be taken as the gospel truth. Polls have inherent limitations, no matter how scrupulously or extensively they are carried out. Even if you could survey every member of a population, how do you determine if someone is lying to you? It isn’t possible. All we can say is that Pew is a highly reputable organization with an expressed mission to inform the public without taking policy positions. The poll in question was supervised by Princeton Survey Research Associates International, another independent company that does not work to further a political agenda and takes its methodology extremely seriously. All the information about the specific poll is provided at the end of the poll itself. For all these reasons, we made the determination that this polling data could be treated as evidence for the supposition that the majority of Filipinos hold a more favorable impression of the United States than of China, and that this constrains the level of territorial concessions Duterte could offer China to further a potential alliance.

This is where it is key to point out how important our geopolitical model of the world is to our work. We do not blindly scour the world for facts and then simply report the news. We have a model of how the world works, and the most important part of that model is our forecasts. Our forecasts are the sum of our collective analytical power: They describe what we think is going to happen in the year – and years – ahead. Based on everything we understand about China, for example, we forecast an increasing dictatorship in response to economic problems. We cannot prove that China grew at exactly 6.7 percent in 2016, as NBS announced last week. What we can say is that we do not trust that figure, that for a multitude of analytical reasons we suspect the growth rate is much lower, and that we must continue conducting intense research and fact-gathering to ascertain how the Chinese economy is doing. Our model is independently driven and is at the heart of our work. We challenge it constantly with new information. It also tells us what to write, and it can help determine what can be considered fact and what to view with skepticism.

It is a maxim of modern-day social science that objectivity is impossible. That’s true, but it doesn’t make objectivity any less important. As analysts, we make judgment calls about the validity, or lack thereof, of facts, and inherent in that judgment will be biases that sometimes we do not even perceive until someone points them out. We solve this by being rigorous in our method, transparent about our reasoning, and open to critique from our readers. For better or worse, we live in a world of “alternative facts.” This is not a new state of affairs. It has always been this way. We also live in a world with greater access to information than at any other point in human history. We consider it a solemn responsibility (and a decent job) to sort through that information to present the facts as we see them. We do not judge whether we are successful based on some kind of moral relativism that lends credence to all facts based on the beholder’s point of view. We judge whether we are successful based on whether our forecasts are right, and that’s about as close to objectivity as you can get.

*Editor’s Note: After we posted this story on Wednesday, the White House modified its statement to read: “In our nation’s capital, killings rose by 50 percent over the past four years [sic].”

For Iran, Nuclear Weapons Can Wait