Normally, it is China, not Russia, that acts as a negotiator with the North Koreans. But lately, Moscow appears to be stepping up its efforts to mediate talks with Pyongyang relating to its nuclear weapons program. These efforts, however, are unlikely to effect any real change since Russia lacks the means to persuade North Korea to change its course. They are, in reality, an attempt by the Kremlin to appear more influential than it actually is.

In a recent call with South Korea’s special envoy, Song Young-gil, Russian President Vladimir Putin said he would be willing to send a team to mediate talks between South and North Korea. Referencing the recent U.S. deployment of the Terminal High-Altitude Area Defense system, or THAAD, in South Korea, Putin said the North Korean nuclear issue can’t be solved through military conflict and instead must be approached from a diplomatic angle. Putin took the opportunity to challenge THAAD’s effectiveness, noting that North Korea possesses long-range artillery that the system can’t protect South Korea from.

But Moscow and Pyongyang seemed to be getting closer even before Putin made this offer. In late April, Russia’s ambassador to North Korea, Alexander Matsegora, and North Korea’s vice foreign minister of U.S. affairs, Han Song Ryol, met to discuss cooperation between the two countries. Although Russian media claimed that the ambassador urged restraint on Pyongyang’s part, North Korean state media claimed that the Russians “expressed understanding” for North Korea’s position. 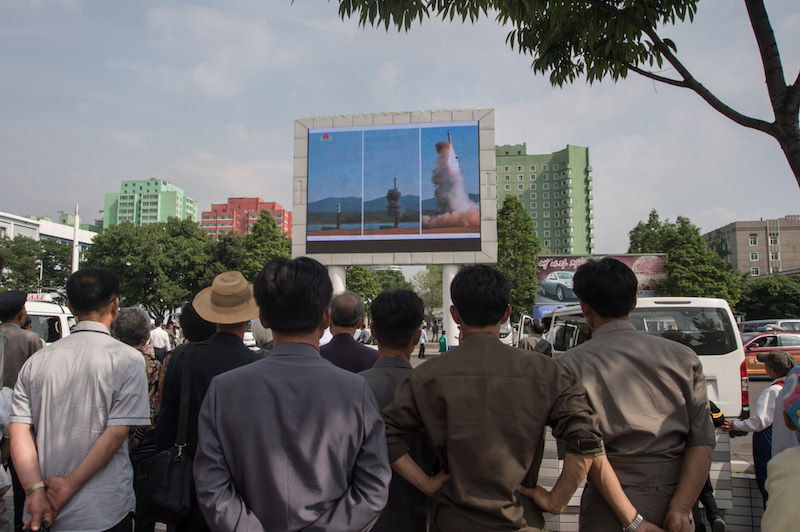 People watch a screen showing news coverage of the Pukguksong-2 missile rocket launch at a public square in central Pyongyang on May 22, 2017. KIM WON-JIN/AFP/Getty Images

There have also been moves to make travel between the two countries easier. In mid-May, a new ferry service between Vladivostok, Russia, and Rajin, North Korea, began operating. The two countries also agreed in March to increase the number of North Korean labor migrants in Russia, where approximately 50,000 North Korean workers already reside. By all appearances, Russia is beginning to take a more active role on the Korean Peninsula.

But just because Russia wants to play a greater role on the peninsula doesn’t mean it can. These recent Russian moves actually show how limited Moscow’s influence in North Korea really is. There’s not much Russia can do to actually influence North Korea’s behavior, so instead it volunteers to act as a mediator, which costs Russia nothing. And if its offer is accepted, it would at least raise the Kremlin’s profile in the region and make the high-risk situation more difficult for the U.S. to manage.

There are two ways Russia could really exert influence over North Korea. The first is through military force. But using military means to stop North Korea from developing a nuclear weapon is unrealistic for Russia since it’s already preoccupied with Ukraine and the Middle East. Russia, moreover, sits within range of many of North Korea’s ballistic missiles, and should Pyongyang actually develop the ability to attach a nuclear warhead to one of them, Russia would be exposed.

Russia, on the other hand, imports less than $6 million worth of goods from North Korea. Its exports to North Korea total roughly $80 million, which is still a very small amount. To exercise a credible economic threat, a state must first have a degree of leverage. Russia entirely lacks this pull over North Korea and therefore cannot credibly claim to have any substantial influence over its behavior.

North Korea is unlikely to respond to economic threats unless they would have a substantial impact on its economy. Take, for example, sanctions against North Korea’s largest trade product, coal briquettes, which account for nearly 35 percent of North Korea’s total exports. In November 2016, the United Nations imposed sanctions that limited North Korea’s aggregate coal exports to $400 million or 7.5 million tons. This move restricted the country’s trade with Beijing, since nearly all of North Korea’s coal is exported to China. Despite questions about China’s willingness to adhere to this sanction – out of fear that the economic impact on Kim Jong Un’s government could destabilize North Korea, which China wants to avoid – China appears to be complying with the sanctions so far. On April 7, China ordered a number of North Korean ships full of coal cargo sitting in Chinese ports to return to North Korea. Thomson Reuters Eikon, which tracks international ship movements, appeared to confirm that about a dozen North Korean ships full of coal subsequently returned to North Korea.

North Korea has lost roughly $550 million worth of export revenue because of these sanctions, 92 times the size of North Korea’s exports to Russia. But even this move has failed to stop North Korea from conducting more ballistic missile tests. Any economic pressure Russia could put on North Korea is unlikely to achieve a better result. Economically, Russia has little leverage over North Korea, and increasing the trade relationship to even a fraction of its current levels with China would take years.

What’s in It for Russia

Russia has good reason to want to appear influential in North Korea. If it could appear capable of managing Pyongyang, Russia would improve its negotiating position against the U.S. over issues like Ukraine and the Middle East. Negotiations are all about give and take, and appearing to have influence over North Korea would provide Russia with something to trade in exchange for U.S. concessions elsewhere. North Korea is a relatively low-risk area for Russia but a high-risk one for the U.S., so the U.S. couldn’t afford to completely ignore any interference by Russia. North Korea would have no problem with maintaining the perception that it’s close to Russia since it would give Pyongyang an additional partner to work with and increase its diplomatic maneuverability. Since the U.S. was hoping to have China’s help in resolving the North Korea issue, if Russia inserted itself into the mix it would further complicate that plan.

Russia also shares a small border with North Korea, roughly 11 miles (18 kilometers) long. Sending a mediation team creates the appearance – at little cost – that Moscow is being proactive in protecting Russia’s interests in its periphery. This plays well for Putin, who wants to appear to be a strong leader who protects Russia’s interests abroad despite the growing challenges at home.

But North Korea is not actually willing to sacrifice aspects of its nuclear program since it believes this would endanger its security interests, and therefore these attempts to play mediator and influence the Kim government are nothing more than a charade. Russia knows this, and the West knows Russia knows this, which means these recent diplomatic moves are little more than a low-cost gamble that, if they were to pay off, would give Russia only a slightly better position in negotiations elsewhere.