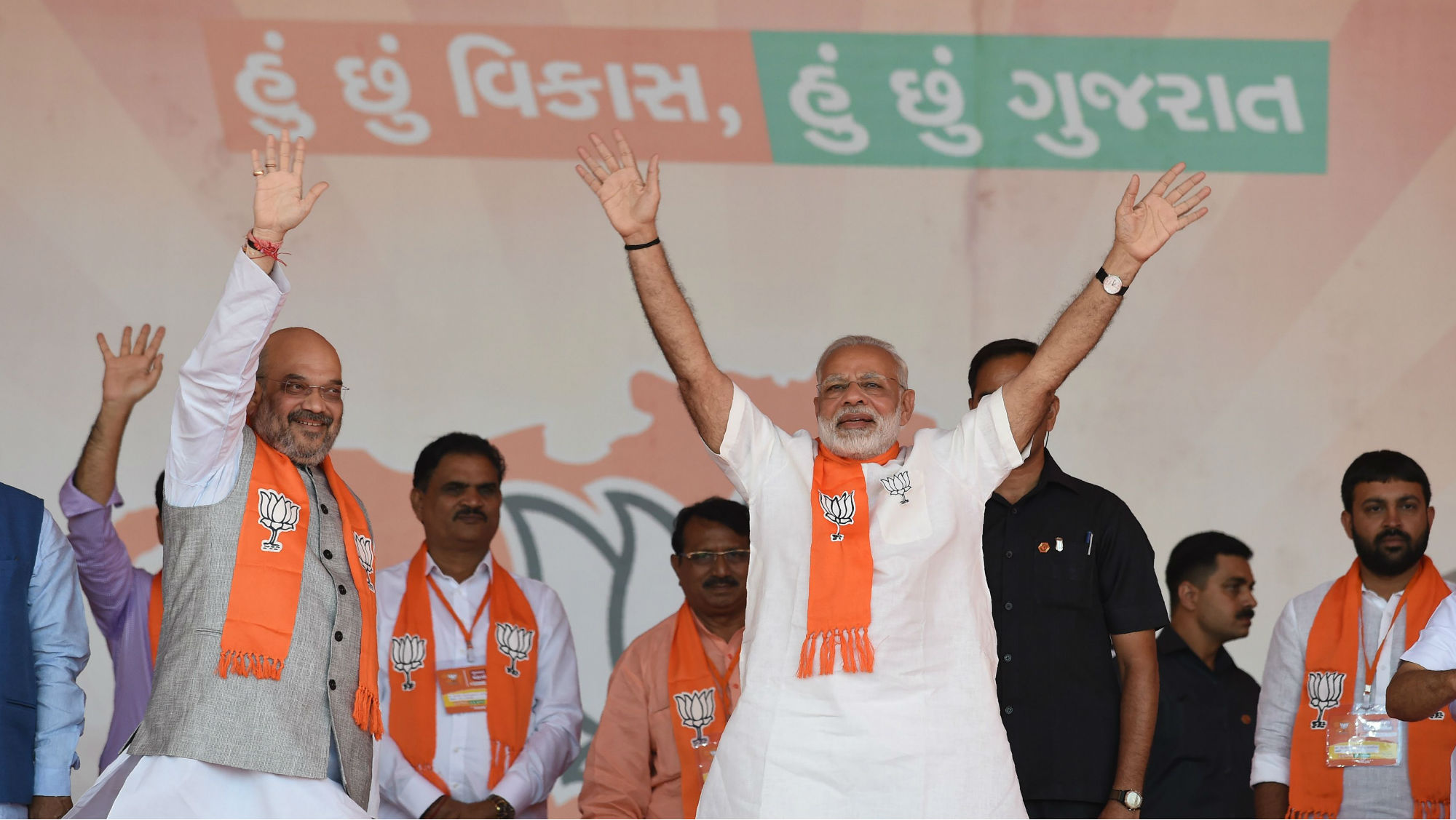 According to a Pew survey released this week, 88 percent of Indians hold a favorable view of Indian Prime Minister Narendra Modi, and 83 percent are satisfied with the state of the economy. Most notably, 70 percent said they were satisfied with the direction their country is moving in. Just 29 percent felt this way in 2013, which means there has been a seismic shift in public sentiment in India.

The increase in public confidence comes just three years after Modi was elected prime minister. During this time, his Bharatiya Janata Party has enjoyed multiple victories in state elections, and Modi has embarked on major reforms in several sectors. The prime minister’s revolutionary vision for India’s future bears little resemblance to its present. But when polls suggest that a strong majority of Indian society may have bought into that vision, it is time to stop and take stock. 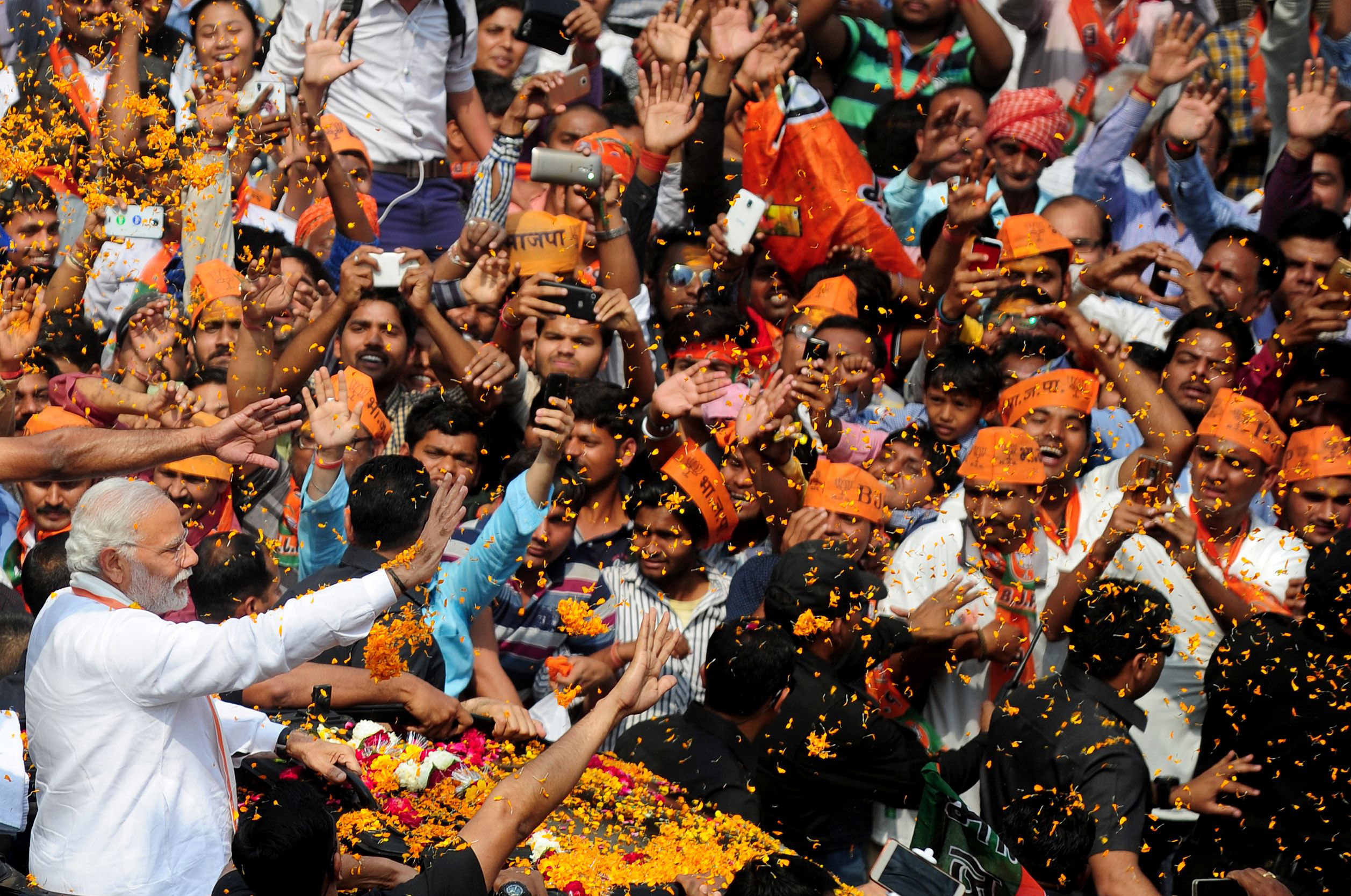 Modi’s vision for India can be boiled down to strengthening the country in three ways. The first is strengthening the central government. Modi wants to unify all of India around a set of policies and to enforce those policies in an equitable way, for the benefit of both Indian citizens and foreign investors. The second is strengthening India’s military. Modi wants India to be strong not only on the Indian subcontinent but also in what India has taken to calling the “Indo-Pacific” region. The third is strengthening Indian society. India is a vast collection of religions, ethnicities and languages. Modi doesn’t view this diversity as an advantage. He is a Hindu nationalist, and he wants India to be a nation-state with a uniquely Hindu identity. 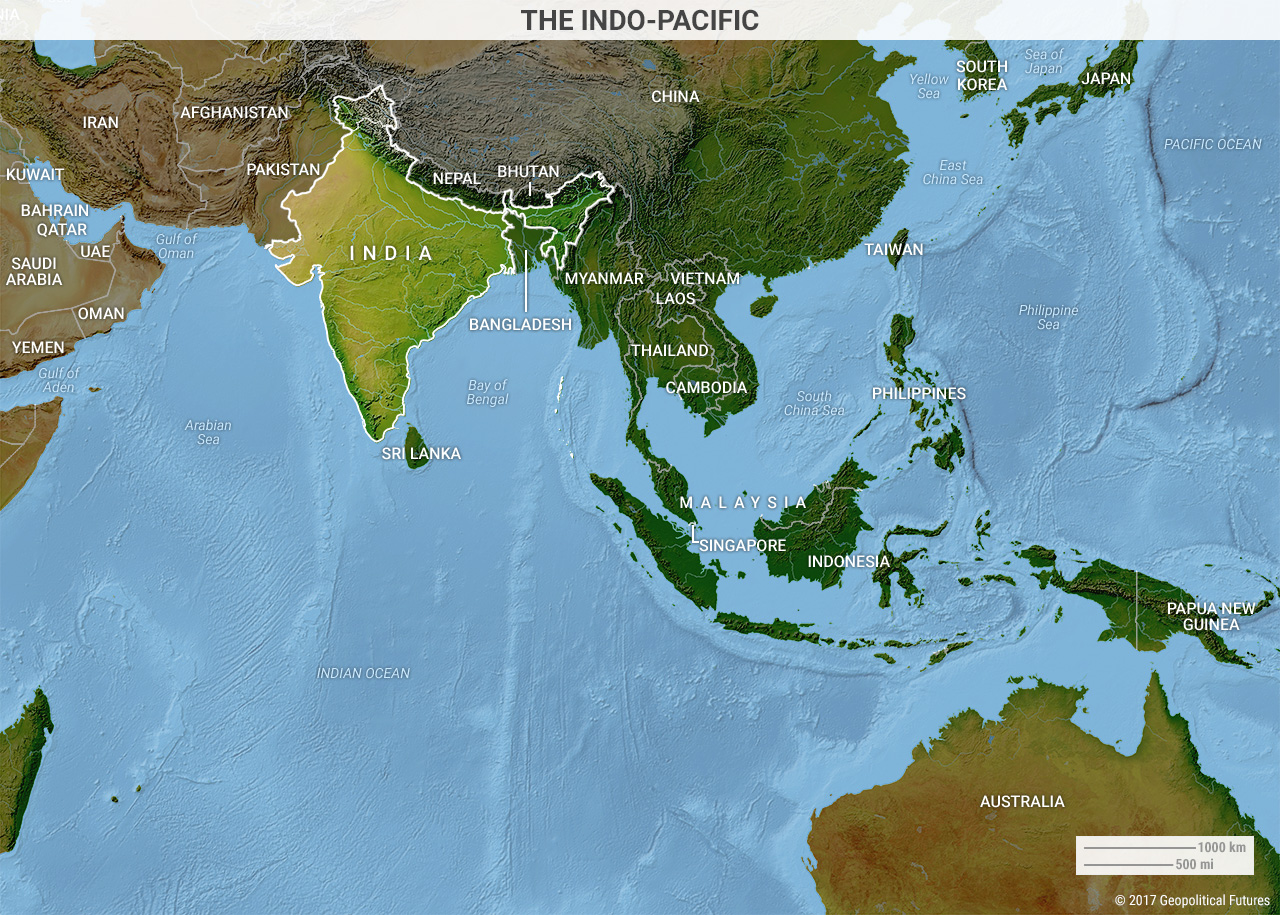 In terms of the first part of his vision, Modi has already taken some ambitious steps. A year ago, his government launched a controversial scheme to abruptly take 85 percent of India’s currency out of circulation to crack down on money circulating in the black market. In the short term, Modi’s demonetization plan created chaos at every level of Indian society. Long queues at bank machines and stories of cash shortages were abundant. And at the macro level, the economy took a hit: Gross domestic product growth in the first quarter of 2017, just after demonetization was implemented, was 5.7 percent, compared to 7.9 percent in the first quarter of the previous year.

But Modi’s demonetization scheme was ultimately a success in that it addressed the problems it was intended to address. Those who tried to hide wealth gained through illegal activities were forced to pay taxes or find alternate havens. And the BJP’s opponents in state elections could no longer use cash to buy votes, one of the many reasons the party rode to easy victories in key states like Uttar Pradesh, where the BJP defeated the incumbent party. Most important, Modi’s popularity remained sky-high.

Demonetization was not a flash in the pan. It was the beginning of a broader plan to strengthen the writ of the central government in India’s diverse and far-flung constituent states. On July 1, India introduced a Goods and Services Tax to unify the country into a single market. India has been contemplating tax reform for over a decade, but it took constitutional changes passed by Modi’s government in 2016 to make implementation possible. The GST replaced the convoluted and dizzying tax regime that existed before.

The government is now setting its sights on the gold and real estate sectors. The GST raised taxes on gold, and in August, the Indian government placed gold under the protection of the Prevention of Money Laundering Act, making it harder for individuals to use gold to evade taxes. Reports suggest more regulations on the gold trade are coming. The government initiated reforms to the real estate sector last year, when it passed a law giving itself broad powers to prosecute individuals who own what are known as “benami” properties – real estate purchased under someone else’s name, also to evade taxes. In August, Modi claimed that demonetization had helped unearth more than 300,000 shell companies – which are often used in benami transactions. Earlier this month, India’s Central Board of Direct Taxes announced investigations into all properties valued above roughly $46,000.

The government has also reformed bankruptcy laws. In May 2016, it passed a national bankruptcy law aimed at streamlining the process and shortening proceedings that, according to the World Bank, used to take over four years on average to resolve. (The new law is intended to conclude proceedings in 180 days, with the possibility of a 90-day extension in exceptional circumstances.) These new laws were tested earlier this year by an Indian company called Innoventive Industries. Innoventive tried to delay bankruptcy proceedings and avoid paying its creditors by invoking state laws and appealed its case all the way to the Supreme Court. The Supreme Court dismissed the appeal and stated that this case represented a “paradigm shift in the law.” The government’s handling of another Indian company, Reliance Communications, which defaulted on U.S. dollar bonds earlier this week, will be another litmus test for India’s new bankruptcy laws and will determine whether they can be utilized by foreign creditors.

With regard to strengthening the country’s military, India has also been flexing its muscles more in the past two years. Last year, Indian ships participated in military exercises with the Japanese and U.S. navies in the Philippine Sea. Those exercises were a sign of things to come for India’s foreign policy. In October, the Indian navy announced it planned to deploy ships to the Indian Ocean permanently. Earlier this month, Modi traveled to the Philippines for the Association of Southeast Asian Nations summit, but he also found time to sign a defense cooperation agreement with the Philippines after a meeting with mercurial Philippine President Rodrigo Duterte. The Philippines has become a key locus of competition between China and the United States, with China hoping to pull the Philippines away from U.S. influence. India’s objective here is to make sure the Philippines does not improve relations with China in a way that changes the balance of power in the Indo-Pacific.

During Modi’s trip, India, Australia, Japan and the United States resurrected the Quadrilateral Security Dialogue, a defense cooperation initiative between the four countries that was established in 2007. The central goal of the initiative is to counter China’s influence in the region. This is a big step for India. It’s no longer content to just conduct exercises in China’s backyard. It wants to be part of a major alliance to limit China’s powers in the Pacific. In the past, India and China have had minor border spats in places like Doklam and have competed for political influence in places like Nepal. But projecting Indian naval power in China’s sphere of influence is an escalation and a sign that India wants to be a player beyond the subcontinent. 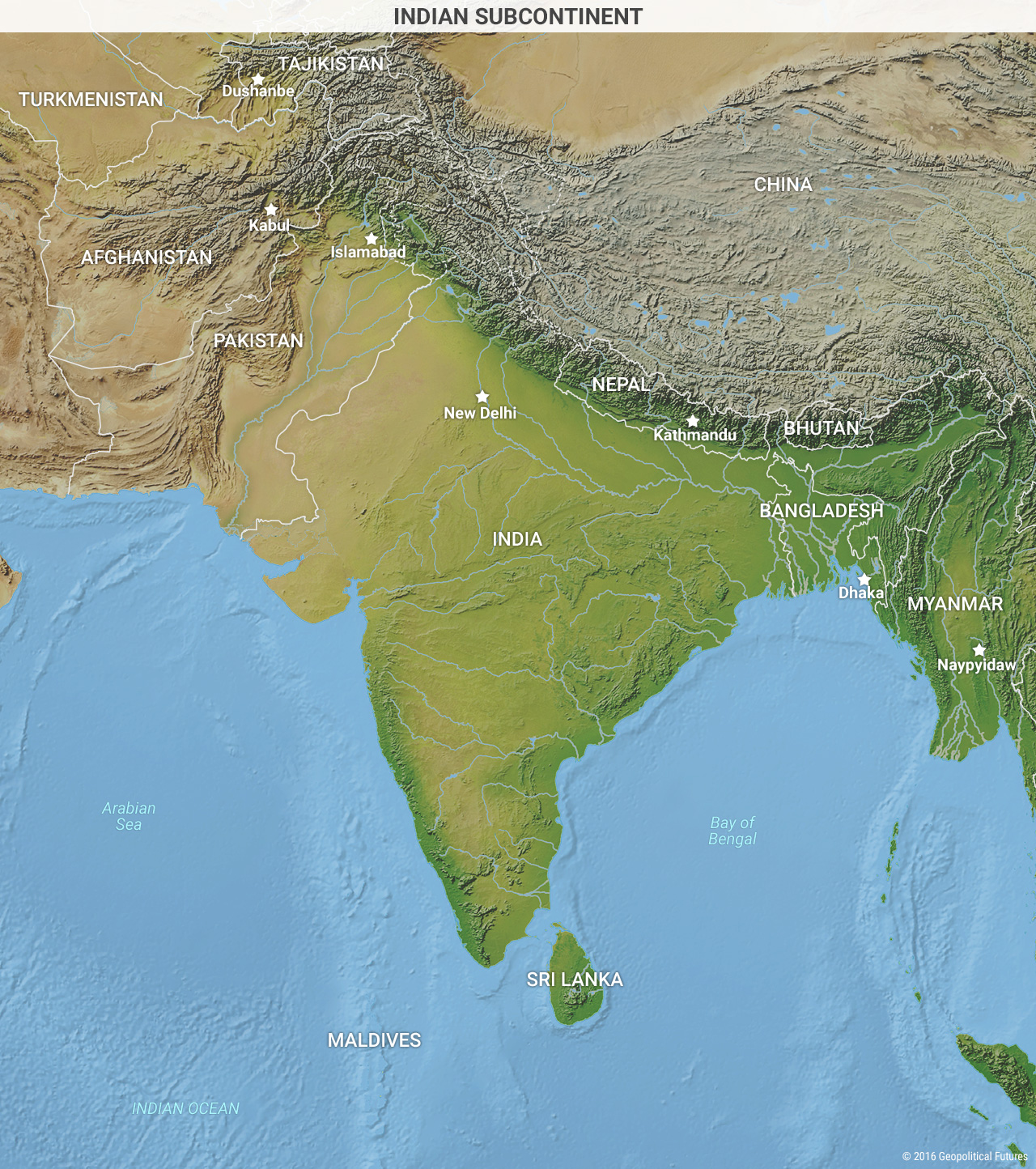 The third main aspect of Modi’s vision for India’s future is in many ways the most daunting. India cannot achieve any of the changes mentioned above if it is at war with itself, and Modi’s Hindu nationalism has already created significant strife within the country. According to the Center for the Study of Society and Secularism, violence against Muslims, Christians, Sikhs and other religious minorities has increased in the past five years. And while this type of violence is not exceptional in Indian history, this is the first time it has erupted while a strong Indian government dominated by Hindu nationalist ideology is in charge.

The official guiding philosophy of Modi’s BJP is “integral humanism,” which has been interpreted in various ways since it was first articulated in 1965. For some in the BJP, integral humanism is about defining Indian culture as separate from Western culture, and therefore leaves space for multiple religions to be accepted as authentically Indian. But for others, Modi most notable among them, the BJP’s ideology is inextricably tied to Hindu nationalism. From this perspective, being Indian means being Hindu. But this definition obviously excludes other religions. Modi’s position is similar to a number of nationalist movements in other countries whose popularity has increased in recent years. The problem, however, is that the diversity of Indian society is orders of magnitude greater than that of countries like Spain, for example, or even China. 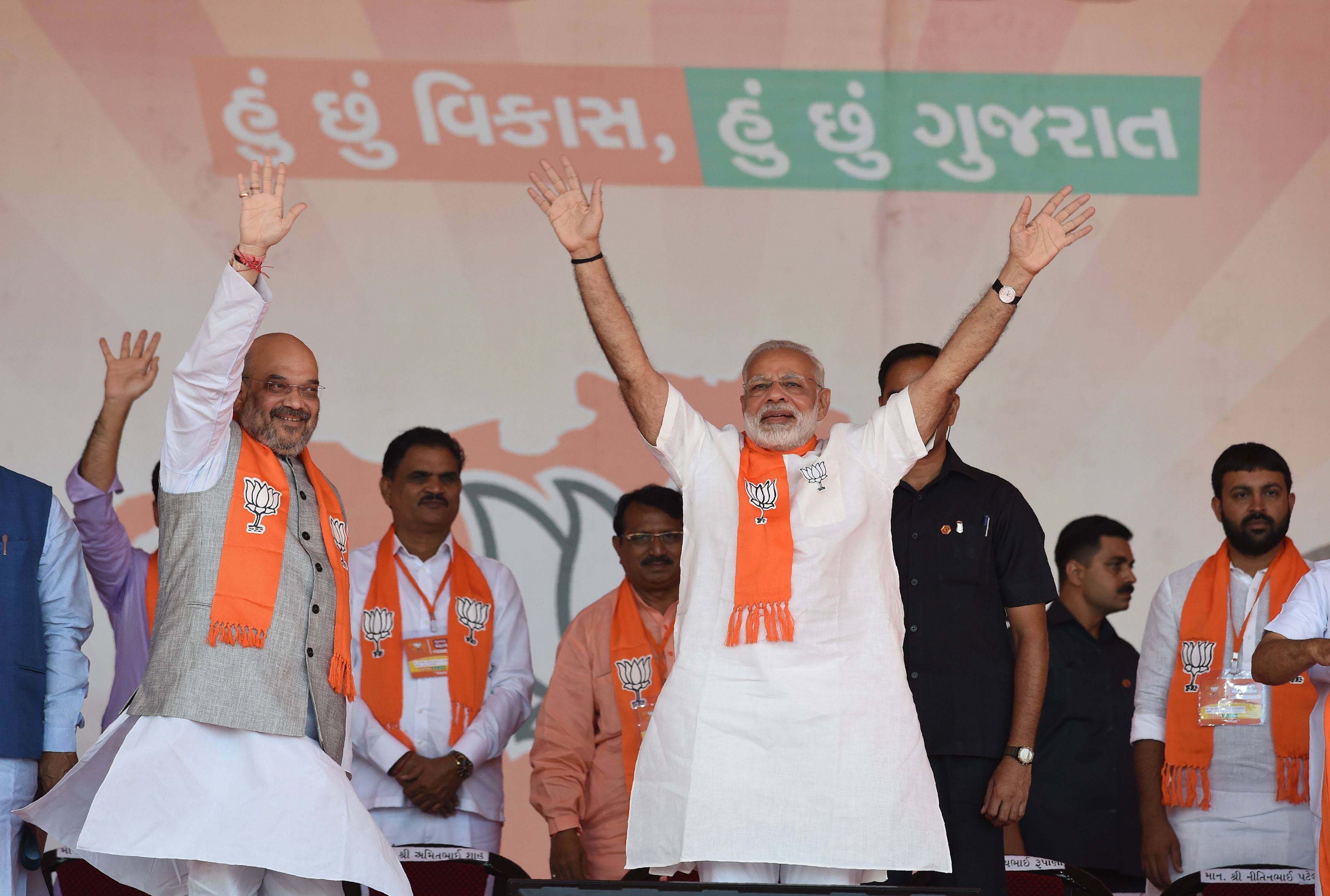 Which is why the Pew survey is so arresting. It would be one thing if a large majority of Indians were simply happy with Modi’s economic policies and more assertive foreign policy. But the survey says most Indians are satisfied with the direction in which Modi is taking the country. If (and it’s a big if) the survey results mean the vast majority of Indians support Modi’s articulation of Hindu nationalism, then maybe a new Indian identity is emerging at the local level. Perhaps Modi is not driving India toward a more Hindu nationalist direction – perhaps India is becoming more Hindu nationalist, and Modi’s election and subsequent successes are an expression of that identity taking root. If an Indian government, whether led by Modi or someone else, finds itself in charge of a unified India, it would be able to marshal India’s vast resources more efficiently than ever before. Then, India would no longer be the poor, decentralized, inefficient country it is today. With a unifying identity, India could become a powerhouse whose rise could have massive consequences for the balance of power not just in the Indo-Pacific but around the world.

In geopolitics, sometimes the most important things to grasp are intangible. This is one reason geopolitics is so complicated; people prefer to put their faith in facts that can be measured instead of truths that can’t be. For instance, India is the second-largest country in the world by population and will soon be the largest. It has the seventh-largest GDP, and even with its economic challenges, it is growing rapidly. It has a huge and well-educated labor force, and English is spoken throughout the country. It has easily defensible geography, and its only true enemy – Pakistan – is weaker than India and can be managed.

But statistics will not define India’s future. It will revolve around a question whose answer can’t be summed up by facts and figures. That question is: Can India become a unified country, or is it destined to remain an unruly union of different peoples whose first loyalty is not to New Delhi, but to their own region, state, tribe or God? The latter is the more likely scenario; Modi represents an ephemeral phase of consolidation, but the country will return to its fractious reality. But there is enough evidence mounting to stop and consider what the less likely scenario might look like. It is one in which India is very strong, indeed.

FOX News – Turkey’s relationship with the West crumbles amid new...