In mid-June, a remote area called the Dolam plateau in the Himalayas where the boundaries of China, India and Bhutan meet made headlines when Indian and Chinese troops began a standoff over a road construction project. China conducted a live-fire exercise in the area, and there have been false reports of deaths. Diplomatic efforts are underway to de-escalate the situation, but still the risk of war has been on everyone’s mind.

The terrain and weather in the area, located in a region called Doklam, are anathema to war. And yet, almost exactly 55 years ago, China and India fought briefly over this and other contested border areas. So what is the strategic value of this seemingly obscure plateau? And would India and China really go to war again over it?

Put two major powers next to each other, even on the world’s largest continent with buffer states between them, and they’re bound to bump heads from time to time. China and India have most often fought over Kashmir and Arunachal Pradesh state, which borders China in an isolated patch of Indian territory east of what’s known as the Siliguri Corridor. The corridor is a narrow strip of land – just 17 miles (27 kilometers) wide at its narrowest point – that connects the rest of India to its northeastern states wedged between Bhutan, Bangladesh, Myanmar and China. 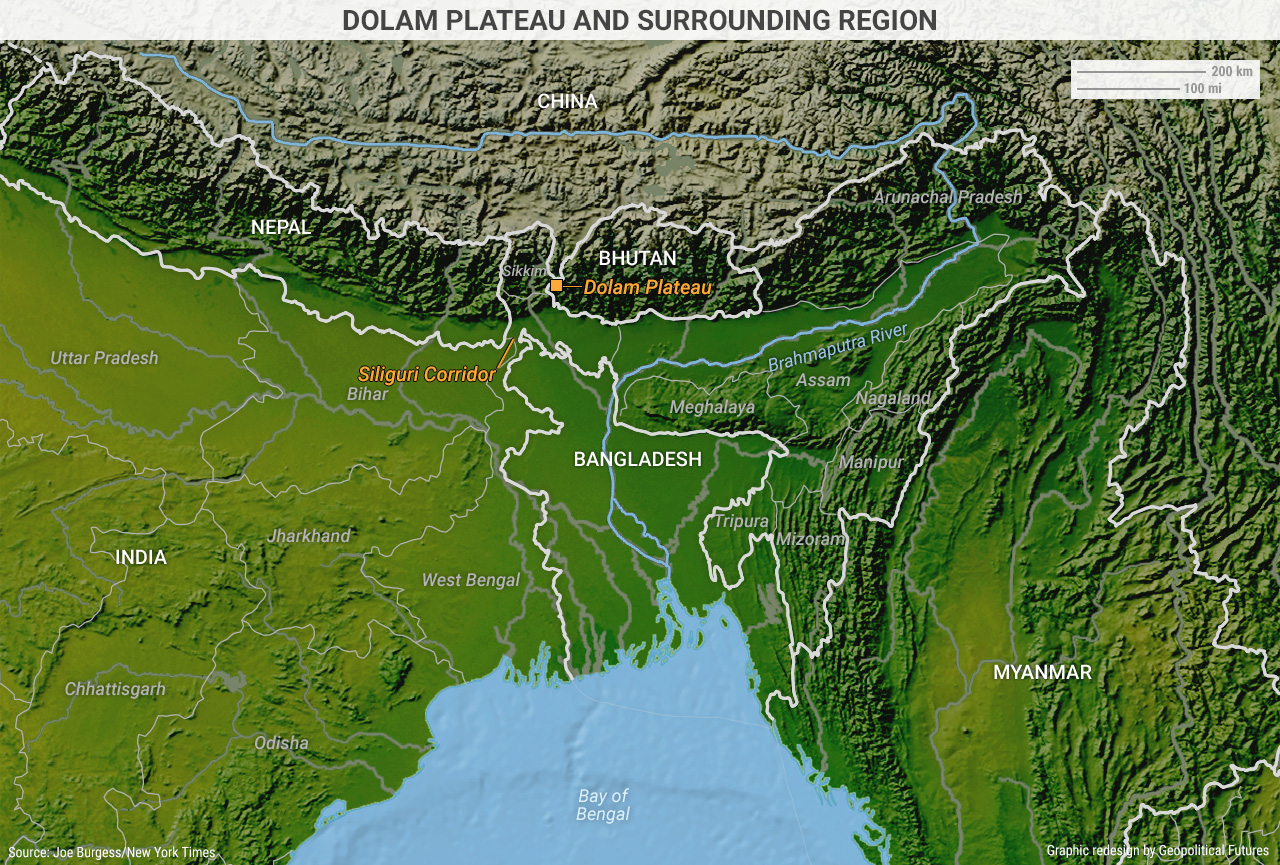 After the 1962 war between India and China – a war also over border disputes, specifically Arunachal Pradesh and Kashmir – a border known as the McMahon Line was drawn between China and Arunachal Pradesh. China withdrew its troops from the area, but it didn’t recognize India’s sovereignty over the territory. India eventually annexed the Kingdom of Sikkim, which expanded the buffer it had to defend the Siliguri Corridor, and assumed the role of protecting Bhutan.

On the surface, the origins of this latest standoff seem innocuous. It began with China’s construction of a road on the outskirts of China’s western territory. The road leads toward the Chumbi Valley, which lies in the tri-border area between China, India and Bhutan. This small area dips between the other two countries. 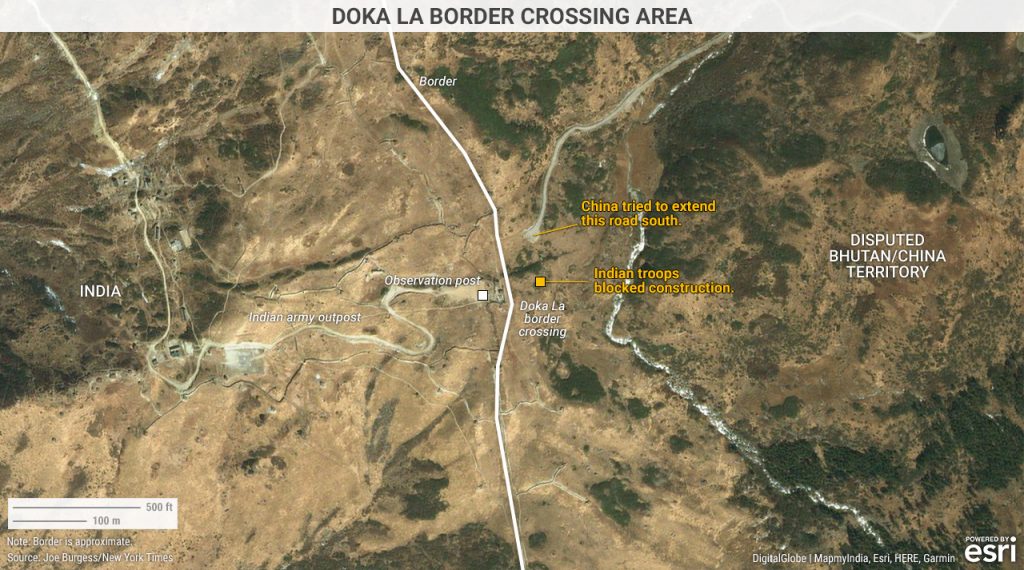 As construction progressed, China tried to extend work into the Dolam plateau, which is claimed by Bhutan. India recognizes Bhutan’s claim; China does not. India and China each have over a billion people; Bhutan is smaller than the Dominican Republic and has a population of less than a million. Since it can’t stand up to its massive neighbors, Bhutan depends on India for defense. Rather than allow the road construction to continue, India sent troops to barricade the project. China sent a small number of its own troops in response, and the standoff commenced.

What makes this obscure plateau so important is its relationship to the surrounding landscape. The Dolam plateau overlooks the Chumbi Valley and would be arguably the most strategic staging area from which to defend – or attack – the Siliguri Corridor. To maintain its territorial integrity, India must control the corridor and meet any challenge to that control. For this reason, the government in New Delhi cannot tolerate the slightest Chinese presence, nor can it allow China access to Dolam – not even in the form of a road.

If China were to gain control of the Siliguri Corridor, it could cut India off from its northeastern states and stake its own claim to the territory. And this isn’t just some trivial collection of states: They host the upper half of the Brahmaputra River, which flows through Bangladesh and drains into the Indian Ocean. Whoever controls this river controls the freshwater supply and flow to Bangladesh. Assuming dominance over the Brahmaputra River would put China just a few steps from accessing the Indian Ocean via Bangladesh – by coercion, if necessary. Access to the Indian Ocean is a Chinese imperative because it would enable Beijing to bypass the many maritime chokepoints in the South China Sea and would make it much harder for the U.S. Navy to hem China in.

This is all hypothetical, of course, and won’t happen anytime soon. But conceptually it follows China’s strategy for Myanmar, where Beijing is attempting to secure access to the Indian Ocean through a series of soft power maneuvers. Like Myanmar, Bangladesh is much smaller than China. The situations aren’t perfectly analogous, however, because to influence Bangladesh, China must first conquer territory under the control of a near peer – India.

Nevertheless, this explains how China’s interest and actions in Doklam fit into its larger geopolitical imperative of reaching the Indian Ocean. Imperatives, by their nature, are always present. They don’t disappear just because a country can’t fulfill them in the present. Gaining geopolitical power requires understanding both the short and the long game.

The decision to wage war is never taken lightly. Aside from the moral components, a great deal of thought must go into analyzing the strategic value of the war, the logistics, and the cost and benefit. In other words, saying there is a potential for war because a few hundred troops are in a standoff is an oversimplification of what war would actually entail.

The first step is to understand the tactical dimensions of the situation. Reports on this standoff are imprecise – information about Indian troops has been circulated more freely than about Chinese troops in the area. At the construction site on the plateau there are believed to be about 300-400 soldiers from each side. Under normal circumstances, India maintains about 120-150 troops in the area. Estimates from early July of troop numbers in the general vicinity of Doklam were 3,000 for both sides, putting real troop levels at a little over 6,000.

Nearby in Sikkim state (the Indian state bordering Bhutan and China), India has a few thousand more troops. The 63rd Brigade in eastern Sikkim and the 112th Brigade in the north consist of about 3,000 men each. Reports also say that two battalions from the 164th Brigade have been activated and moved closer to the Chinese border. Whether these troops are counted in the estimates of Indian troop numbers stationed in the Doklam area is unclear. India also boasts three infantry mountain warfare divisions consisting of about 10,000 troops each that are on high operational readiness. Information on what types of weaponry the Indian soldiers around Doklam have is minimal.

Troop numbers on the Chinese side are much more ambiguous. The only publicized figure has been the 3,000-troop estimate. In late July, the Chinese defense minister said there were plans to strengthen the People’s Liberation Army’s deployment and increase exercises along the border, but he offered no specifics on troop numbers or timelines. What little we do know concerns the weaponry that China has in the area and comes as a result of a one-day live-fire exercise the PLA held in Tibet in mid-July. These drills included anti-tank grenades, missiles, small artillery (howitzers) and, according to rumors, a new Chinese-designed light tank. There have been no reports of aircraft or heavy artillery or vehicles in Doklam on either side.

Warfare in an area such as Doklam would ultimately require ground troops in order to capture and hold territory. Supply chain logistics and the ability to sustain troop levels then become critical not only for sustaining the fighting but also to maintain control over territory once the fighting ends. Whether this can be done depends heavily on terrain, logistics and weather. In a place like Doklam, the environmental factors make it extremely difficult and costly to wage any type of war.

Reaching altitudes as high as 14,000 feet, the region is surrounded by mountains. Even the lowest points of the valley are at an altitude of nearly 10,000 feet. This puts tremendous physical stress on soldiers. Any troops deploying would need 8-9 days to make their way up to the full elevation and get acclimated. Fatigue and other ailments related to the altitude would be much more likely than they would on a low-level plain.

The climate is generally inhospitable. During the summer, the temperatures peak in the 50s and 60s Fahrenheit (10-15 Celsius). Now is also the rainy season. During the winter, temperatures can easily drop below zero. There are few fixed facilities and accommodations for either military. On the Indian side, established facilities can hold only 150-200 people. Additional troops would need to use makeshift facilities and tents for shelter from the elements. Maintaining the health of troops in such intense conditions is challenging, and the risk is high of health problems that could reduce a soldier’s ability to fight. 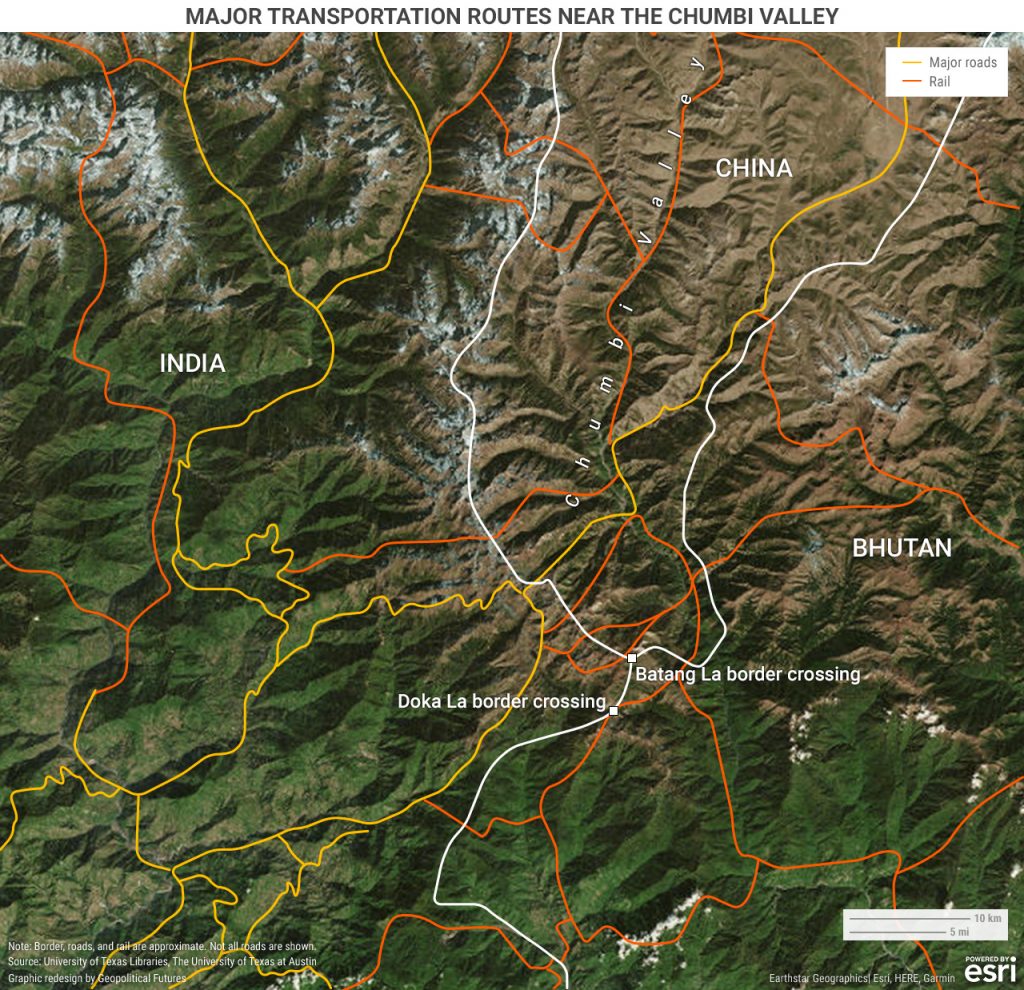 Finally, there is the question of logistics. There are few roads in the area that lead to Doklam. Most of the roads are unpaved, and those that are paved are small or have few lanes. Anecdotes from people who have worked in the area suggest that in many cases it is easier to move through the region on foot – especially in the areas with small dirt roads – rather than deal with the complications of vehicular travel. During the rainy season, the integrity of the dirt roads cannot be guaranteed. Massive mud deposits or flooding can severely impede travel. Under these conditions, it would be a logistical nightmare to run supplies and maintain troops fighting in Doklam.

This standoff is not about to lead China and India to war in Doklam. Though both sides have strategic interests in the region, the costs of warfare would outweigh the potential gains. Regardless of which side won, the simple participation in such a war would be very costly in terms of finances, supplies, logistics and troops.

Any territory gained would be strategically valuable, but neither country is in a position to capitalize on it. In India, Prime Minister Narendra Modi is still trying to centralize government control and sustain the economy. A military conflict could compromise the progress he has made so far.

China has its own list of challenges that need to be resolved. Its impressive growth numbers paper over the gaping holes in its economy. Moreover, relations with the U.S. are tense, and there’s still the potential for military conflict on the Korean Peninsula. These issues are far more immediate and important than Doklam.

The area matters greatly to both countries, but not enough to outweigh the other issues they’re facing, and not enough to justify the costs of war.