U.S. Navy officials announced on March 3 that a U.S. aircraft carrier group arrived in the South China Sea on March 1. However, more important was the U.S. military’s announcement also on March 3 that the United States, India and Japan will hold naval exercises in the Philippine Sea, northeast of the Philippines, in 2016. In many ways, the alliance emerging between these three countries is more significant than the presence of a new carrier group.

The naval exercises are not in the South China Sea, where there have been tensions, but it is near enough to draw China’s attention without crossing a Chinese red line. The Chinese Foreign Ministry gave a mild response to the announcement: “We hope the cooperation of relevant countries will benefit regional peace and security and not harm the interests of third parties.” This means that China has no basis for condemning these exercises since they are outside the area in which China claims an interest, but also implies that they better not be targeted at China because that would quickly change Beijing’s attitude.

U.S.-Indian and U.S.-Japanese exercises are nothing new, but tripartite naval exercises have not taken place for quite a while. There was an exercise in the Bay of Bengal last year, but this is the first time the three have held exercises near the South China Sea. There are two elements we need to consider. The first is the kind of exercises that can be carried out in those waters. The second is India’s willingness to not only hold exercises with the U.S. and Japan, but to conduct those exercises in a place that is bound to make China unhappy.

The South China Sea is an enclosed body of water. An archipelago of islands from the Strait of Malacca to the Philippines creates an enclosure with only narrow passages to the Pacific and Indian oceans. China depends on maritime trade, much of which passes through the South China Sea. China’s dread is that it might face a blockade of the passages through the archipelago. A blockade, which the U.S. could readily impose, would be economically disastrous for China. This is not a likely scenario at the moment, but China must assume it is a possibility – a possibility of low likelihood, but massive impact. 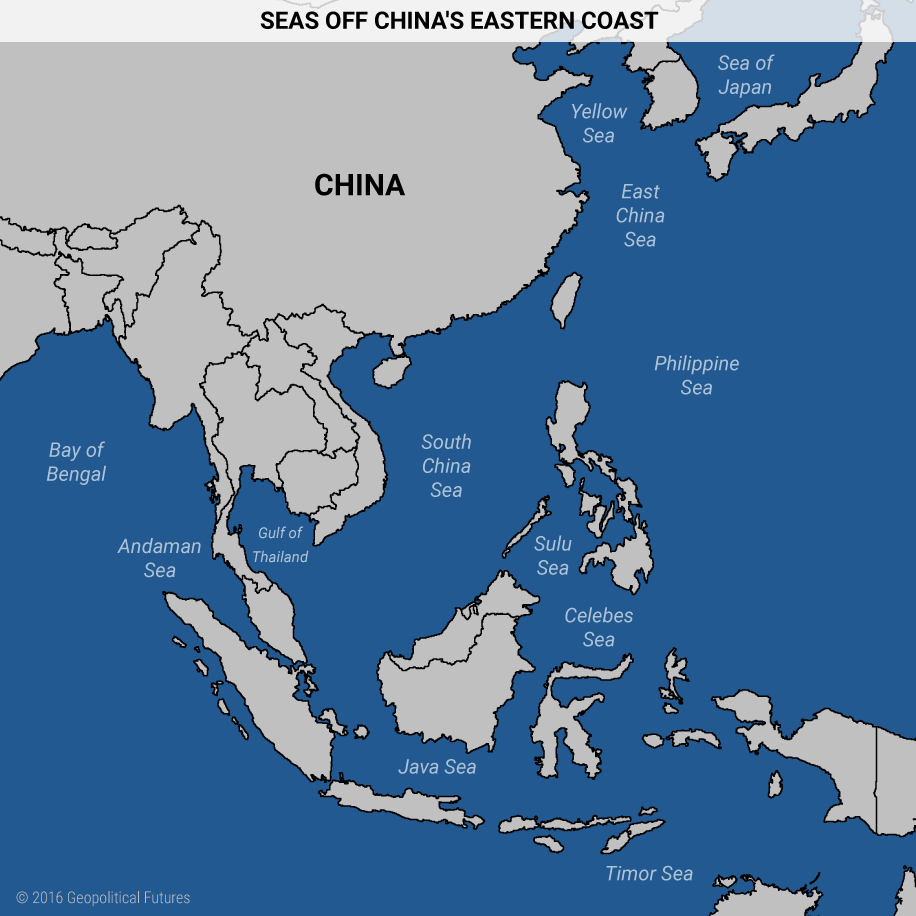 There is one major gap in the archipelago between the Philippines and Taiwan. That gap is wide enough that it would require a major force to seal off, and it is the place where the Chinese could theoretically make a fight of it using land-based anti-ship missiles, submarines and aircraft. There is room for maneuver there, and the Chinese need that room to even think of breaking out.

And naturally, in such a scenario, that is where the maneuvers will take place. It would be one of the places a main battle would be fought. It would not be fought in the South China Sea, within range of Chinese aircraft and missiles, but at a distance, because sealing off the South China Sea is achieved along the periphery. Anti-Chinese naval forces would fight from the east. And the most likely place the Chinese would try to break out is in the Philippine Sea.

The maneuvers there are mostly for show. But India and Japan have substantial navies, and they would provide additional strength to any U.S. interdiction force, which would be welcomed, as the U.S. Navy would be spread thin trying to hold all the choke points. There would be a political benefit of Japanese and Indian participation. But this particular exercise is not merely a gesture. It has some reality behind it.

The interesting thing is that India has chosen to participate in this. There has been much talk of a Chinese-Indian rivalry. It has been mostly nonsense. China and India live on different planets. China’s planet is north of the Himalayas, India’s to the south. Neither can make war on the other because the Himalayas are impassable for substantial military forces. You can have skirmishes there but not a significant war.

The Chinese and Indians are kind of rivals economically, but not really. Their economies are sufficiently different that it is not a zero sum game between them. China gives aid to Pakistan and supports pro-Chinese elements in Nepal, which bothers India. And India supports Tibetans. That said, they won’t go to war over these issues, so the rivalry is much overblown. They have no issues to fight over and couldn’t fight even if they wanted to.

But going fishing in the Philippines-Taiwan gap will annoy the Chinese. The Indians know this, yet they are going to do it. One reason may have nothing to do with China. A few years ago, U.S.-Indian relations deteriorated. Russia and India have historically been allies, and the strengthening of Russia gave India an alternative to the United States, with whom India has never been fully comfortable.

Russia looks very different than it did a few years ago, and what appeared to be a viable alternative to the U.S. is now more of a long shot. If India wants to cement relations with the United States, it is not enough to simply let Indo-Russian relations deteriorate. They have to do something the Americans would like. And since India is not sending troops to fight the Islamic State, the next best thing is to join the U.S. in maneuvers in the Philippine Sea. A good part of this is signaling cooperation with the U.S. without any real commitment. The even better part is that this move allows India to warn China that its occasional presence in the Indian Ocean will be resisted. As with many of these gestures, it is not all that impressive. A couple of ships east of Singapore says nothing about what will happen west of Singapore. But as far as signals go, this is not as meaningless as most.

Another reason India might want to participate in these exercises is that China is weakening. India is not. The weakening of the Chinese economy, which seems now unstoppable, will inevitably have an impact on Chinese military capabilities. And when it does, India may well be interested in seeking opportunity in formally Chinese regions. For that, India will need both American and Japanese acquiescence.

Japan is still the major power in East Asia. It is the third largest economy in the world, and it does not have hundreds of millions of impoverished people to cope with, nor impending waves of unemployment. Japan has an interest in containing China within its basins, but it also is going to emerge as the dominant power in Asia, as China declines. If India wants to be a part of that, assuming it can sustain its economic position, it will need to work with Japan. India’s internal divisions, poverty and population level (which will soon exceed China’s) prevent the Indians from playing major league geopolitics on their own.

Therefore, this particular exercise, unlike most others, is fraught with significance. It might signal a geopolitical evolution. I cannot stop thinking about where they chose to stage it. And I suspect neither can the Chinese. Call this a post-China exercise in the full sense of the term. Post-Russia too, for that matter.