The concept of martyrdom is a key driver sustaining the ideology of jihadism, but more importantly, it is a bona fide Islamic notion that shapes the behavior of the armed forces of most Muslim states. Martyrdom (along with many other associated ideas) is thus a contested concept. Muslim states have the challenge of significantly rolling back this contested nature, which is the prerequisite to delivering a decisive blow to the Islamic State and the wider jihadist movement. Given the lack of a consensus among the opponents of the jihadists, the problem is unlikely to be resolved in the foreseeable future.

In a paper he delivered to the Aristotelian Society in London in 1956, renowned Scottish political philosopher Walter Bryce Gallie introduced the term “essentially contested concept.” Gallie explained how a single concept is interpreted or applied by different groups in different ways. He showed how competing actors each claim to be the true upholders of a particular idea. While Gallie had the dispute over democracy in the context of the Cold War in mind, there is no shortage of such notions.

One such contested concept is the Islamic idea of martyrdom (“istishhad” in Arabic). According to classical understandings of Islam, a Muslim who dies while trying to fulfill a religious directive is a martyr (“shaheed”). While there are many types of martyrs, historically the ones most glorified are those who laid down their lives while participating in military combat. Muslims believe that the Almighty has promised to forgive all of the sins of martyr, who would be granted the best of places in the Hereafter.

In the medieval era this concept was inculcated in the military culture of the various Muslim dominions to further their geopolitical imperatives. This practice has more or less continued into the modern day. The armed forces of most Muslim-majority states today have institutionalized this concept as part of their ethos. This is true of nations that refer to themselves as Islamic and those that claim to be secular; the emphasis varies from country to country. 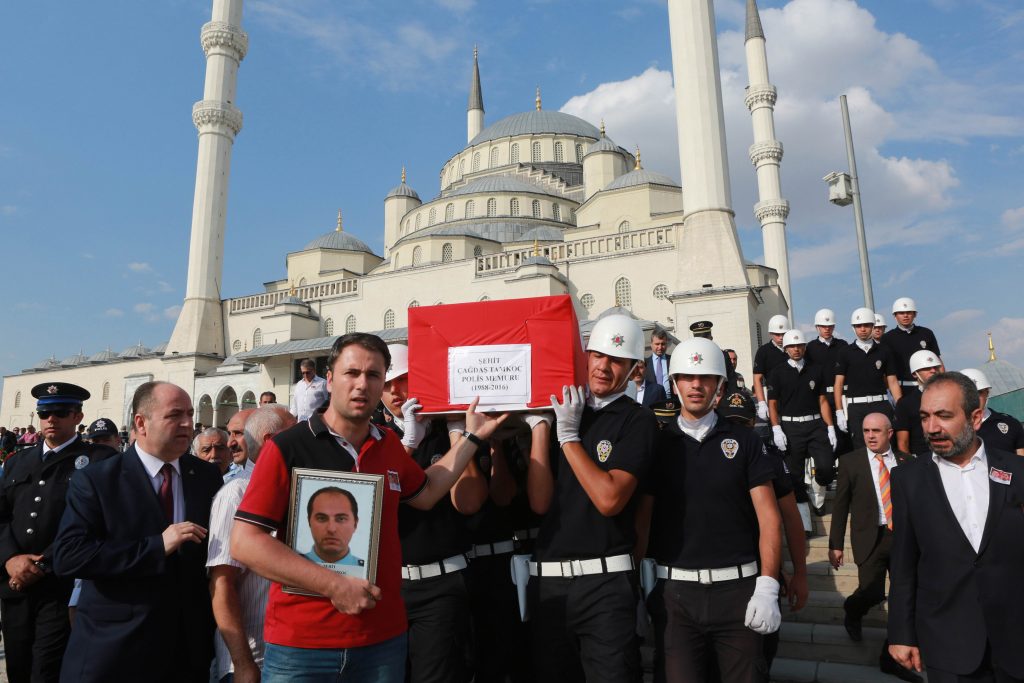 A Turkish honor guard carries the coffin of a policeman killed during the failed July 15 coup attempt, at Kocatepe mosque in Ankara, on July 20, 2016. ADEM ALTAN/AFP/Getty Images

The concept of martyrdom is straightforward in the context of conflicts between Muslims and non-Muslim entities – the Muslim side glorifies its slain troops as martyrs. However, martyrdom quickly becomes a contested concept when the belligerents both happen to be Muslim. Since the earliest days of Islam, rival Muslim polities waging war against one another have claimed their fallen soldiers as having embraced martyrdom. This contestation of martyrdom is linked to the dispute over which one was the true defender of the faith.

In the contemporary world, though, this idea has become far more convoluted with the rise of armed non-state actors challenging the religious legitimacy of Muslim regimes and the authenticity of different official versions of Islam. Insurrectionist Islamists active in many Muslim countries claim to be waging jihad against the incumbent regimes, which they have declared un-Islamic. Their signature weapon is suicide attacks, which they insist are “martyrdom operations.” Increasingly since the 1980s, thousands of individuals have been recruited to become human bombs in attacks, which have mostly targeted fellow Muslims but also significant numbers of Westerners and other non-Muslims. Somewhat paradoxically, jihadists refer to suicide bombers as martyrs, while those killed in the attack (civilians and security personnel) are also declared martyrs by those who oppose the jihadists.

One of the driving forces of the phenomenon referred to as jihadism has been this notion of martyrdom. Legions of young Muslims – male and female – have been lured to the jihadist enterprise after being seduced by the idea that they will become martyrs if they join the cause of al-Qaida and more recently the Islamic State, as well as other jihadist groups. International efforts to defeat jihadists have failed because Muslim regimes have proved incapable of mounting an effective counterideological assault. In the end this war will only be won when concepts such as martyrdom are not as contested as they are today.

In his Nov. 28 assessment, “Islam and Terrorism,” Geopolitical Futures founder George Friedman made two significant observations. First, it is intellectually dishonest to claim that jihadism has nothing to do with Islam. Second, Muslims who oppose jihadists are the only hope in defeating this scourge. The fact that martyrdom and many other concepts such as jihad and Islamic governance are contested means that Islam, collectively, is at issue.

Muslim regimes battling jihadists will have to reclaim ownership of these concepts, in particular, martyrdom. The rest of the world cannot settle this dispute. If it tries, it risks making matters worse. Only Muslim states can ensure that their citizens are not being lured by radical Islamist impulses. This cannot happen without regaining intellectual leadership over religious discourse.

The chances of that happening anytime soon are slim because there are multiple intra-Muslim conflicts brewing at the same time. The problem is not just that we have jihadists seeking to subvert incumbent Muslim regimes. Complicating the battlespace are the wars in Syria, Iraq and Yemen, which are sectarian struggles. The Saudi-led Sunni camp and the Iran-led Shiite bloc are both claiming that they are waging a legitimate struggle against “deviants” and both honor their dead as martyrs.

What we thus have is the lack of a coherent Muslim mainstream. To a great extent this explains why jihadists are gaining ground. Reversing this trend requires not just viable political economies but also the reappropriation of the discourse on Islam. This will involve breakthroughs in fresh reinterpretations of the religious texts to combat the raw cutting and pasting of medieval exegeses that is common to both religious traditionalists and political radicals. The physical war will only be won once there is enough intra-Muslim consensus on these contested concepts.

The Tribal Roots of the Caliphate System