The United States has been at war for 15 years. There is still a debate over whom the United States is waging war against. Some say we are fighting terrorism. Others say we are fighting Islamic terrorism. The debate is between those who regard the wave of terrorism undertaken by al-Qaida and the Islamic State as linked significantly to Islam and those who want to distinguish between Islam and these groups in order not to tar an entire religion with the actions of a few.

This would normally be an academic argument but given the fact that U.S. forces are engaged in combat, a disagreement over whom they are fighting is significant. This is particularly the case since retired Army Lt. Gen. Michael Flynn, former head of military intelligence in Afghanistan and former director of the Defense Intelligence Agency (DIA), has been appointed President-elect Donald Trump’s national security adviser. Flynn was a strong advocate of using the Islamic terrorism label and was forced out as head of the DIA at least partly over this dispute. President Barack Obama vigorously fought against mentioning Islam in naming America’s opponents in this war.

Clarity in defining the enemy is essential to waging war. If the enemy is terrorism, then the enemy is not a political movement but a method of waging war, regardless of who used the method. It was actually President George W. Bush who first made this argument when he referred to the “axis of evil”: Iraq, Iran and North Korea.

All of them might have been engaged in terrorism, but none of their governments was directly involved in the Sept. 11 attacks. If they were, then the U.S. would have to go to war with all three, but Bush did not immediately go to war with any of them. In 2003, he ordered an invasion of Iraq but never got around to Iran and North Korea.

It is important to understand why Bush included North Korea in the group. It was precisely because it was not an Islamic state. The U.S. could not wage war against al-Qaida without the support of some Islamic states’ militaries and especially their intelligence apparatuses. If the war seemed focused entirely against Islam, their willingness to help, even if they were inclined to, would disappear. And the U.S. lacked detailed intelligence on its enemy, al-Qaida.

Obama and Bush used an identical strategy of refusing to define this as a war between the U.S. and Islam. Yet, for 15 years, U.S. troops have waged an ongoing war almost exclusively against Muslims. Not all Muslims were the enemy, but all of the enemies were Muslim. But a pretense was maintained that the enemies were only incidentally Muslim. Whatever the political utility in the region of keeping up this pretense, it undermined warfighting effectiveness by focusing on the forces being fought and not on the matrix from which they arose. 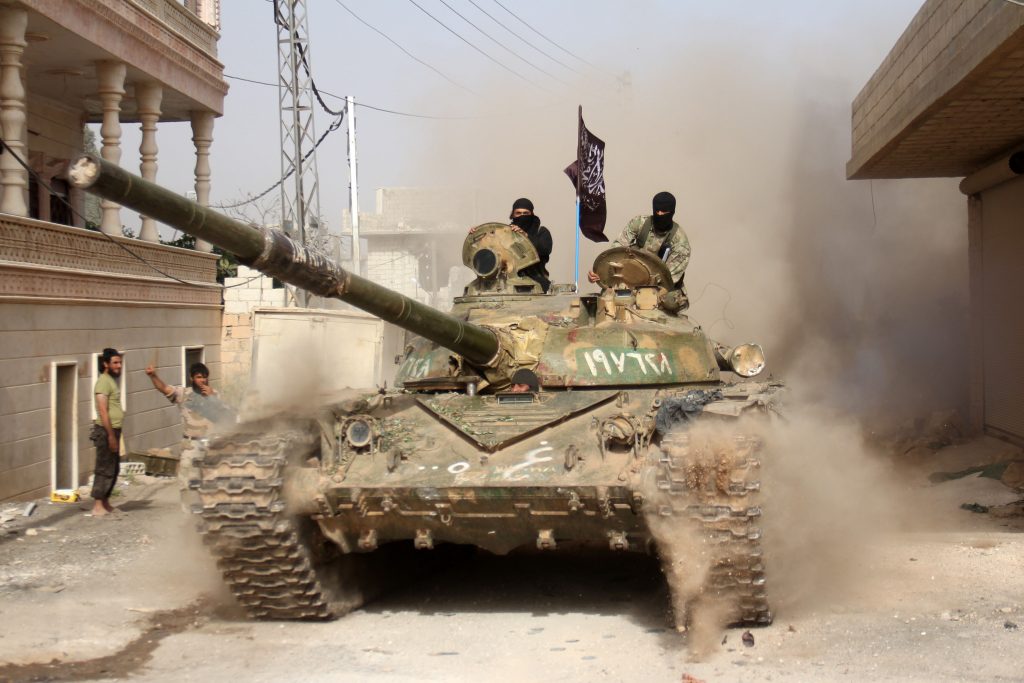 Fighters arrive in the Syrian city of Idlib, on May 28, 2015. OMAR HAJ KADOUR/AFP/Getty Images

Calling the Enemy by Its Name

However the U.S. identifies the enemies, the enemies identify themselves as Muslim, as the term Islamic State would indicate. Indeed, IS regards itself as the heart of Islam, fighting to restore the caliphate that history and the Christians stole from it.

True, they are suspicious of other Muslims, believing they are hypocrites for speaking one way and acting another. And other Muslims are appalled by what al-Qaida, the Taliban and IS have done. Nevertheless, eliminating Islam as a fundamental and self-defined characteristic of these groups leads not only to conceptual confusion, but also to military failure. I would argue that part of the failure of U.S. operations in the past 15 years has to do with the failure to understand the enemy.

The U.S. has treated al-Qaida and IS as self-contained organizations. The theory has been that if the organizations were destroyed, their military capabilities would disappear. This hasn’t happened in spite of successful operations against individuals and groups. The drone war has focused on locating important members of these groups and eliminating them. The expectation was that with enough levels of command eliminated, the organization would collapse.

In fact, al-Qaida did weaken dramatically under this assault. The dramatically improved intelligence capabilities and precision-guided munitions were successful in identifying key personnel and killing them.

The problem was that as al-Qaida declined, IS rose to take its place. As factions of the Taliban were weakened, other elements replaced them. In other words, although the operations were extremely successful, the war was not won. And this arose from a basic misunderstanding of whom the U.S. was fighting.

Al-Qaida was not an isolated organization. It was a manifestation of a powerful stream of Muslim thought and the Muslim people. By not accepting al-Qaida’s claim that it was the Muslim jihadist warfighting tradition incarnate, there was no chance of defeating it.

The reason was simple. Al-Qaida was not operationally a small, sparse and diffuse organization. With intelligence and weapons, it could be destroyed. But that was only the operational part. It had a significant base of support that was capable and willing to provide personnel in large amounts to sustain and, if necessary, replace it.

The hard truth was that the U.S. was fighting and winning the wrong battles for 15 years. The organizations it was destroying were not the real challenger. The real challenger was the movement underlying the organizations. Without engaging that movement, and either destroying it or making peace with it, the war would be interminable. For the U.S., it would be a war of endless success leading to endless war.

However, to engage the movement, it was necessary to acknowledge that al-Qaida, IS and the Taliban are not stand-alone entities, but entities that arose from and were part of a much broader movement. And in thinking about how to deal with that movement, understanding that it was an Islamic movement was indispensable.

This would make it a harder war to fight. Defeating a religious movement is much harder than killing individual men. In many ways, it is not a military operation at all.

Whatever it is, and however you confront a movement that believes itself to be holy and death to be redemption, success is vague and far away. It is easier to refuse to recognize that the terrorists are part of a more significant social and political movement or that the movement is part of a particular religion. It makes it possible for the U.S. to focus on counting its successful operations, while ignoring whether the war is being won.

The Key to Winning the War

Islam is a religion of about 1.7 billion people. If all Muslims in the world support jihad, then the war is lost. Defeating the force that 1.7 billion people could field is not possible. This problem is solved by the fact that Islam has many strands, as do most religions. The U.S. is fighting one strand.

This poses two problems for the U.S. The groups’ operational strength is that they can blend into the general Muslim population, beyond the movement. Because of this, identifying terror threats is enormously difficult. Second, doing things that enrage those Muslims who are not part of this movement or are hostile to it is foolish. Defeating 1.7 billion people is not going to happen.

Driving them into the movement that has given rise to U.S. enemies is equally irrational. The overriding strategic necessity is to split the Islamic world, and keep Muslims hostile to the movement that underlays al-Qaida and other jihadist groups from joining it.

There are those who say that all Muslims are the same. If this is true, then the war has been hopeless from the beginning. But it is not true, and the grand strategy must be to use the tensions within the Muslim world to contain the underlying jihadist movement.

To do this, the U.S. must first avoid alienating all Muslims, and second face the obvious – that the terrorism being fought is Islamic. Without understanding the enemy, it cannot be defeated. But the only hope of some type of victory is that all Muslims do not belong to this movement. Denying that Islamic terrorism exists will cost the war. Arguing that all Muslims are Islamic terrorists means accepting the war can’t be won at all.