New South Korean President Moon Jae-in and U.S. President Donald Trump will try to demonstrate a united front on the North Korea situation during Moon’s visit this week to Washington. But any display of joint resolve would belie a different reality: For all their shared interests, the stalwart allies will not see eye to eye on North Korea at the time when cooperation is needed most.

The U.S. is laying the groundwork for military action against the North’s nuclear and missile programs, seeking to systematically demonstrate that all measures short of war – international isolation, U.N. sanctions, Chinese pressure and a return to negotiations – will prove insufficient. South Korea, which would bear the brunt of the war, is looking for a way out. If Washington is compelled to move decisively toward war, the South cannot prevent it. But Seoul will try to stall the U.S. – if only for the fleeting hope that circumstances will change in its favor.

South Korea’s strategic outlook is rooted in its geographic position. Wedged between Northeast Asia’s foremost historical powers – China, Japan and Russia – the Korean Peninsula is often referred to as the “shrimp among whales.” Despite the threats emanating from the North, over the long term, South Korea’s biggest geopolitical challenges will once again flow from the stronger powers to its west and east.

Even today, Beijing and Tokyo occupy as much of Seoul’s attention as Pyongyang. China’s economic retaliation in response to Seoul’s deployment of the Terminal High-Altitude Air Defense, or THAAD, system, for example, has highlighted the South’s growing economic reliance on the Chinese and the inevitable overlap of their military interests. And though Japan has developed into an ostensible liberal democratic ally for the South, ties have remained overshadowed by the history of Japanese invasions, spanning from the 1500s to World War II, and by Japan’s gradual re-emergence as a regional military power, both of which have hindered bilateral cooperation. For example, though the North is a substantially bigger threat to the South than Japan is, Seoul stalled a pact on Japanese-South Korean intelligence sharing on Pyongyang until late last year. Last week, South Korea held annual drills to practice defending islands disputed not with the North but with Japan.

Historically, the South has pursued a strategy common to “middle powers” that have little room to maneuver among stronger neighbors: balance ties with the bigger powers and play them off each other where possible, positioning yourself as essential to the economic prospects of the entire region. This strategy puts a premium on agility and independent decision-making – and the ability to project enough power to preserve them. The biggest drag on this strategy has been the division of the Korean Peninsula. The buildup of hostile forces across the demilitarized zone has forced South Korea to focus its power projection capabilities northward. It also saddled the South with a heavy dependence on U.S. defense guarantees, so much so that it subordinates its strategic preferences to those of Washington.

Despite occasional bouts of opposition from liberals and nationalists who see the American presence as driving the North to its extreme positions, South Korea has generally remained keen to keep the U.S. security umbrella firmly in place – for example, by repeatedly agreeing to delay the return of wartime operational command over the South’s military from the Americans. U.S. guarantees, after all, have enabled Seoul to limit its defense spending and focus instead on harnessing Northeast Asia’s economic vitality to enhance its regional influence. Still, South Korea has little interest in being used as a geopolitical football by outside powers. And its swings between hard-line and “sunshine” policies toward the North have not always come in conjunction with Washington’s preferences.

Today, South Korea is continuing the familiar pattern, moving from the relatively hard-line approach of Moon’s predecessor, Park Gyuen-hye, to Moon’s longstanding pledges to tilt more heavily toward engagement. But this time, the South is stuck between a U.S. and a North Korea whose respective geopolitical imperatives have finally put both on a path toward war. 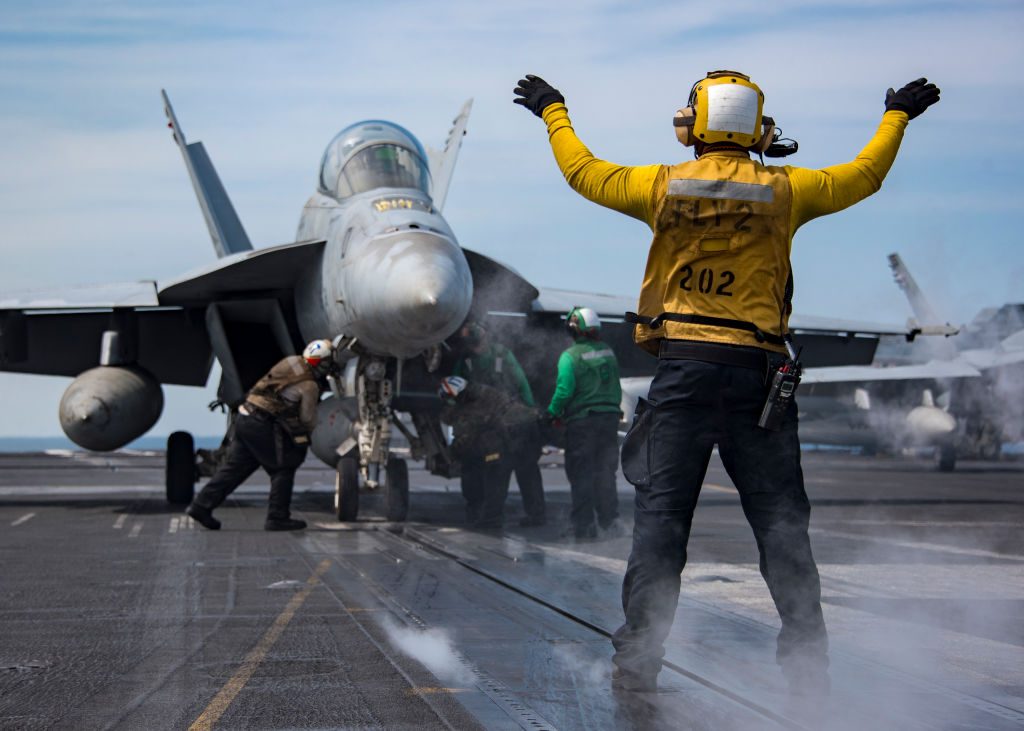 In this handout photo provided by the U.S. Navy, sailors conduct flight operations May 2, 2017, aboard the Nimitz-class aircraft carrier USS Carl Vinson (CVN 70) in the western Pacific Ocean. Sean M. Castellano US Navy via Getty Images

If North Korea develops the ability to attach a miniaturized and ruggedized nuclear warhead to an intercontinental ballistic missile, it can nuke Los Angeles. The United States will not tolerate this. For South Korea, an ICBM would change little because it would not pose a substantially greater nuclear threat to the South Korean heartland than the North’s intermediate-range missiles already pose. Meanwhile, though there are doubts about the potency of the North’s aging conventional rocket and artillery capabilities, the possibility that the North can already inflict major damage on population centers like Seoul is very real and immediate. Nearly half of all South Koreans live well within the strike range of Northern artillery batteries amassed along the DMZ.

As a result, Seoul does not share Washington’s urgency to prevent Pyongyang from developing an ICBM, and it would bear a much higher cost if the U.S. chooses to go to war. This, at minimum, puts the U.S. and South Korea on different timelines for military action. The U.S. doesn’t want war, but it thinks the North has already crossed a red line. The South has an immediate imperative to give other means of pressure every chance of success.

So here the question becomes: Does South Korea get a vote on whether the U.S. goes to war with the North – or at least a vote on when the war takes place? Given the growing urgency in the U.S., South Korea cannot be certain that it will. And if war breaks out, the South would have no choice but to move decisively to join the fight in order to save Greater Seoul.

The South has a better chance to influence the U.S. timeline for action than it does to stop the U.S. from acting. One lesson the U.S. learned in the Middle East is that how the start of a war is perceived globally has strategic significance. Washington’s intent regarding North Korea is to demonstrate that it has left no stone unturned before taking military action. This creates an opportunity for Seoul to try to stall American action by making the case that non-military options remain. The South Koreans will try to bring the North to the table, however fruitless engagement has been in the past, to create at least the appearance of progress through dialogue. To maximize its freedom of action, Seoul could again tilt away from its allies and throw its weight behind a dialogue process led by the Chinese, who share its interests in staving off war. With the U.S. making its intentions toward the North clear, Seoul may think the conditions will ripen just enough to compel Pyongyang to cooperate.

This strategy will have a short shelf life. An indefinite suspension of U.S.-South Korean military exercises, as proposed by Beijing and demanded by the North, would require South Korea to stomach the prospect of a dramatic break from the U.S. and to carry its own security burdens. It would also make Kim Jong Un the decisive player in the standoff. The Chinese can’t bring him to heel, and U.S. will not be any more inclined to pin its security on blind hope that Kim will risk the legitimacy of his regime by standing down.