On April 12, U.S. President Donald Trump reversed his stance on a number of key foreign policy issues: NATO, Russia, China and Mexico. From a geopolitical perspective, Trump’s remarks made throughout the day validated the constraint theory, which asserts that limitations exist in the real world and will ultimately force a leader or a country to behave in a particular way. Geopolitical Futures has written extensively on how constraints would eventually provoke a change in the Trump administration’s policies. With these reversals now made, here is the rationale for why he has backtracked on some of his key campaign promises.

Alongside NATO Secretary General Jens Stoltenberg, Trump made an unequivocal reversal on the organization when he stated, “I said it [NATO] was obsolete. It’s no longer obsolete.” He preceded this comment with acknowledgement that NATO had adapted and now meets the U.S. demand for the organization to aid in the fight against terrorism. The comment most likely aimed to justify to the public Trump’s reversal on NATO. The comment conveniently painted a picture of NATO as acquiescing to the U.S., thereby allowing Trump to attempt to save face. 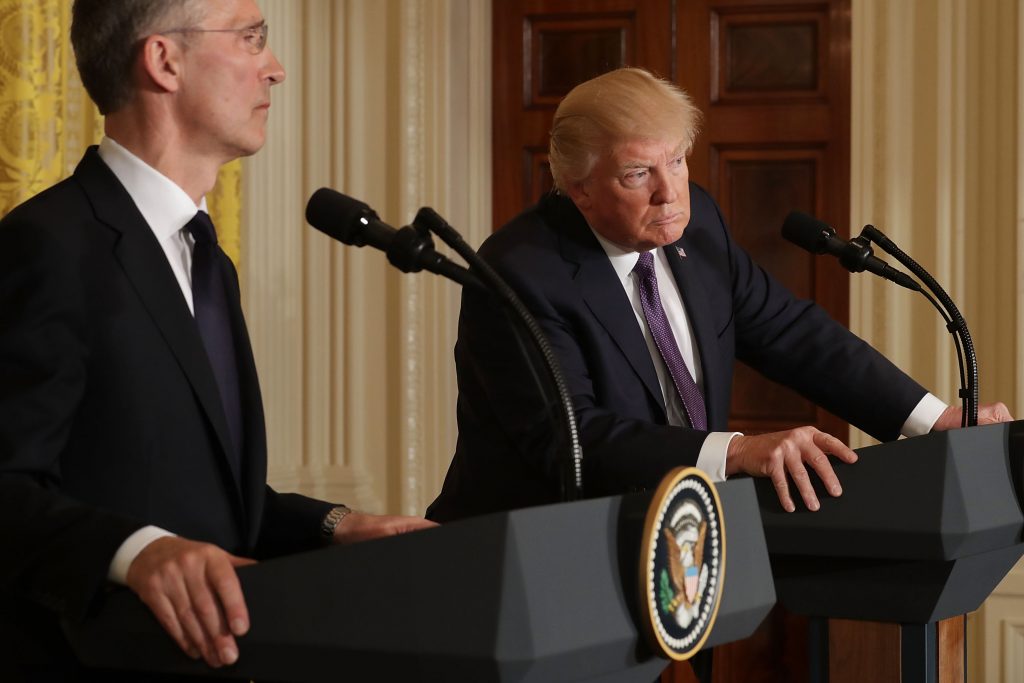 Trump’s previous rhetoric implying that the U.S. was ready to abandon the group was not to be taken literally, but rather as simply campaign talk. Once in office, leaving NATO was never truly an option. Rather, previous rhetoric served as a threat to European countries to send the message that Washington would value bilateral relations more than the larger group. However, the domestic and foreign demands that Trump faced – many of which still subscribe to the ideal of multilateralism and internationalism – forced him to recant this view and adopt a more moderate and cooperative stance.

The second clear reversal of opinion occurred when Trump said, “We’re not getting along with Russia at all. We may be at an all-time low in terms of a relationship with Russia.” In the lead-up to the 2016 election, Trump did not hold back in expressing his admiration for Russian President Vladimir Putin and his desire to bring U.S.-Russian relations to a cordial level.

However, the vision of Moscow and Washington becoming allies does not align with geopolitical realities. Russia seeks to expand its influence beyond its borders to create a buffer zone around core areas like Moscow and St. Petersburg. The westward expansion of Russian influence threatens Europe, which the U.S. does not want to see dominated by Russia. Washington needs to keep both Russia’s and Europe’s power in check, and an effective way of doing this involves allowing them to confront one another. Essentially, what is good for the U.S. is the exact opposite of what is good for Russia. There is little to no middle ground for compromise. This became glaringly evident after U.S. Secretary of State Rex Tillerson’s meeting with Putin in Moscow on April 11-12. In a press conference after the meeting, Tillerson called for an end to the regime of Syrian President Bashar al-Assad (which Russia still supports) and criticized Russian interference in U.S. elections. Trump’s statements finally aligned with the geopolitical realities set forth by the inherent conflict of interest between the United States and Russia.

Most important was the reversal on China. Trump not only revealed that the U.S. would offer a good trade deal to China in exchange for help with North Korea, but also that he would no longer consider China a currency manipulator. During his presidential campaign, Trump strongly criticized China for manipulating its currency and using other unfair trade practices that resulted in a large U.S. trade deficit with China. He promised to rectify this imbalance once in office, but the realities he encountered prevent him from following through.

The escalation of the potential threat North Korea poses to the United States and its allies forced Trump to shift his stance on China. Between campaign season and now, North Korea became a potential threat. Concern is growing that Pyongyang may be closer to having the capability to adhere a nuclear warhead onto a medium-range missile. As a result, the U.S. must consider the possibility of Pyongyang posing a viable threat by obtaining a nuclear weapon small enough to mount on a warhead. Suddenly, the U.S. could no longer ignore that threat. Enter China, the country that has continually presented itself as a mediator that can keep North Korea in line.

As for Mexico, the change has had a lower profile. Its significance lies in what hasn’t happened. The U.S. has not left NAFTA, and construction of Trump’s promised border wall is not even close to beginning. Trump has downgraded his NAFTA rhetoric from leaving the association to revising the current agreement. The border wall has yet to receive any congressional funding, and it already faces at least one lawsuit. This shift can be largely attributed to significant state economies that share a border with Mexico, specific economic sectors (especially farming) and special interest groups that depend on trade with Mexico.

The most important takeaway from all of Trump’s April 12 comments is that, like any other president, Trump is succumbing to the constraints surrounding him. All presidents must adapt to reality after the campaign has ended. In this case, Trump’s confrontation with reality and his reversals are more jarring than his predecessors’ due to the extreme positions he took during the campaign and the urgency with which he needs to regain support. Trump is a weak president who lost the popular vote to his competitor but managed to win the White House thanks to the electoral college. He does not have control of or broad support from the party with which he was affiliated during the elections. His approval rating, according to Gallup, is about 41 percent, among the lowest presidential approval ratings this soon after Inauguration Day.

Trump needs to gain support fast, and that requires radical action. He won office by portraying himself as a radical isolationist, but such an extreme stance alienated him from centrist allies whose support is necessary for him to govern. The sense of urgency comes from the fact that his tenuous relationship with Congress cannot be completely lost and may still be salvageable. So Trump has made moves to radically shift his position on several key issues hoping to gain centrist support, as outside constraints have made his prior statements no longer operative.