On Aug. 28, we wrote that North Korea’s testing of short-range ballistic missiles over the weekend could be seen as an act of conciliation. Later that day, North Korea tested another missile whose message was unmistakable. The missile – the Hwasong-12, which hypothetically has just enough range to hit parts of Alaska but not the U.S. West Coast – flew over Japan. Initially there was concern that the missile could be targeting Japan itself, causing the government in Tokyo to issue flash warnings to tell citizens in the north to seek shelter. The missile ultimately landed in the ocean.

The test on Aug. 28 was clearly an escalation, but it, too, must be considered in the context of ongoing negotiations. With the proper perspective, the launch seems less like the irrational maneuverings of an unpredictable dictator and more like a regime expressing displeasure with a hang-up either in negotiations or in the direction they’re taking.

A test of this sort is disruptive, but there’s no reason to believe negotiations with North Korea have stopped. North Korea wouldn’t have cut backchannel communications before the launch, because it wouldn’t want the launch to be seen as a pre-emptive strike, triggering a counterstrike and a war with the United States that it doesn’t want. It is true, however, that the launch was unprecedented. North Korea has previously launched missiles for its space program that flew over Japan – in 1998 and 2009 – but those were high enough that they were not in Japanese airspace. Tests that don’t follow old patterns are more likely to be interpreted as an actual attack, since it’s unlikely that an attacking force would mimic procedures that it had previously made public. This means that while Kim Jong Un is walking a fine line, he believed this test was within the tolerable limits of potential provocation.

The response from the U.S., Japan and South Korea has been relatively muted. Japan carried out a series of anti-missile drills, presumably to respond with a similar show of strength. But what Japan didn’t do is just as telling. The government’s J-alert system notified the public several minutes before the missile flew overhead, and yet the government didn’t try to shoot the missile down. This means one of two things: either Japan did not truly feel threatened by the launch, or Japan is incapable of reliably targeting and destroying incoming ballistic missiles and didn’t want to expose this vulnerability with a public failure. Either way, Japan’s response indicates that negotiations are still ongoing; if Japan believed North Korea had actually targeted its mainland, it would have been willing to take more risks with whatever capabilities it does have. 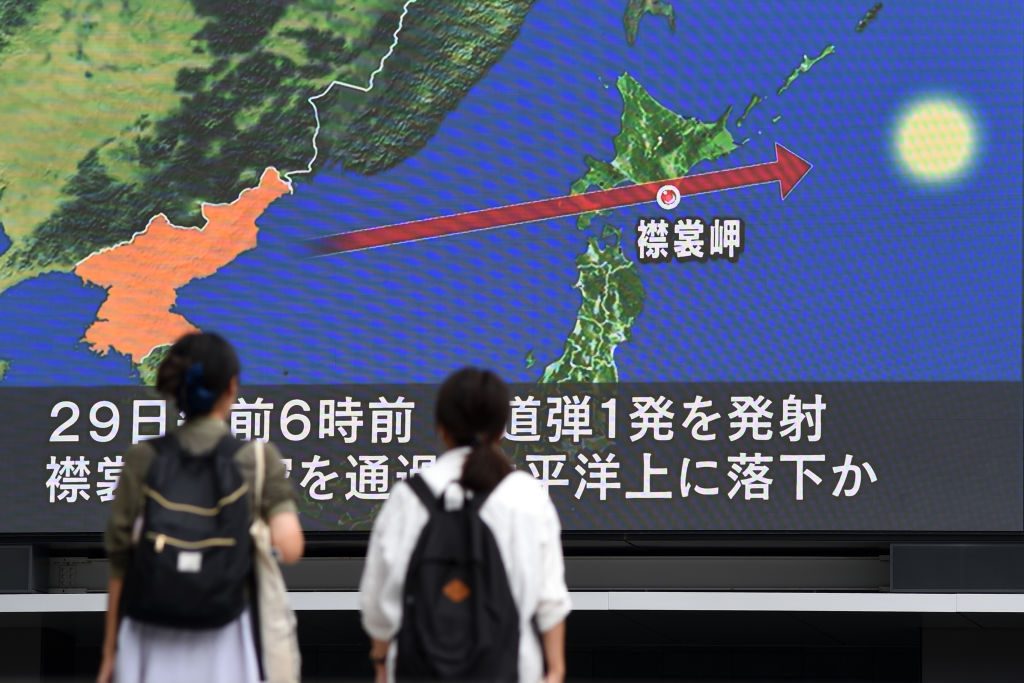 Pedestrians in Tokyo watch the news on a huge screen displaying a map of Japan and the Korean Peninsula on Aug. 29, 2017, following a North Korean missile test that passed over Japan. TOSHIFUMI KITAMURA/AFP/Getty Images

The American response was also subdued. In the past, the U.S. has answered North Korean missile tests with overflights of B1-B strategic bombers, a clear threat to the regime. This time, however, South Korea conducted a live bombing exercise with four F-15K fighter jets. The press release indicated this was a practice run (using bunker-busting bombs) for an attack on North Korea’s leadership, but fighter jets – which carry fewer munitions than a strategic bomber – hardly make the same threat as U.S. B1-Bs.

South Korea doesn’t appear to be interested in going much further for now. In addition to the F-15K drills, South Korea released some videos of its own prior ballistic missile tests. It also said in a press release that it is now drafting a plan that would account for “full-fledged” war with North Korea in the event that the North launches an offensive on the South. Although South Korea is trying to appear as though it is getting tough on North Korea, it’s inconceivable that the government in Seoul doesn’t already have several plans for a response to a North Korean attack. They’ve had seven decades to prepare.

Japan falls under the U.S. security umbrella, but it’s the South Korean and U.S. militaries that are the major threat to North Korea. So the obvious question is: Why Japan?

For starters, Japan once perpetrated a brutal occupation of Korea. It was Japan’s invasion – and subsequent loss – of Asia in World War II that created the circumstances that allowed for the founding of the North Korean regime. North Korea has not forgotten the threat that a powerful, aggressive Japan can pose to the Korean Peninsula.

More recently, Japan imposed new unilateral sanctions last week against the North. It’s difficult to tell how effective sanctions have been against the regime. To this point, coal and other export sanctions have cost the country hundreds of millions of dollars with no noticeable effect on the progress of its missile technology. If anything, it seems like the cadence of North Korea’s missile tests has increased following the implementation of sanctions. During a parliamentary briefing on Aug. 28, however, South Korea’s intelligence agency said the North had begun a campaign to identify “disgruntled citizens” as public fatigue with sanctions has grown. Though the public announcements of intelligence agencies shouldn’t be taken at face value, it’s possible that sanctions are beginning to affect Pyongyang’s control of its domestic situation. In that case, Japan’s latest sanctions could threaten to actually damage the regime’s position.

Given the limited options on the table for a legitimate compromise, it seems like both sides are realizing that whatever compromise they discuss would be extremely difficult to implement. For a deal to happen, the U.S. would need to ensure that North Korea has not only abandoned its nuclear weapons program, but also that its ability to resume the program is removed. This would mean intrusive inspections that the North is unlikely to accept. At the same time, the North Korean regime would need certainty that it is, in fact, secure from the U.S. and its allies, which would likely entail a diminished U.S. presence in the Pacific. Washington is unlikely to accept these terms either.

Kim Jong Un gambled that he correctly understood his adversaries’ red lines when he gave the order to conduct the latest missile test. For now it appears he was right, and if so, it probably bought him more leverage in the negotiations. But we also can’t mistake a casual response from the U.S. as acceptance, since a purposeful phase of cooling tensions is what we’d expect to see before an actual strike.

Iran Sanctions: Out With the Old, in With the New