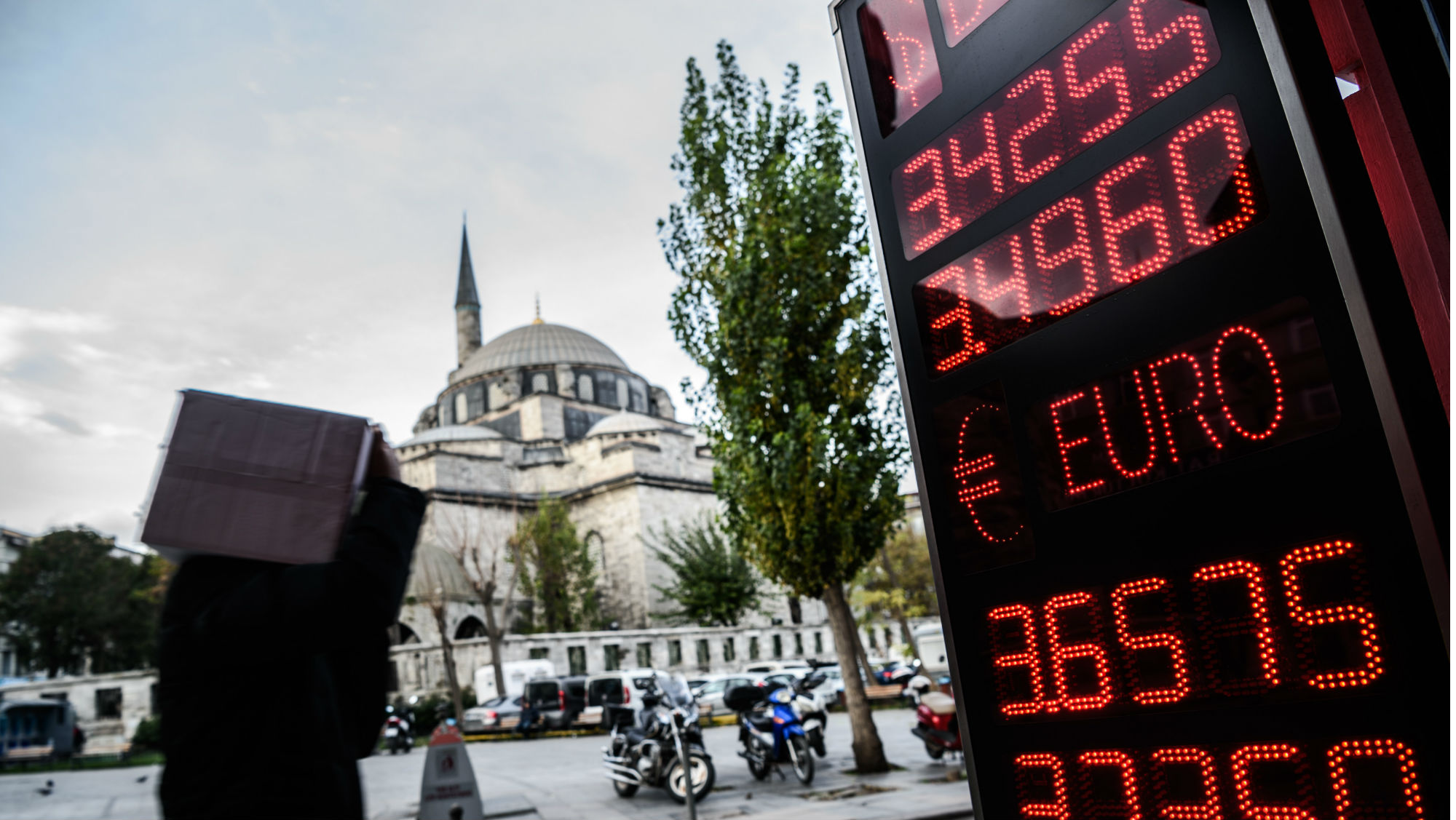 A country’s finances, studied in isolation, can’t tell us much about that country’s motivations or flexibility. Yet finances play a critical role in how a state funds things like social services and defense, pillars of the state’s geopolitical power. Finances can also help or hurt economic growth, which affects domestic politics. A geopolitical assessment of a country is therefore incomplete without an investigation of its finances.

When looking at a state’s finances, however, it’s easy to get bogged down in technical complexity or to be led astray by ultimately trivial aspects. This analysis will zoom in on one aspect of Turkey’s financial system: its external debt position. It will discuss the risks inherent in Turkey’s debt position, but with the purpose of describing how those risks will influence Turkey’s actions in the international arena. We chose to focus on external debt because it can, under certain circumstances, diminish the control that a sovereign government has over its own economy.

GPF anticipates that Turkey will become a more powerful regional actor, asserting itself farther abroad – including into the chaotic Middle East – both to protect its borders from groups it considers terrorists and to prevent Iran from gaining and holding territory that it can use to threaten Turkey’s interests. We do not, however, expect a smooth ascent. As with most events that unfold in the tides of history, trends emerge not in linear progressions but in fits and starts. Turkey’s external debt poses a real, albeit not a catastrophic, threat to that progress. 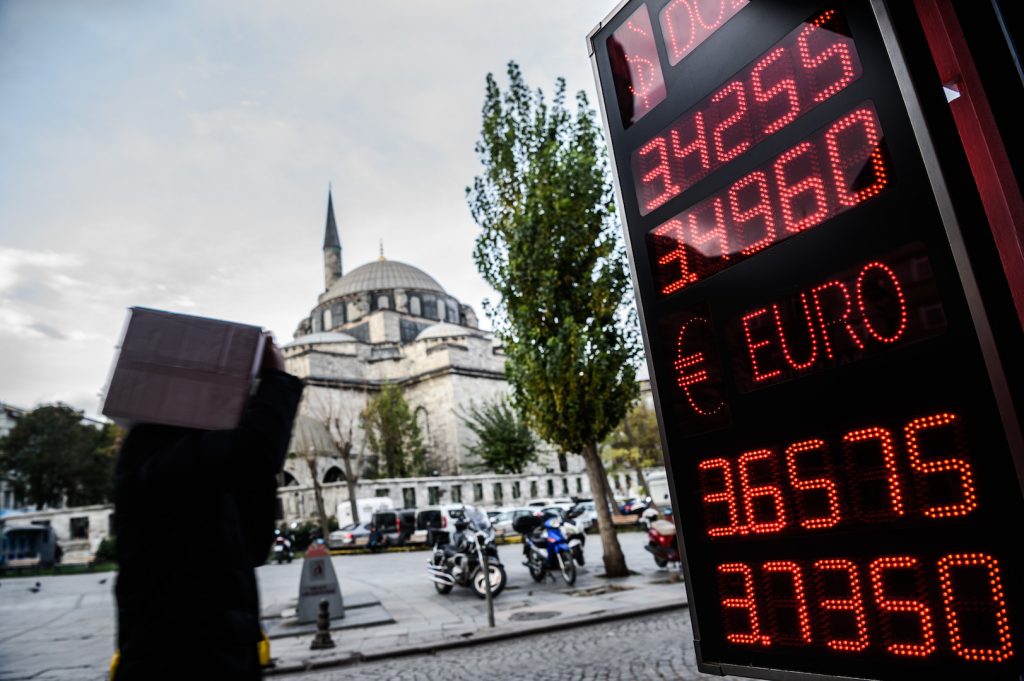 What Is External Debt?

External debt comes with challenges that debt denominated in a domestic currency does not. In the case of Turkey, if it borrows in liras, then it pays interest and principal back in liras. If the lira depreciates against other currencies, Turkey’s debt doesn’t get more difficult to service. In fact, it gets easier to service, since it owes the same amount of liras, but the currency is worth less. Increasing the money supply (printing money) lets a country pay back its debt with cheaper currency, effectively inflating its way out of a debt burden. Though printing money carries its own risks, it still leaves the state and its central bank as masters of their debt destiny.

External debt, however, doesn’t offer this flexibility. Instead, it links the borrower’s ability to repay to the exchange rate between the lira and a foreign currency. Since the debt must be repaid in a foreign currency, if the lira depreciates against that currency, then it will take more liras to service the same amount of debt. For example, if Turkey were to borrow $100 million at a 10 percent rate in U.S.-dollar denominated debt, it would owe $10 million per year. If the exchange rate between the lira and the dollar were 2-to-1, then Turkey would owe 20 million liras per year. If the lira depreciated relative to the dollar and the exchange rate became 4-to-1, then Turkey would still owe $10 million, but that would be equivalent to 40 million liras per year. In effect, the cost of its debt service would double simply because of exchange rate fluctuations.

Though Turkey may have dollar reserves to help alleviate this situation, it cannot print dollars to inflate its way out of this debt as it could with lira-denominated debt. This is the fundamental problem of external debt: If the borrowing country’s currency were to depreciate, its debt would become costlier to service. In the public sector, this forces the government to allocate more of its budget to debt repayment. In the private sector, it restricts investment capital, since money that could have been used to invest in productive enterprises must instead be diverted to service debt. More money spent on debt service means less spent on consumption and investment, and, therefore, slower economic growth.

Turkey’s total external debt (public and private) has been rising gradually over the past five years, reaching 52 percent of gross domestic product by the second quarter of 2017, a relatively high figure for a developing country. 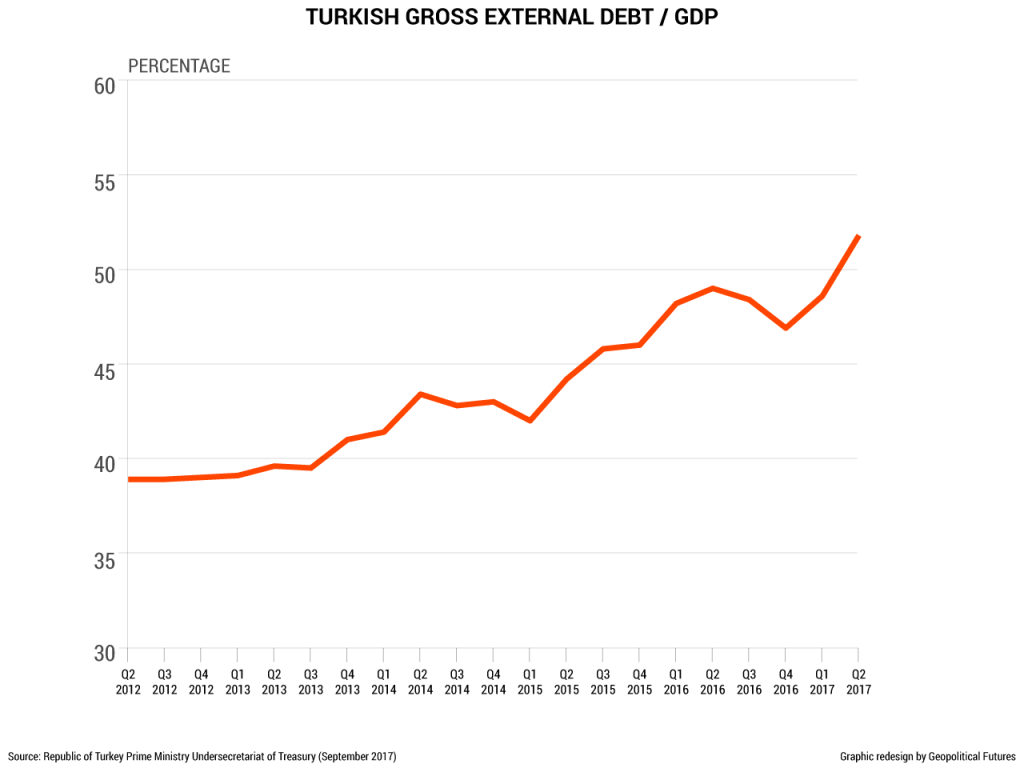 Most of Turkey’s external debt – about 70 percent – is held in the private sector. Turkey’s state finances are relatively unburdened by debt, with central government debt accounting for only about 30 percent of GDP in 2016. As we will discuss later, however, the increasing burden of private-sector external debt nevertheless has ramifications for the Turkish government.

If external debt is so risky, then why is Turkey taking on so much of it? The answer lies at the intersection of politics and economics. Much of Turkey’s external debt is a result of the need to attract sufficient capital to fund domestic stimulus projects. President Recep Tayyip Erdogan is pushing stimulus to maintain economic growth to keep both the public happy and himself in power. The most notable of these stimulus projects is a credit guarantee – extended by the government following the failed coup attempt last year – in an effort to encourage more lending and investment. Much of the investment capital that Erdogan hopes to unlock, therefore, comes from private banks extending new loans, albeit with a government guarantee.

To lend money out, however, the banks have to have money to begin with. Banks acquire funding through two basic sources: deposits and borrowing. In Turkey, however, where the national savings rate is low, banks are struggling to attract sufficient deposits to meet the investment demands of Erdogan’s stimulus. They therefore have had to turn to foreign borrowing to provide those funds. 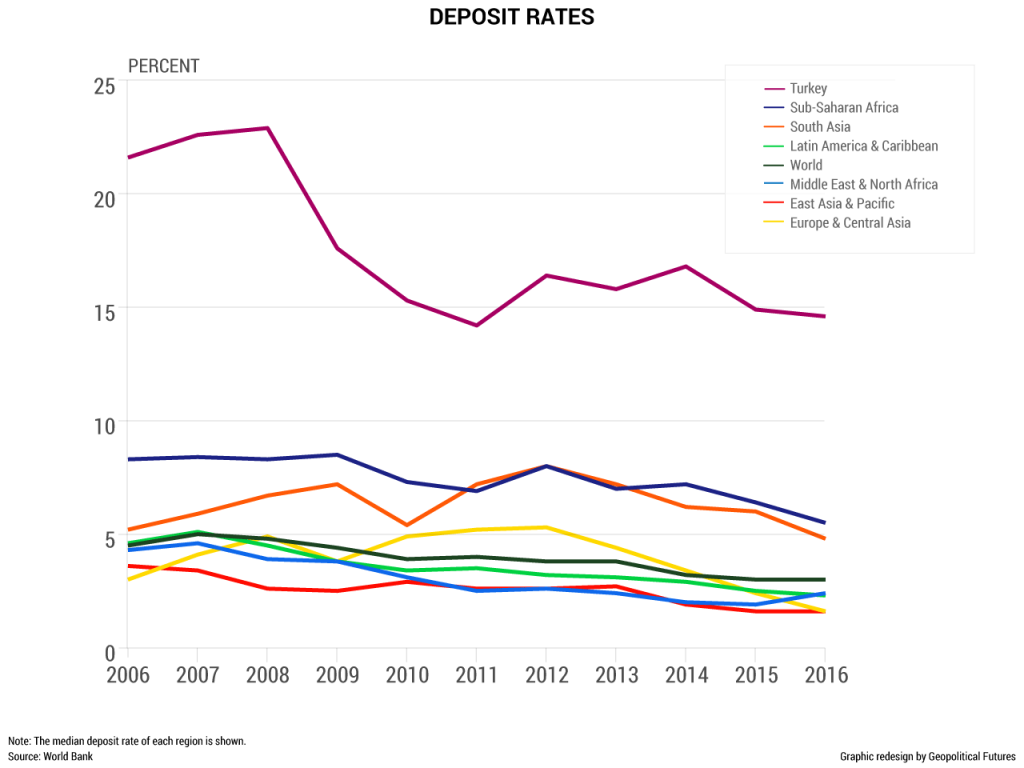 The Turkish government has been working to attract more domestic deposits, since it would enable banks to extend more credit funded by domestic capital rather than money borrowed from abroad. In addition to high interest rates, the government has begun subsidizing those who choose to save by matching up to 25 percent of savings, up to a threshold equal to 25 percent of the minimum wage.

Banks can borrow domestically or from abroad. The challenge with borrowing domestically in Turkey is that, again, deposit rates are low and interest rates are high. There’s only so much capital in the banking system to go around. Turkish banks can borrow from other Turkish banks, but that doesn’t solve the profitability issue – the banks must still maintain a spread by charging high rates to their borrowers. On the other hand, foreign debt – denominated in U.S. dollars or euros – can be secured at lower interest rates (for example, a 10-year U.S. Treasury bond is currently yielding roughly 2.4 percent, and a 10-year German bond is yielding 0.29 percent). This is the main impetus for the increase in Turkey’s external debt.

One important aspect of Turkey’s growing external debt is that consumers are not allowed to borrow debt denominated in foreign currency. Instead, banks are responsible for most of the debt taken on in the private sector; they borrow from abroad in foreign currency and lend capital out domestically in lira. It’s a quick way to get additional capital into the Turkish economy, but it poses a serious risk: If the lira depreciates, banks will receive interest income in cheapened liras and be forced to pay the cost of their own borrowing in more expensive foreign currency. 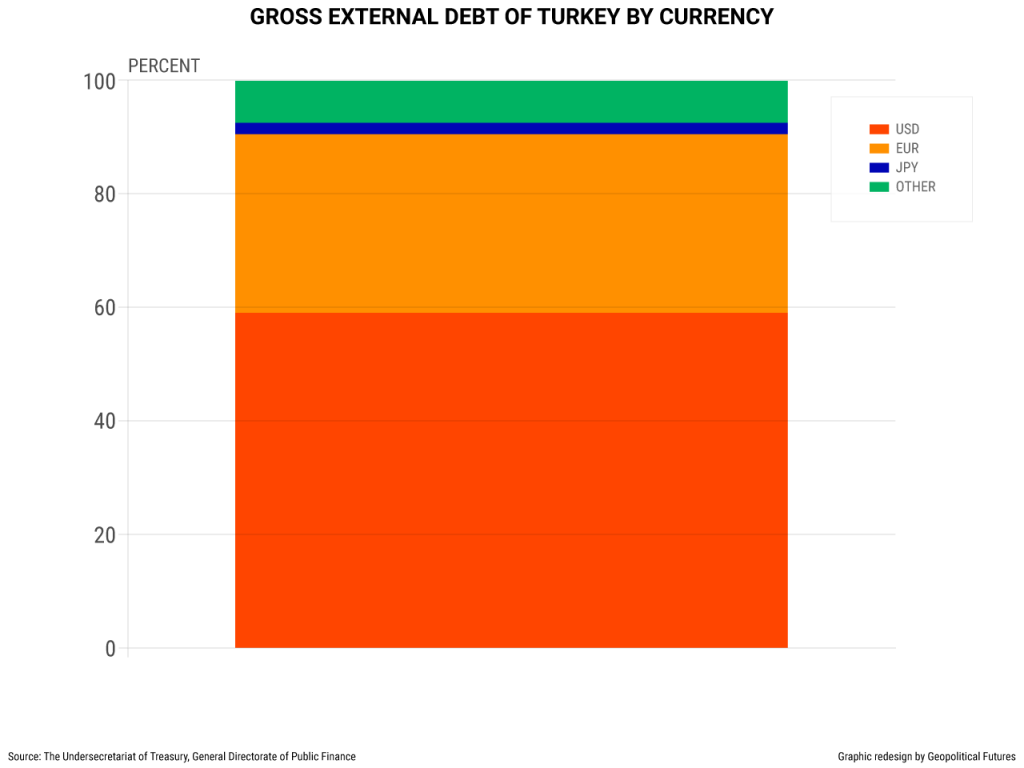 Having enough foreign currency reserves can somewhat – although not entirely – mitigate this risk, since it provides the borrowing country with a certain amount of funds that can’t depreciate relative to the size of the debt denominated in that currency. To assess the degree of risk posed to Turkey by this external debt, therefore, we must look at the amount of foreign reserves that Turkey has on hand.

As it turns out, Turkey has quite a bit of foreign currency in its banking system: 45 percent of all deposits in Turkey are in foreign currency, primarily dollars and euros.

Two questions arise from this observation. First, is the quantity of foreign exchange reserves sufficient to substantially mitigate Turkey’s risk from lira depreciation? And second, why does Turkey have so much foreign deposits in the first place? The first question can be answered by looking at what’s called the loan-to-deposit ratio, which measures outstanding debts relative to the amount of money deposited at banks. Loan-to-deposit ratios below 100 percent indicate that there are more than enough deposits to cover outstanding loans. Ratios above 100 percent, conversely, indicate that there is more credit than can be covered by deposits. 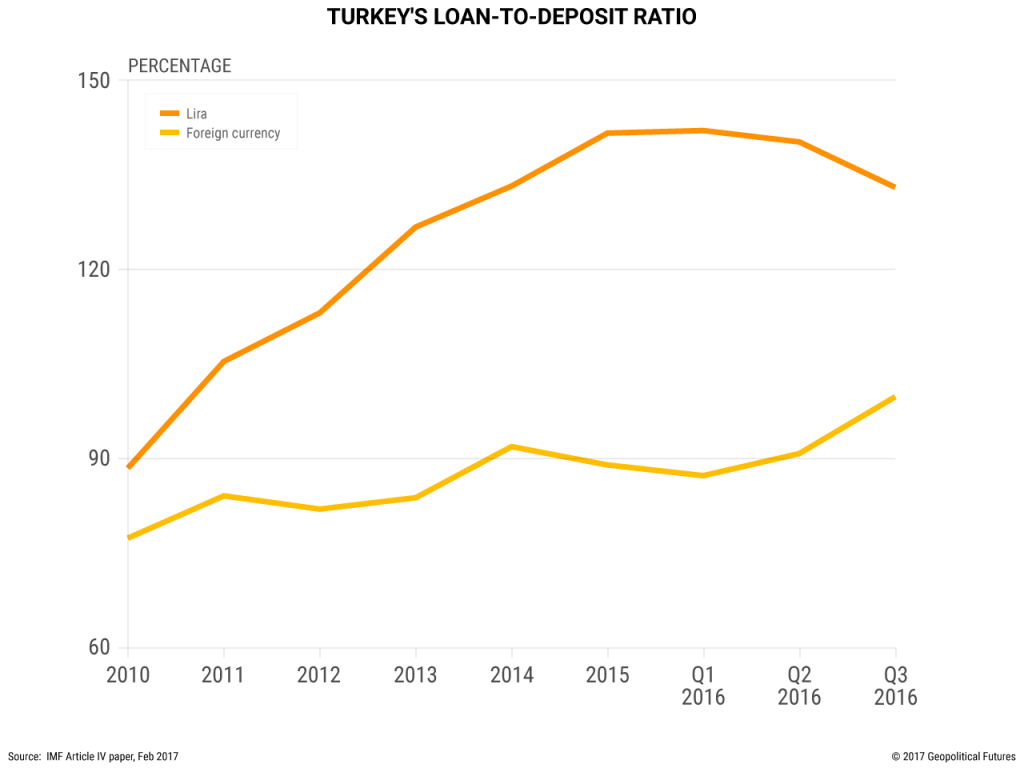 The second question – why Turkey has so much foreign reserves to begin with – is somewhat more complex. It has to do with a tool first implemented in 2011 called the reserve option mechanism.

Banks must hold reserves against their outstanding loans. Usually, those reserves are in the same currency as the loans. In Turkey, however, the central bank lets banks hold reserves against lira-denominated loans in either gold or foreign currency. Though this is at the commercial banks’ discretion, if they choose to hold gold or foreign currency against lira-denominated debt, they must deposit these reserves at the central bank.

The purpose of the reserve option mechanism is to stabilize exchange rates and capital flows in and out of the country and accumulate a reserve of foreign currency. It was designed to work like this: If the lira appreciates, it becomes more expensive to hold lira reserves. Banks will therefore be incentivized to hold more reserves in foreign currency. The greater demand for foreign currency increases the value of the currency and decreases the value of the lira, in theory stabilizing the exchange rate. The same mechanism works in reverse: If lira is relatively cheaper to hold, more banks will sell foreign currency and increase their proportion of lira-denominated reserves.

The reserve option mechanism is not a fixed mechanism. Foreign currency can be held as reserves in place of lira, but it is not at a 1-1 ratio. For example, the central bank might require more dollars or euros to be held in reserve for the same value of liras. This reserve ratio – the proportion between the amount of foreign currency that can be held in reserve – can be changed, turning it into a separate tool of monetary policy. Indeed, this month, the central bank adjusted the reserve ratio to increase the amount of lira-denominated credit offered to the Turkish economy.

The details of the reserve option mechanism get quite technical, but the most important takeaway is this: Despite Turkey’s growing levels of external debt, it has accumulated a substantial amount of foreign currency reserves. These reserves somewhat, but not entirely, mitigate the danger inherent in the accumulation of external debt. Nevertheless, Turkey’s external debt is still a growing risk. Since Turkey cannot print foreign currency, if the lira were to depreciate, the country would have only limited foreign reserves to act as a buffer before being forced to pay back all its external debt in lira. A run on the lira, therefore, could quickly put the brakes on economic growth and threaten Erdogan’s political position.

Though this analysis has focused on the specific details of a specific vulnerability, ultimately it is Turkey’s broader geopolitical position that we are interested in. Turkey has recently been able to get more involved in tackling threats across its border in Syria. Were its economy to suddenly stumble, the government would be forced to refocus inward. Turkey’s economy isn’t pristine even now – unemployment is hovering around 10 percent – but it is nevertheless growing rapidly (11 percent GDP growth in the third quarter of this year), and so long as profits are coming in, Erdogan’s opponents will be less inclined to speak up. If the Turkish elite began to lose money, however, and unemployment rates increased, people would start to ask whether Erdogan’s policies are really working in their best interest, casting doubt on Turkey’s growing interventionism in the Middle East. Threats to its economy, such as its external debt position, therefore constrain Turkey’s ability to project power beyond its borders.

What We’re Reading: The Legacies of Peter the Great and the...