Geopolitics often unfolds slowly, based as it is on broad, impersonal forces that develop over long spans of time. There are periods, however, when these forces reach a critical stage, and a flurry of important events, seemingly unconnected, combine to quickly reshape the world or a region or a nation before settling back down. The Middle East is going through one of these periods right now.

The past week attests to its transformation. It started with Saudi Arabia, which led a seven-nation group that cut diplomatic relations with Qatar over Qatar’s alleged support for terrorist groups and its willingness to work with Iran. The next day, the Kurdish-dominated Syrian Democratic Forces began their offensive to gain control of Raqqa from the Islamic State. Then, just 48 hours after the Qatar row erupted, the Islamic State attacked Iran — the first time it has ever done so — hitting the parliament building and the mausoleum of Iran’s founder, Ayatollah Ruhollah Khomeini. Hours later, the Kurdistan Regional Government in northern Iraq announced that it would hold an independence referendum on Sept. 25.

These events may have happened independently of each other, but together they represent a powerful shift. Qatar’s willingness to rebuke Saudi Arabia shows that Iran is growing stronger or that Saudi Arabia is growing weaker — or both. Turkey, meanwhile, sees this as an opportunity to support Qatar and position itself as the region’s leader. The Islamic State is going back to its roots as a highly effective insurgent organization as it loses territory in Iraq and Syria. And the Iraqi Kurds seem closer than ever to officially breaking apart Iraq. Simply put, the powers of the Middle East are realigning. 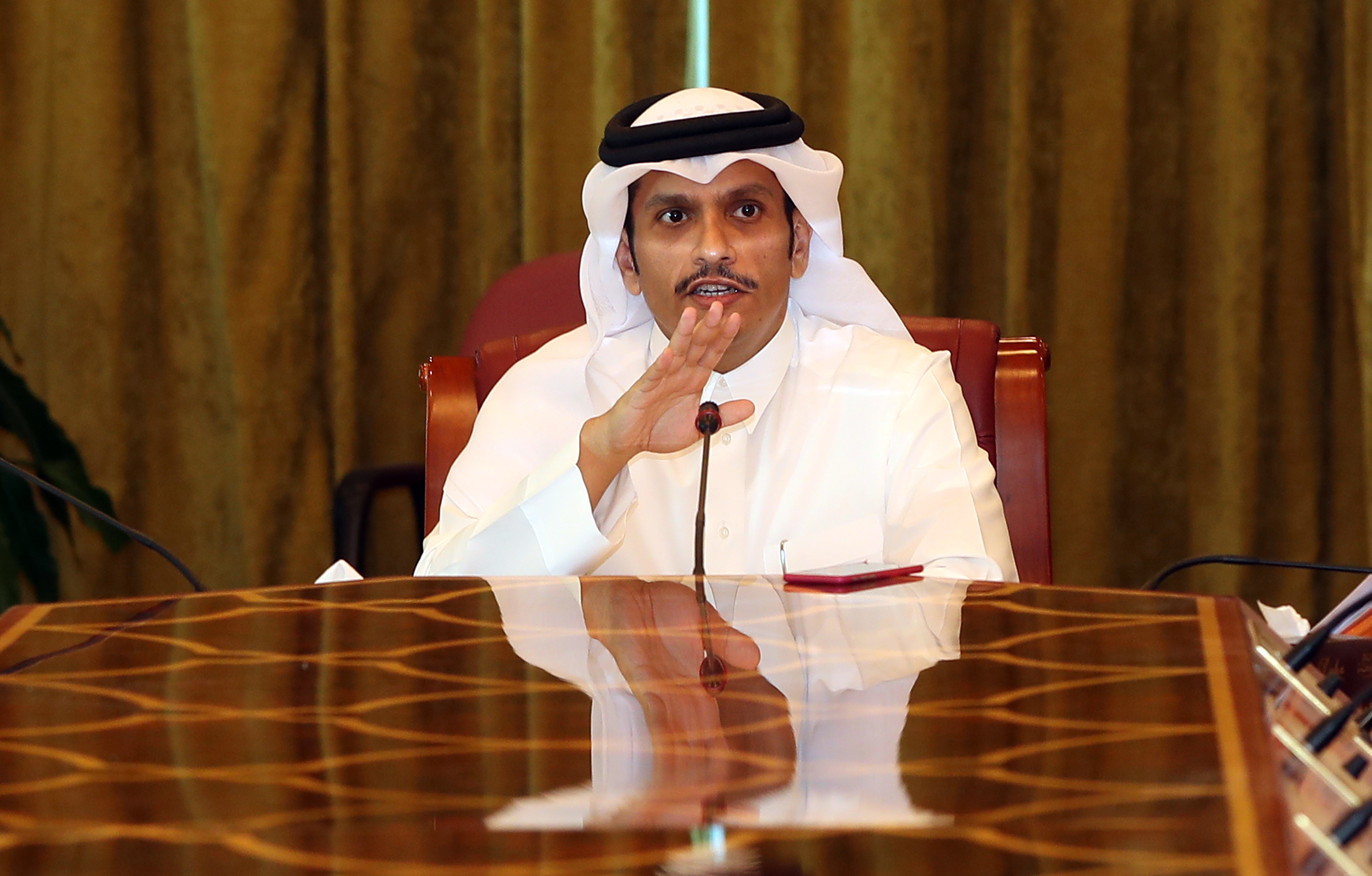 Qatari Foreign Minister Mohammed bin Abdulrahman al-Thani gives a press conference in Doha, on June 8, 2017. Qatar’s foreign minister rejected attempts to interfere in the country’s foreign policy and said a “military solution” to the country’s crisis with its Gulf neighbors was not an option. KARIM JAAFAR/AFP/Getty Images

Volatility Spreads to the Gulf

Arab states in the Persian Gulf have remained relatively stable, thanks to their oil wealth and small populations. But that is no longer the case. The drama with Qatar rightly made headlines this week, but it is indicative of a deeper problem. The Gulf Arab states are at odds over how to manage radical Sunni groups and Iran and its Shiite proxies. Oman, a non-Sunni state, has always been the outlier in the bloc and has had the closest ties to Iran. Kuwait, while close to the Saudis, has managed to stay neutral on various issues and is currently acting as a mediator in the Qatar dispute. Bahrain, a majority Shiite nation with a Sunni-controlled government, is completely dependent on the Saudis. That leaves the United Arab Emirates as the Saudis’ only other real partner.

The Arabian Peninsula’s relative calm is at risk, and Saudi Arabia was trying to prevent any further divisions by launching a diplomatic campaign against Qatar. It’s a risky maneuver, but it could pay off if it brings Qatar back into the fold and demonstrates how powerful a Sunni bloc of countries can be with Saudi Arabia at the helm. It could also backfire if Qatar remains defiant in front of the rest of the Arab Gulf states.

The Islamic State has been the center of gravity in the Middle East for years. But over the past year, it has been losing strategic territory in Iraq and Syria and now appears to be losing hold of its capital, Raqqa.

The loss of this territory will be a major blow. It knew that it would be unable to sustain its caliphate in the short term, but with the bigger picture in mind, the Islamic State will go back to its roots as an insurgent group carrying out terrorist and guerrilla attacks from ungoverned spaces in the Syrian and Iraqi deserts. The underlying social, political and economic conditions that allowed IS to emerge in the first place, meanwhile, will remain in place even if Raqqa falls, and if IS doesn’t exploit them, another group will.

As the Islamic State weakens on the battlefield, so too will the shared cause of those fighting the group. They will now fight among themselves as IS focuses on exploiting regional divisions, especially the conflict between Sunni and Shiite forces, to further weaken the Sunni Arab leadership.

On June 7, 12 people were killed and many more were injured in two attacks by six assailants with assault rifles and suicide vests. The Islamic State claimed responsibility, and the fact that it could carry out such attacks indicates that IS likely had been operating in Iran for a while.

IS pulled off these attacks at an opportune time, just three weeks after U.S. President Donald Trump visited Saudi Arabia and identified Iran as the main threat to the region. Around the same time, the Saudi king ruled out any dialogue with Iran and said the struggle against Iran has to take place on Iranian soil. There have also been major crackdowns on Shiites in Saudi Arabia and Bahrain.

From Iran’s point of view, the Saudis actually benefit from the Islamic State, which helps counter Iran and its Shiite allies in the region. Whether this is actually the case is immaterial. The Islamic State would like Iran to believe that this were so because it could lead to a confrontation between Tehran and Riyadh. Recent statements from Iran’s Islamic Revolutionary Guard Corps accusing Saudi Arabia of being behind the June 7 attacks would likely be welcomed by the Islamic State.

Iranian intelligence will try to neutralize IS elements in the country, though the Quds Force, a special unit of the Islamic Revolutionary Guard Corps responsible for overseas operations, may go further and try to retaliate against the Saudis for the attacks. Either way, these attacks have aggravated tensions between Iran and Saudi Arabia, and the Islamic State will do all it can to aggravate them more.

Kurdish groups, meanwhile, are taking advantage of the region’s blurred borders to create new ones of their own. The Syrian Kurds’ primary motivation in fighting the Islamic State is to secure land and U.S. support for an autonomous, if not independent, Syrian Kurdish state. Their distant cousins in Iraq are also pursuing sovereignty, threatening to break apart the Iraqi experiment once and for all.

Following the 2003 Iraq war, the government in Baghdad recognized an autonomous Kurdistan Regional Government in Iraq’s three northernmost provinces. Over time, the Iraqi Kurds expanded their influence south to include large parts of three additional Iraqi provinces, where they have territorial disputes with Iraqi Sunnis. The Shiite-dominated government, however, has long opposed greater autonomy for the KRG. The rise of the Islamic State in 2014, and particularly its capture of Mosul, actually helped the Iraqi Kurds because it weakened Baghdad and forced it to cooperate with the KRG to fight back IS in Sunni areas.

Emboldened by its progress, the KRG announced June 7 that it will hold an independence referendum on Sept. 25. Beyond this vote, the KRG’s path to independence remains unclear. Much depends on how the Turks and Iranians respond.

Turkey: Still on the Sidelines

Turkey, meanwhile, is watching all of this carefully. It opposes Kurdish independence, and its goals in Syria conflict with almost every other power in the region. Even so, beyond funding some proxy groups in Syria and creating a small corridor in the northern part of the country, it has stayed out of the fray. It prefers to let the Arabs fight among themselves until they are so weak that Turkish power becomes impossible to resist. Turkey is also dealing with domestic issues that prevent it from projecting power too far abroad.

The Qatar dispute, however, presented Turkey with an opportunity that it couldn’t pass up. Turkey is an ally of Qatar; they have a relationship the Saudis and other Arab states deeply resent. But the Arab states also need Turkey to counter Iran. The Arabs will have to accept Turkish influence as a balance to Iranian influence. Turkey is trying to act as a mediator in the crisis between the Gulf states, which could become a stepping stone for a wider Turkish role in Arab affairs. And to really demonstrate how much Turkish power has expanded, the Turkish parliament fast-tracked passage of a bill on June 7 to station 3,000 troops in Qatar.

To deal with the multiple challenges emanating from Syria, Turkey needs to position itself as the region’s leader. One tactic it is using is to support Sunni Islamists of the Muslim Brotherhood who are loyal to Turkey and therefore will support Turkish interests. The problem is that Saudi Arabia and Egypt do not want Turkey to be a leader. Iran may be the immediate threat, but Turkey as a hegemon is an equal if not greater threat in the long term.

It has been a heady week in the Middle East, full of important developments that are reshaping the geopolitics of the region. This will eventually calm down into a new normal as some of these issues lay dormant – but they are not going away, and there are more significant episodes than these to come.

Why Tajikistan Is Headed Toward Instability