The Islamic State was the world’s first jihadist group to make control of territory its primary objective. It succeeded for a time, holding and administering far more ground than any other jihadist group in Syria or Iraq – or anywhere else, for that matter. But now the world is closing in on the Islamic State, and even its capital is at risk.

The U.S.-backed Syrian Democratic Forces began an invasion of eastern Raqqa on June 6. They captured the neighborhood of al-Mashalab before IS stopped their advance. Meanwhile, Syrian army forces loyal to Bashar Assad crossed into Raqqa province and are now less than 50 miles (80 kilometers) west of Raqqa city. The Syrian army has also moved against IS in Aleppo province and outside of the city of Hama, and continues to push east from Palmyra toward the IS heartland. The Islamic State is reeling, no longer in a good position to defend its capital. That means its strategy must change, and along with it, our baseline assessment of its strategic imperatives in Syria.

In December 2015, GPF published a detailed study of the Islamic State as a territorial entity, not as a terrorist group or ideological movement. The geographic core of the Islamic State was identified as a thin but heavily populated area on both sides of the Euphrates River, extending from Raqqa to the city of Deir el-Zour. Defense of this core was the Islamic State’s primary geopolitical imperative. 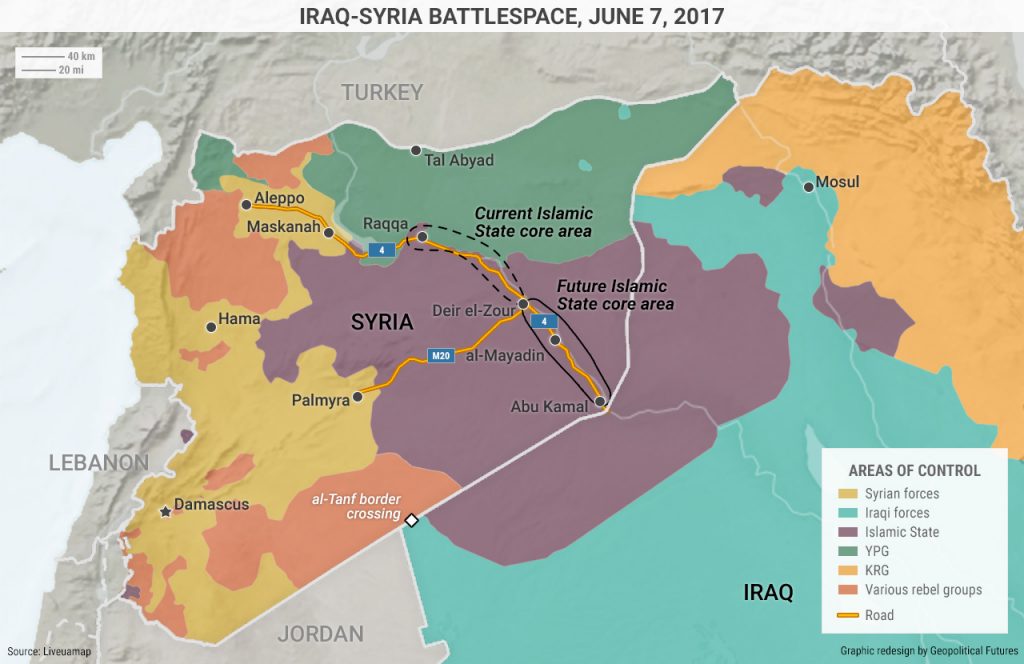 The Islamic State is in danger of losing control of this territory. GPF’s report identified four main avenues of approach toward the Islamic State’s core territory. U.S.-backed Syrian Kurds chose the fourth approach, moving south from Tal Abyad for a frontal assault on the IS capital. The Syrian Democratic Forces gathered to the north, east and west of Raqqa, though highway 4, which leads from the city’s southeast directly to Deir el-Zour, remains open to IS forces.

By itself, the SDF probably could not take Raqqa – at least not without immense difficulty. But Russian-backed Assad forces are also advancing on the city from the northwest, west and southwest. The combination of the two forces threatens to complete the encirclement of Raqqa and cut it off from the rest of IS territory. The Syrian army took Maskanah on June 4 and has stayed on the offensive, taking two villages in Raqqa province. On June 6, the Syrian army forced IS to retreat from areas in the eastern part of Hama province. And for the past few weeks, Syrian army forces have slowly been making their way up the M20 highway, which runs east from Palmyra toward Deir el-Zour. These forces have advanced about 20 miles in the past month, but they are still roughly 100 miles from Deir el-Zour.

IS has tried to fortify its positions around Palmyra, but Russian airstrikes have hit multiple IS convoys headed out of Raqqa toward Palmyra, with the latest announced by Russia’s Ministry of Defense on June 1. The near simultaneity of the airstrikes, the SDF’s announcement of its offensive on Raqqa and the three-pronged movement of the Syrian army suggest that there is some degree of coordination on this offensive between Assad’s forces and the SDF – and by extension, between the U.S. and Russia.

The two sides aren’t working together on all issues, however. On June 7, for example, the U.S. bombed an Iranian militia – basically a Russian proxy – that got too close to the al-Tanf border crossing between Jordan and Syria, where the U.S. is training Syrian rebels. Still, the assault on Raqqa, at least for now, appears to be a coordinated effort between the Islamic State’s main enemies. Their coordination is crushing any hope IS had to hold Raqqa. But IS has repeatedly shown it will withdraw from a fight on its own terms before it will lose. IS relies on religious ideology to ensure the loyalty of its soldiers, but its leaders have always been pragmatic on these matters. They prefer not to be martyrs.

So IS has to change its strategy, and there are some indications that it began to do so long before the SDF assault on Raqqa began in earnest. The Washington-based International Center for the Study of Violent Extremism made two key points in an April 3 report. First, the report noted that IS had begun moving key leaders and their families from Raqqa to al-Mayadin, a small city in the center of the Islamic State’s holdings. Second, the report said that in February and March, IS began transferring money to al-Mayadin. The accounts of Raqqa residents in the media also indicate that IS fighters have left in recent weeks. For that matter, that there are suddenly a bevy of sources for the media to talk to in Raqqa speaks to IS forces’ diminished control. 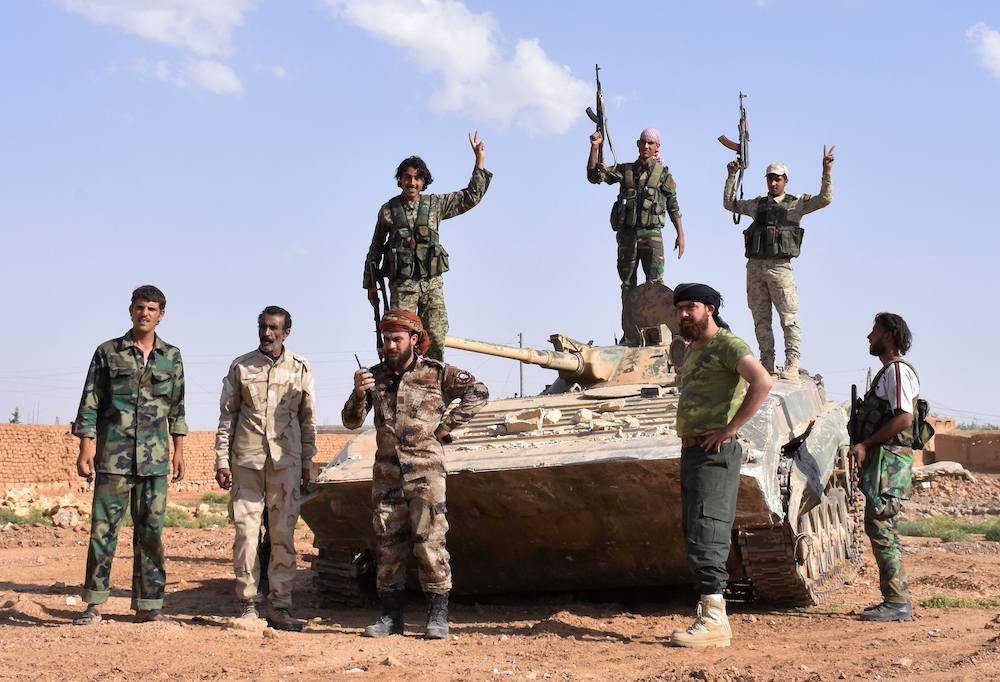 Syrian pro-government forces flash the sign for victory on top of a tank after taking control of the northern Syrian town of Maskanah from the Islamic State on June 5, 2017. GEORGE OURFALIAN/AFP/Getty Images

Another indication that IS has accepted the loss of Raqqa is the success SDF fighters have had thus far in the city. Within 24 hours of launching its assault, the SDF declared that it had full control over the eastern Raqqa neighborhood of al-Mashalab. Pictures and videos of SDF fighters appeared as well, suggesting that the Islamic State’s defense in that part of the city was light. IS defenses have tightened considerably since then, however. It appears to have withdrawn from al-Mashalab to take up a defensive position in a neighboring district, and the SDF has faced heavy resistance in the al-Sharqi and al-Jazra neighborhoods. The SDF claims to have killed 75 IS fighters in these clashes alone, but those numbers are impossible to confirm.

Even if IS has pulled the bulk of its forces out of Raqqa, taking the caliphate’s capital will be no small feat. It is in the Islamic State’s interest to keep the SDF and its allies focused on Raqqa for as long as possible. Doing so will keep attention off the areas farther into the Syrian desert, where the Islamic State is attempting to regroup. Raqqa is an urban area, which magnifies the defenders’ numbers and complicates U.S. airstrikes for fear of civilian casualties. Raqqa’s population is roughly a third that of Mosul – where Iraqi security forces are still struggling to assert complete control nearly eight months into the battle – so the SDF may make quicker progress than Iraqi forces have. The flip side, though, is that the SDF is not nearly as well trained, well equipped or large as the Iraqi security forces.

As for IS, the retreat toward Deir el-Zour is only a temporary fix – and a risky one at that. IS has administered its territory from Raqqa for years, and no matter how lithe and mobile the Islamic State is, its capacity to organize its operations will suffer. Moving toward Deir el-Zour gives IS strategic depth from the SDF and Assad government forces, stretching these forces’ supply lines even farther when they turn to their next IS targets. But it also brings IS close to the border with Iraq, where Iranian-backed Shiite militias have been consolidating gains in recent weeks. Whatever assurances Iraqi Prime Minister Haider al-Abadi has given that these militias won’t cross the border and attack IS targets can’t be reassuring for the Islamic State. Even if the militias don’t cross the border, the more defeats they hand IS in Iraq, the less room IS will have to maneuver.

Low on options, IS has put more resources toward guerrilla and terrorist operations, both in the region and outside it. It conducted a spate of coordinated terrorist attacks in Syria in late May, and it continues to carry out attacks in Mosul and other cities in Iraq. On June 7, IS carried out twin attacks on the parliament building and the mausoleum of Ayatollah Ruhollah Khomeini in Tehran, a new target for IS and a demonstration of its potential reach.

The Islamic State rose to power by taking advantage of sectarianism and a power vacuum. Attacking targets in Damascus, Tehran and Baghdad stokes sectarianism. Meanwhile, IS maintains its credentials in the fight against the West by planning and claiming attacks in places like Australia, the United Kingdom and France. The Islamic State’s weakness in Syria and Iraq significantly increases the potential for IS attacks in the West.

The Islamic State’s enemies have touted their successes against IS forces for years. In most of these cases, IS forfeited territory that wasn’t strategically important to the defense of its caliphate. Only now are the successes becoming significant. As they pile up, they’re straining the Islamic State and forcing it to adjust its priorities. The model GPF has used to benchmark action against IS has held steady for about a year and a half, but the situation is at a point where that model is becoming obsolete and the Islamic State’s imperatives must be re-evaluated.

It remains to be seen just how extensive the IS withdrawal from Raqqa was before the SDF operation began. In the meantime, as the media’s focus is on the SDF’s block-by-block progress, it will be important to watch for the Islamic State’s attempts to consolidate a more defensible position deeper in the Syrian desert and inflame sectarian strife by carrying out more terrorist attacks. We will also be monitoring whether the Islamic State’s enemies can sustain the initiative and keep it on its heels.