Geert Wilders, the nationalist candidate for prime minister of the Netherlands, lost the election on March 15. This has brought comfort to those who opposed him and his views on immigration and immigrants. It is odd that they should be comforted. Ten years ago, it would have been difficult to imagine that someone of his views would have won any seats in parliament. The fact that his party is now the second largest in the Netherlands, rather than an irrelevancy, should be a mark of how greatly the Netherlands – and Euro-American civilization – has changed, and an indication that this change is not temporary.

Wilders’ views are coarser than most. He called Moroccans scum and called for closing mosques in the Netherlands. But more alarming from my point of view is the inability of his enemies to grasp why Wilders has risen, and their tendency to dismiss his followers as simply racists. This comforts his critics. They feel morally superior. But paradoxically they are strengthening Wilders – and his allies in the rest of Europe and the United States. By willfully misunderstanding the movement and attempting to delegitimize the nationalist impulse, they make it impossible to shape a movement that cannot be resisted. 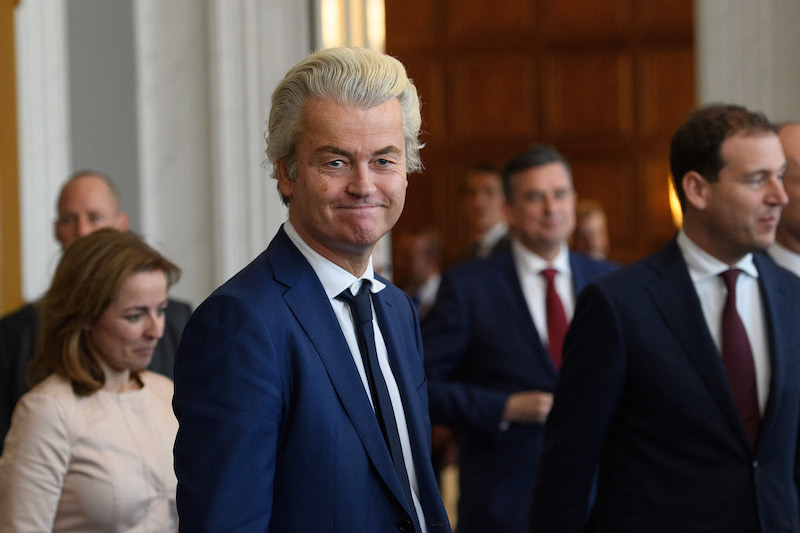 Party for Freedom leader Geert Wilders attends a meeting of Dutch political party leaders at the House of Representatives to express their views on the formation of the Cabinet, on March 16, 2017 in The Hague, Netherlands. Prime Minister Mark Rutte was re-elected for a third term in Wednesday’s general election, which also saw the Party for Freedom become the country’s second largest party. (Photo by Carl Court/Getty Images)

I have written before on the intimate connection between the right to national self-determination and liberal democracy. The right to national self-determination is meaningless without the existence of a nation. And a nation is impossible to imagine without an identity. There is something that makes the Dutch different from Poles, and both different from Egyptians. Nationalism assumes distinctions.

For Europe, Nazi Germany and the wars of the 20th century were seen as manifestations of nationalism. Without nationalism – or more precisely the obsession with national identity – these things would not have happened. One of the results of this was the European Union, which tried bafflingly to acknowledge the persistence and importance of the nation-state while also trying to reduce the nation-state’s power and significance. The European Union never abolished the differences between nations and their interests, because it couldn’t. In an embarrassed way, Europe acknowledged the sins of nationalism, while clinging to it.

Hitler taught us an important lesson. The balance between loving one’s own and despising the stranger is less obvious than we would like to think. Nationalism can become monstrous. But so can internationalism, as Stalin, Hitler’s soul mate, demonstrated. All things must be taken in moderation, but the need for moderation doesn’t abolish the need to be someone in a vast world filled with others.

Nationalism was the centerpiece of the rise of liberal democracies because liberal democracy was built around the liberation of nations. Liberals in Europe and America did not deny that, but they simply could not grasp that the nation cannot exist unless the people feel a common bond that makes them distinct. The claim was that it was legitimate to have a nation, but not legitimate to love it inordinately, to love it more than other nations, to value the things that made it different, and above all, to insist that the differences be preserved, not diluted.

Nationalism is not based on minor idiosyncrasies of food and holidays. It is the deep structure of the human soul, something acquired from mothers, families, priests and teachers. It is the thing that you are before you even understand that there are others. It tells you about the nature of the world, the meaning of justice, the deities we bow to and the obligations we have to each other. It is not all we are, but it is the root of what we are. Novelist André Malraux once wrote that we leave our nation in a very national way. He meant that even when we try to abandon our national identity, we do so in a uniquely national way. Sitting in a bar in Shanghai, I can tell who is an American and who isn’t. I know mine and those who are not mine.

If I say that I am an American, then I have said something of enormous importance. I am American and not Japanese or Dutch. I can admire these nationalities and have friends among them, but I am not one of them, and they are not one of us. I owe obligations to America and Americans that I do not owe to others, and others owe the same to their nations. It is easy to declare yourself a citizen of the world. It is much harder to be one. Citizenship requires a land, a community and the distinctions that are so precious in human life.

The problems associated with immigration must always be borne in mind. The United States was built from immigrants, beginning with the English at Jamestown. America celebrated immigrants, but three things were demanded from them, two laid down by Thomas Jefferson. First, they were expected to learn English, the common tongue. Second, they were expected to understand the civic order and be loyal to it. The third element was not Jefferson’s. It was that immigrants had to find economic opportunity. Immigration only works when this opportunity exists. Without that, the immigrants remain the huddled masses, the wretched refuse etched on the Statue of Liberty. Immigrants don’t want to go where no economic opportunities exist, and welcoming immigrants heedless of the economic consequences leaves both immigrants and the class they will compete with desperate and bitter.

In some countries, such as the United States, immigration and nationalism are intimately connected. Since economic opportunity requires speaking English, immigrants must learn English and their children learn loyalty to the regime. It is an old story in the U.S. But when there is no opportunity – as in many European countries – assimilation is impossible. And when the immigrant chooses not to integrate, then something else happens. The immigrant is here not to share the values of the country but as a matter of convenience. He requires toleration as a human, but he does not reciprocate because he has chosen to be a guest and not a citizen in the full sense of the term.

For the well-to-do, this is a drama acted out of sight. The affluent do not live with poor immigrants, and if they know them at all, it is as servants. The well-off can afford a generous immigration system because they do not pay the price. The poor, who live in neighborhoods where immigrants live, experience economic, linguistic and political dislocation associated with immigration, because it is the national values they were brought up with that are being battled over. It is not simply jobs at stakes. It is also their own identities as Dutchmen, Americans or Poles that are at stake. They are who they are, and they battle to resist loss or weakening of this identity. For the well-to-do, those who resist the immigrants are dismissed in two ways. First, they are the poorer citizens, and therefore lack the sophistication of the wealthy. Second, because they are poor, they are racists, and nationalism is simply a cover for racism.

Thus, nationalism turns into a class struggle. The wealthy are indifferent to it because their identity derives from their wealth, their mobility and a network of friends that go beyond borders. The poor live where they were born, and their network of friends and beliefs are those that they were born into. In many cases, they have lost their jobs. If they also lose their identity, they have lost everything.

This class struggle is emerging in Euro-American society. It is between the well-to-do, who retain the internationalist principles of 1945 reinforced by a life lived in the wider world, and the poor. For this second group, internationalism has brought economic pain and has made pride in who they are and a desire to remain that way a variety of pathology.

The elite, well-to-do, internationalists, technocrats – call them what you’d like – demonize poorer members of society as ignorant and parochial. The poor see the elite as contemptuous of them and abandoning the principles to which they were born, in favor of wealth and the world that the poor cannot access.

It is about far more than money. Money is simply the thing that shields you from the effect of the loss of identity. The affluent have other ways to think of themselves. But the real issue goes back to the founding principles of liberal democracy – the right to national self-determination and, therefore, the right to a nation. And that nation is not understood in the EU’s anemic notion of the nation, but as a full-blooded assertion of the right to preserve the cultural foundations of nationhood in the fullest sense.

In other words, the nationalism issue has become a football in a growing class struggle between those who praise tolerance but do not face the pain of being tolerant, and those who see tolerance as the abandonment of all they learned as a child. I began by talking about Hitler, whom no reasonable and decent person wants to emulate. Yet, what made him strong was that the elite held his followers in contempt. They had nowhere else to go, and nothing to lose. Having lost much in World War I and the depression, they had nothing left but pride in being German. And the scorn in which they were held turned nationalism into a monstrosity.

Scorn and contempt are even more powerful a force than poverty. Liberals are sensitive to the scorn directed at immigrants, but rarely to those who must deal with immigration not as a means of moral self-satisfaction, but in daily life. This is not about immigration or free trade. It is about the nation, first loves, and the foundations of liberalism.

Toward a New Geopolitical Model