From this, the European Union emerged as a moral project, along with the idea that a re-emergence of nationalism would return Europe and Euro-American civilization back to barbarism. Historically, that may be a persuasive argument. But it fails to understand that nationalism – however distorted it might become – is the root of liberal democracy, not only historically, but also morally. The two concepts are intellectually inseparable. 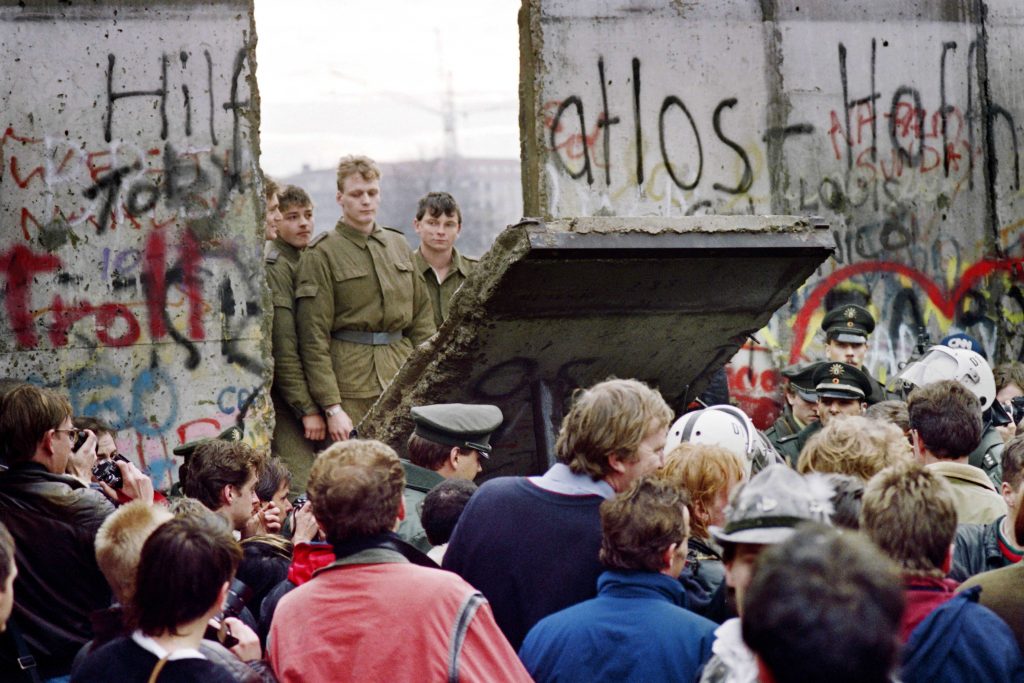 West Berliners crowd in front of the Berlin Wall on Nov. 11, 1989 as East German border guards demolish a section of the wall to open a new crossing between East and West Berlin, near Potsdamer Square. GERARD MALIE/AFP/Getty Images

Liberal democracy as a political doctrine arose in the 18th century as a challenge to monarchy. At the time, monarchies were based on the idea that kings and emperors had a divine right to rule. Maps of 18th century Europe, and even before, show the outcomes of this approach. The holdings of a monarch or lesser nobility were built by war, money and marriage, and the subjects likely consisted of many nations. Many nations, in turn, were divided between the different monarchies. Therefore, kingdoms and nations did not necessarily coincide, and regimes were not connected to the people, neither in theory nor in practice.

Nineteenth and 20th century history involved the struggle of nations to extract themselves from monarchies and empires to take their fragmented parts and make them whole. A European uprising in 1848 was a result of nations seeking the right to be free from empires. For the most part, they failed at this goal but succeeded in another: Nationalism became a moral imperative. Nations emerged from the chaos of World War I after four empires collapsed. To a great extent, this was due to the guidance of Woodrow Wilson at Versailles. Then, in 1991, more nations emerged from the collapse of the Soviet empire. After World War II, as European empires collapsed, nations – and frequently entities pretending to be nations – emerged from the rubble to assert their right to national self-determination. Whatever Adolf Hitler and Benito Mussolini would have done, advocates of liberal democracy celebrated the global emergence of nations that would govern themselves.

A nation is a group of people who share history, culture, language and other attributes. It is the existence of a common identity, a coherent sense of self and nationhood that make self-government possible, because it is that sense of self that permits self-government. A random collection of people without a core set of shared values cannot form a coherent regime, because nothing would hold the regime together or prevent internal chaos. The principle of the right to national self-determination can be universalized, but the practice of national self-determination must be rooted in the nation. Without this commonality, a nation could tear itself apart. We saw this happen in Yugoslavia and when Czechs and Slovaks gracefully divorced. We saw the chaos of the former European empires as nations once divided from each other by imperial borders and forced to live together with strangers were enveloped in constant turmoil. Without people who have self-identity, the right to self-determination cannot exist. Without the democracy that flows from it, liberal democracy cannot exist.

Liberal democracy makes two core assertions. First, there is a right to national self-determination. Second, this self-determination must manifest in a type of popular rule, and the people, in ruling themselves, have the right to select and approve the form and substance of government. The important point is that democracy is comprehensible only through the prism of the nation.

The centrality of the nation derives from its irrelevance to the old regime. Monarchies did not recognize the right of people to rule themselves, and they didn’t see the concept of a people as important. To challenge despotism, a political instrument that could be wielded as a powerful weapon had to be created. From a political point of view, the only coherent political force to oppose monarchs was the nation. The American Revolution was the rising of a nation crafted as colonies against the English monarch. The French Revolution was the rising of a French nation, as fragmented as it was, against the French monarch.

Contemporary tension in liberal democracy is not with the nation, but rather between democracy and liberalism. If people have a right to self-determination, then they have the right to elect leaders with values they prefer or share. The problem is that some people will object to leaders being selected who violate the principles of liberalism.

The battle is between the right of national self-determination on one side, and a faction of people who are appalled at the path the people have chosen on the other side. Nation after nation is being torn apart by those who embrace liberal democracy being usurped by others making democratic choices.

The American founders understood this problem and sought to resolve it by limiting democracy in a number of ways. The most important of these limitations was the Constitution, and its purpose was to define how the state works and checks itself, what inviolable rights all citizens have, and what system would make changing the Constitution enormously difficult. The issue with a constitution is always whether the people will respect it and whether tyrants will overturn it.

Democracy and liberalism live in dangerous tension with each other. Democracy can destroy liberalism if the majority wills it. And liberalism has a tendency to want to limit democracy if it reaches decisions that are offensive to it. The key to a liberal democracy is a powerful constitution – powerful in the sense that the people, over generations, respect it with an awe approaching worship.

The point here is that tension between nationalism and liberal democracy is not what haunts us today. Rather, what haunts us is the tension between liberal principles and democracy. The only thing that can contain that tension is a constitution that brooks no challenge. Without that, everything breaks down. In the end, designing a constitution is the most fundamental decision a self-governing nation must make. Of course, the constitution must be worthy of its authority.

What We’re Reading: US Power and Nationhood

The Struggle to Invent Qatari Nationalism